2.1. Curve Equation of the South Roof of a Solar Greenhouse

2.3. Solar Radiation Entering a Solar Greenhouse through the South Roof

2.4.1. Evolution of Beam Radiation inside the Solar Greenhouse

Consider the lighting roof as a radiation light-source. The light-source emits beam radiation and diffuse radiation into the solar greenhouse. The beam portion reaches the internal surfaces along the sunray’s path. In the rectangular coordinate system established in Section 2.1, the path equation of a sunray going through an arbitrary point p inside the greenhouse can be expressed as follows: where k denotes the slope of the sunray and can be expressed as k(t) = tan h(t)/cos (γ(t) − γG) in the greenhouse’s cross-section; xp and yp denote the coordinates of the arbitrary point p.
By solving the sunray’s path equation (Equation (23)) and the curve equation of the south roof (Equation (4)) simultaneously, the corresponding incidence point of an interior receiving point can be found along the south roof. If the location of the corresponding incidence point is outside the interval of the lighting section curve, the beam radiation does not fall on the considered point; thus, shadowing occurs. By contrast, once the point receives beam radiation, the beam radiation intensity Ibin can be calculated based on the transmitted beam radiation intensity at the corresponding incidence point and the relation between the slope angles of the surface elements representing these two points. Taking a point on the north wall’s inner surface as an example, Ibin can be expressed as: where βw is the tilting angle of the north wall’s inner surface.
From experiences with many Chinese solar greenhouses designs, it is suggested that, when the lowest monthly average outside temperature is less than 0 °C, the north wall should receive as much solar beam radiation as possible between 10:00 and 14:00 each day, to ensure sufficient heat storage [38]. From Figure 2, it is found that the shadow falling on the greenhouse’s internal surface is mainly caused by the north roof and the thermal blanket-covered section of the south roof. In a practical application, the length of the opaque north roof is fixed, while the length of the thermal blanket-covered roof is changed: the blanket can be opened and closed. The opening and closing time depend upon both the external temperature and solar radiation conditions [25]. During the lighting hours, given that the rolled-up thermal blanket occupies a certain area, 0.8 m horizontally on the top of the south roof are set aside in accordance with the common solar greenhouse design standard [38]. Therefore, the shadow region, which changes with time, can be determined by tracing the impact point of the sunray going through the moving point at the end of the thermal blanket. Then, the dynamic light region on the north wall that can directly receive the beam radiation can be obtained.

2.4.2. Evolution of Diffuse Radiation inside the Solar Greenhouse

2.4.3. Evolution of Multi-Reflective Radiation inside the Solar Greenhouse

4.1. Seasonal Spatial Distribution of the Solar Radiation in the Solar Greenhouse That Determines the Greenhouse Planting

Because there is no auxiliary lighting and heating, solar greenhouse cultivation still partially depends on the natural environment. In particular, the seasonal variation of the climate conditions significantly influences the crop planting in the solar greenhouse. Light in a solar greenhouse is weaker than on the outside and is determined by the periodic external solar radiation variations with a cycle of a year; it is also affected by the greenhouse envelope, which can be reflected by the spatial distribution of the solar radiation.
The calculation model established in this study can be applied to simulate and predict the light environment of a solar greenhouse accurately and conveniently. In this section, a case study based on the established solar greenhouse light environment model is conducted to investigate the annual dynamic spatial distribution of the solar radiation of a solar greenhouse in Jiuquan city, with the aim of guiding the planning of crops planting and thereby exploiting the maximum possible entering solar energy. The studied solar greenhouse has the same design parameters as the experimental solar greenhouse described in Section 3. Four typical solar terms, namely the vernal equinox (20 March), summer solstice (21 June), autumn equinox (23 September), and winter solstice (22 December), are selected to represent the external solar radiation variation in a year. The summer solstice has the maximum daily total solar radiation of a year, while the winter solstice has the minimum daily total solar radiation in the northern hemisphere. The simulated spatial distribution of the average solar radiation intensity during the lighting hours for the studied solar greenhouse is presented in Figure 6.
It can be observed that a shadow exists in the region near the north roof and north wall for all four solar terms; the largest and smallest shadow areas appeared in the summer and winter solstices, respectively. The shadow results from the opaque north roof and the thermal blanket covering the south roof, both of which act as shields against solar beam radiation. The change in the shadow area is expected owing to the solar altitude variation in the northern hemisphere. In the summer solstice, on the 2.0 m-height horizontal plane representing the commonly highest crop canopy, the projected shadow occupies a width of 1.6 m in which the average solar radiation intensity is only 38.42 W/m2 (3472 lux), which is significantly lower than that in the region with no shadow and is particularly disadvantageous for crops growth. For the region with no shadow, a high-intensity light region appears near the south roof with a solar radiation intensity reaching 482.12, 544.22, 433.12, and 325.93 W/m2, in the four solar terms from spring to winter, respectively. Then, the solar radiation intensity distributions exhibit an obviously decrease from the greenhouse center to the side near the north wall on the cross-section, falling to 410.28, 520.16, 390.10, and 218.16 W/m2, respectively. Along the vertical direction, a small solar radiation intensity variation in vernal equinox, summer solstice, and autumn equinox are observed; whereas in the winter solstice, a relatively large variation is observed within an approximately 2.5 m from the north wall; in this case, the solar radiation in the upper space is 53.9 W/m2 lower than that in the bottom on average. This is mainly caused by the nonuniform beam radiation intensity and beam transmittance along the south roof.
After converting the solar radiation intensity into illuminance using Equation (32), the average illuminance within the space required for crops growth is found to range between 42,000 and 50,000 lux in the entire greenhouse span in the vernal equinox, between 54,000 and 57,200 lux within 8.0 m from the bottom of the south roof in the summer solstice, between 40,000 and 45,000 lux and 22,000 and 33,500 lux in the entire span in the autumn equinox and winter solstice, respectively.
Every crop has an appropriate illuminance range: the minimum value is defined as light compensation point and the maximum is light saturation point. When the light intensity is lower than the light compensation point, the crop photosynthesis is weak and the organics could hardly be accumulated within the crop body. When the light intensity is higher than the light saturation point, it will destroy the chlorophyll and chloroplast membrane and will result in photoinhibition [42]. When the light intensity is within the appropriate range that the crop demands, crop can growths healthily. For a given solar greenhouse, its annual spatial dynamics of solar radiation can be used to determine the reasonable crop varieties and planting seasons based on the lighting demands of different crops, thereby optimizing the solar greenhouse planting pattern and enhancing the production efficiency. Regarding the studied solar greenhouse located in the Hexi corridor, some recommendations can be made for its crop planting: the light-demanding crops requiring an illuminance in the range of 42,000–57,200 lux, such as tomatoes or watermelons [43,44], can be planted in spring and summer; the low light-tolerating crops that require an illuminance in the range of 25,000–40,000 lux, such as cucumbers or peppers can be planted in autumn and winters [45,46]; and the crops that require a moderate illuminance and a long sunshine exposure, such as zucchinis that need 40,000–50,000 lux of illuminance and 8–11 h of light per day [47], should be planted in spring and autumn. Additionally, when the solar greenhouse is utilized in summer, some supplementary lighting measures should be taken to improve the light environment in the low light region near the north wall.

4.2. Optimizing the Regulation of the Solar Greenhouse Light Environment

4.2.1. Effect of the Interior Multi-Reflection on the Light Environment of the Solar Greenhouse

4.2.3. Thermal Blanket-Covered Length on the South Roof during the Lighting Hours

(1)
The solar greenhouse light environment model established in this study is valid because the simulated and measured results are consistent for different weather conditions. The MPE was calculated to be 1.67% for clear sunny weather and 10.30% for cloudy weather, and a satisfactory determination coefficient R2 of 0.9756 between the simulated and measured results was obtained for the established model.
(2)
The varying slope angle along the curved south roof results in a nonuniform beam radiation intensity and beam transmittance on the south roof. This leads to a significantly complex light environment inside the solar greenhouse. Generally, the spatial distribution of solar radiation exhibits a decrease in both south-to-north and bottom-to-top directions within a solar greenhouse.
(3)
The seasonal spatial distribution of the solar radiation in a solar greenhouse is quantitatively investigated with the established model. The results suggest that the solar greenhouse can be used to plant crops that require an illuminance in the range of 42,000–57,200 lux in spring and summer and crops that require an illuminance in the range of 25,000–40,000 lux in autumn and winter.
(4)
Increasing the inner surface reflectance of the north wall by whitewashing enhanced the interior refection. The north roof with high inner surface reflectance is a supplementary lighting component, which helps effectively improve the light environment of the low light region, with average increases in the solar radiation intensity of 18.96 W/m2 (6.8%), 6.78 W/m2 (2.6%), 8.84 W/m2 (3.5%), and 11.98 W/m2 (5.0%) for the 0, 1.0, 2.0, and 3.0 m height-planes, respectively, in the region within 3.0 m from the north wall.
(5)
Between 15 January and 20 March, the thermal blanket covered-south roof with a length of zero in the lighting hours increases the cumulative solar radiation availability for the north wall by 0.77 and 1.75 GJ/m along a one-meter section along the east-west orientation; this is 14.7 and 41.1% higher than when the thermal blanket occupies a horizontal length of 0.8 and 1.5 m, respectively, on the south roof.

This research is financially supported by the State Special Fund for Agro-Scientific Research in the Public Interest (201203002) and the Special Fund for Science & Technology Innovation and Development Guided by Gansu Province (2018ZX-02). 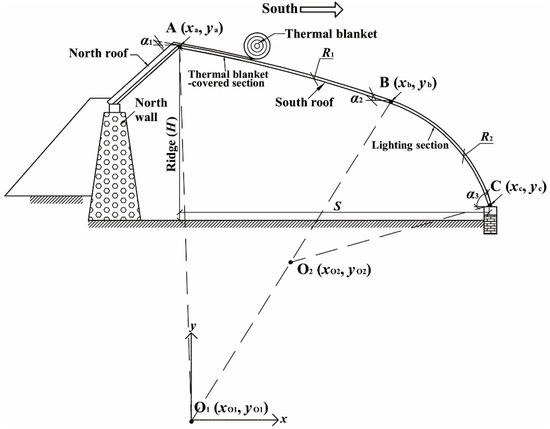 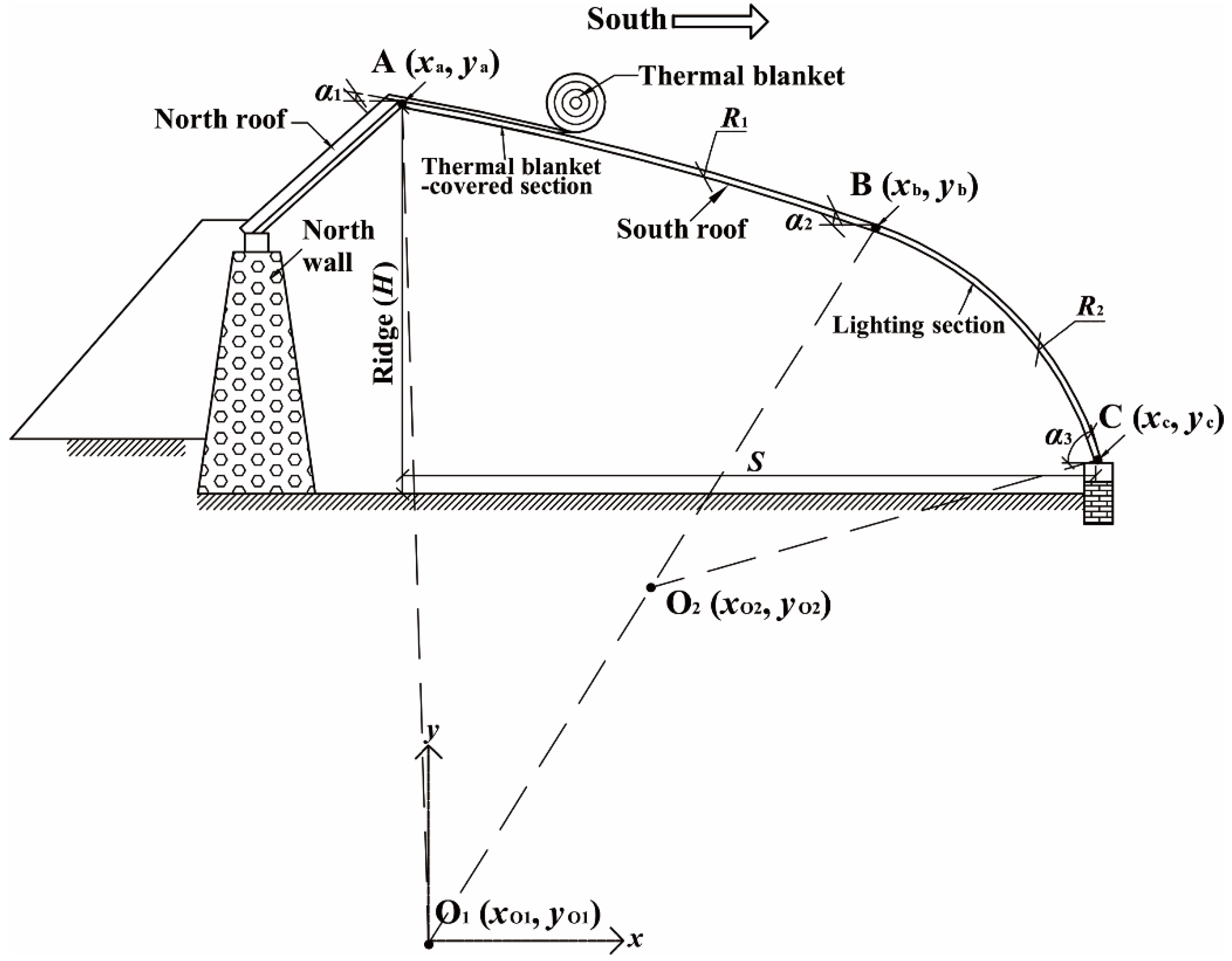 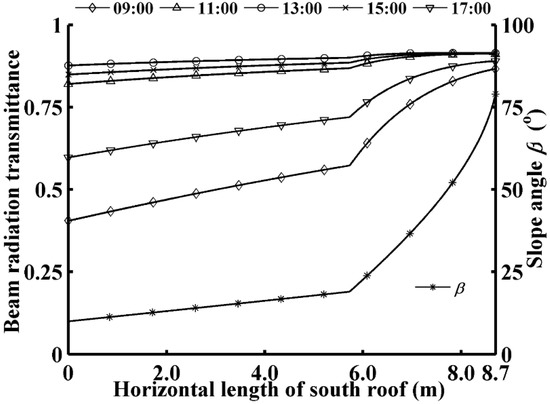 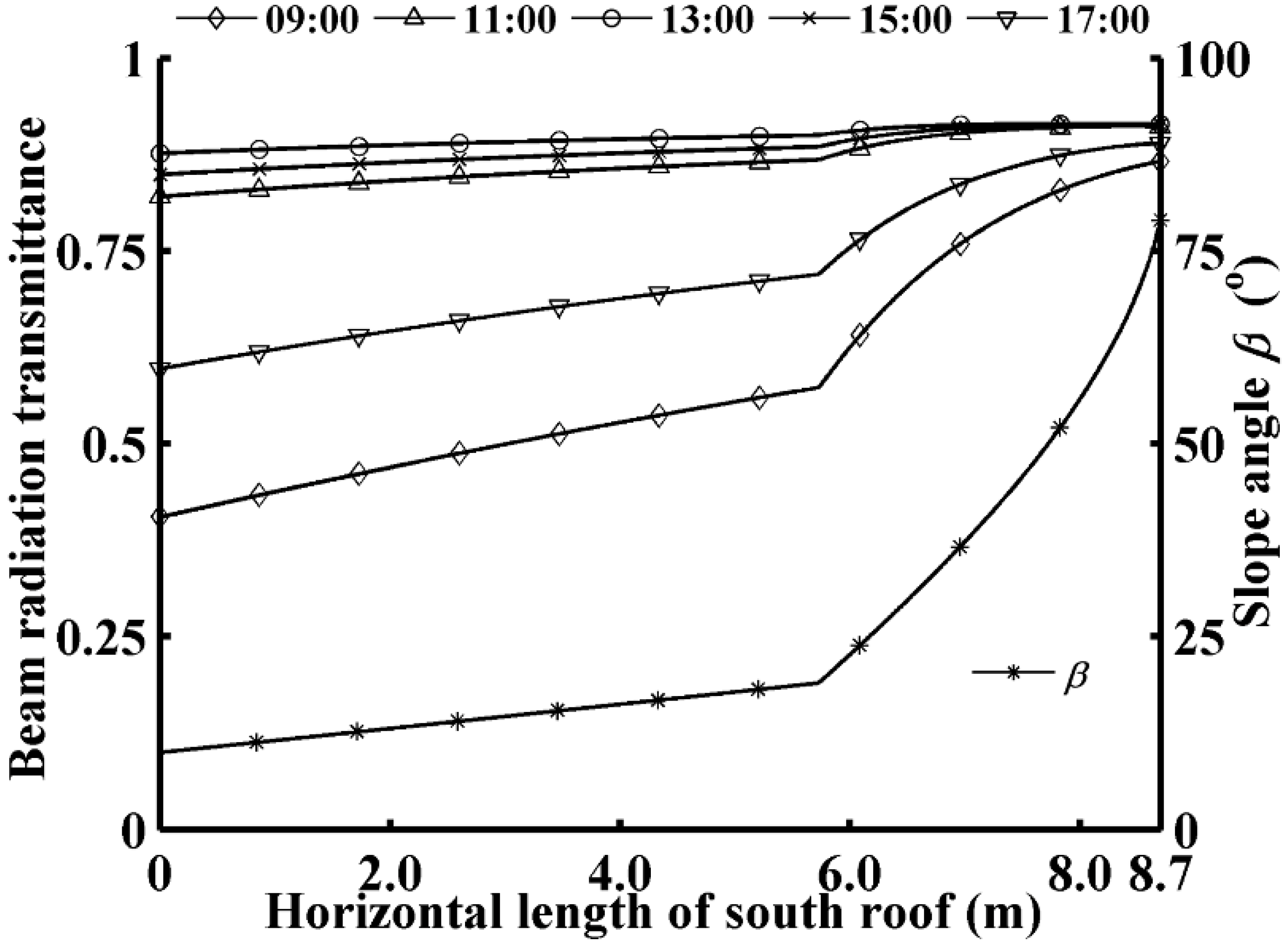 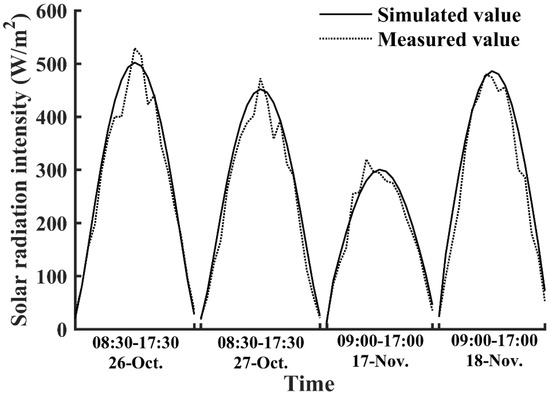 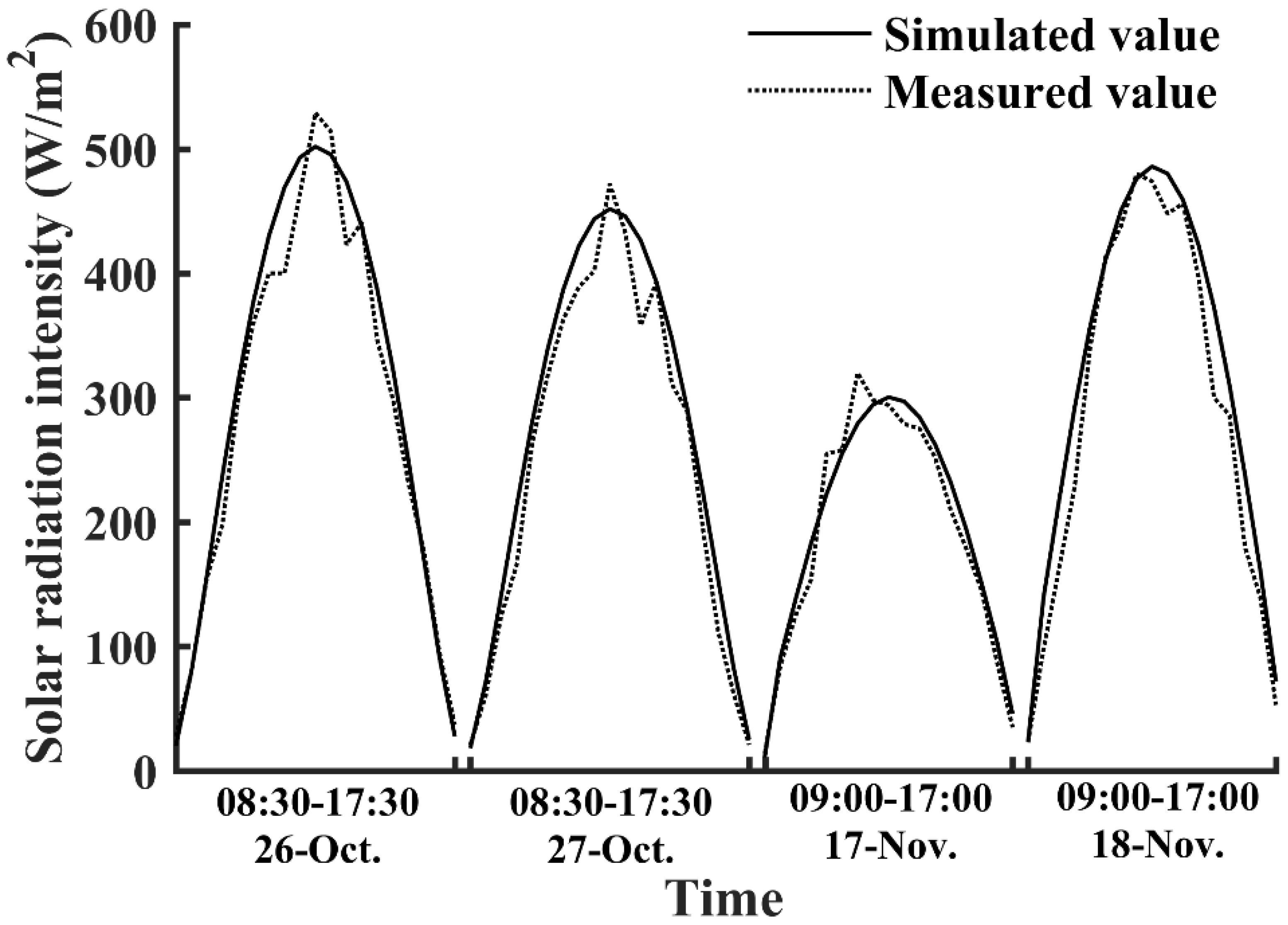 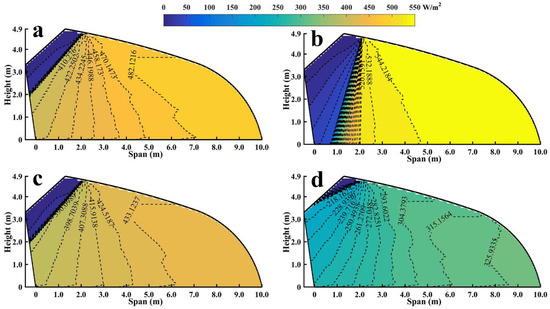 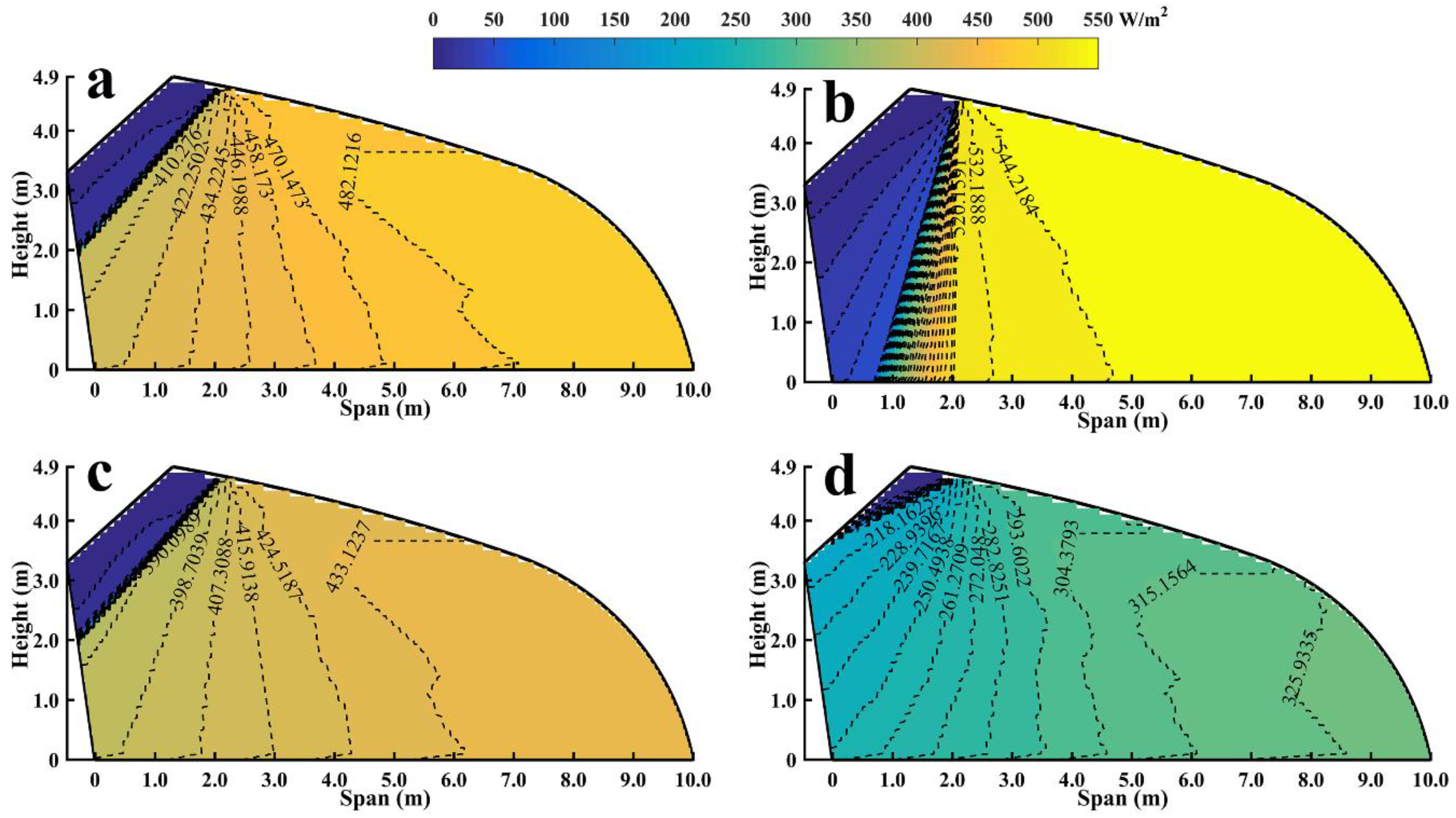 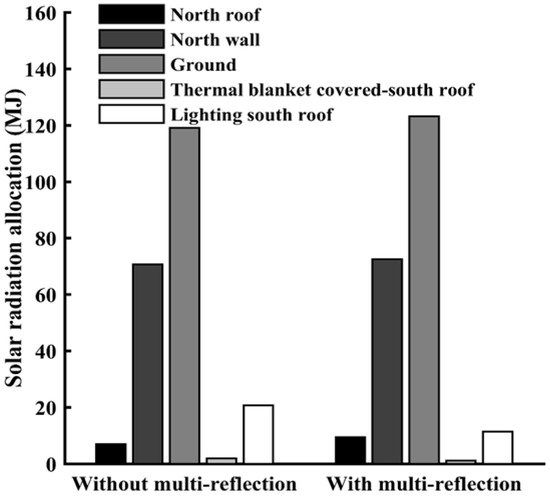 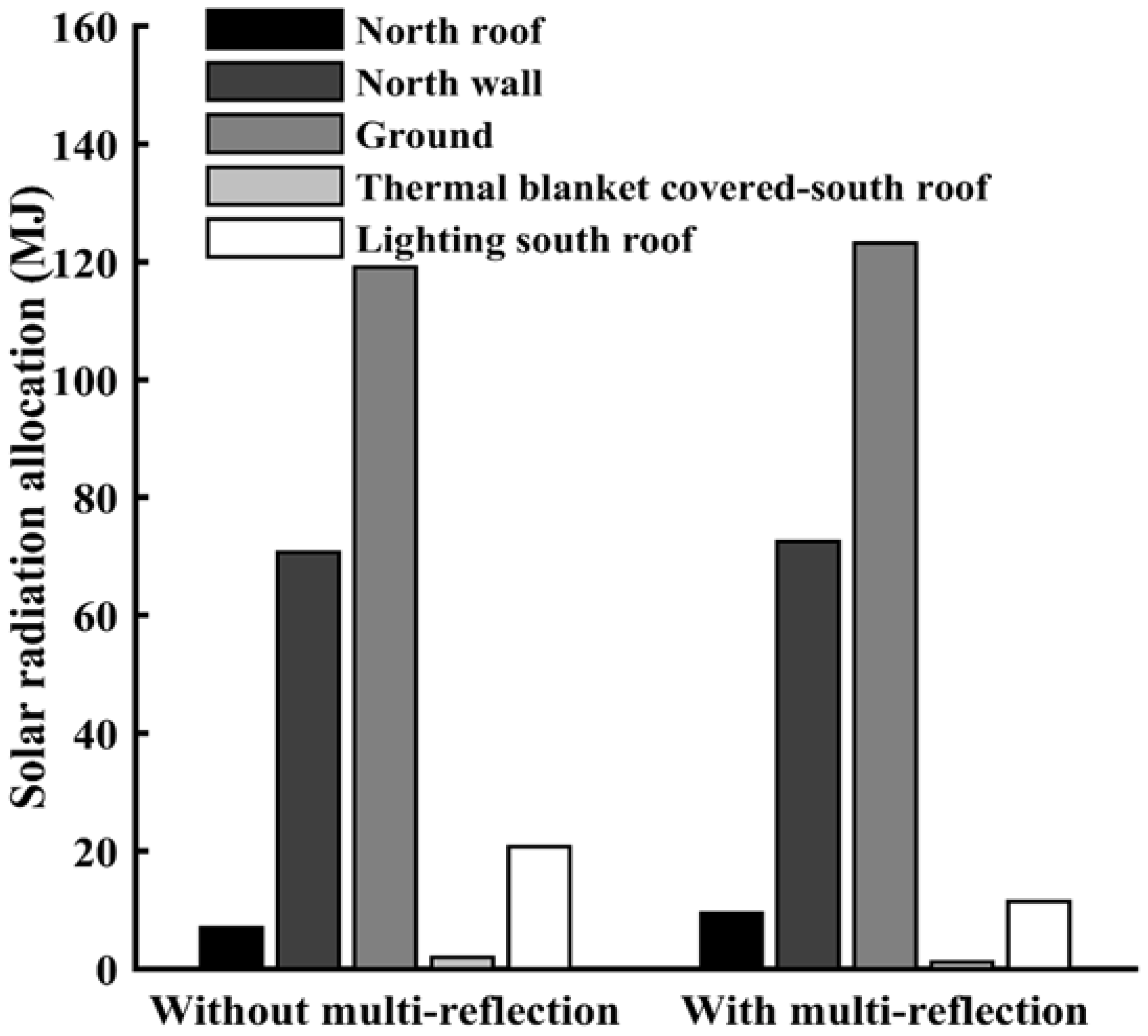 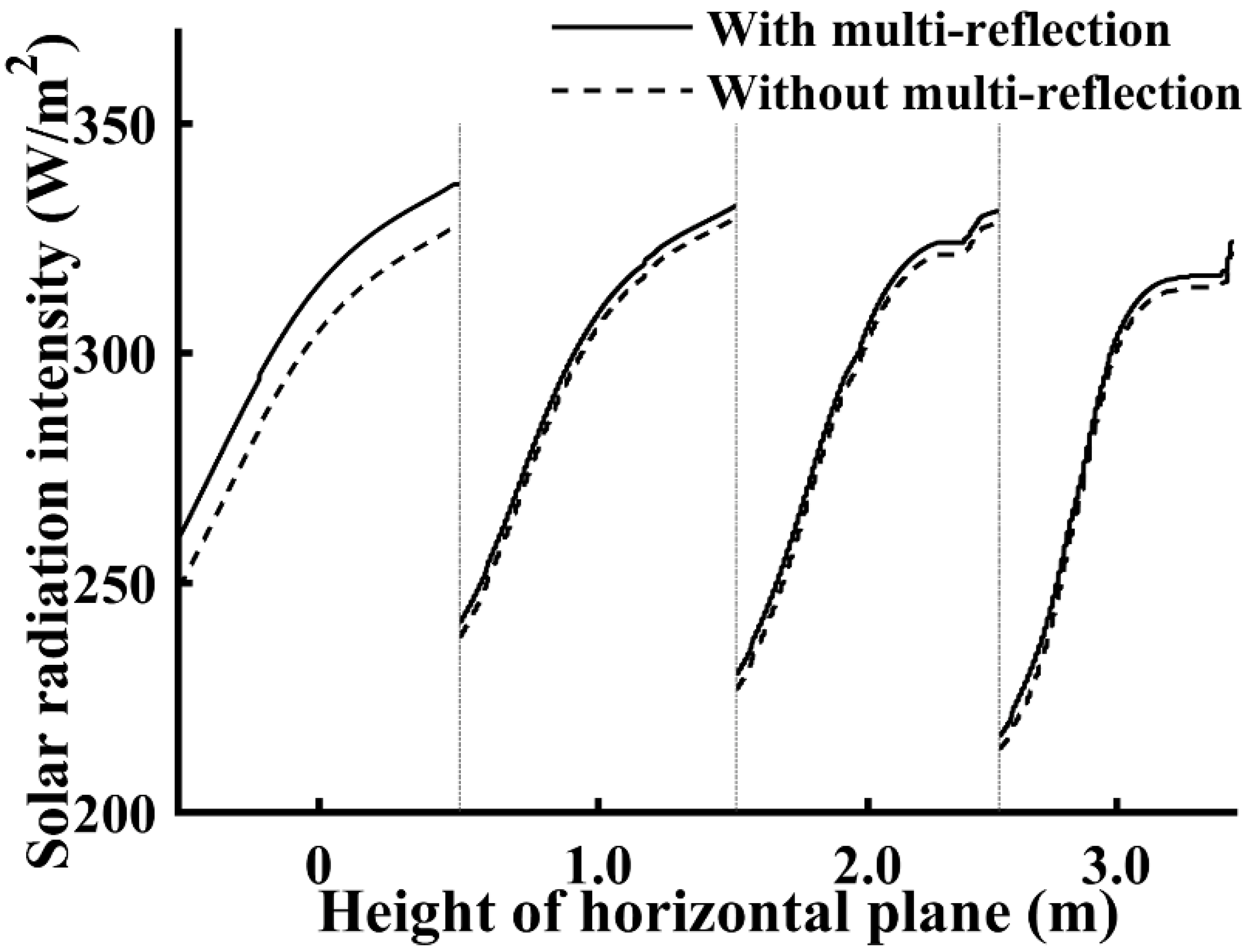 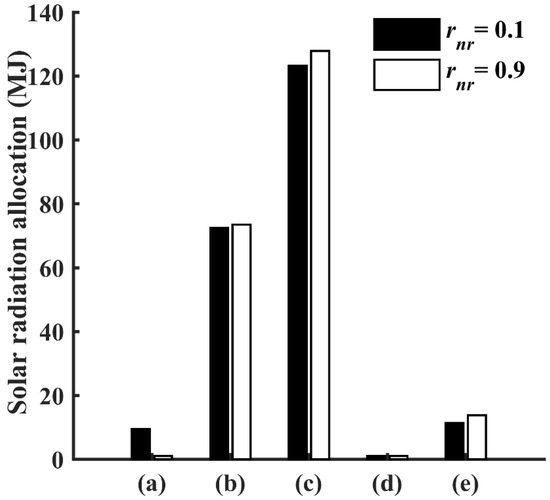 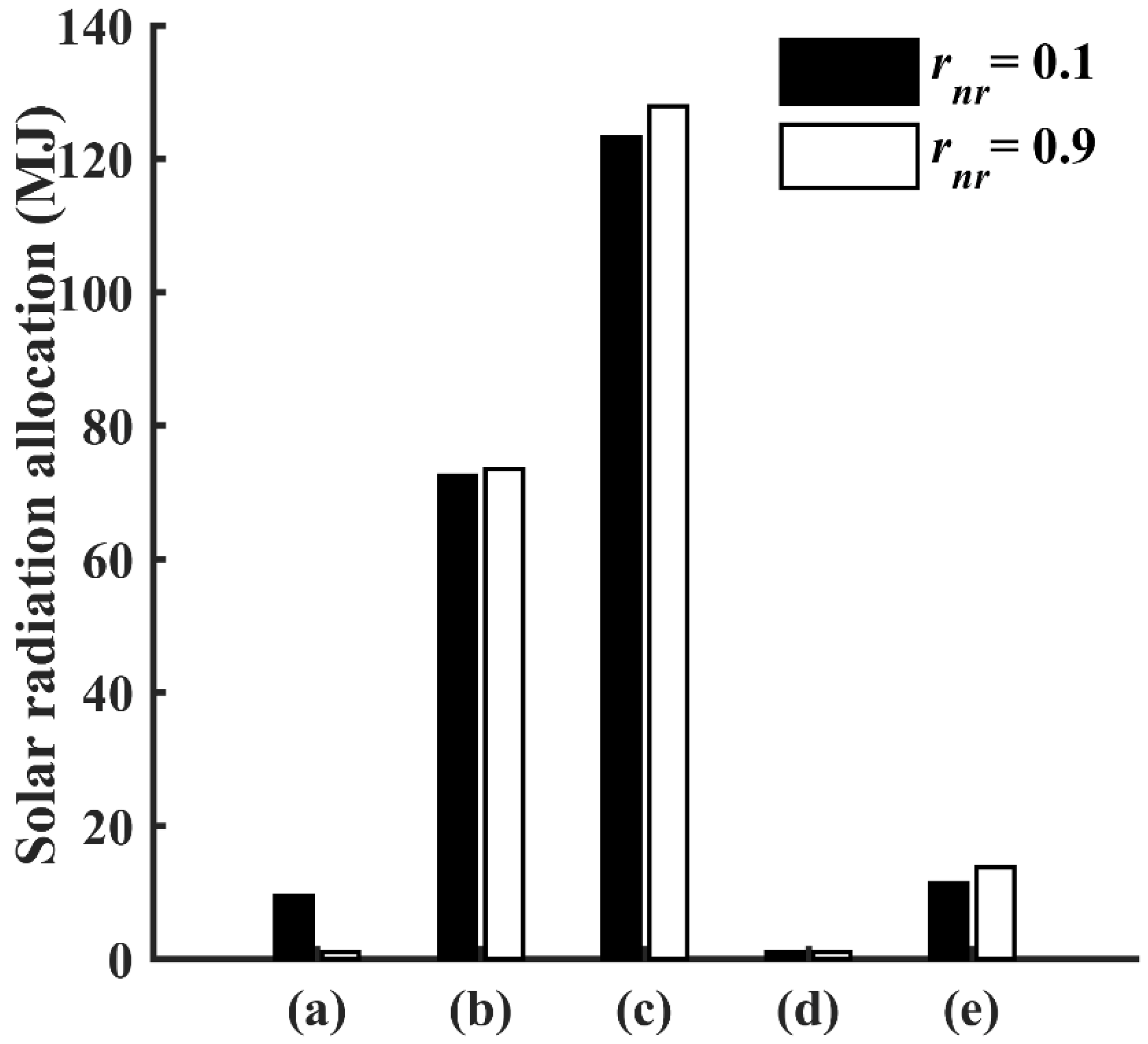 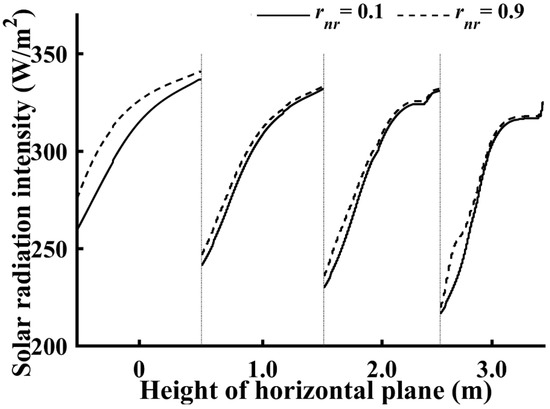 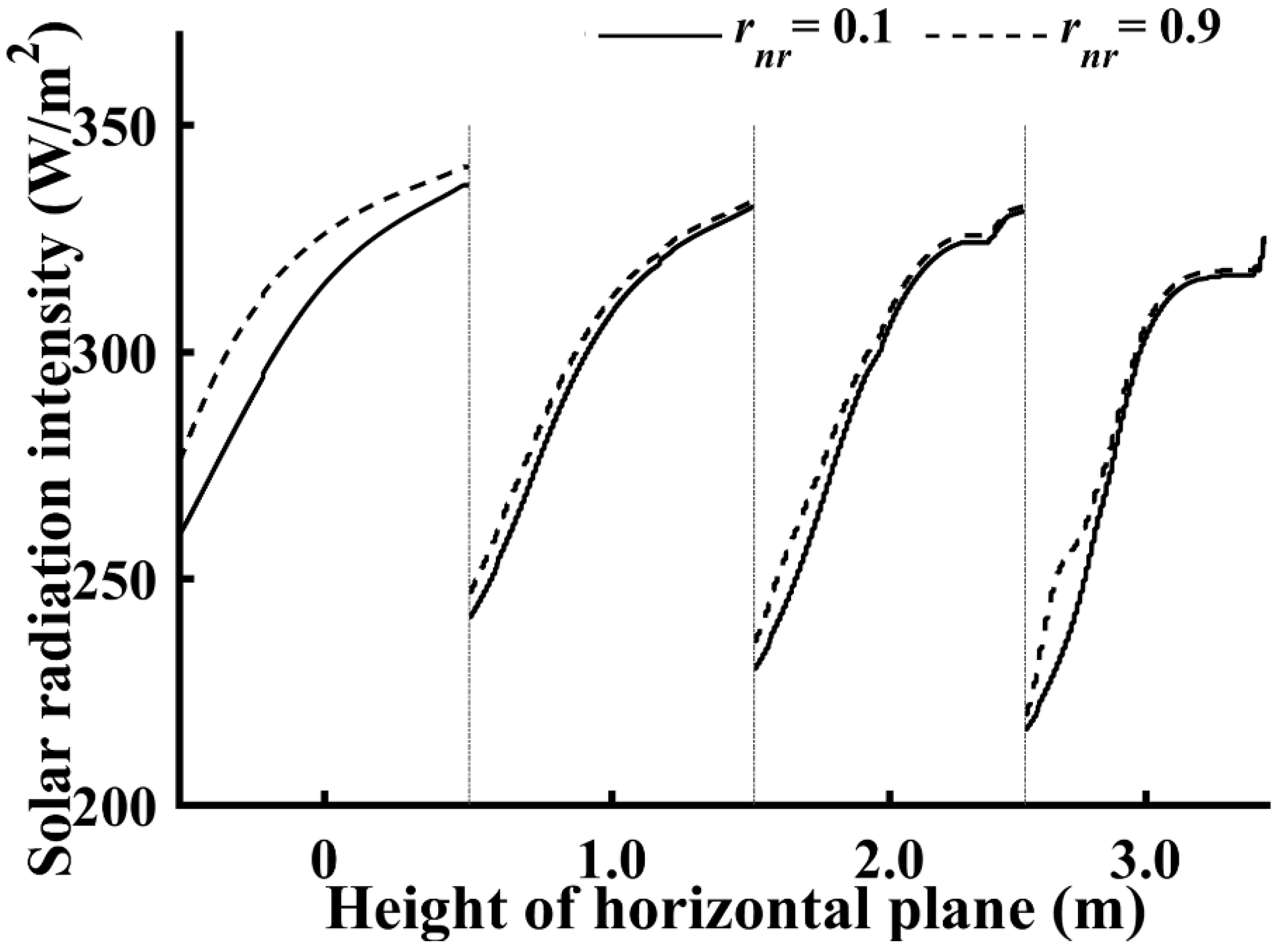 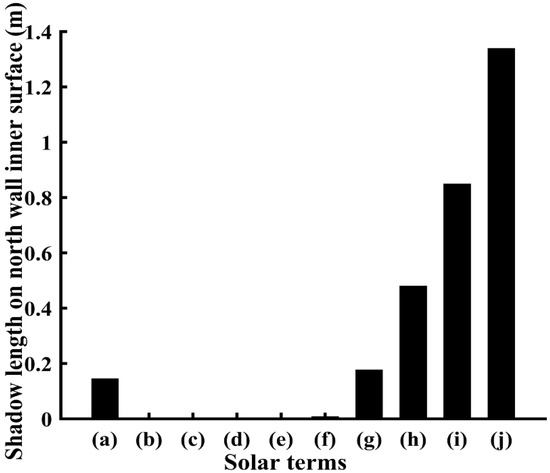 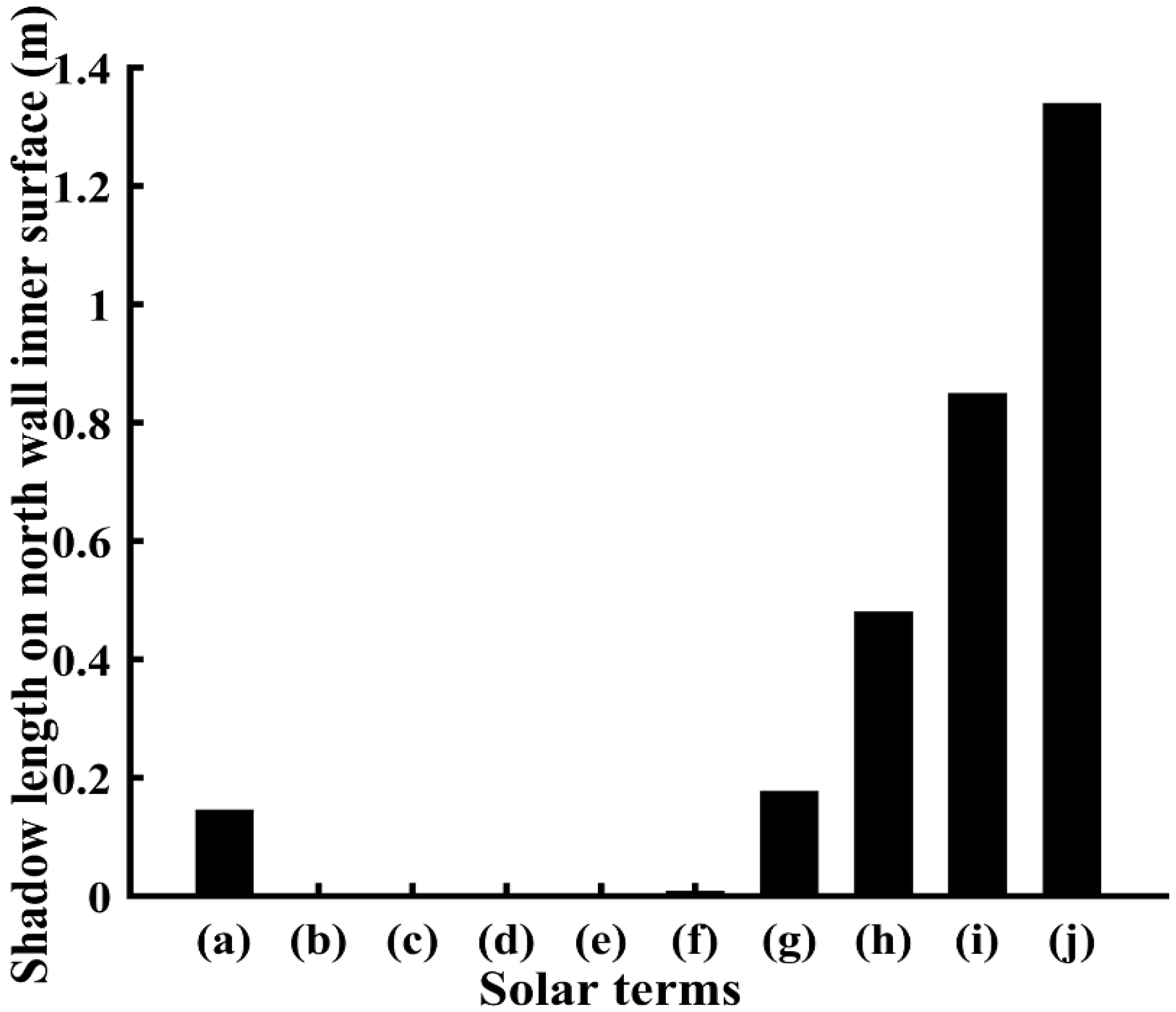 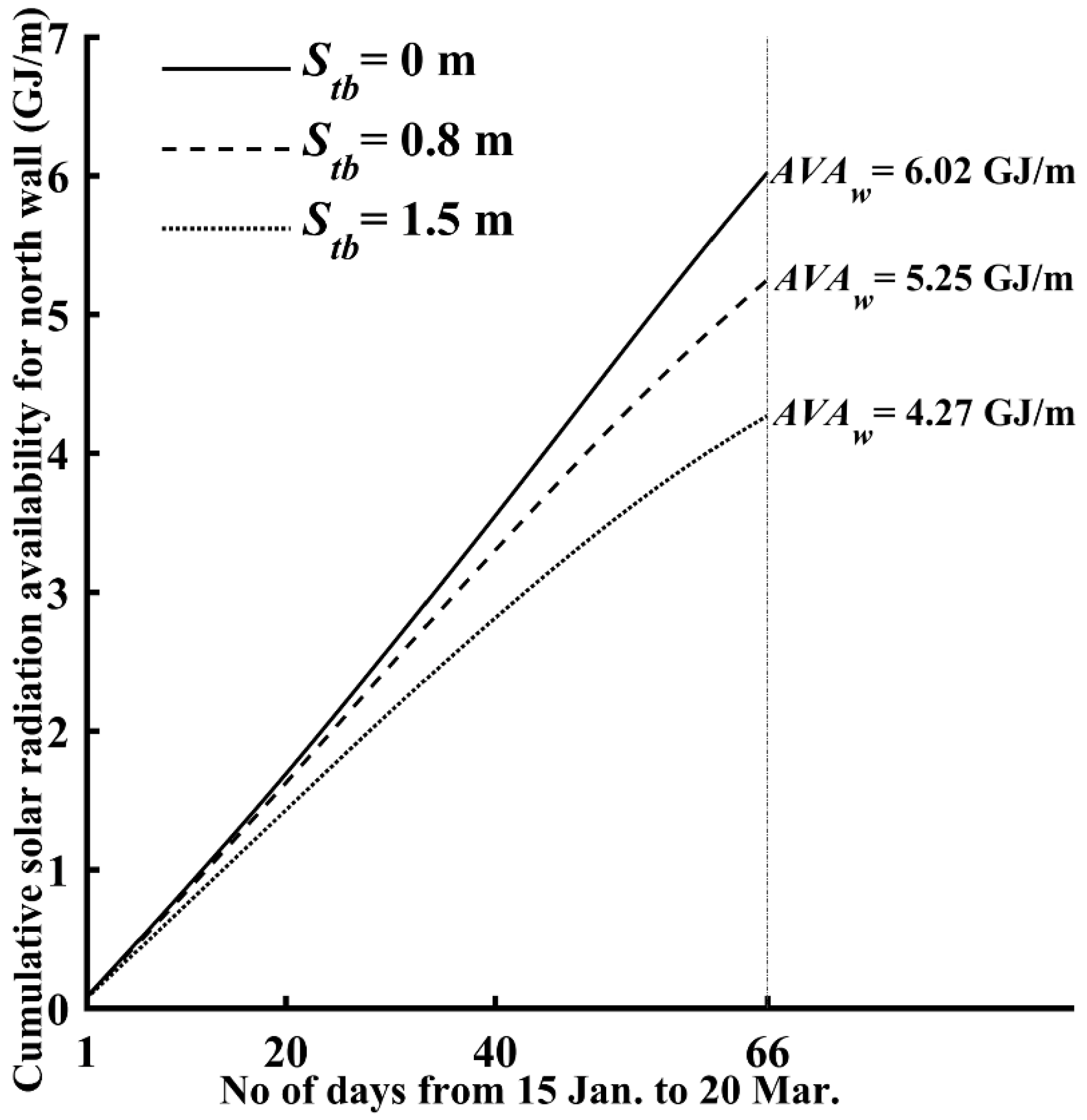 Table 1. Input parameters used for model validation.
Table 1. Input parameters used for model validation.
© 2020 by the authors. Licensee MDPI, Basel, Switzerland. This article is an open access article distributed under the terms and conditions of the Creative Commons Attribution (CC BY) license (http://creativecommons.org/licenses/by/4.0/).
We use cookies on our website to ensure you get the best experience. Read more about our cookies here.
Accept
We have just recently launched a new version of our website. Help us to further improve by taking part in this short 5 minute survey here. here.
Never show this again