The efficient use of energy is one of the key factors of success for economies operating in modern economic conditions. The energy sector produces fuels and electricity for other industries to consume and thus it is important to support development in the energy sector. Eco-efficient and stable supply of energy resources is fundamental to both energy security and sustainable development. Therefore, energy security becomes a priority for many countries and events that take place in the world energy market once again confirm that energy security is an urgent issue facing the world. Due to globalization, energy security concerns cannot be addressed solely by only one country. Global energy security means more than just access to affordable energy that has minimal impact on the environment. It is concerned with the protection of the global economy from potential threats such as political and socio-economic destabilization.
In response to the reduction in oil and gas supply, industrialized countries seek ways to effectively use and expand their resource base and improve energy technologies. Consequently, projects that focus on liquefied gas and alternative energy become increasingly popular [1]. Strategies of current interest are concerned with the production of gas hydrates, heavy oils, and technology-intensive innovative energy that is expected to cost less due to the use of innovative energy carriers. Innovations in the energy sector eventually will change the energy landscape. At present, the energy technology competition between technology leaders is intensifying [2].
Between 2014 and 2016, the world witnessed an oil price war between the world’s major oil producers (Organization of the Petroleum Exporting Countries (OPEC), led by Saudi Arabia, Russia, and the US). Those oil companies competed with each other for market shares in the global oil market while seeking to maintain the high rates of oil production. This business plan was in line with the principles of neo-mercantilism and it had its consequences such as the oil price decline and reduction in oil revenue [3]. Over the past decade, the energy sector has experienced one of the biggest changes, which is related to how and where hydrocarbon extraction is performed [4,5].
The current literature proposes an integrated methodology based on strengths, weaknesses, opportunities, and threats (SWOT) analysis, analytic hierarchy process (AHP), and fuzzy technique for order performance by similarity to ideal solution (F-TOPSIS) to evaluate energy strategies. The results of the evaluation show that using coal for electricity generation is the least preferred energy strategy [6]. The challenges affecting the successful implementation of energy strategies include transportation of energy by tanker [7] and energy price fixation by oil and gas cartels [8]. One of the key powers in the Middle East that has been in turmoil is Syria. While ethnic and religious differences are considered to be the main source of conflict in the Middle East, one should not rule out the presence of energy conflicts [9].
The external aspects of energy security constitute a dispute in the European Union (EU) [10,11]. After withdrawing from the Paris Climate Agreement and lifting the ban on crude oil export, the US shifted its priorities away from energy security to energy domination [12,13]. Russia’s energy policies, on the other hand, tend to emphasize technical objectives, rather than abstract, cohesive goals. Although this approach can prevent fundamental structural changes in the Russian energy sector, it also hinders the potential of renewable energy production, especially in the Arctic regions [14]. Turkey is the fastest-growing energy market among The Organisation for Economic Co-operation and Development (OECD) countries. Therefore, Turkey is an attractive market for energy companies, and it is often engaged in energy wars [15]. The energy policy of the Visegrad Group states ((V4): Poland, Czech Republic, Slovakia, and Hungary) is dependent on energy imports, increasing environmental pressure, and insufficient and disappointing process of energy policy Europeanisation. Therefore, the energy security of V4 states should be improved by deepening energy cooperation with partners from southern regions, in particular with the Middle East & North Africa (MENA) region [16,17]. To implement renewable energy strategies, to achieve and surpass the set goals with continued advances in renewable energy in the Baltic States, a certain degree of social awareness, perception, and acceptance is required [18].
The coronavirus (COVID-19) pandemic outbreak created uncertainty and destabilized the world energy economy, increasing financial market volatility. The oil price reaction to COVID-19 gradually accommodated until March 2020, when, 49 days after the release of the first coronavirus monitoring report by the World Health Organization (WHO), Saudi Arabia flooded the market with oil. As a result, international prices dropped more than 20% in one single day [19,20].
Given all of the above, it seems that today, the co-dependence between energy producers, consumers, and transporters becomes increasingly stronger. Hence, a single participant in the energy market can affect other players. This puts the global energy sector at great risk [21]. The main way to prevent negative consequences is to improve energy security. The modern energy market, however, requires participants to build relationships in order to prevent conflicts and enter geopolitical competition. From this perspective, the aim of this work is to identify the potential initiators of energy wars and determine their boundaries of influence through the prism of energy dependency.
In order to achieve this goal, several tasks are to be done:

The indicators in the proposed methodological approach are somewhat linked. For example, there is a weak inverse relationship between import quota and indicators, such as per capita energy consumption and total industrial production per capita [33]. There is practically no connection between import quota and indicators, such as energy intensity and energy exports per capita [34]. A moderate inverse relationship was found between import quota and variables, such as GDP and per capita energy production [35]. There is a strong relationship between energy imports per capita and import quota [36]. At the same time, the value of energy consumption not only affects the human development index, but it also serves as an important factor in measuring the level of sustainable development [37].
Based on the analysis of threats from energy strategies existing within the energy sector, it can be stated that there is a need for a well-balanced policy on global energy security to overcome the formation challenges of national energy balances. The energy balance is at the core of national security in many countries across the world, this fact made it possible to develop a conceptual framework for ensuring energy security on a global scale [38].
The proposed approach for predicting energy dependence levels of countries serves the following functions: (1) it allows achieving transparency, predictability, and stability of global energy markets; (2) it helps investors decide where to invest their funds; (3) it helps economies to choose energy-efficiency strategies; (4) it provides a basis for the achievement of environmental safety in the energy sector; (5) it enables countries to overcome the burden of energy dependence; and (6) it facilitates diversification across the global energy market based on the fundamental principles underlying energy security, such as accessibility, availability, and affordability [39]. The previous forecasts of energy dependence emphasized how strong the pandemic’s impact on energy demand is [40].
Although energy conflicts affect oil prices, their impact is less strong than that of the dollar. The negative effect of the dollar’s exchange rate was exacerbated after the global economic crisis. Furthermore, U.S. oil production has less influence on the oil market than energy conflicts and exchange rate [41]. In general, the U.S. energy strategy plays a vital role in the oil market, especially in energy conflicts and in the formation of dollar values. Understanding the effect of different energy strategies, which can be evaluated using the proposed methodological approach, countries will be able to draw energy policies and stabilize the oil market [42], and investors will be able to adjust their investment decisions and diversify their assets.
When selecting indicators for a model of energy dependence assessment, one should keep in mind that countries holding the largest amount of hydrocarbon reserves make up a rather small group [43,44,45]. This group includes developing and transition economies [43,46,47], which can provide access to their resources based on political intentions. This increases the level of international tension, a precondition for energy wars.
Future research can define energy strategies for various types of energy resources. Furthermore, the findings obtained might be extended by means of a more comprehensive methodological toolkit, in particular, through the use of different types of forecasting models and via the comparative analysis method. The research performed can be beneficial for policymakers or individuals governing the energy sector who are to respond to changing market conditions as fast as possible. 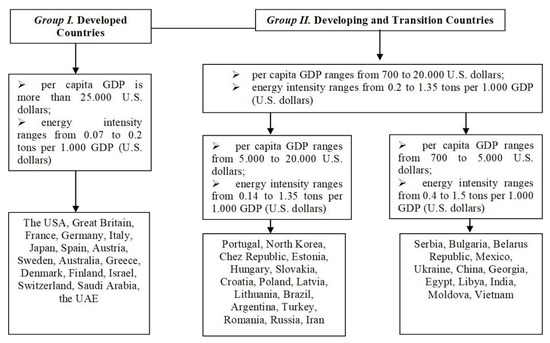 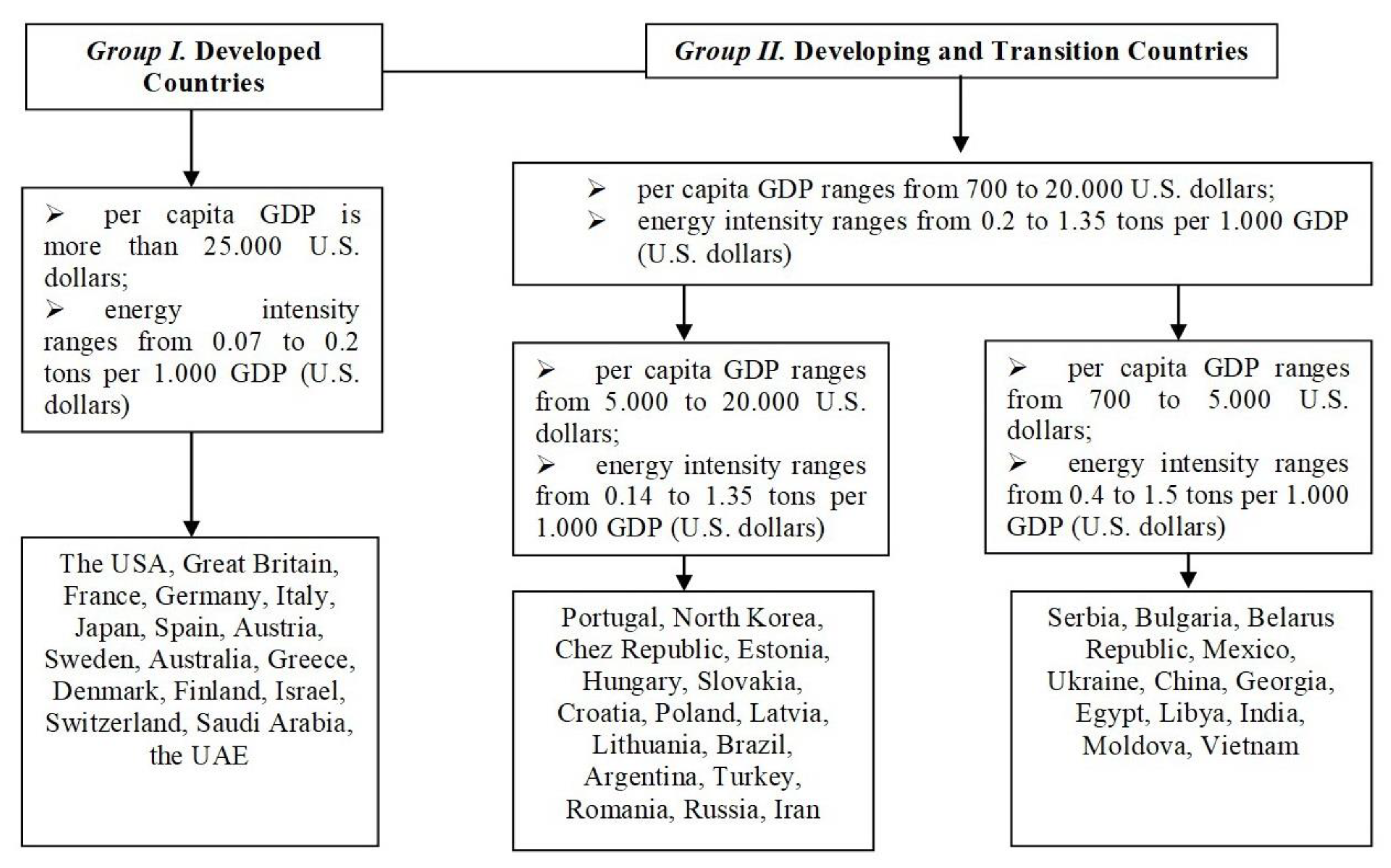 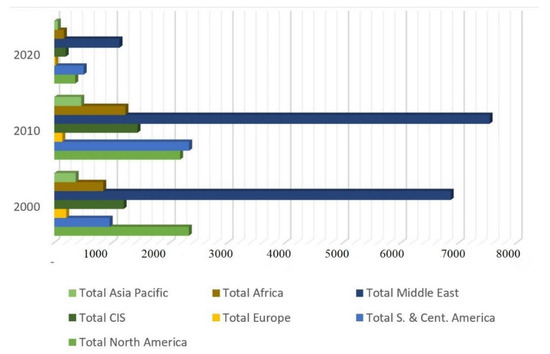 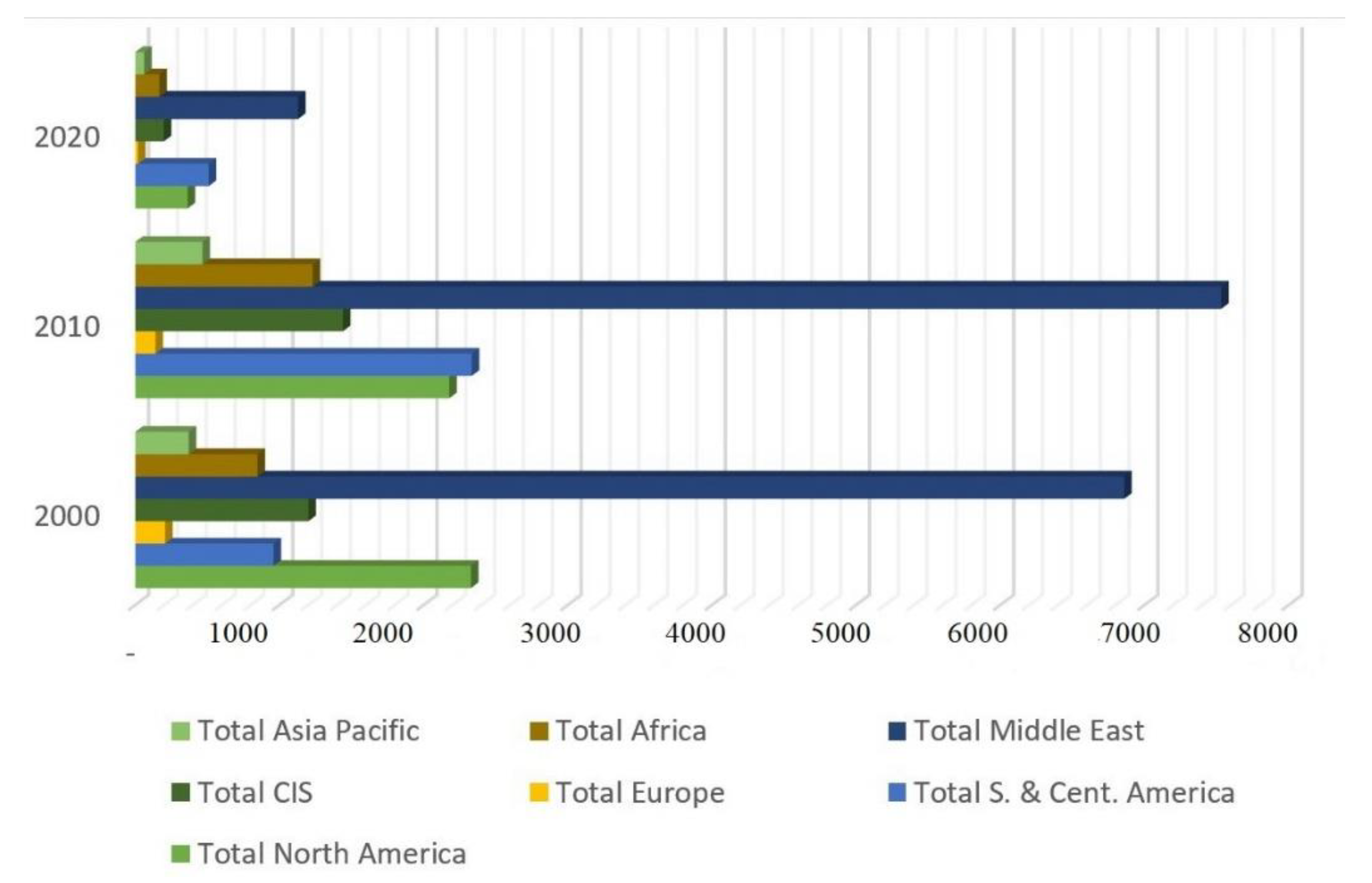 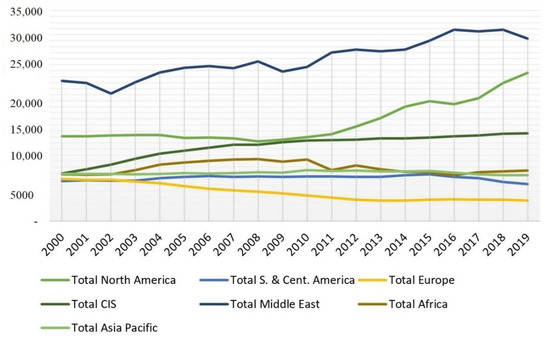 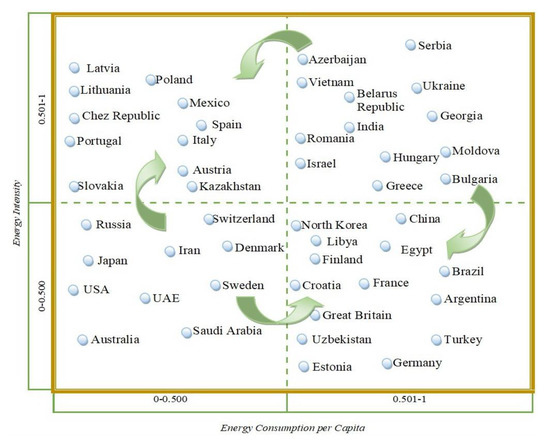 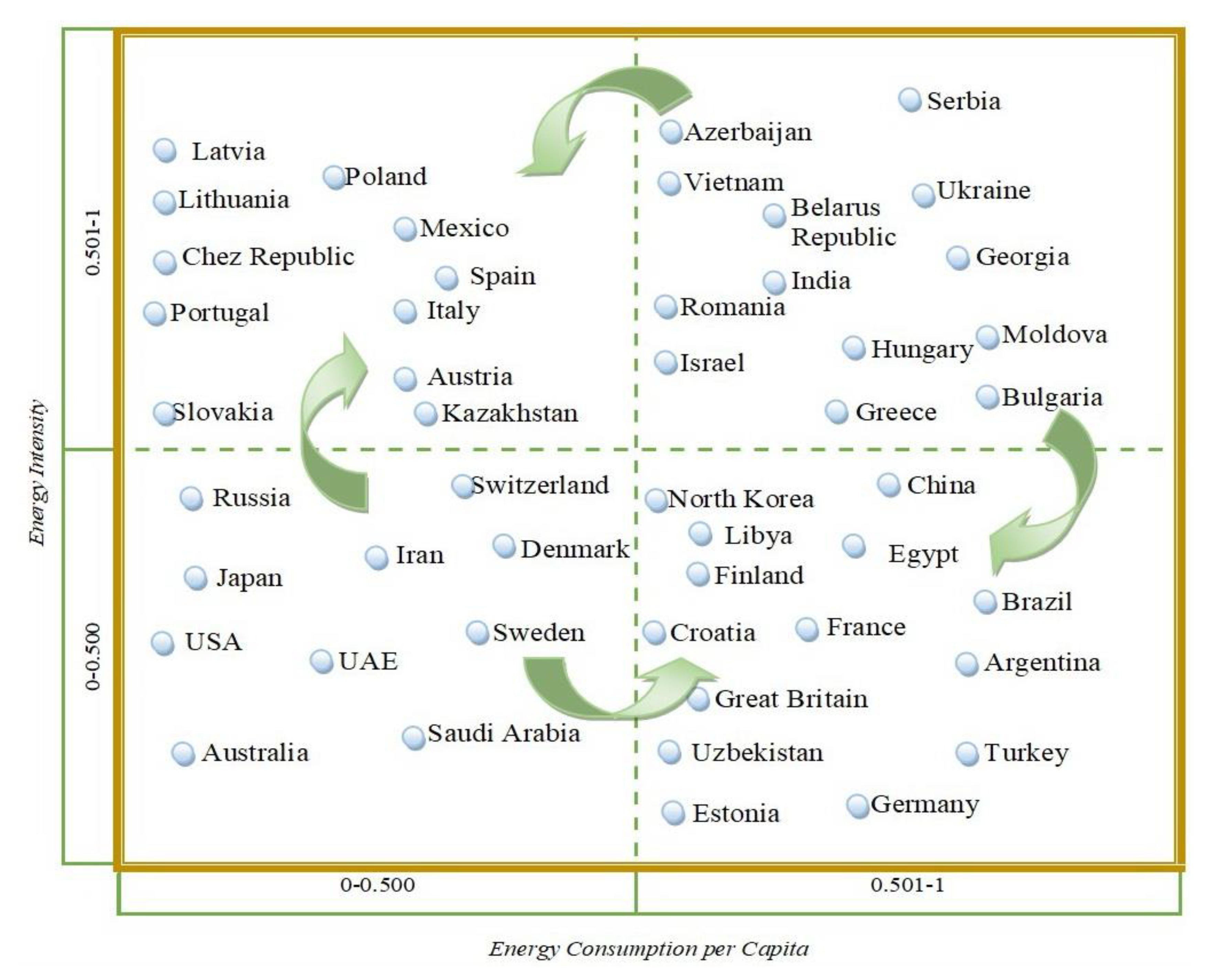 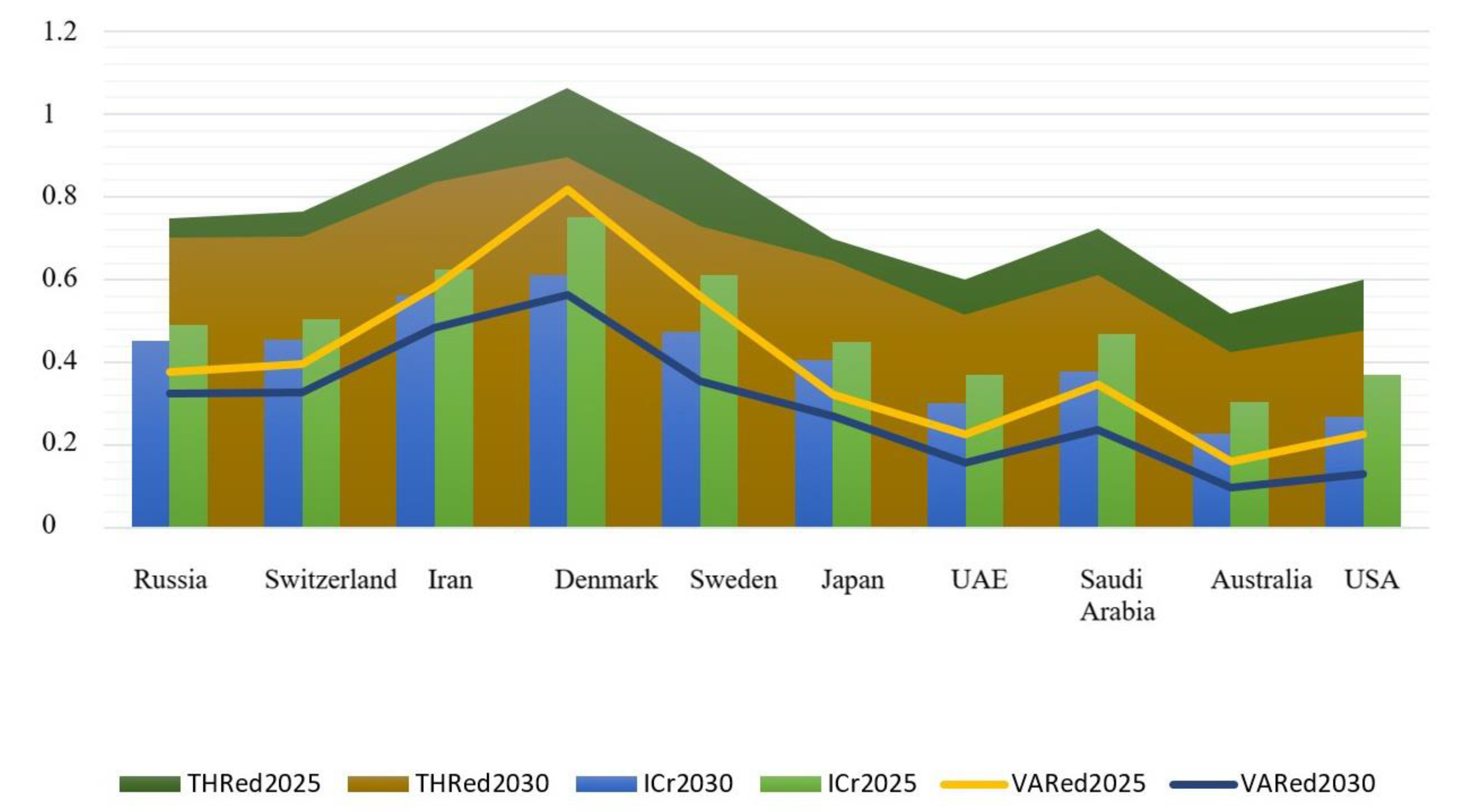