This paper presents a reliable and fast index to detect the instant of arc extinction for adaptive single-pole automatic reclosing (ASPAR). The proposed method is a simple technique for ASPAR on shunt compensated transmission lines using the Hilbert–Huang Transform (HHT). The HHT method is a combination of the empirical mode decomposition (EMD) and the Hilbert transform (HT). The first intrinsic mode function (IMF1) decomposed by EMD, which contains high frequencies of the faulty phase voltage, was used to calculate the proposed index. HT calculates the first IMF spectrum in the time-frequency domain. The presented index is the sum of all frequency contents below 55 Hz, which remains very low until the fault clearance. The proposed method uses a global threshold level and therefore no adjustment is needed for different transmission systems. This method is effective for various system configurations including different fault locations, line loading, and various shunt reactor configurations, designs, compensation rates, and placement. The performance of the method was verified using 324 test cases simulated in electromagnetic transient program (EMTP) related to a 345 kV transmission line. For all the test cases, the algorithm successfully operated with an average reclosing time delay of 32 ms.
Keywords: adaptive auto-reclosing; power system protection; EV transmission lines; transient fault; Hilbert–Huang transform adaptive auto-reclosing; power system protection; EV transmission lines; transient fault; Hilbert–Huang transform

Figure 1 shows the understudy 345 kV transmission line with the length of 200 km. The network had two buses that were connected to the power grid via two Thevenin equivalent voltage sources. The short circuit levels of the U1 and U2 equivalents were 10 GVA and 15 GVA, respectively. Additionally, the x/r ratio of the positive and zero sequences was 10 and 4, respectively. Table 1 shows the parameters of the single circuit transmission line for the positive and zero sequences. This transmission line was transposed and modeled as the frequency-dependent line in the EMTP software environment. The shunt reactor, as shown in Figure 1, had four windings and was grounded through an inductance to mitigate secondary arc current. The shunt reactor parameter calculations are expressed as follows for different cases.

In this paper, the Kizilcay method for secondary arc modeling in EMTP software was used. More details can be found in [31], which are not repeated here for brevity. The specifications of the arc used in the simulations were as follows:

An analytic signal is a complex-valued function without any negative frequency components. The real and imaginary parts of an analytic signal are real-valued functions related to each other by the Hilbert transform (HT). The HT of the real function is equal to . The definition of HT is as follows: where the symbol ‘*’ denotes the convolution operation and P indicates the Cauchy principal value. The analytic function of with respect to time can be defined as follows: where and is the analytic function calculated for the real function . m and φ are the instantaneous energy and phase functions in terms of time, respectively. It is unnecessary to compute the integral in (1) to achieve the HT of . Instead, in the first step, the Fourier transform of the real function is calculated, then its negative frequency components are set to zero and the inverse Fourier transform applied to it. The obtained function is the analytic function calculated for the real function , which its imaginary part is . The instantaneous frequency of the real function is:
The method of calculating the frequency-time distribution for the square amplitude of can be explained using HT. HT is a very suitable method for single mode signals and also calculates the energy distribution in time and frequency. However, the majority of signals are multi-components and their frequency content is spread in the frequency domain. In HHT method, to solve this problem, the input signal was first divided into several intrinsic mode functions (IMFs) by the empirical mode decomposition (EMD) method, where IMFs are time-varying mono-component (single frequency) functions [32]. Then, each of these IMFs is transformed by HT to the frequency domain and their energy is expressed in terms of time and frequency. Using the sifting process, the input signal is decomposed in terms of IMFs [32]: where R(t) is the residual function and n is the number of IMFs. IMFi is the ith decomposed IMF. The analytic functions of IMFs are calculated using the method described above. Each of these functions represents part of the original signal spectrum. and vectors are calculated for each in the time domain. Finally, the 2n vector, with the same length as the time vector t, are the output of the HHT. The spectrum of the input signal is the combination of these vectors: where and are the instantaneous energy and frequency functions in terms of time for , respectively. Moreover, sparse matrix is a matrix that has a large number of zeros. function generates a sparse matrix from the triplets t, , and such that . Entries that have no value assigned to them are equal to zero. The lengths of the three vectors t, , and are equal.

To verify and validate the effectiveness and accuracy of the proposed method for ASPAR, various simulation tests were carried out under different fault locations, line loadings, and various shunt reactor configurations, designs, compensation rates, and placements. The EMTP software was utilized with a 50 ms data window length (WL) and 1.92 kHz sampling frequency rate (32 samples per cycle for 60 Hz).
The reactors used in the simulations of this paper were grounded efficiently or to reduce the secondary arc current, and the three-phase shunt reactors were grounded through a reactance Xn. In the literature, two methods for calculating Xn have been proposed [34,35,36]. The method presented in [34,35] is independent of the transmission line length, but reduced the fault current less than the method presented in [36]. The reactance value calculated according to the method in [34,35] was always less than the [35] method. The following is the calculation of Xn based on these two methods. where , , F, Xsh, and Xn are positive sequence line susceptance, zero sequence line susceptance, shunt compensation rate, the equivalent reactance of line shunt reactor, and equivalent reactance of neutral reactor, respectively. The reactances calculated in (9) and (10) corresponded to the placement of the reactor only on one side of the line. If the transmission line is compensated from both sides, the reactance value of each reactor on each side of the line was twice of the Xsh and Xn reactances calculated above. In other words, the reactive power consumption of the equivalent reactor was divided into two. Table 2 shows the number of shunt reactors for the placement of one or both sides of the line, three rates of compensation 0.5, 0.75, and 0.95, and three modes of effective grounding and grounding based on the methods in [34,35,36].
Table 3 shows the performance of the proposed technique for different power system conditions and types of shunt compensation. Fault clearing detection delay (FCDD) is defined as the time difference between the secondary arc extinction detection and the secondary arc extinction moment obtained from the simulation. Simulations were performed for medium and high loading of the transmission line and various fault locations. By measuring the faulty phase voltage on both sides of the transmission line, the algorithm was tested for both substations adjacent to the line. As can be seen, regardless of the power system conditions and the type and rate of compensation, the proposed scheme can accurately and quickly detect fault clearance. The average FCDD for 324 tested cases was 32 ms.
Figure 5a shows the faulty phase voltage at Bus 2 for the single line to ground fault at 30% of the line. The Xsh and Xn of the inductively grounded shunt compensators at each side of the lines were 2380.60 and 461.42 Ω, respectively. Fundamental voltage magnitude fluctuations cause energy spreadation in low frequency components on the most signal processing methods. The HHT method adaptively distinguishes between fundamental voltage magnitude fluctuations and the presence of a low frequency component, therefore the spectrum extracted from the sub-synchronous components receives the least effect from the fundamental component. During the secondary arc, due to the reduction of the fault current, the length of the arc fluctuates more, and as a result, the voltage of the faulty phase fluctuates severely (Figure 5a). As demonstrated in Figure 5b, the proposed criterion is independent of the arc behavior and the IN value is zero during the secondary arc. This is due to the use of and the excellent ability of HHT to decompose signal components with minimal spectrum leakage. Similar waveforms of field measurements, obtained from electrical systems reported in [37], showed similar voltage behavior, hence, it is important that the secondary arc extinction detection method is independent of the voltage behavior during the dead-time.
Due to the growth of renewable resource penetrations in the power system, the need for adaptive protection methods is increasing. Renewable resources are generally connected to the power system through power electronic interfaces, and one of their destructive effects is increasing the power system THD [38]. Many of the methods proposed in the literature are based on the increase of THD during the secondary arc and the sharp decrease after the fault clearance. In the presence of renewable resources, many of these methods lose their ability to function properly due to the lack of THD reduction after fault clearance [4,5,6,7,8,9,10]. The proposed method does not use the harmonics in voltage to calculate the criterion, and in addition, due to the high capability of the HHT method, the proposed method can have a correct and fast performance regardless of the high penetration of renewable resources in the power system and THD value.
In Table 4, a group of recent papers have been selected for qualitative comparison with the presented method. As can be seen, the strengths of the proposed method include the following:

In this paper, a novel algorithm for detecting secondary arc extinction in shunt compensated transmission lines was presented. Using the Hilbert–Huang transform (HHT), the absolute value of all frequency contents below 60 Hz of the fault phase was calculated. Secondary arc extinction was then detected using a global threshold value. The algorithm was tested on a transmission line for different fault location, line loading, and various shunt reactor configurations, designs, compensation rates, and placement. The test results validate the algorithm’s performance as well as its independence of the shunt compensation configuration. The main features of the algorithm can be summarized as follows:

Methodology, validation, writing—original draft preparation, A.G.B.; Review and editing, supervision, N.B. All authors have read and agreed to the published version of the manuscript. 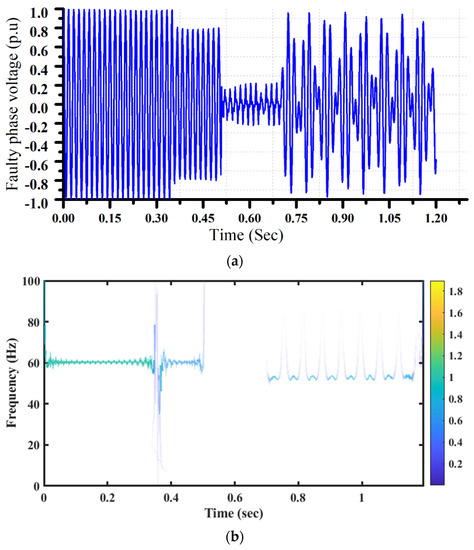 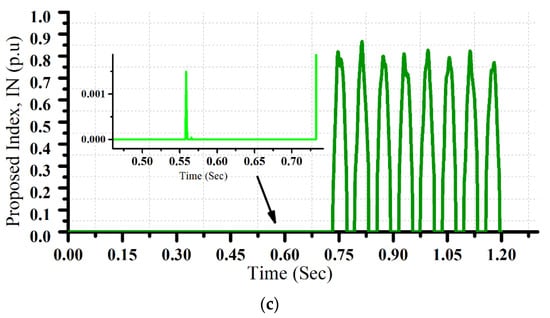 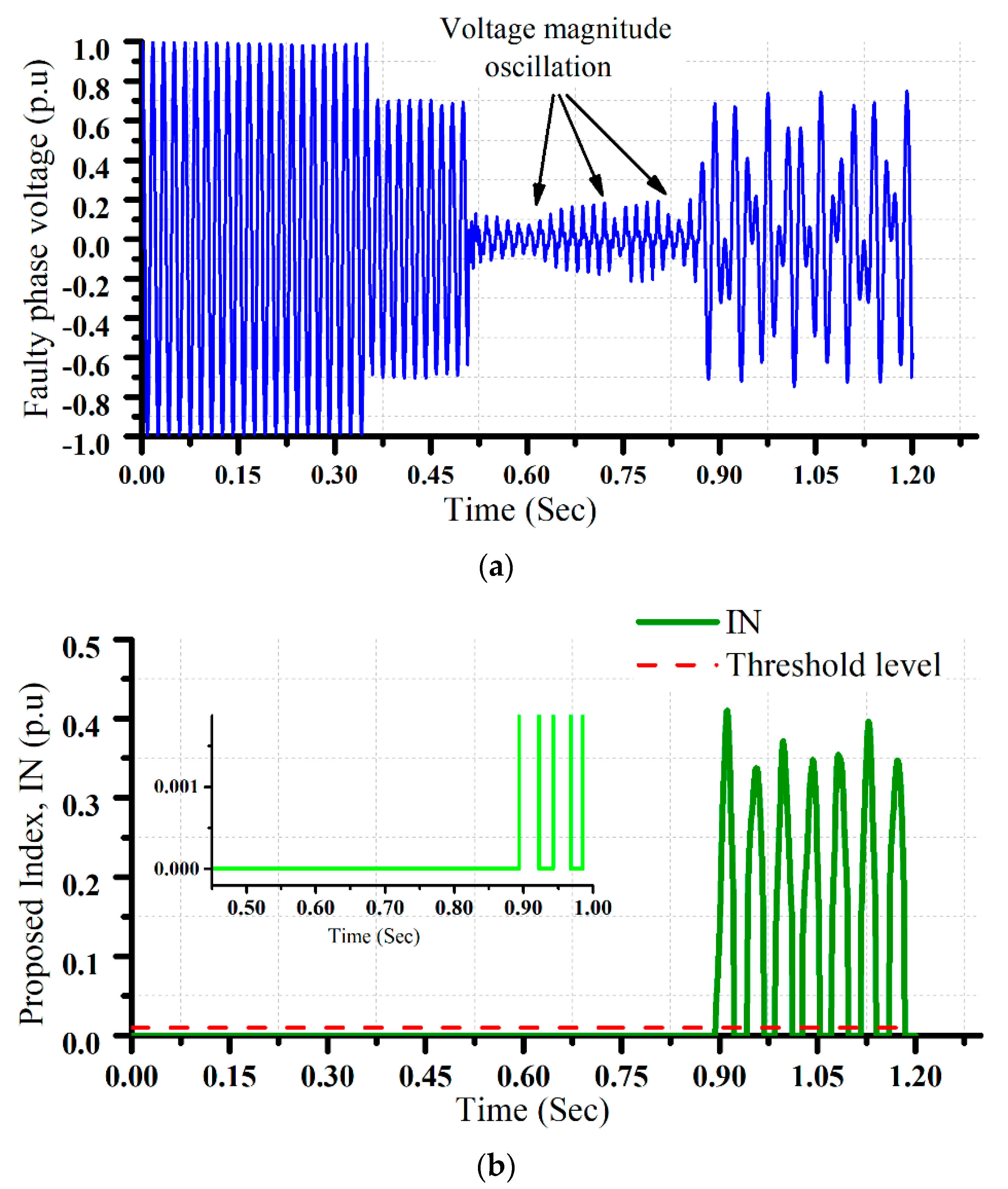