The purpose of this study was to develop a mathematical model for non-contacting face seals to analyze how their performance is affected by thermoelastic phenomena. The model was used to solve thermal conductivity and thermoelasticity problems. The primary goal was to calculate the values of thermal deformations of the sealing rings in a non-contacting face seal with a flexibly mounted rotor (FMR) for a turbomachine. The model assumes the conversion of mechanical energy into heat in the fluid film. The heat flux generated in the fluid film is transferred first to the sealing rings and then to the fluid surrounding them. Asymmetric distribution of temperature within the sealing rings leads to the occurrence of thermal stresses and, consequently, a change in the geometry of the rings. The model is solved analytically. The distributions of temperature fields for the sealing rings in the cross-sections are calculated using the Fourier-Bessel series as a superficial function of two variables (r,z). The thermoelasticity problems described by the Navier equations are solved by applying the Boussinesq harmonic functions and Goodier’s thermoelastic displacement potential function. The proposed method involves solving various theoretical and practical problems of thermoelasticity in FMR-type non-contacting face seals. The solution of the mathematical model was made use of analytical methods, and the most important obtained results are presented in graphical form, such as the temperature distributions and axial thermal distortions in cross-sections of the rings. The calculated thermal deformations of the sealing rings are used to determine the most important seal performance parameters such as the leakage rate and power loss. The article also presents a multi-criteria analysis of seal rings materials and geometry, which makes it easier to choose the type of materials used for the sliding rings. View Full-Text
Keywords: mechanical seal; non-contacting face seal; heat transfer; thermal analysis mechanical seal; non-contacting face seal; heat transfer; thermal analysis
►▼ Show Figures 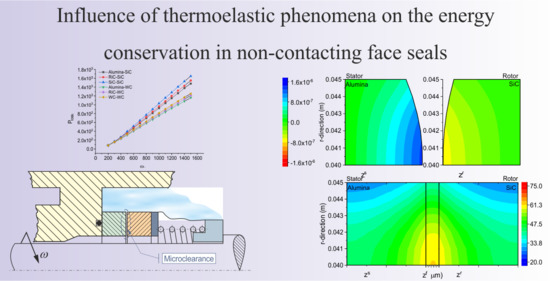 
Blasiak, Slawomir. 2020. "Influence of Thermoelastic Phenomena on the Energy Conservation in Non-Contacting Face Seals." Energies 13, no. 20: 5283.