Knowledge about the Final Disposal of Nuclear Fuel in Sweden: Surveys to Members of Parliament and Citizens
Previous Article in Special Issue

:
The state of health (SOH) and remaining useful life (RUL) of lithium-ion batteries are two important factors which are normally predicted using the battery capacity. However, it is difficult to directly measure the capacity of lithium-ion batteries for online applications. In this paper, indirect health indicators (IHIs) are extracted from the curves of voltage, current, and temperature in the process of charging and discharging lithium-ion batteries, which respond to the battery capacity degradation process. A few reasonable indicators are selected as the inputs of SOH prediction by the grey relation analysis method. The short-term SOH prediction is carried out by combining the Gaussian process regression (GPR) method with probability predictions. Then, considering that there is a certain mapping relationship between SOH and RUL, three IHIs and the present SOH value are utilized to predict RUL of lithium-ion batteries through the GPR model. The results show that the proposed method has high prediction accuracy.
Keywords:
lithium-ion batteries; state of health; remaining useful life; indirect health indicator; grey relation analysis; Gaussian process regression

The lithium-ion batteries data set used in this paper is from the open data set of NASA Ames Prognostics Center of Excellence (PCoE) [30]. A set of experimental data of lithium-ion batteries including four lithium-ion batteries (Nos. 5, 6, 7, and 18) are used. They are charged and discharged, and the impedance measured under different operating conditions at room temperature (24 °C). The charging process was divided into two steps. The first step was to use 1.5 A constant current charging until the battery voltage reached 4.2 V. The second step was to use constant voltage charging to keep the battery voltage at 4.2 V and reduce the current to 20 mA. The discharging process was carried out under continued current 2 A until the voltage of Nos. 5, 6, 7, and 18 dropped to 2.7 V, 2.5 V, 2.2 V, and 2.5 V, respectively. The capacity degradation curve of each battery is shown in Figure 1.

The capacity of lithium-ion batteries is usually obtained by measuring their internal resistance to reflect the specific capacity [31]. This is because the impedance of the battery increases with the loss of battery life and capacity. But the condition of impedance measurement by impedance meter is harsh and time-consuming [32,33]. Therefore, it is more reasonable to estimate the SOH and RUL of lithium-ion batteries by using common sensors to measure some indirect parameters which are easy to obtain [34].
In this paper, IHIs reflecting the capacity of lithium-ion batteries are extracted from the charge and discharge voltage, current, and temperature curves. The discharge process voltage of lithium-ion batteries with different cycles is shown in Figure 2. It can be seen that the time needed to reach the lowest discharge point (named IHI1) decreases with the increase of cycle numbers, and the time decrement from 3.8 V to 3.5 V (named IHI3) is also shortened. The discharge temperature of lithium-ion batteries with different cycles is shown in Figure 3. When the battery temperature rises to the highest point (named IHI2), the time decreases with the increase of the number of cycles. Moreover, the research shows that the following five indicators can also be used as IHIs: IHI4 is the initial maximum slope of the voltage characteristic curve in the process of discharge; IHI5 is the time when the battery temperature reaches the peak value; IHI6 is the initial maximum curvature of the current curve in the process of constant voltage charging; IHI7 is the charging time; and IHI8 is the area under the current curve.

GPR is a nonparametric model based on Bayesian theory. Its output variables are uncertain [36]. A core idea is to regard the random process composed of multiple random variables as a high-dimensional joint normal distribution [37].
A typical GPR is used to approximate the target output f(x), where is the d-dimension input vector and the output function f(x) is the probability distribution: where and are mean and covariance functions respectively. Considering the linear decline of battery capacity degradation trend in the Gaussian prediction model, the linear function is used as the mean value function, as in Formula (6); At the same time, we choose the squared exponential covariance function (SE), as in Formula (7):
For many real scenes, the observation output can be expressed as an implicit function, that is, where is the observation vector , is the Gaussian noise and . Therefore, the prior distribution of observations is as follows: where is an n-dimensional unit matrix and is a noise covariance matrix. is a symmetric positive definite matrix, which can be expressed as:
The similarity of variables and can be determined by Equation (11). The greater the similarity between the two variables, the greater the value of . According to the derivation process, the corresponding values can be obtained by optimizing the negative log marginal likelihood () as
is expressed as follows:
Equation (13) can be solved by using an effective gradient descent algorithm. The basic idea of the algorithm is to get the maximum value of the objective function by calculating the derivative of the log-likelihood function. where is the element that sets the super parameter. By using the above calculation process, the GPR model is completed. Then, the GPR model is used to predict the task through posterior distribution. Because GP is a random process, the new input dataset follows the Gaussian distribution of the training dataset . Therefore, the joint prior distribution of the observed value and the predicted value at the predicted point are expressed as:
Considering the joint Gaussian prior distribution on , the posterior distribution is analytically derived as: where the prediction mean and the prediction covariance are given as follows:
Here the mean prediction values are taken as the prediction value of the test datasets, and the covariance prediction values are used to reflect the uncertainty of the GPR model.

This research focused on the fact that in some practical applications, battery capacity cannot be obtained through online measurement, so it is difficult to predict the SOH and RUL of the battery. A novel SOH and RUL prediction framework of lithium-ion batteries based on GPR with IHIs is developed. Firstly, IHIs replacing the battery capacity are extracted from the data of voltage, temperature, and current, collected by means of some common sensors. GRA is used to select the important IHIs with a high correlation with the battery capacity and to determine the best input. Then, a short-term SOH prediction model is established via the high-dimension GPR model with the linear function as the mean function. According to the predicted SOH and the determined IHIs, the RUL prediction model was developed. The experimental results show that the proposed method in this paper is accurate and effective in SOH and RUL prediction, and that it can significantly improve the prediction performance.
To verify the adaptability of the proposed method, experiments were prepared for lithium-ion batteries under different working conditions, such as different charging currents, changes in ambient temperature, different discharge voltages, etc. Meanwhile, we hope to have a better understanding of the physical model of lithium-ion batteries concerning the capacity degradation process, and will consider the combination of model-based and data-driven methods to further improve the prediction accuracy.

J.J. and J.L. are co-first author of the paper. J.J. and J.L. conceived the theme and wrote the original manuscript; Y.S., J.W. and X.P. did the work of data curation; fund acquisition—Y.S., J.W. and J.Z. All authors have read and agreed to the published version of the manuscript. 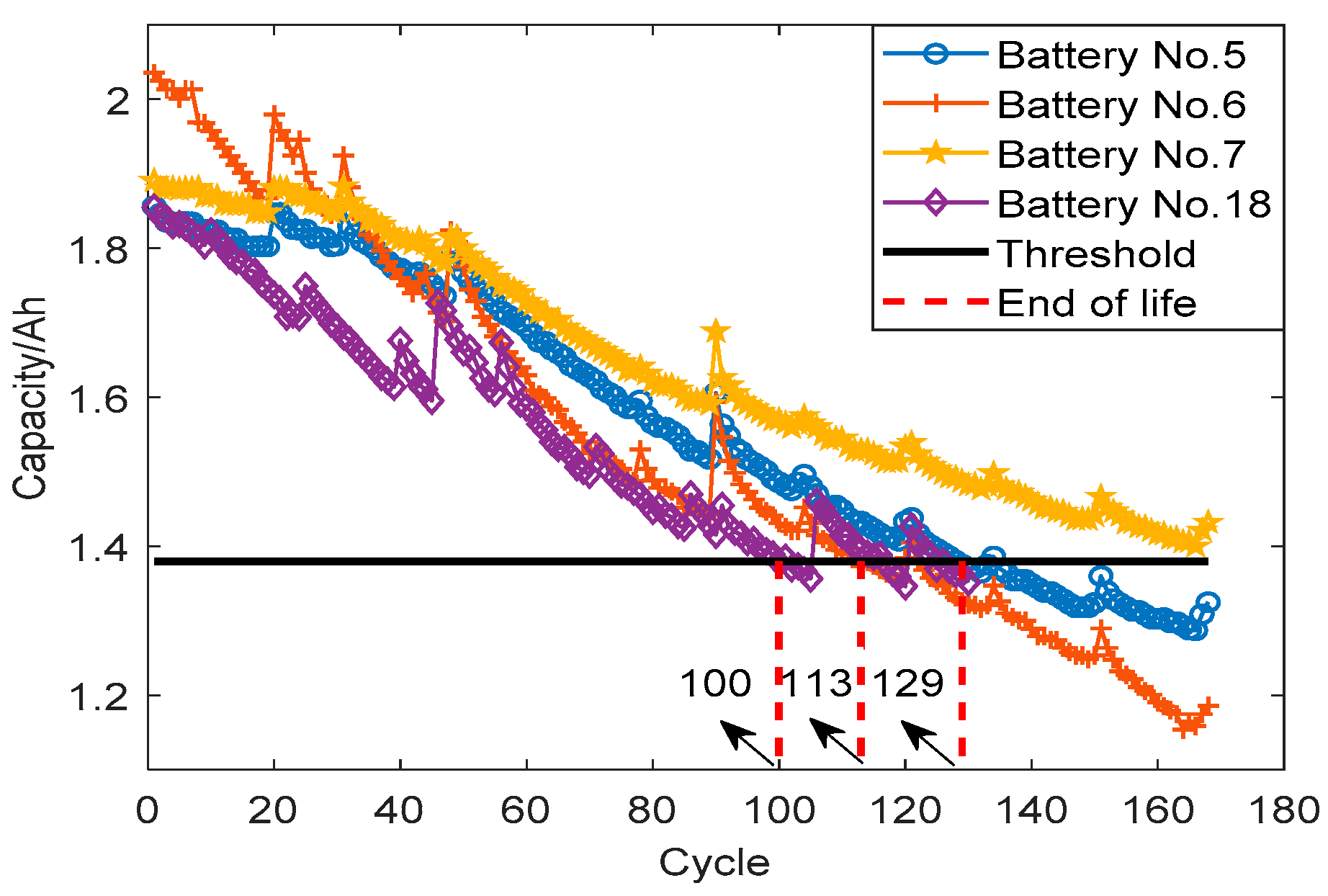 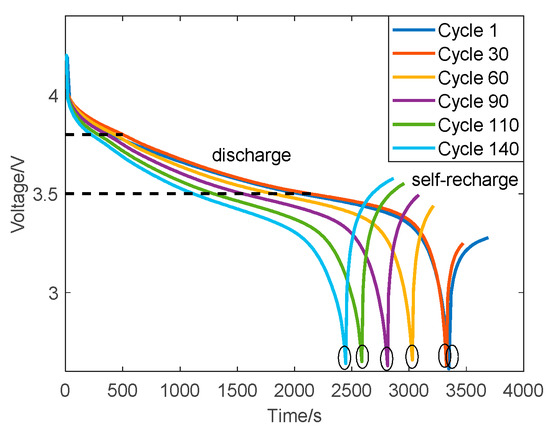 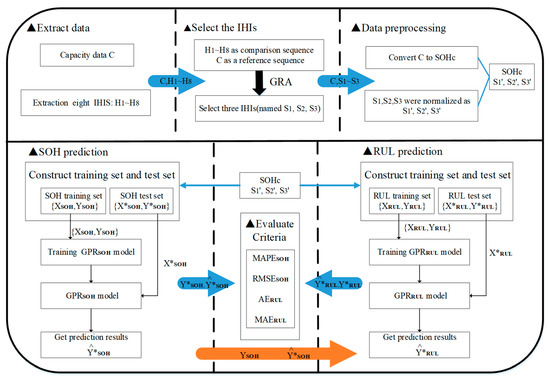 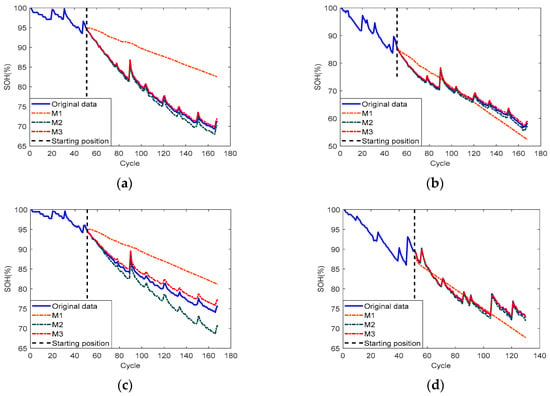 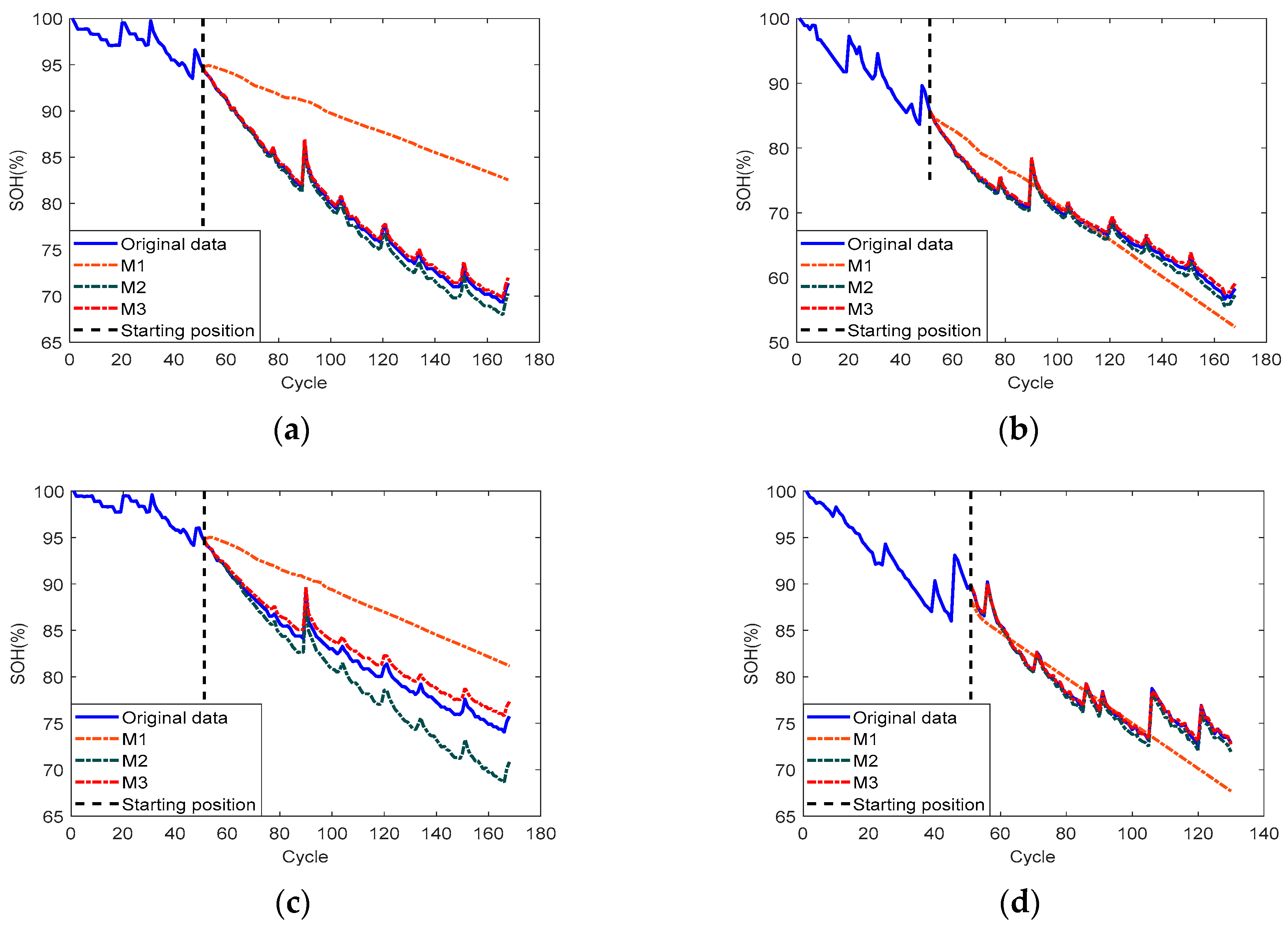