Recently, extensive studies have focused on exploring a variety of silicon (Si) nanostructures among which Si quantum dots (Si QDs) may be applied in all Si tandem solar cells (TSCs) for the time to come. By virtue of its size tunability, the optical bandgap of Si QDs is capable of matching solar spectra in a broad range and thus improving spectral response. In the present work, size-controllable Si QDs are successfully obtained through the formation of Si QDs/SiC multilayers (MLs). According to the optical absorption measurement, the bandgap of Si QDs/SiC MLs shows a red shift to the region of long wavelength when the size of dots increases, well conforming to quantum confinement effect (QCE). Additionally, heterojunction solar cells (HSCs) based on Si QDs/SiC MLs of various sizes are presented and studied, which demonstrates the strong dependence of photovoltaic performance on the size of Si QDs. The measurement of external quantum efficiency (EQE) reveals the contribution of Si QDs to the response and absorption in the ultraviolet–visible (UV-Vis) light range. Furthermore, Si QDs/SiC MLs-based solar cell shows the best power conversion efficiency (PCE) of 10.15% by using nano-patterned Si light trapping substrates.
Keywords: Si QDs; silicon carbide; MLs; solar cells; size-dependent photovoltaic performance; nano-patterned structures Si QDs; silicon carbide; MLs; solar cells; size-dependent photovoltaic performance; nano-patterned structures

Characterized by abundance, non-pollution, and mature production technology, solar cells based on silicon (Si) have been extensively applied. Third-generation tandem solar cells (TSCs) are obtained by combining various kinds of semiconductor materials with conventional crystalline Si (c-Si) cells for the purpose of solving the Shockley-Queisser (S-Q) limit of traditional c-Si solar cells (~29%), which draw worldwide attention [1]. In the past several years, it was theoretically and experimentally shown that tandem structures were effective in improving the photovoltaic property of solar cells [2,3,4]. For instance, Meillaud et al. theoretically calculated that two-junction TSCs could reach an efficiency of 42.5% as long as the bandgap of top cell materials was 1.7 eV [5]. Furthermore, the efficiency of three-junction TSCs could reach up to 47.5% in theory, and middle and top materials should have a bandgap of 1.5 eV and 2.0 eV, respectively [6]. Since upper cell materials with suitable bandgap are of critical importance for multi-junction TSCs, numerous semiconductors have been deeply studied, including III–V and II–VI compounds, organic/inorganic perovskite materials, etc. [7,8,9]. After systematical investigation, however, consideration must be given to several disadvantages of upper cell materials described earlier. Firstly, the lattice mismatch between c-Si bottom cells and epitaxial III–V compounds (e.g., GaAs, GaAsP, and GaInP2) will increase the density of interface defects and then reduce carrier collection efficiency [10,11,12]. Secondly, the toxicity of Cd and the rarity of Te and Se in the earth’s crust pose a challenge to II-VI compounds and thus limit their application in environmentally friendly products [13,14]. Thirdly, high fabrication cost arising from complicated structures and indispensable expensive electron and hole transfer layers in separate perovskite cells prevents the future realization of perovskite/Si tandem cells [15,16,17]. In contrast, Si quantum dots (QDs) became the most promising materials in third-generation solar cells due to their excellent lattice match with c-Si bottoms, low fabrication cost, and novel physical property [18,19]. Because of quantum confinement effect (QCE), Si QDs with low dimension can see an increase in bandgap when dot size decreases, providing an effective method of controlling energy band structures through altering the size of Si QDs [20,21,22]. Moreover, all-Si TSCs can be achieved by in situ deposition in conventional production lines without extra materials or processing.
Si QDs play a critical and fundamental role in tandem structures, which thus makes it necessary to investigate the optical and photovoltaic characteristics of solar cells based on Si QDs systematically. For example, research on (Si QDs/SiO2 matrix doped with phosphorus)/c-Si HSCs showed that external quantum efficiency (EQE) or internal quantum efficiency (IQE) experienced an increase when the size of Si QDs decreased from 8 nm to 3 nm [23]. (Si QDs/SiNx doped with boron)/c-Si HSCs were fabricated, and devices with the best performance were obtained, whose QD size was 3.5 nm on average and short-circuit current density (Jsc) was 19.86 mA/cm2 [24]. The bandgap of SiC is lower than that of SiO2 and SiNx, thereby contributing to enhancing the efficiency of carrier transport to improve the performance of devices [25]. Song et al. preliminarily made p-type Si QDs: SiC/n-type c-Si solar cell devices whose power conversion efficiency (PCE) was 4.66% [26]. In this work, Si QDs/SiC multilayers (MLs) containing different-sized Si QDs are obtained by traditional plasma-enhanced chemical vapor deposition (PECVD) and annealing at high temperature. Raman and transmission electron microscopy (TEM) measurement indicates that the diameter of obtained Si QDs is 2.5 nm, 5.0 nm, and 8.9 nm. The optical absorption edge has a red shift to the region of long wavelength by raising the size of Si QDs, complying with QCE. In addition, prototype n-a-Si/(Si QDs/SiC MLs)/p-Si HSCs with different-sized Si QDs are fabricated, whose size-dependent photovoltaic performance is observed. Moreover, Si QDs (4 nm)/SiC (2 nm) MLs are prepared on the nano-patterned p-Si substrate, with corresponding cells exhibiting a Jsc and PCE of 34.95 mA/cm2 and 10.15%, respectively, because of light trapping effect.

PECVD was applied to prepare a-Si:H/SiC MLs on of substrates of c-Si and quartz by alternatively repeating a-Si:H and a-SiC depositions in which radio frequency power and substrate temperature were 30 W and 250 °C, respectively. a-Si:H and a-SiC sublayers were deposited by pure silane (SiH4) and mixed gases of methane (CH4) and SiH4 whose gas ratio R ([CH4]/[SiH4]) was 10. a-SiC sublayers had a thickness of 2 nm, while a-Si:H sublayers had a thickness of 2 nm, 4 nm, and 8 nm, respectively, through changing deposition time. As is known to all, Si QDs are of vital importance for spectral response and optical absorption in Si QDs/SiC MLs. To make a better comparison, a-Si:H layers should keep the same total thickness of 24 nm in the process of the deposition so that the periodicity of multilayered samples whose a-Si:H sublayers had a thickness of 2 nm, 4 nm, and 8 nm was 12, 6, and 3, respectively. Post-treatment conducted under N2 atmosphere involved one-hour dehydrogenation and annealing at 450 °C and 900 °C, respectively. HR800 Raman spectrometer obtained from Jobin Yvon Horiba was adopted to evaluate the structural change of annealed Si/SiC MLs and Tecnai G2 with an operating voltage of 200 kV was used for generating Si QDs via TEM observation. The light absorption of Si QDs/SiC MLs was measured by UV-3600 spectrophotometer obtained from Shimadzu under room temperature conditions.
To investigate the size-dependent photovoltaic performance of samples, this work prepared Si QDs/SiC MLs containing Si QDs of different sizes on p-type (1~3 Ω·cm) and heavily doped p-type (p+-type, ~0.001Ω∙cm) Si wafers, and then obtained p-i-n (or p+-i-n) HSCs through the deposition of 20-nm n-type amorphous Si layers on MLs. The deposition of n-Si layer was completed in phosphorane (PH3) (1% in H2) and SiH4 whose R ([PH3]/[SiH4]) was 10. Besides, the native surface oxide was removed through the 10-s dipping of Si wafers in 2% hydrofluoric acid (HF) solution prior to fabrication. At last, solar cell devices were achieved through the evaporation of Al electrodes on Si wafer surface and back. Then, all cell samples with an area of around 0.8 cm2 underwent a 30 min alloying process at the temperature of 425 °C to obtain good Ohmic contact. A 610C electrometer purchased from Keithley was used for measuring the current density–voltage (J-V) features of solar cells containing different-sized Si QDs/SiC MLs under the illumination of AM1.5G (100 mW/cm2). In the present study, the average photovoltaic results with standard deviation were obtained by measuring three samples three times under each condition. The QEX-10 spectral response measurement system was adopted to collect the EQE spectra of solar cells in the wavelength range of 300 to 1200 nm.
A light trapping structure by nano-sphere lithography and reactive ion etching (RIE) technique was proposed, with the aim of further enhancing the photovoltaic performance of solar cells based on Si QDs. Experimental details are provided in our previous works [27]. In the present study, nano-spheres had a diameter of 300 nm and etching time was 8 min. Similarly, HSCs were obtained by fabricating Si QDs/SiC MLs and phosphorus-doped Si layers on the substrate of nano-patterned p-Si. TEM and scanning electron microscope (SEM) were used to characterize formed structures.

In this work, a-Si:H/SiC MLs are annealed at 900 °C to fabricate solar cells based on Si QDs/SiC MLs. The designed thickness of a-Si:H sublayers is 2 nm, 4 nm, and 8 nm, while that of amorphous SiC sublayers is 2 nm. According to TEM and Raman observation, Si QDs are successfully achieved after annealing with a diameter of 2.5 nm, 5.0 nm, and 8.9 nm, indicating that the size of Si QDs is controllable. A study on the optical performance of Si QDs/SiC MLs shows that optical absorption edge has a red shift to the long wavelength region when the size of Si QDs increases, which is due to QCE. Moreover, HSCs are obtained by fabricating Si QDs/SiC MLs of different sizes and phosphorus-doped a-Si films on the substrates of p-Si and p+-Si. The results indicate that the photovoltaic performance of Si QDs is strongly dependent on their size, and solar cells with Si QDs (4 nm)/SiC (2 nm) MLs have the best photovoltaic parameters of Voc, Jsc, and PCE, which are 530 mV, 24.66 mA/cm2, and 7.27%, respectively. EQE measurement of p+-i-n devices excluding the absorption of the c-Si substrate clearly demonstrates what Si QDs contribute to spectral response in the region of UV-Vis light. The spectral response in the short wavelength region is enhanced with the decreasing size of Si QDs from 8 nm to 2 nm, which is in well agreement with QCE. Furthermore, the PCE of nano-patterned solar cells significantly increases to 10.15% by depositing Si QDs (4 nm)/SiC MLs on the Si light trapping substrate. According to the experimental results, it is inferred that Si QDs/SiC MLs of controllable sizes will be potentially applied to get a better spectral match for advanced high-efficiency photovoltaic devices. 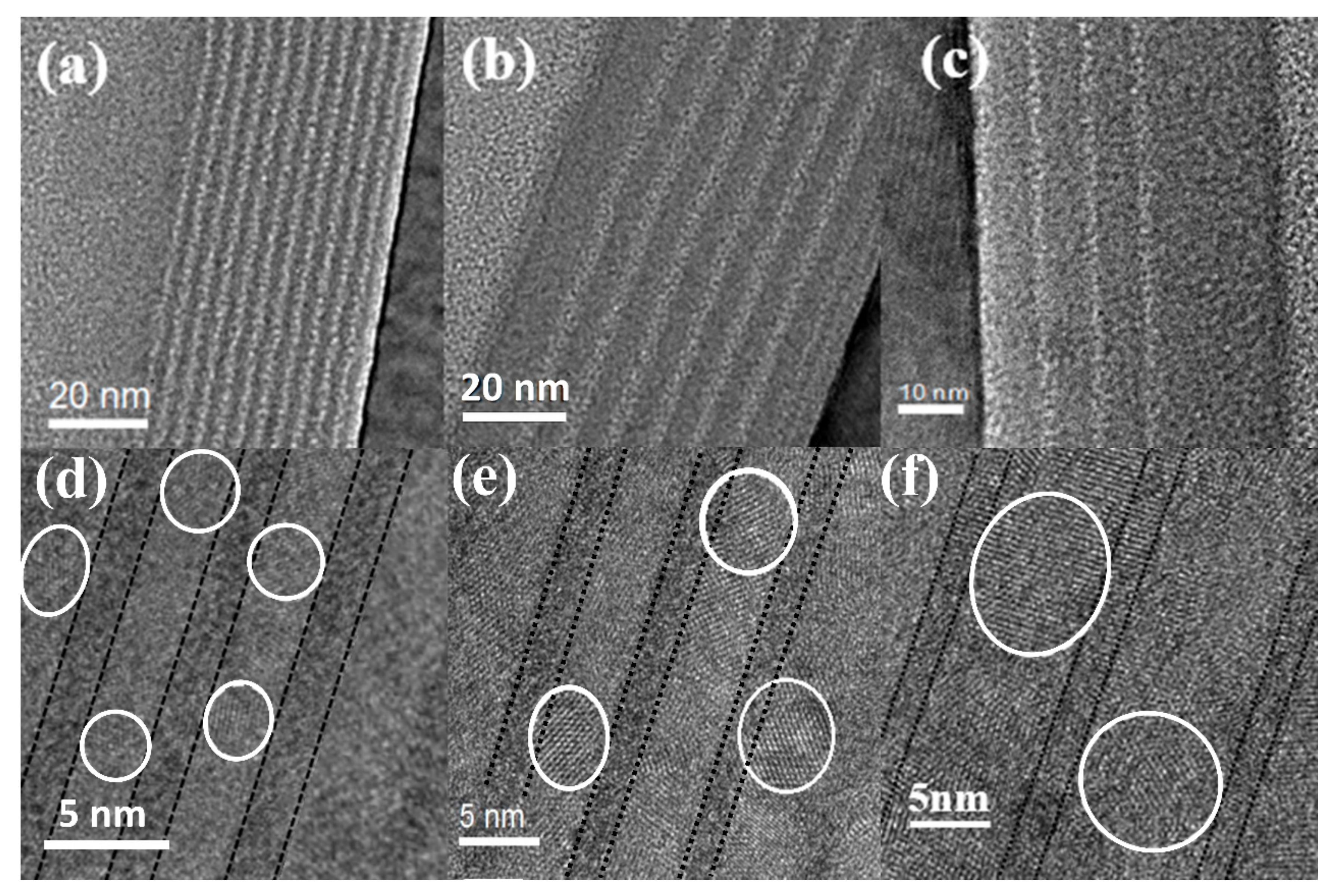 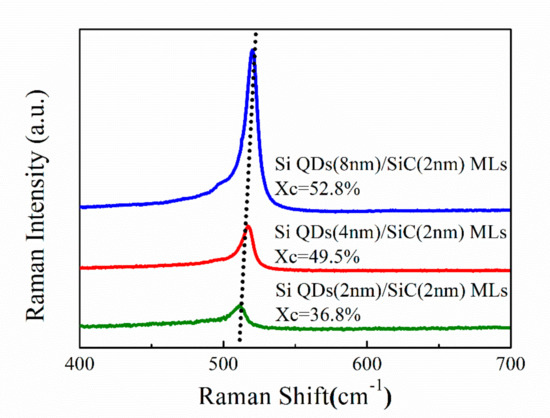 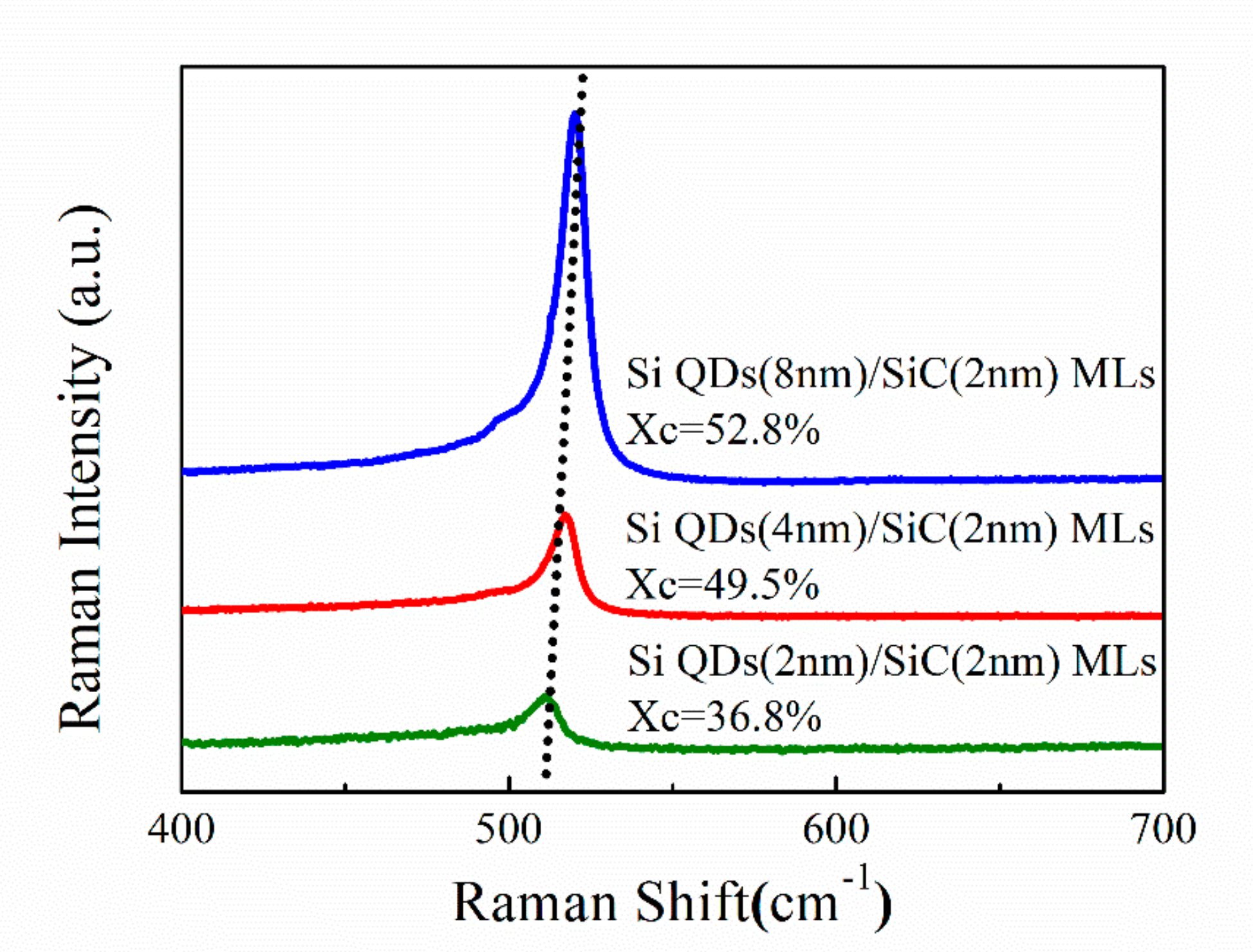 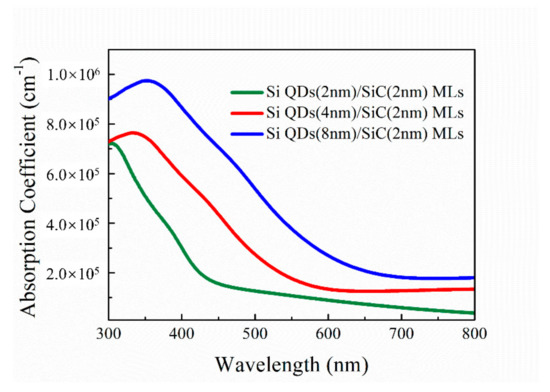 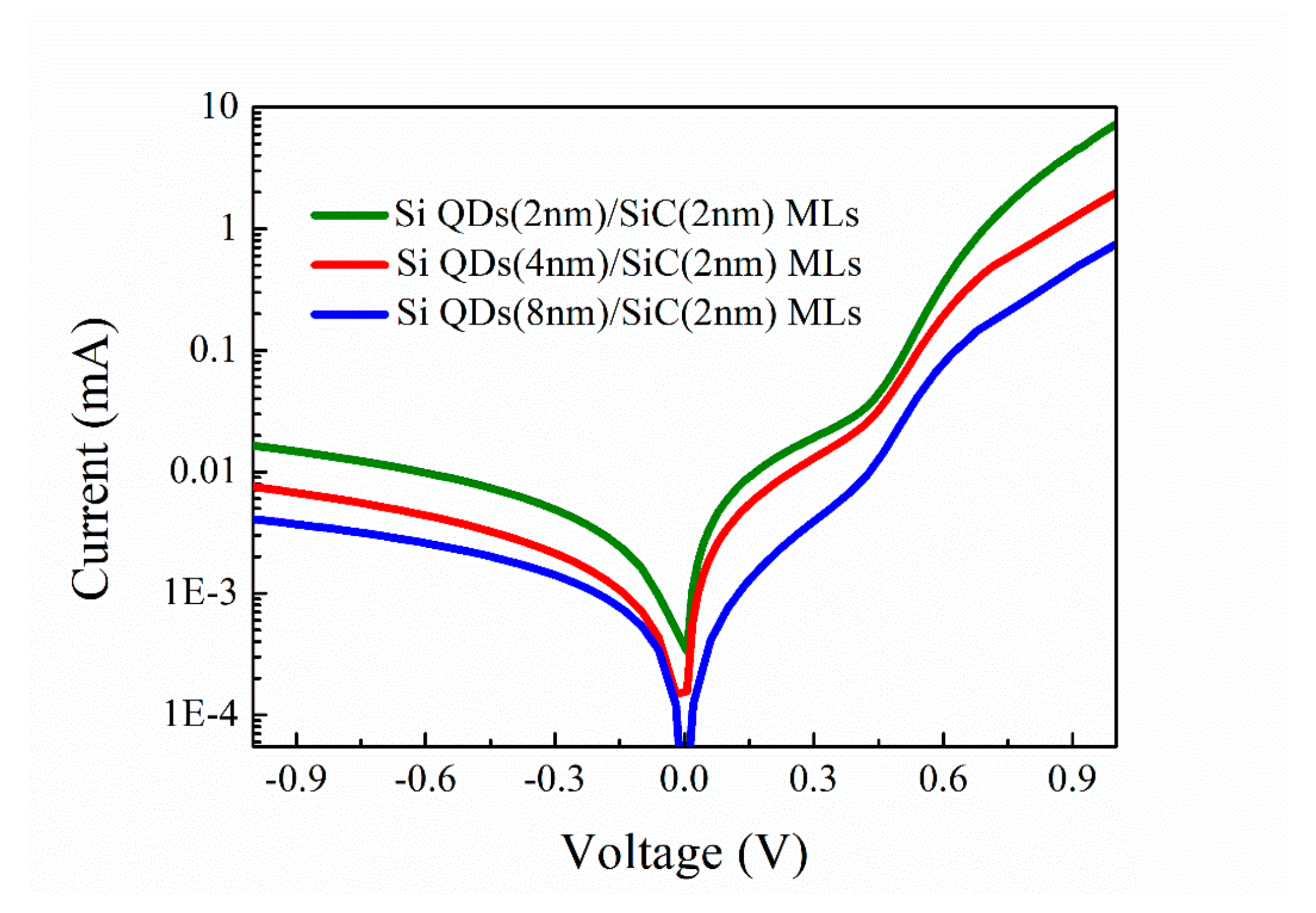 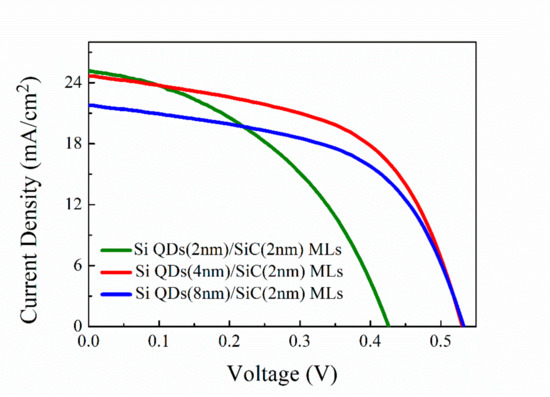