In the DER system considered in this work, the power generation equipment includes a gas engine (GE) and gas turbine (GT), which use natural gas as an energy source, and a photovoltaic (PV) system and wind turbine (WT), which use renewable energy (solar energy and wind energy, respectively). A waste-heat boiler (WB) and absorption chiller (AC) reuse energy in exhaust gas from the GE and the GT. A gas boiler (GB) and compression chiller (CC) use natural gas and electricity to produce hot and cold water, respectively. Heat storage (HS) and cold storage (CS) can store and release hot and cold water, respectively, and adjust energy flow in the system. Figure 1 shows the superstructure of the considered DER system.
In the optimization model, the objective is to minimize the total annual cost CTotal, which is the sum of the equipment capital investment cost CECapital, energy cost CEnergy, and operating and maintenance cost of the equipment CEOM, and then subtract the renewable energy subsidy Rsubsidy, as follows:
Energy cost is the product of energy prices EPriceu of energy form u, the amount of energy purchased EPGk,u at time k, and annual duration hours AHk.
The model contains three types of constraints. The first category of constraints is the selected number and capacity of pieces of equipment. The selected number ni,j of equipment type i with capacity j cannot exceed its maximum available number Ni,j. γi,j is a binary variable that denotes whether equipment type i with capacity j is selected (0 for not selected, 1 for selected). Each equipment type can choose only one type of capacity.
The second category of constraints is the operation characteristics of equipment. For the equipment that utilizes renewable energy (e.g., WT and PV), the generated energy yk,RE,el is dependent on the surface area of the installed equipment WAreajRE, renewable energy intensity Intensk,RE, generation efficiency ηjRE, and the number of pieces of operating equipment δk,RE. Meanwhile, the generated electricity cannot exceed the rated capacity RcapRE,jRE of the operating equipment.
The third category of constraints is the energy balance in the system. The sum of the energy produced by equipment yk,i,u and the purchased energy should not be smaller than the sum of the load demands LDk,u of end users, energy consumption of equipment xk,u, and energy flow in storage Ek,u.
A more detailed configuration of the deterministic mathematical model for the optimal design of DER systems can be found in our previous work [29].

In this study, the proposed interval optimization model for the optimal design of DER systems is applied to a typical hospital in Lianyungang, China.

The city is located in the southern part of a warm temperate zone, with an average annual temperature of 14 °C. It has a humid monsoon with slightly maritime climate due to the regulation of the ocean. The four seasons are distinct. Winter is cold and dry, and summer is hot and rainy. Sunlight is sufficient, and rainfall is moderate. The entire year is represented by three typical days, namely, one for each of winter, mid-season, and summer, in accordance with the characteristics of local climate change. The durations of the three typical days are 120, 92, and 153 days, respectively.
The city has abundant solar energy resources. Annual sunshine time is between 2200 and 3000 h. Total solar radiation for the entire year is between 502 and 586 kJ/cm2. Figure 2, Figure 3 and Figure 4 show the hourly values of temperature, solar radiation intensity, and wind energy density for the three typical days.
In this study, each typical day is divided into 24 periods from 01:00 to 24:00, and each period lasts for 1 h. The whole year is divided into 72 periods. This processing method can effectively alleviate the problem of large-scale mathematical programming while ensuring accuracy.

The hospital selected for the case study has a building area of 294,000 m2. The hospital has cooling, heating, and electricity demands throughout the year, with a high daytime load and a relatively low nighttime load. The hourly load demand of the hospital during the three typical days is shown in Figure 5.

The optimal system configuration, optimal operation strategy, and the interval of the total annual cost of the system under uncertainties were obtained by applying interval optimization to the optimal design of DER systems. The results show the effects of uncertainties on system configuration and economic performance, and identify the most important uncertainty factors in DER systems. Uncertainties exert a cumulative effect on the system results. When more uncertainties are considered in a system, the system is capable of dealing with more complex real-life situations with uncertainties. However, the deviation of the results of the uncertain case from those of the deterministic case may become larger. In Case 4, the midpoint value of the total annual cost of the system increases by 13.2% compared with total annual cost in Case 1. For the system configuration, the installed capacities of the HS and the CS increase by 2 times and 2.5 times, respectively, compared with those in the deterministic case. It can be easily seen that when operation conditions change, the system configuration obtained under deterministic conditions will be inappropriate and system economy will deteriorate. Designing a DER system with a suitable configuration and operation strategy that can achieve potential benefits in practice requires considering uncertainties as comprehensively as possible and incorporating uncertain optimization methods into the optimization process. The proposed interval optimization model in this work can effectively deal with uncertainties in DER systems and obtain an appropriate solution.
In the work [29], which considers uncertainties in DER systems with SO, the normal, uniform, and Weibull distributions are used to describe various uncertainties. In the current work, the only information needed is the upper and lower limit of uncertain variables, which can be obtained more easily and accurately. Compared to work [29], in the current study the total time periods of the whole year increased to 72, and the optimality gap in the solving process decreased to 0, improving the accuracy of the results. At the same time, the solving time of the model on the same computer dropped from several thousand seconds to several hundred seconds, demonstrating the good calculation performance of interval optimization. Moreover, the interval results of interval optimization can provide decision makers with more information, such as the range in which the possible solution may fall, and the sensitivity of results to uncertainties. In addition, the parameters defined in the formulation and solution processes in interval optimization model in this work, such as probability degree and weighting coefficients, can be selected appropriately to meet various requirements, such as improving the expected performance of the system, increasing robustness to uncertainties, enhancing objective performance, or increasing the reliability of the solution and satisfaction of the constraints in accordance with the attitude of decision makers toward risks and actual conditions.
This research verifies the effectiveness of interval optimization in the optimal design of DER systems under uncertainties. The interval optimization model proposed in this work can be easily extended to more complex energy systems or applied to other real-world problems. By using this method, decision makers cannot only obtain an optimal and robust solution under interval uncertainties, but can also be aware of the uncertainty level of the solution and its sensitivity to uncertainties.

An interval optimization-based model for the optimal design of DER systems is proposed in this study, considering uncertainties in energy prices, renewable energy intensity, and load demands, which are presented as interval numbers. On the basis of the order relationship and probability degree of interval numbers, the proposed uncertainty interval optimization model is transformed into a multi-objective deterministic mathematical model, which is further transformed into a single-objective deterministic mathematical model by incorporating a weighting coefficient. The proposed model is applied to a typical hospital in Lianyungang, China, and its effectiveness is verified. Four cases under a deterministic and uncertain environment are designed, and the effects of uncertainties on system optimal configuration and economic performance are analyzed. The optimal operation strategy under uncertainties is also determined. A sensitivity analysis is conducted to analyze the effects of weighting coefficient and probability degree on the interval of total annual cost.
The results show that uncertainties in energy prices and load demands exert significant effects on system configuration and economic performance, primarily affecting the installed capacities of the GB, HS, and CS. The three uncertainties have a cumulative effect on the system optimization results, indicating the importance of comprehensively considering uncertainties. Weighting coefficients and probability degree can be appropriately selected to achieve the designed objective performance in interval optimization. Overall, the application of interval optimization to the optimal design of DER systems can effectively handle various uncertainties and help decision makers obtain a solution that is robust to uncertainties and to become aware of the sensitivity level of the solution to uncertainties.
In the future, other uncertainties in DER systems can be incorporated and considered to obtain a more comprehensive result that is closer to reality. Moreover, a more effective solution method can be developed to address the transformed multi-objective problem in the objective function. Finally, in recent years the importance of considering the rebound effect in energy forecasts has been recognized [35], and the related work in the field of DER systems can be carried out.

This research was funded by the National Natural Science Foundation of China (No.51576190). 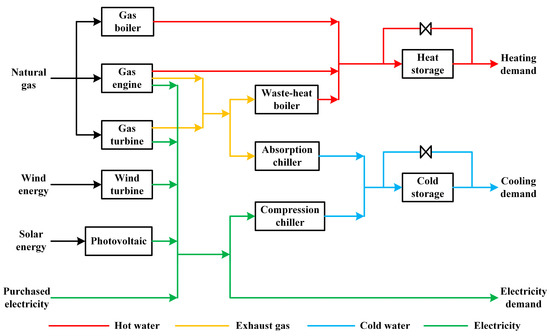 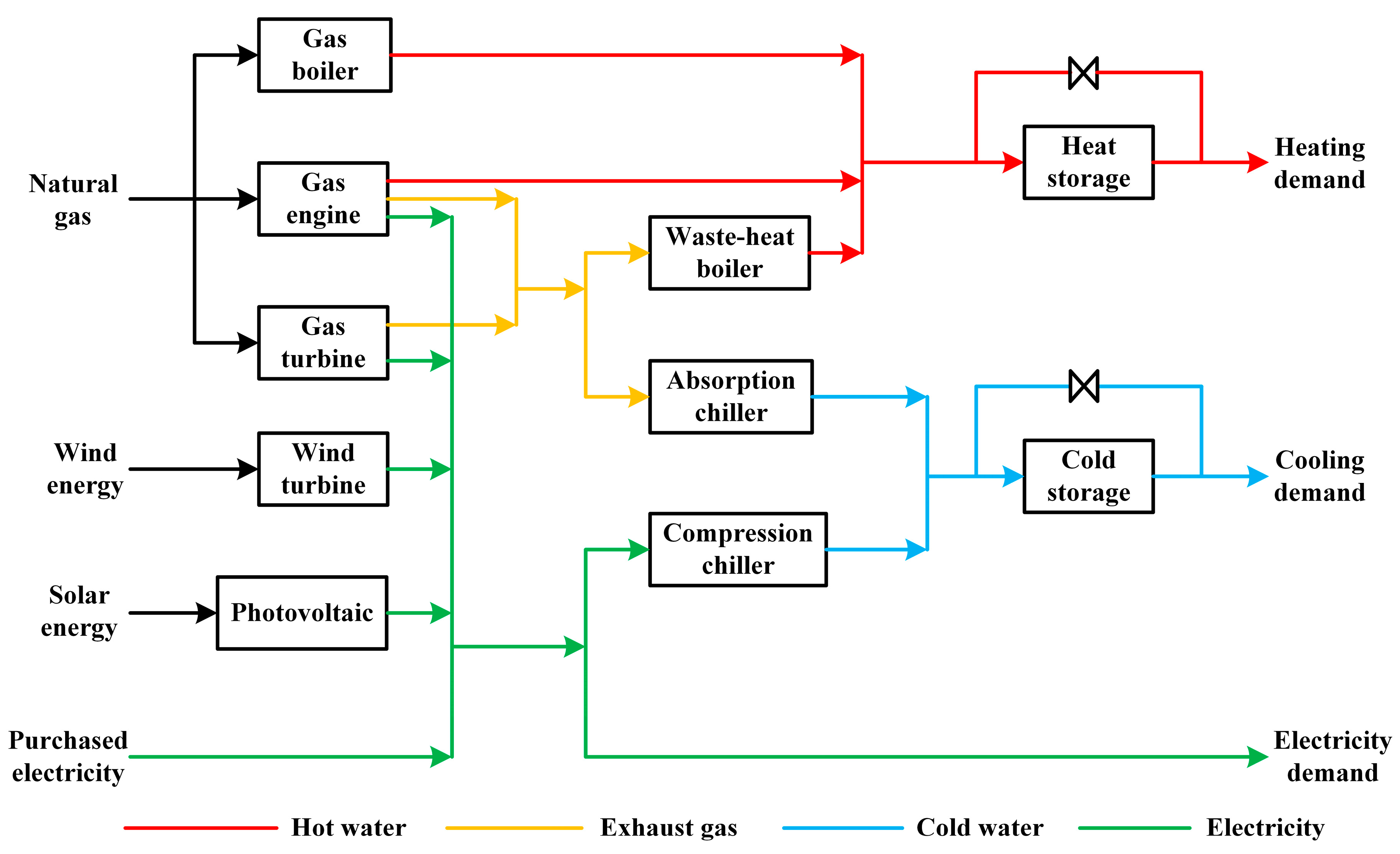 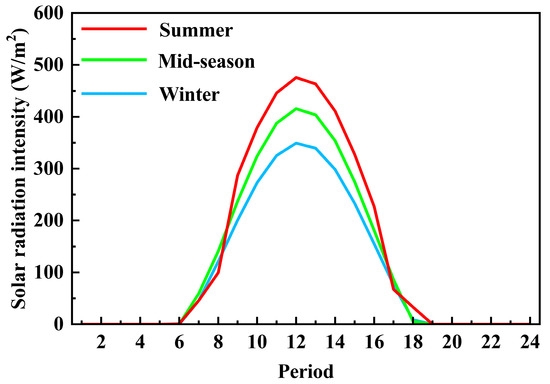 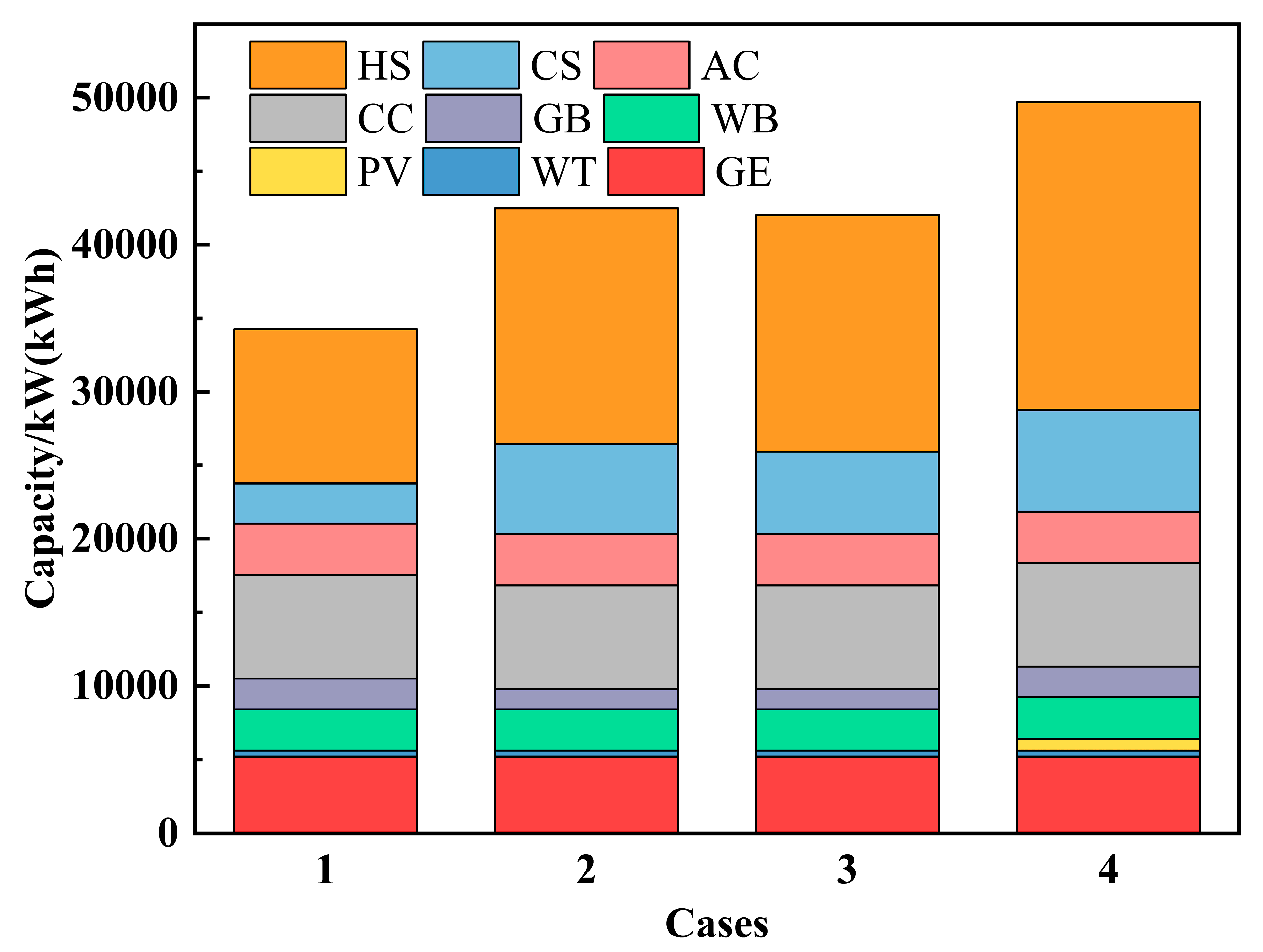