Fuel cells, supercapacitors and metal-air batteries are front runners in the race to find the next generation of energy sources that will power various electronic products, from large electronic devices such as electric vehicles, to small electronic devices such as wearable electronics. For these energy sources to become ubiquitous, fuel cells, supercapacitors and metal-air batteries all need oxygen reduction reaction (ORR) catalysts that have superior performance and cost competitiveness compared to what is available now [1,2,3,4,5,6,7,8,9,10,11,12,13,14,15,16,17,18]. Despite the fact that precious metals such as Pt and Pt-based alloys have been considered superior electrocatalysts for ORR over the last few decades [6,7], many research groups have been focusing on developing precious metal-free catalysts because of the high expense and restricted amounts of precious metal catalysts [8,9,10,11,12,13,14,15,16,17,18].
Carbon materials have been widely used in diverse areas, especially in energy devices, due to their high electrical conductivity, large surface area, chemical stability and low density. Recently, heteroatom-embedded carbon materials such as carbon, [8,9,10,11] carbon nanotubes [12,13,14], graphene [15,16] and graphene nanoplates [17] have been regarded as alternatives to Pt-based catalysts because of their superior catalytic performance in ORRs. Among the various carbon materials, carbon nanofiber (CNF) prepared by electrospinning has exhibited higher electrical conductivity and a larger specific surface area than commercial carbon particles. The high electrical conductivity of CNF originates from minimized resistance due to electrons moving smoothly along the axis in the direction of the uniformly arranged fibers. In addition, nonwoven CNF can be used directly as a self-standing electrode without any additional binder materials. Electrospinning is a unique method that can manufacture nonwoven nanofiber using electrostatic repulsion and an electric field between two electrodes (syringe and collector) that supply high voltage to a polymer-based solution [17,18,19,20,21]. Polyacrylonitrile (PAN) is one of the raw materials used for preparing CNF via electrospinning. The nonwoven web obtained from electrospinning is produced in the form of a carbon nanofiber web through stabilization and carbonization. As PAN has a nitrogen atom in its polymer chain, several research groups have prepared the N-doped CNF with PAN nanofiber and investigated its catalytic properties for ORR [21]. However, the N-doped CNF exhibited insufficient catalytic properties which may be related to the amount of nitrogen in the CNF. During stabilization and carbonization, some nitrogen atoms may have been embedded in the carbon lattice, however almost all nitrogen was removed from the PAN molecules during production.
In this study, we prepared Mn-N-C catalysts by electrospinning a solution and added a small amount of manganese ions to the PAN solution. The Mn-N-C structure or MnO-embedded carbon nanofibers were fabricated by controlling the amount of manganese added. The carbon nanofibers with an Mn-N-C structure exhibited stable catalytic properties.

Manganese nitrate-embedded Polyacrylonitrile (PAN, Sigma Aldrich Co.) fibers were fabricated by electrospinning the polymer solution, which consisted of the desired amount of manganese acetate and 10 wt.% PAN polymers dissolved in N,N-dimethylformamide (DMF, Samchun Pure Chemical Co., Ltd.). The amount of manganese acetate ((CHCO2)2Mn·4H2O, Sigma Aldrich Co.) was adjusted by calculating the number of manganese ions to give 10 at.% and 40 at.% of the nitrogen contained in the PAN monomer. The composite solution was electrospun in the form of a fiber web through a positively charged capillary tip of 0.5 mm in diameter using a power supply (Conver Tech., Korea). The electrospun fibers were collected as a web on a metal collector rotating at approximately 300 rpm. For electrospinning, the supplied voltage was 18 kV, the distance from the syringe needle tip to collector was 18 cm and the flow velocity of the solution was 1 mL/h. Electrospun fibers were stabilized by heating to 553 K at a rate of 1 K/min in air and then kept at 553 K for 1 h. The stabilized fibers were carbonized by heating to 1073 K for 1h in CO2. The CNFs were designated as CN, CN-Mn1 and CN-Mn2 as a function of the amount of Mn precursor contained.
Morphological observations of the electrospun and manganese-embedded carbon nanofibers were conducted by scanning electron microscopy (FE-SEM, Hitachi, S-4800, Japan). The weight loss of the electrospun PAN fibers was estimated by thermogravimetric analysis (TGA, PerkinElmer, TGA8000, USA). The specific surface areas and pore size distributions were evaluated using the Brunauer–Emmett–Teller (BET) equation (BELSORP-mini II, Mictrotrac-BEL, USA). The X-ray diffraction (XRD) pattern was conducted with a MiniFlex (Rigaku, Japan). Transmission electron microscope (TEM) observation was performed with a JEM-2100 (JEOL, USA).
Rotating disk electrode (RDE) tests were carried out using an electrochemical workstation and computer-controlled potentiostat (SP-300) between −0.8 V and 0.2 V at a scan rate of 50 mV/s in 0.1 M KOH solution as electrolyte. A platinum wire was used as a counter electrode and an Hg/HgO (1 M NaOH) electrode was used as the reference electrode. The working electrodes were fabricated by applying each of the catalyst inks onto a prepolished glassy carbon (GC) disk electrode (5 mm in diameter). The electrocatalyst (15 mg) was dispersed in ethanol (1.0 mL) and ultrasonicated for 30 min. A total of 5 μL of catalyst ink was applied onto the working electrode and dried at room temperature for 15 min before electrochemical tests. The loading of the catalysts for all the measurements was maintained at 0.382 mg/cm2. Linear sweep voltammetry (LSV) data values measured using an Hg/HgO (1 M NaOH) reference electrode were converted to LSV data values at the reversible hydrogen electrode (RHE) reference electrode using a calculation formula (ERHE = EHg/HgO + 0.059 pH + E°Hg/HgO). Cyclic voltammograms were carried out using a BCS-815 electrochemical workstation using a 6 M KOH as electrolyte at potential ranging from 0 to 0.9 V and scan rate of 2 mV/s. The electrode was prepared by mixing 80 wt.% of electrode active material, 10 wt.% of the polyvinylidene fluoride (PVDF, mol weight (MW) ≈ 534,000 g·mol−1, Sigma Aldrich Co) as binder, 10 wt.% of Super-P as conductive carbon material and N-methyl-2-pyrrolidone as the solvent for preparing a slurry. The slurry was pressed onto the nickel foam and dried at 373 K in a vacuum oven for 1 h. The electrochemical cells were prepared with the electrode materials on nickel foam as current collector and polypropylene separator (Cellgard 3501, Scimat Co., UK).

Manganese-embedded carbon composite nanofibers were synthesized by a procedure of stabilization and activation after the use of an electrospinning technique. Manganese in the carbon fiber formed Mn-N-C or MnO depending on the amount of manganese precursor used. The electrocatalytic performance of the MnO significantly decreased during durability testing due to changes in the crystal structure of manganese oxide. On the other hand, the Mn-N-C catalyst showed stable catalytic properties. In an electrode test of a supercapacitor, the specific capacitance of the carbon nanofibers without manganese was 142 F/g, whereas the specific capacitance of the carbon nanofibers containing Mn-N-C compounds was 208 F/g.

This research was funded by Wonkwang University in 2018. 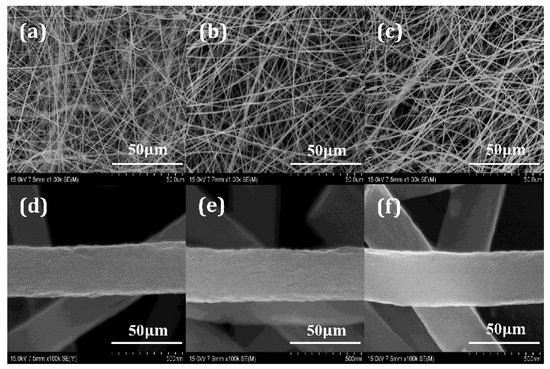 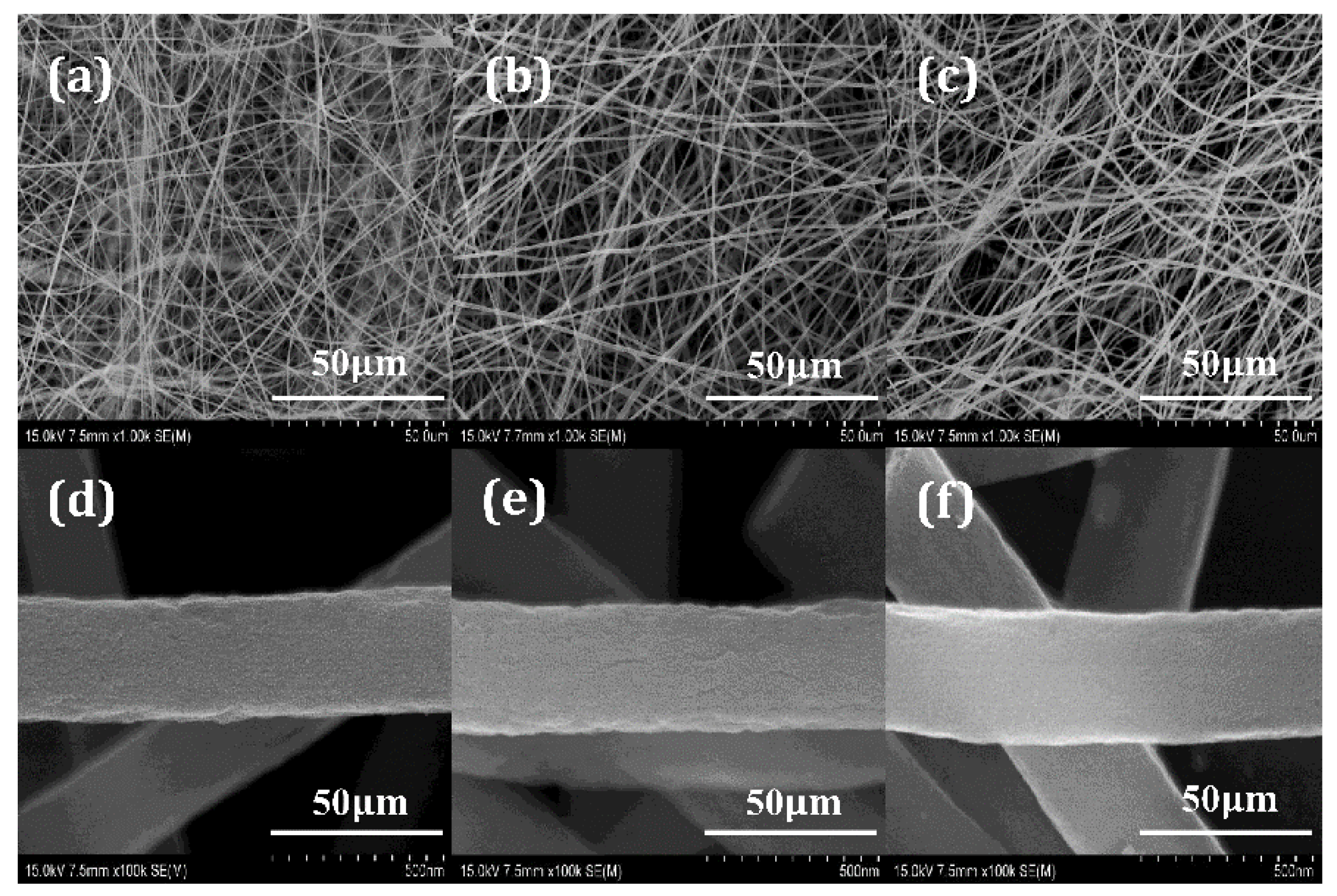 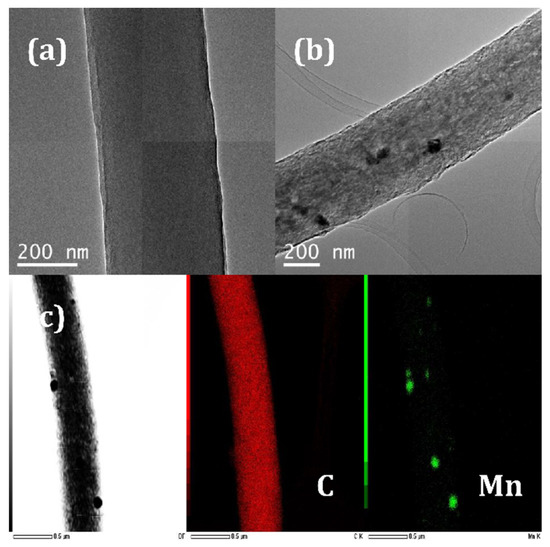 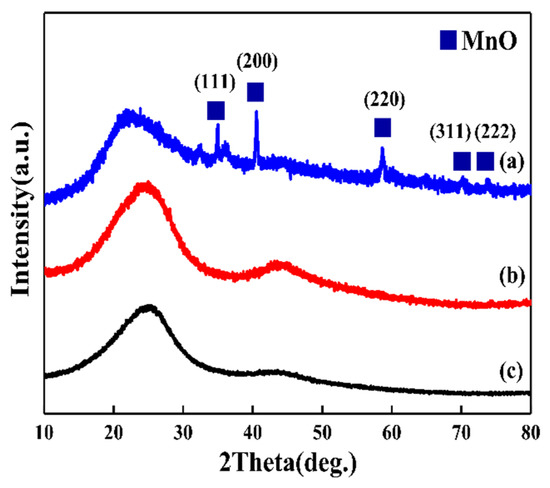 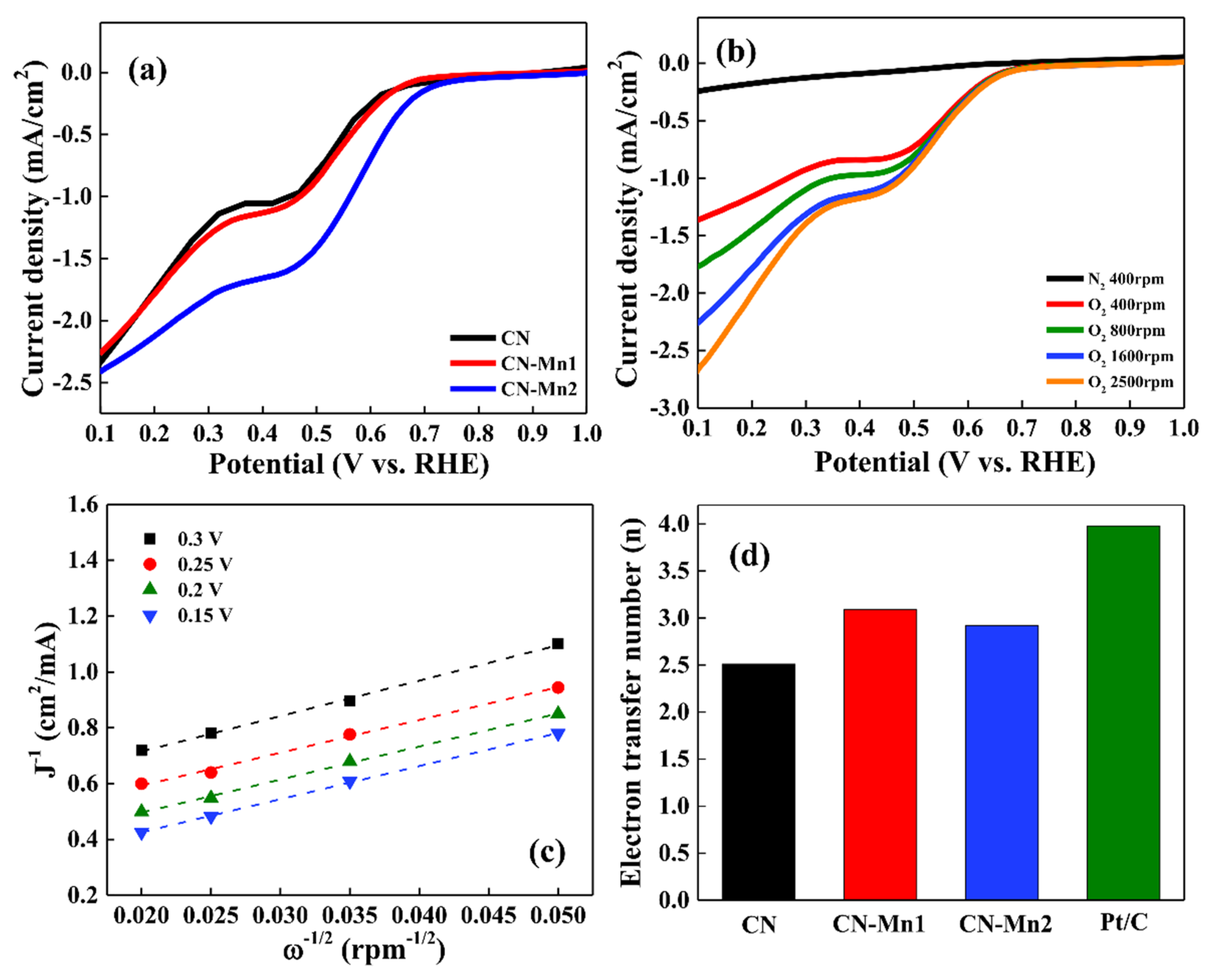