Light emitting diode (LED) lighting has become more popular in recent years, particularly as product energy efficiency has become more important to consumers [1,2,3]. Compared with conventional lighting equipment, LEDs are brighter and have a longer service life. LEDs have thus been used in various lighting scenarios, such as street lighting, indoor lighting, and backlighting. They have also been used for lighting equipment with high power requirements, like baseball field or basketball court lights. Most of these LED driver circuits have a two-stage architecture consisting of a power factor correction converter in the first stage and an isolated buck converter in the second stage, with an LLC resonant converter usually employed as the second-stage circuit [4,5].
Unlike other common isolated buck converters, an LLC resonant converter is characterized by power components with zero voltage switching (ZVS) and zero current switching at the high—and low—voltage ends, respectively, in a full load range. Additionally, unlike phase-shifted full-bridge converters, an LLC converter has no output inductance at the low-voltage end and thus has higher conversion efficiency [6]. Moreover, to achieve high power density, increasing the switching frequency of the power switch reduces the volume of the magnetic component; however, this is accompanied by a considerable increase in switching loss. Therefore, in addition to the ZVS feature of the LLC resonant converter, wide-band-gap switch components should also be employed to reduce the switching loss under high-frequency operation [7,8]. Additionally, selecting an appropriate LLC resonant converter architecture can further optimize the efficiency and reduce component stress [9,10,11]. The topologies commonly used in the high-voltage end of the LLC resonant converter are the half bridge and full bridge, whereas those used in the low-voltage end are the full bridge or center tap.
To achieve high power density, the leakage inductance of the transformer in this study was used as the resonant inductor of the circuit [12,13,14], which reduces the number of magnetic components required. Previous research replaced the resonant inductor with the leakage inductance of the transformers, mostly through winding the transformer using litz wire and setting the operating frequency between 50 and 200 kHz. However, when the operating frequency is between 500 kHz and 1 MHz, the litz wire is usually replaced by printed circuit board (PCB) windings to reduce the alternating-current (AC) resistance of the copper traces under high-frequency operation. Additionally, the primary- and secondary-side windings are interleaved to weaken the proximity effect. This approach reduces proximity-effect-induced loss and minimizes the leakage inductance of the transformer [15,16,17], which is a disadvantage in LLC resonant converters that require leakage inductance to design resonant tanks. A conventional method for increasing the leakage inductance is to increase the spacing between the primary and secondary sides [18,19,20], which is mostly achieved using a non-interleaved winding that leads to a sharp rise in the proximity-effect-induced AC loss. Therefore, the concept of adjustable leakage inductance [21,22] was adopted in this study, with an additional reluctance length added between the primary-side and secondary-side windings of the transformer. This enabled the magnetic flux generated by the primary-side winding to flow into the added reluctance length, thereby increasing the primary-side leakage inductance. The proposed approach weakens the proximity effect in the interleaved winding and attains the objective of increasing the leakage inductance. Compared to existing LED power converter designs [23,24,25], this work reduces the switching loss via wide bandgap devices and soft switching techniques under 500 kHz switching frequency conditions and utilizes an integrated transformer without an additional resonant inductor to achieve high power density. Ultimately, an LLC resonant converter with an output power of 1 kW, switching frequency of 500 kHz, input voltage of 400 V, and output voltage of 300 V was achieved in this study.
In this study, a second-stage LLC resonant converter was proposed for the LED driver circuit, and the LLC resonant circuit was used as a direct-current transformer (DCX) to operate the driver circuit at high efficiency. In addition, this study also designed and optimized the primary- and secondary-side topologies and magnetic components in the LLC resonant converter. In Section 2, under the conditions of 1 kW output power, 400 V input voltage, and 300 V output voltage, the loss and component stress at the primary—and secondary—side structures of the converter are analyzed and a topology suitable for the specification in this study is selected. Section 3 details the mathematical induction of adjustable leakage inductance and the appropriate number of primary- and secondary-side windings for the new core based on the optimal point of core loss and copper loss. The feasibility of the designed core structure was verified using ANSYS Maxwell software (ANSYS, Canonsburg, PA, USA). Section 4 presents the experimental results, including temperature distribution maps.

An LLC resonant converter with 1 kW output power and 500 kHz switching frequency was proposed in this study. Figure 16a,b shows the actual core size and circuit diagram, respectively. Table 6 details the components and design parameters used in this study.
Figure 17 plots the measured conversion efficiency of the converter. The highest efficiency of 97.03% was achieved at 80% load. Figure 18 displays the circuit test waveform at full load, which includes the waveforms of Vds, Vgs, and the resonant current ILr of the primary-side power switch operating properly. Figure 19a–c shows temperature distribution of the primary-side power components at full load, with maximum temperatures of 38.1 °C, 40.4 °C, and 78.6 °C, respectively. Because the specifications of this paper are high-voltage to high-voltage, according to the loss analysis in Figure 4, the loss can be mainly attributed to the transformer, especially, on the transformer windings. Because the primary or secondary switching elements have zero-voltage-switch turn-on, the temperature distribution of the overall converter will be concentrated on the windings of the transformer.

This study determined the primary-side topology and secondary-side rectification topology suitable for an LLC resonant converter under a switching frequency, input voltage, and output voltage of 500 kHz, 400 V, and 300 V, respectively. After loss analysis and determining the rated voltage and current of the components, the full-bridge topology was selected for both the primary and secondary sides. This study also investigated the small transformer leakage inductance caused by an interleaved winding structure, which was employed to reduce the winding MMF of the transformer under high-frequency switching. The adjustable leakage inductance structure was thus adopted in this study, and the influence of core shape on current distribution was explored. Subsequently, the feasibility of the core was verified through simulation using ANSYS Maxwell software. Ultimately, an LLC resonant converter with 1 kW output power and 500 kHz switching frequency was designed and tested. The results verified a maximum conversion efficiency of 97.03%.

The authors declare no conflict of interest. The funders had no role in the design of the study; in the collection, analyses, or interpretation of the data; in the writing of the manuscript, or in the decision to publish the results. 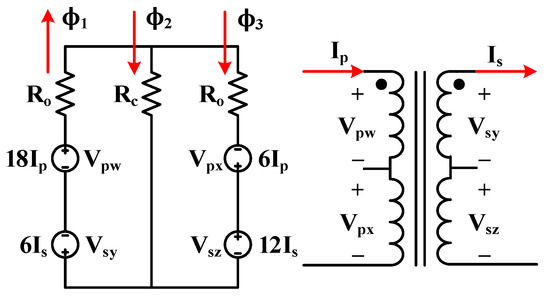 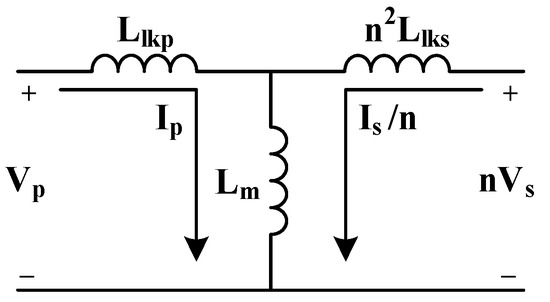 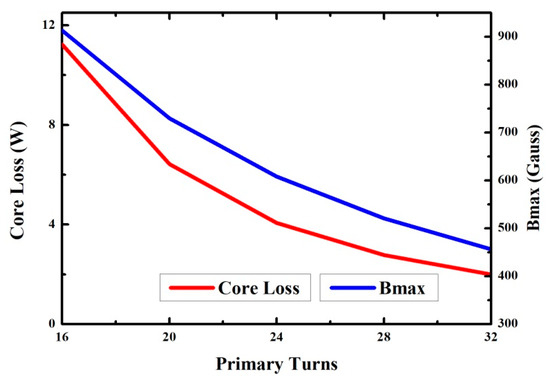 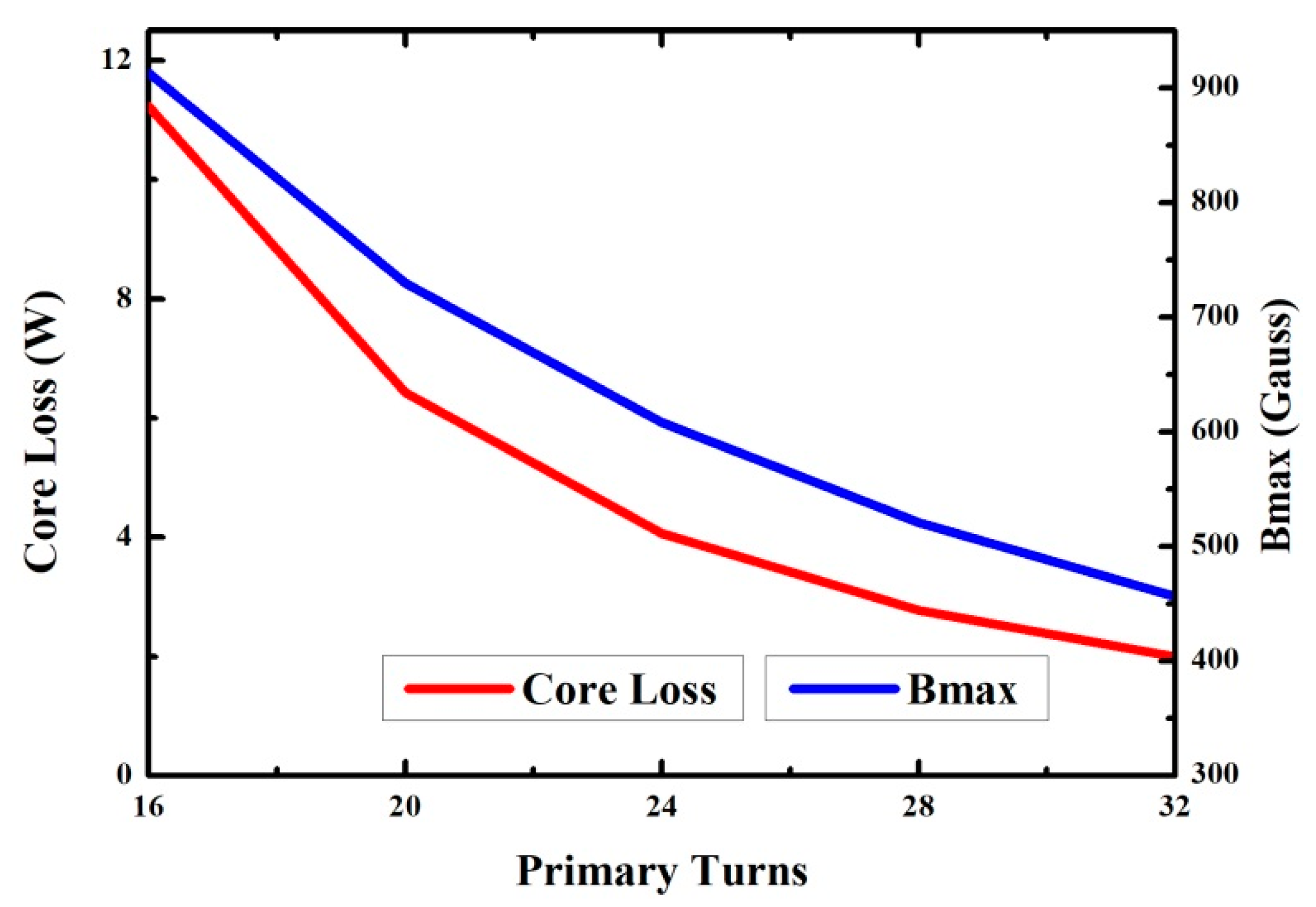 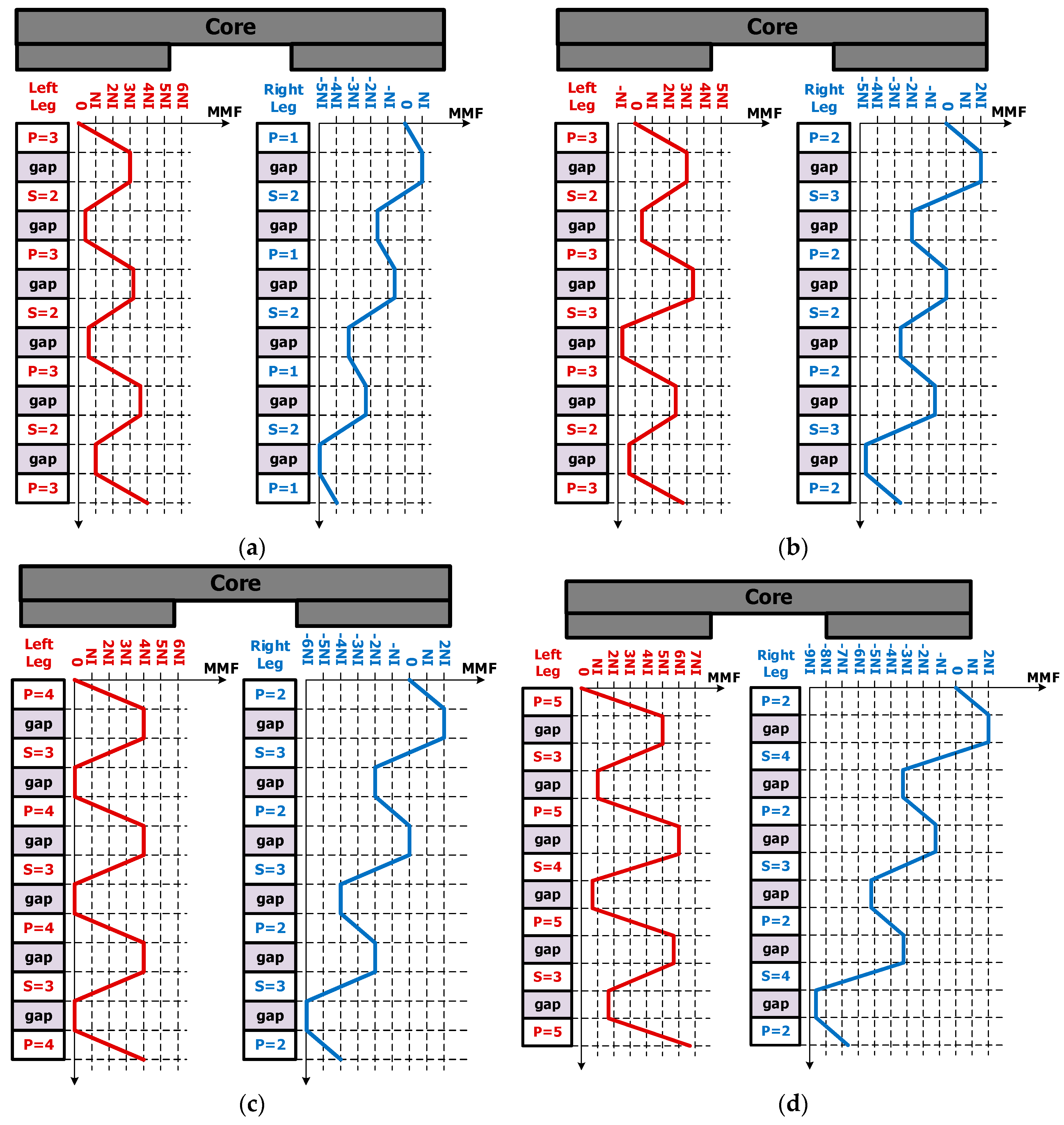 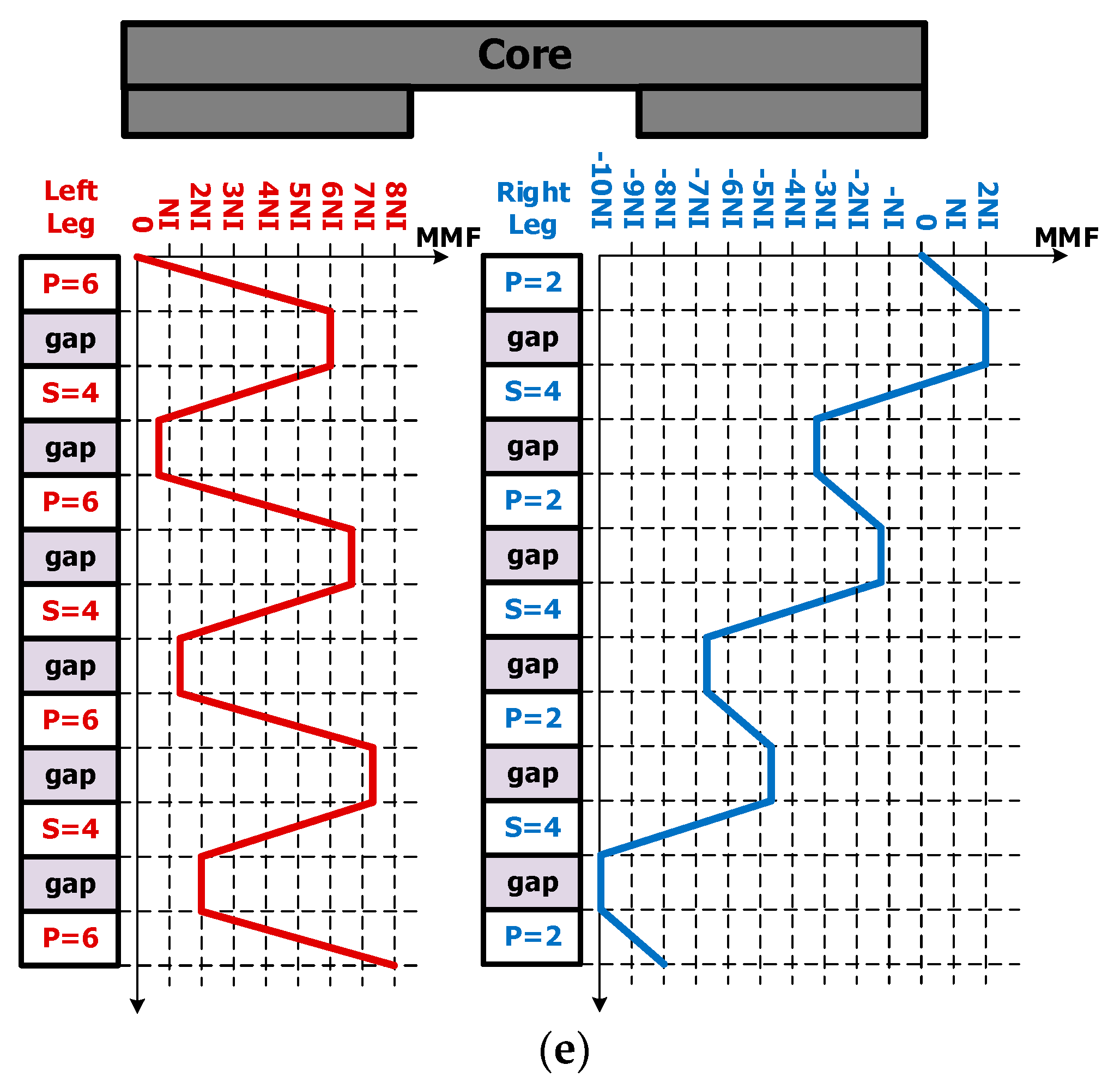 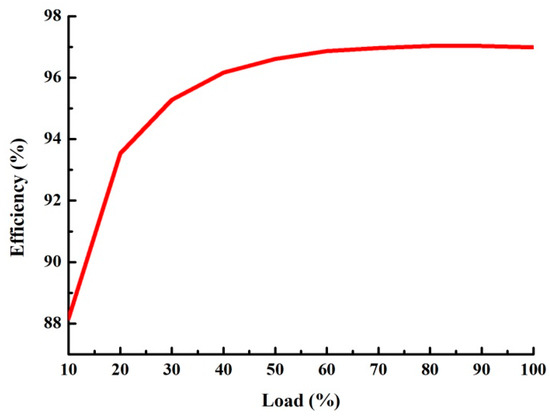 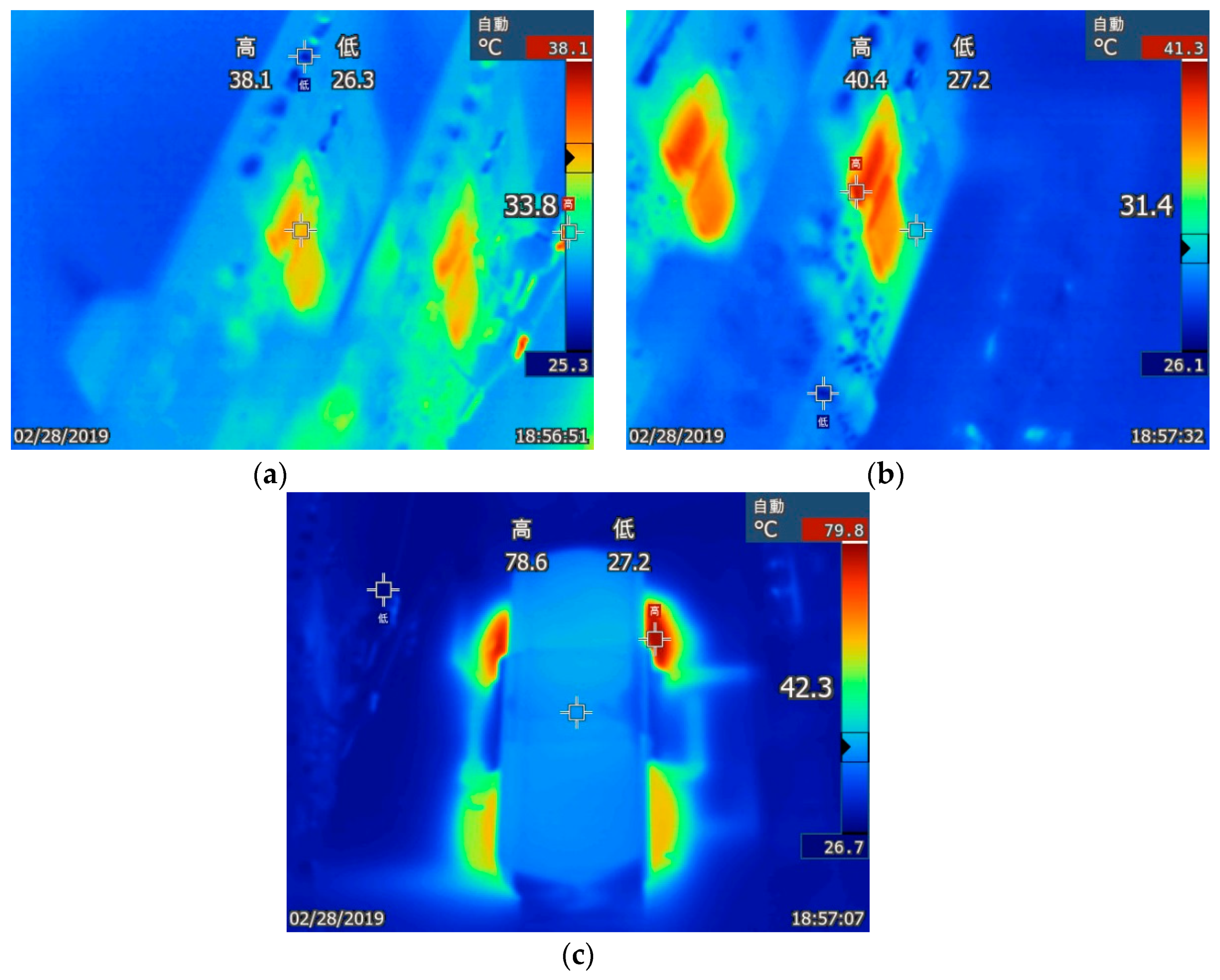 Table 6. Parameter design of the asymmetric resonant tank.
Table 6. Parameter design of the asymmetric resonant tank.
© 2019 by the authors. Licensee MDPI, Basel, Switzerland. This article is an open access article distributed under the terms and conditions of the Creative Commons Attribution (CC BY) license (http://creativecommons.org/licenses/by/4.0/).
We use cookies on our website to ensure you get the best experience. Read more about our cookies here.
Accept
We have just recently launched a new version of our website. Help us to further improve by taking part in this short 5 minute survey here. here.
Never show this again