:
One of the most effective ways to reduce greenhouse gas emissions is the widespread use of solar panels. A new approach to estimating the annual energy output ESC of liquid-based solar thermal collectors is presented in this paper. The main parameters of the surrounding environment that affect the energy yield from solar water heating (SWH) systems are total solar radiation ES and outdoor air temperature θO. Here, two functions are developed that allow the specification of the ESC value based on these two previously determined factors. The article presents the subsequent stages that led to the development of this method. In the first step, the computer model of a solar domestic hot water (SDHW) system was built in the EnergyPlus environment. An object of the modeling procedure was the real solar installation located at Bialystok University of Technology. The database containing the annual energy output of the solar collectors, total solar radiation, and outdoor air temperature was developed based on the results of simulations made for 24 Polish cities. Then, the multiple regression method (implemented in Statistica v.13.1) was used to correlate these variables. Two contour graphs were also developed to determine the energy yield from solar collectors.
Keywords:
solar energy; evacuated tube collectors; flat plate collectors; solar domestic hot water system; multiple regression method

Due to global warming, more and more drastic actions are being taken to reduce greenhouse gas emissions. The European Commission, newly appointed in 2019, wants carbon dioxide emissions to be reduced by at least 50% by the year 2030. In contrast, in Poland, an increase in CO2 emissions has been observed for the last four years. According to the latest BP (British Petroleum) statistical report [1], Poland has released 292.9 (in 2015), 305.6 (in 2016), 315.4 (in 2017), and 322.5 (in 2018) million tonnes of this gas into the atmosphere. This is the fifth highest value in Europe in terms of CO2 emissions, after Germany (725.7 MtCO2e/year), the United Kingdom (394.1 MtCO2e/year), Turkey (389.9 MtCO2e/year), and Italy (336.3 MtCO2e/year). The obvious reason for this phenomenon is that the base fuel in the Polish energy sector is still coal. Under pressure from other European Union members, Poland will have to radically adapt its policy related to reducing the amount of greenhouse gases emitted. The only reasonable step in this direction will be a radical increase in financial support for the development of renewable energy sources. This undertaking must be preceded by precise economic analysis. The purpose of this article is to present a simple but accurate method for determining the amount of energy that can be obtained from solar collectors.
The energy yield from solar water heating (SWH) systems, in which the direct conversion of solar energy takes place, can be estimated using different methods [2]. The first and simplest approach for the assessment of solar thermal systems can be used when the operating temperature of panels is possible to estimate and the amount of the mean overall solar radiation on a horizontal surface is known. The Utilizability Method developed by Gordon and Rabl [3] and Pareira et al. [4] can serve as a representative example. The critical radiation intensity above which the energy yield from the solar installation can be obtained is determined in this method. The calculation algorithm allows the monthly amount of energy supplied by the system to be obtained, taking into account the amount of incident solar radiation, outdoor temperature and energy demand by the user. This method is based on the results of experimental data which were collected over a period of 40 years. The second category contains methods that are developed on the basis of the analysis of multi-variant detailed computer simulations and are in the form of—sometimes very complex—correlations. The f-Chart method [5] is a representative example in this group. It is a widely used design tool for assessing the energy efficiency of the popular technical layouts of the solar installations. The calculation algorithm is based on a function that determines the share of solar energy in covering the energy demand for hot water preparation. There are two independent dimensionless variables in this function. Two groups of design and operational parameters affect the value of these variables. The error of the f-Chart method, depending on the accuracy of the assumptions, is estimated to be 5% to 10% [6]. The third and last category includes energy computer simulations. The most popular computer programs, such as TRNSYS, EnergyPlus, T*SOL, Polysun, RETScreenl, GetSolar, and many others, are used for modelling the operation of solar systems supporting hot water preparation. The calculations are usually carried out on an annual basis with an hour or shorter time step and use domestic hot water usage schedules. Detailed data containing basic parameters of outdoor air and solar radiation contained in a typical meteorological year (TMY) ensure the high accuracy of this type of computer simulations. A slightly different approach to thermal performance analyses of SWH systems is shown in this article. Using the method presented here, a designer can easily determine the required number or the area of solar collectors. The calculation algorithm consists of not very complicated mathematical relationships, which are presented in Chapter 3. The most important parameter, which is the energy yield from solar collectors, is only dependent on the panel type and its location. This value can be determined on the basis of the contour charts or tabular data shown in Chapter 3. The main advantage and the novelty of this new method is the greater simplicity of calculations and that it ensures high accuracy when estimating the annual energy output of liquid-based solar collectors. It should be noted that the above-mentioned building energy simulation computer programs are used to simulate the operation of SWH systems over longer periods of time; i.e., for transient modelling. The method presented here is dedicated to the installation design and not to the analysis of its parameters in unstable conditions.

2. Description of the Method to Determine the Annual Useful Energy Produced by Solar Collectors

The total solar radiation is the main parameter of the surrounding environment that affects the energy yield from SWH systems. The second factor which determines the amount of heat loss and also reduces the efficiency of solar panels is the outdoor air temperature. Therefore, it was decided to develop a function that would allow these values to correlate with each other.
For this purpose, the multiple regression method was used. It allows the quantification of the relationships between independent variables (solar radiation, outdoor temperature) and the dependent variable (useful energy). The regression model formula is determined in such a way as to minimize the difference between the modelled (predicted) value and the actual (resultant) value of the dependent variable.
In order to create a database of these independent parameters to develop the correlation, it was decided to perform a number of computer simulations. The real solar domestic hot water (SDHW) system, located on the roof of the Hotel for Research Assistants on the campus of Bialystok University of Technology (BUT) (Poland), shown in Figure 1, was the model object.
The SDHW system in the test includes 21 evacuated tube collectors (seven rows of three panels in each), 35 flat plate collectors (seven rows of five panels in each) with a total gross area of 146.3 m2, and eight tanks (four for each loop) with a total capacity of 8 m3. Figure 2 shows a simplified hydraulic diagram of the analysed water heating system supported by solar collectors. This installation is equipped with a measuring system consisting of 17 heat meters, 42 resistance temperature sensors and four recorders of electricity consumption. In addition, the data acquisition system reads the basic parameters of outdoor air and solar radiation every 5 s from a weather station which is located near the collectors. A detailed description of the project and the solar system implemented under this project are included in [7,8].
In the first stage, it was decided to develop a model of the SDHW system in the EnergyPlus environment. The following assumptions were made by creating this 3D model:
The arrangement of collectors and shading elements assumed in the SDHW model in a 3D view is presented in Figure 3.
The results of computer calculations were compared with the measurements taken in 2015–2017 to validate the developed model. The difference between the measured amount of energy produced by the solar installation and the calculation results was about 7% for evacuated tube collectors and only from 4% to 5% for flat plate panels. These discrepancies are caused by a greater or lesser match between the actual optical–thermal characteristics and the parameters of the panels given by the manufacturer. However, both values are within the allowable error for this type of energy simulation. Thus, the model can be assessed as accurate for the purpose of all kinds of economic analyses. The detailed procedure and results that were used to evaluate the accuracy of the EnergyPlus model can be found in the doctoral dissertation of Paulina Radzajewska [11].
In the next stage of this project, it was decided to estimate the energy yields from the SDHW system in other locations in Poland. All shading elements (Figure 4) which are located on the roof of the hotel were removed from the model to obtain more objective results.

A new method to determine the useful energy yield from liquid-based solar collectors ESC in operating conditions in Poland is presented in this article. The bases of the calculation algorithm are two equations: Equations (1) and (2). The calculation of the energy output from a 1 m2 absorber surface of flat plate and evacuated tube solar collectors requires the predetermination of two parameters: these are the total solar radiation ES and the annual average temperature of the outdoor air θO. Alternatively, to determine the value of ESC, one can also use the two contour graphs (Figure 7 and Figure 8) included in this paper. The method was developed on the basis of results obtained from computer simulations and using the multiple regression method.
The similar relationships and graphs shown in Figure 7 and Figure 8 can be created for any country in the world. The only condition is the presence of a relatively detailed database for a typical meteorological year. The method shown here is universal, and therefore the same algorithm can be applied for photovoltaic panels and solar air heaters.

M.Z. developed the method, reviewed the literature, made graphs, wrote this paper; P.R. made computer simulations, created the database, and performed calculations related to multiple regression.

This research was funded by Bialystok University of Technology, grant number WZ/WBiIS/9/2019.

This work was performed as part of the project No. WZ/WBiIS/9/2019 implemented at the Bialystok University of Technology and financed by the Ministry of Science and Higher Education of the Republic of Poland. 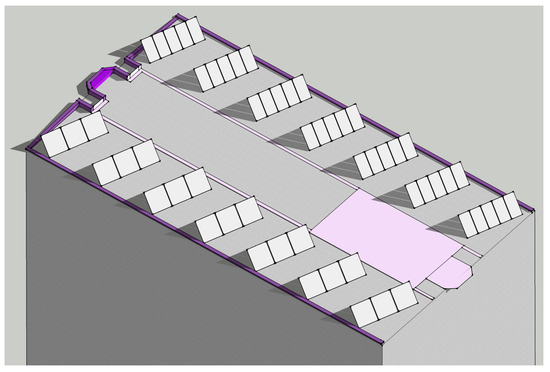 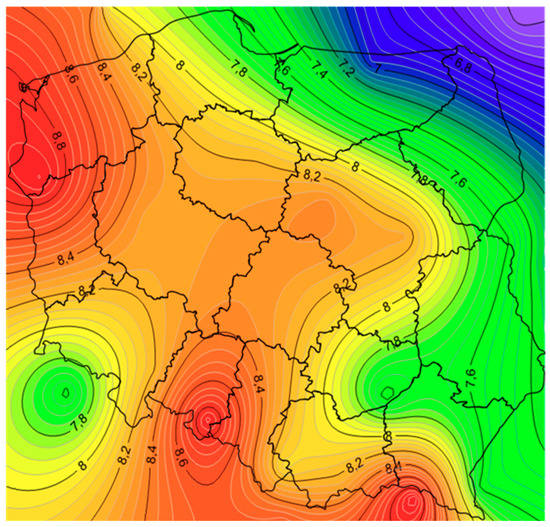 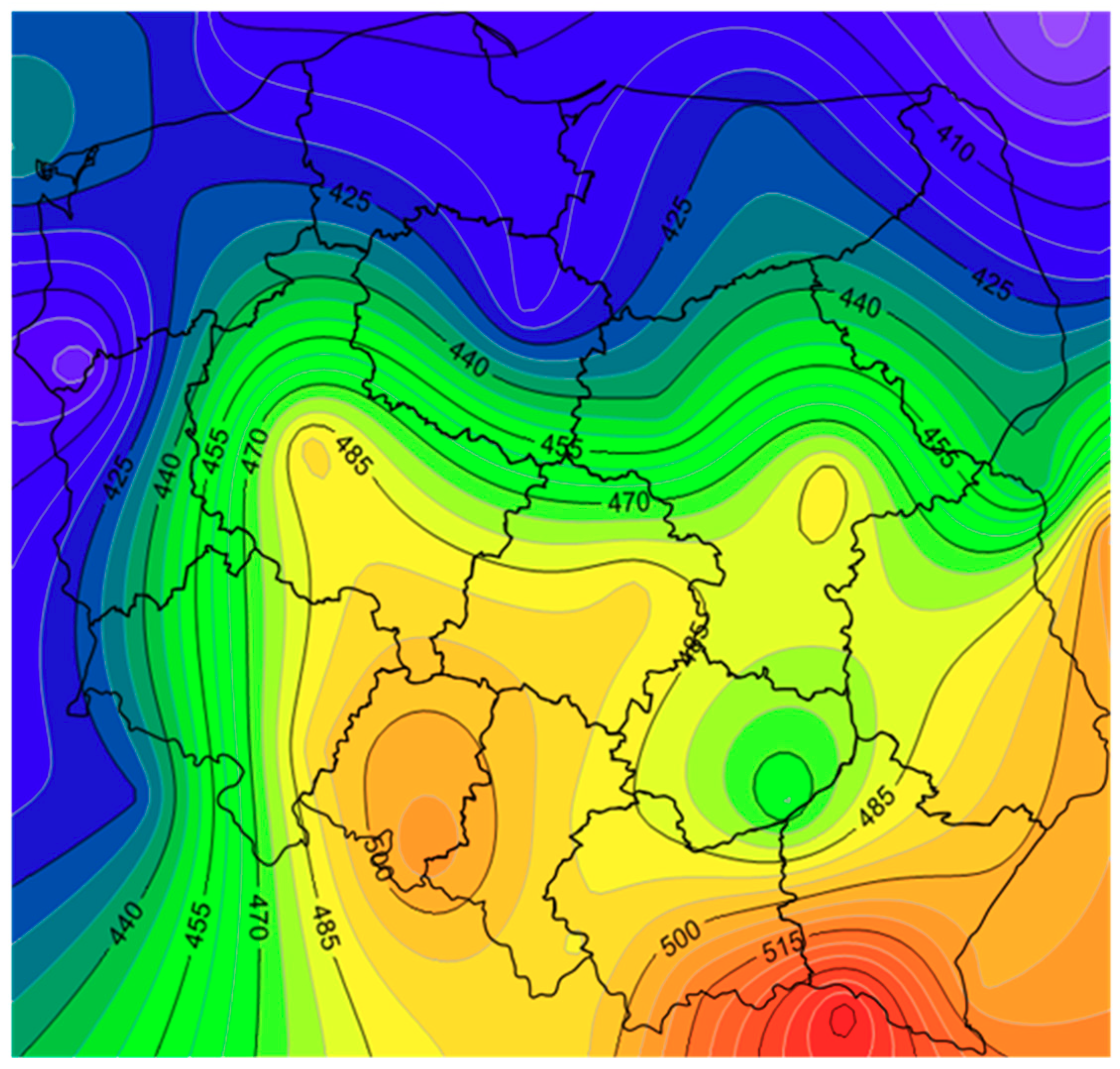