The Staebler-Wronski effect in amorphous silicon based photovoltaic devices is responsible for degradation of their power conversion efficiency, within approximately the first one thousand hours of light soaking. Several experimental studies led to highlight the performance instability phenomena for the mentioned devices, underling that recovery and improvement of such performance are observable, by subjecting such devices (both of single-junction and tandem types) to DC reverse bias stresses under illumination, or to operation in the Maximum Power Point (MPP) under variable conditions of temperature and illumination. In this work, we present and discuss the results of novel recent outdoor tests on stabilized specimens (i.e., exposed to 1000 h extended light soaking, before our tests) of tandem amorphous/microcrystalline Si (a-Si/µc-Si) photovoltaic (PV) minimodules operating in their MPP, by analyzing the causes of the performance instability effects, systematically observed on a daily scale. During the mentioned tests, we have monitored the solar cell operating temperature and the incident solar spectrum at various times in different days to verify the effect of cell temperature and solar spectrum changes on the cell performances. The experimental results show a clear correlation between performance improvements of the photovoltaic modules and their thermal history during the outdoor tests, proving the interplay between defect build-up at a lower temperature and defect annealing at a higher temperature, taking place in the solar cells operated in MPP during conventional outdoor operation. View Full-Text
Keywords: performance instability; thermal effects; tandem a-Si/µc-Si PV devices performance instability; thermal effects; tandem a-Si/µc-Si PV devices
►▼ Show Figures 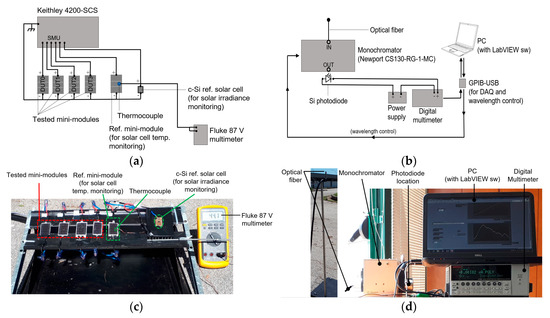