Electrifying the energy system with heat pumps and battery electric vehicles (BEV) is a strategy of Switzerland and many other countries to reduce CO2 emissions. A large electrification, however, poses several new challenges for the electricity system, particularly in combination with a simultaneous substitution of nuclear power plants (NPP) by volatile renewables such as photovoltaics (PV). In this study, these challenges in terms of additional electricity demands, deficits and surpluses as well as effective CO2 mitigation are assessed in a dynamic and data-driven approach. To this end, electricity demand and production profiles are synthesized based on measured data and specifications and assumptions of the key technologies at a high temporal resolution. The additional electricity demand of heat pumps is estimated from hourly measured heat demand profiles of a Swiss district heating provider, while for BEV different recharging patterns are combined. For electricity production, NPP are deducted from the current electricity production profile, while PV is added at an hourly resolution. In order to estimate CO2 emissions, life-cycle analysis (LCA) CO2 intensities of the different technologies are used. It is shown that with a BEV and heat pump penetration of 20% and 75%, respectively, there is an almost 25% (13.7 TWh/year) increase of the electricity demand and—just as challenging—an additional maximum power requirement of 5.9 GWh/h (hourly-averaged power). Without additional storage options, large amounts of electricity must be imported in winter and at night, while in summer at noon there is a large surplus from PV. Due to their high CO2 intensities—at least for the next decades—electricity imports and PV may—depending on the reference scenario (with or without NPP) and assumptions on other key parameters—even offset the overall CO2 savings of a highly electrified Swiss energy system. View Full-Text
Keywords: electrification; energy strategy; Switzerland; mobility; heating; nuclear phase-out; PV electrification; energy strategy; Switzerland; mobility; heating; nuclear phase-out; PV
►▼ Show Figures 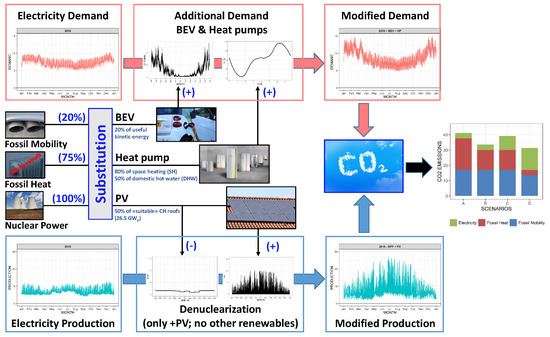