Multi-Domain Modelling of LEDs for Supporting Virtual Prototyping of Luminaires

This paper presents our approaches to chip level multi-domain LED (light emitting diode) modelling, targeting luminaire design in the Industry 4.0 era, to support virtual prototyping of LED luminaires through luminaire level multi-domain simulations. The primary goal of such virtual prototypes is to predict the light output characteristics of LED luminaires under different operating conditions. The key component in such digital twins of a luminaire is an appropriate multi-domain model for packaged LED devices that captures the electrical, thermal, and light output characteristics and their mutual dependence simultaneously and consistently. We developed two such models with this goal in mind that are presented in detail in this paper. The first model is a semi analytical, quasi black-box model that can be implemented on the basis of the built-in diode models of spice-like circuit simulators and a few added controlled sources. Our second presented model is derived from the physics of the operation of today’s power LEDs realized with multiple quantum well heterojunction structures. Both models have been implemented in the form of visual basic macros as well as circuit models suitable for usual spice circuit simulators. The primary test bench for the two circuit models was an LTspice simulation environment. Then, to support the design of different demonstrator luminaires of the Delphi4LED project, a spreadsheet application was developed, which ensured seamless integration of the two models with additional models representing the LED chips’ thermal environment in a luminaire. The usability of our proposed models is demonstrated by real design case studies during which simulated light output characteristics (such as hot lumens) were confirmed by luminaire level physical tests. View Full-Text
Keywords: light emitting diodes; power LEDs; multi-domain modelling; LED luminaire design light emitting diodes; power LEDs; multi-domain modelling; LED luminaire design
►▼ Show Figures 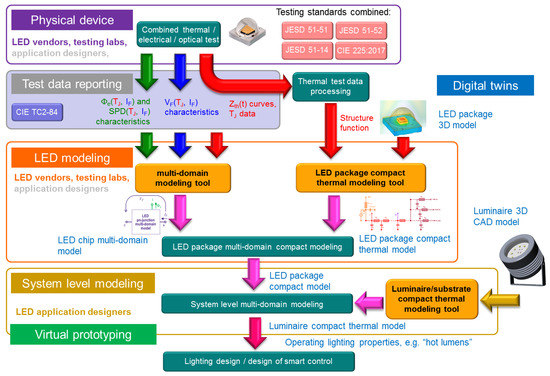