A scientific and effective coordinated control strategy is crucial to the safe and economic operation of a microgrid (MG). With the continuous improvement of the renewable energy source (RES) penetration rate in MG, the randomness and intermittency of its output lead to the increasing regulation pressure of the conventional controllable units, the increase of the operating risk of MG and the difficulty in improving the operational economy. To solve the mentioned problems and take advantage of hybrid energy storage system (HESS), this study proposes a multi-time scale coordinated control scheme of “day-ahead optimization (DAO) + intraday rolling (IDR) + quasi-real-time correction (QRTC) + real-time coordinated control (RTCC).” Considering the shortcomings of existing low prediction accuracy of distributed RES and loads, the soft constraints such as unit commitment scheduling errors and load switching scheduling errors are introduced in the intraday rolling model, allowing the correction of day-ahead unit commitment and load switching schedule. In the quasi-real-time coordinated control, an integrated criterion is introduced to decide the adjustment priority of the distributed generations. In the real-time coordinated control, the HESS adopts an improved first order low pass filtering algorithm to adaptively compensate the second-level unbalanced power. Compared with the traditional coordinated control strategy, the proposed improved model has the advantages of good robustness and fast solving speed and provides some guidance for the intelligent solution for stable and economic operation of stand-alone MG with HESS. View Full-Text
Keywords: hybrid energy storage; stand-alone microgrid; multi-time scale; coordinated control hybrid energy storage; stand-alone microgrid; multi-time scale; coordinated control
►▼ Show Figures 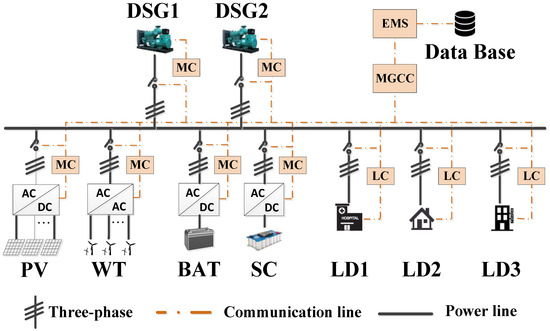