The previous work by Risso and Beluco [15] proposed the analysis based on the establishment of a network of hexagonal cells, but it suggested the determination of complementarity in a limited way, not relating the spatial complementarity with its angular distribution throughout the territory under analysis.
Figure 2 shows a network of hexagonal cells established on a hypothetical distribution of hydroelectric power plants and wind farms. The cells are differentiated between cells with hydroelectric plants (in blue), cells with wind farms (in yellow), cells with both types of plants (in gray), and cells without plants (without color).
The goal is then to determine the complementarity in time of each cell that contains some power plant with other cells that also contain power plants. There are three parameters to be determined: the complementarity in time with the other grid cells that contain power plants, their respective distances, and their respective directions.
In Figure 2, H and W indicate the months in which the minimum energy availability value occurs. These values serve as reference for the determination of complementarity in time. Equation (1) should be used and in this calculation the interval between the months in which minimum and maximum energy availability values will be considered to be equal to six months.
The first step is to choose one of the cells containing plants and determine their complementarity with the other cells that also contain plants, taking into account in each calculation the respective distance and orientation. Figure 3 shows the cell network of Figure 1 with one identifier per cell. In addition, in this figure appears a cell that is chosen as reference for the determination of the complementarity that is the cell in blue denominated H-29.
When comparing the hydroelectric plant in cell H-29 with the wind farm in the central cell, W-33, a complementarity that is equal to 0.83 is obtained. This complementarity is greater than that existing between the hydroelectric plants present in these two cells. So, because of this, the cell H-33 appears in Figure 3 painted in yellow.
Following the same reasoning, the comparison of the hydroelectric plants in the H-29 cell with the wind farms in the cell W-40 and in the cell W-46 results, respectively, in complementarities that are equal to 0.83 and 0.67. Consequently, these cells are painted in Figure 3, respectively, in yellow and green. Other cells in this figure were painted according to the complementarities determined with the H-29 cell. Complementarity is maximal only with the cell W-15, painted in red.
The next step would be to replicate this process for all cells that are containing power plants. However, it would also be necessary to represent the results on only one map. One solution to this problem of representation is the use of a complementarity rose, representing in each cell the complementarity that was identified with all other cells.
Figure 4a shows the rose for the cell H-29, showing yellow lines that are pointing to the cells W-33 and W-40 and a green line towards the cell H-46. There is also a red line in the direction of the cell W-15. These lines show their respective distances and their orientations. Figure 4b–d, respectively, present complementarity roses for the cells H-33, H-40, and H-46.
The complementarity rose shown in Figure 4b is different from the other complementary roses since it corresponds to a cell containing hydroelectric power plants and wind farms. The indication of the complementarity between the energetic resources present in this cell occurs with the application of a central circle, which is filled with the color corresponding to the complementarity. In this case, full complementarity, therefore with a circle that is painted in red.
Figure 5 shows models for determining the roses of complementarity. In Figure 5a, a model for cells containing only one energetic resource. In Figure 5b, a model for cells containing two or more energy resources. Slice directions are matched by the relative positions of the compared cells. The lengths are related to the distances between the cells. The colors are established by the legend, associating a color scale with the different values of complementarity.
Figure 6 shows the map made with the complementarity roses determined for the cells and the hypothetical distribution of power plants proposed in Figure 2. As expected, the lines in a cell always find identical lines in their counterpart. With this idea in mind, it is relatively easy to look at the cells in the hexagonal network that is shown in Figure 6 and identify which cells have maximum complementarity with each other.
The next section proposes a method for quantifying spatial complementarity in time and its expression through a map containing complementary roses in cells containing power plants.

The next section presents the application of this method to a set of hydroelectric power plants and wind farms in the State of Rio Grande do Sul, in southern Brazil.

4. Complementarity in Space for Some Hydropower Plants and Wind Farms along the State of Rio Grande do Sul, Brazil

The State of Rio Grande do Sul is the most southern state in Brazil and can be seen on Google Maps [16]. Rio Grande do Sul has a surface area of 281,730.223 square kilometers and an estimated population of 11,286,500 inhabitants. According to ANEEL [17], Rio Grande do Sul has installed capacity of 9517.817 MW, with a combination of hydroelectric power plants, thermoelectric power plants, and wind farms.
In this paper, the determination of spatial complementarity in time between some hydropower plants and some wind farms and its expression through a map with roses of complementarity is the only interest, without the intention of exhausting the subject. The objective is just to demonstrate the potentialities of the method proposed here.
In this sense, some hydroelectric plants and some wind farms were selected along the territory of the State. A network of hexagonal cells was established to group the selected plants. The generation data were obtained in order to determine the complementarity component in time, as defined by Ref. [4].
Figure 7 shows the State of Rio Grande do Sul and the network of hexagonal cells that was established for this study. The network has 582 hexagonal cells, each with 500 km2. This study selected 431 hydro power plants, marked in blue dots, and inserted in 141 cells represented in the map painted with blue. This study also selected 222 wind farms, marked in red spots, and inserted in 141 cells painted with yellow.
The region to the north of the State presents greater topographic differences and presents a drainage network more dense and mighty, and therefore receive a greater number of hydroelectric plants. The southernmost region of the State has the largest wind potential and therefore concentrates the wind farms.
The cells identified in this figure should then have their potentials as compared in order to determine complementarity in time. The index proposed by Beluco [4] is here applied to energy resources that are located in different positions. It is necessary to determine the values of complementarity and the corresponding directions.
Figure 8 shows the map of Rio Grande do Sul with the roses of complementarity indicating spatial complementarity in time. This figure shows the detailing of one of the complementary roses located in the upper left corner, which contains hydroelectric plants. The map obtained is a complex figure to be analyzed at a first glance.
Only the hydroelectric cell that had its complementarity rose shown in detail in the upper right corner, and the wind cells located in the northernmost part of the coast have red lines. These lines in red indicate existence of complementarity in time reaching maximum values. The identification of this maximum complementarity (between a hydroelectric plant in the far west and wind farms in the east) can be considered as the main result of this work.
As can be expected, the cells at the extremities of the studied region will exhibit lines of complementary roses, which could be termed as petals, with longer lengths. Likewise, the cells in the most central parts will present a large number of lines with intermediate lengths. In addition, it can also be expected that the roses will present great variations of intensities of complementarity, as the resources analyzed are more intermittent.
Figure 9 shows a detail of the central part of the map shown in Figure 8. This map at a larger scale allows for a better observation of the roses of complementarity. The complementary roses of the cells of the north coast present more petals with maximum complementarities that are oriented to the hydroelectric plants of the central north region, besides those already identified in Figure 8.
The cell that appears in detail in the upper left corner is one of these cells. Petals with approximately maximum complementarity at distances of the order of 350 km are complemented with these cells of the north coast. Intermediate complementarities with wind farms to the south and southwest complete the petals of this rose of complementarity.
The wind farms to the southwest of this position, in turn, present intermediate complementarities also with the more distant power plants, which are located in the region of the cell detailed in the map of Figure 8.
These complementarity maps can be used to optimize the operating rules of the plants considered in this study, for example, by better utilizing water reservoirs and backup systems. These complementarity maps can also be used to optimize the adjustment between the available energy for the various generating plants and the demand profile of different types of consumers.
Maps of energetic complementarity can also be elaborated from data, indicating energetic potential, allowing for elaborating strategies to choose the best new generating plants that are to be inserted in the energy system. Maps based on energetic potentials may also indicate the best combination of power plants based on renewable energies, when considering their insertion in the energy system.
The applications of complementarity maps, both for the elaboration of operating strategies and for the expansion planning, can be very important for a better insertion of power plants based on renewable resources in existing energy systems and for the optimization of operating rules with a better use of renewable resources.

This work was developed as a part of research activities on renewable energy developed at the Instituto de Pesquisas Hidráulicas (IPH), Universidade Federal do Rio Grande do Sul (UFRGS), southern Brazil. The authors acknowledge the support received by the institution. The second author acknowledges the financial support received from CNPq. 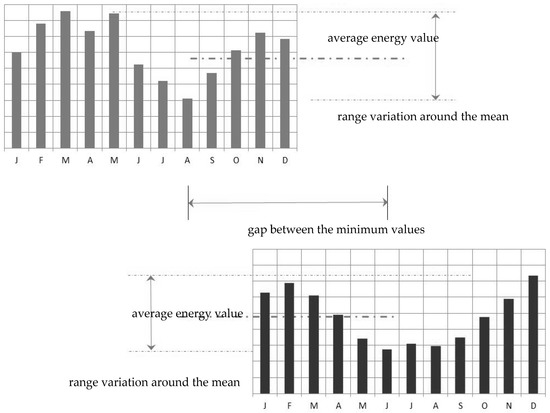 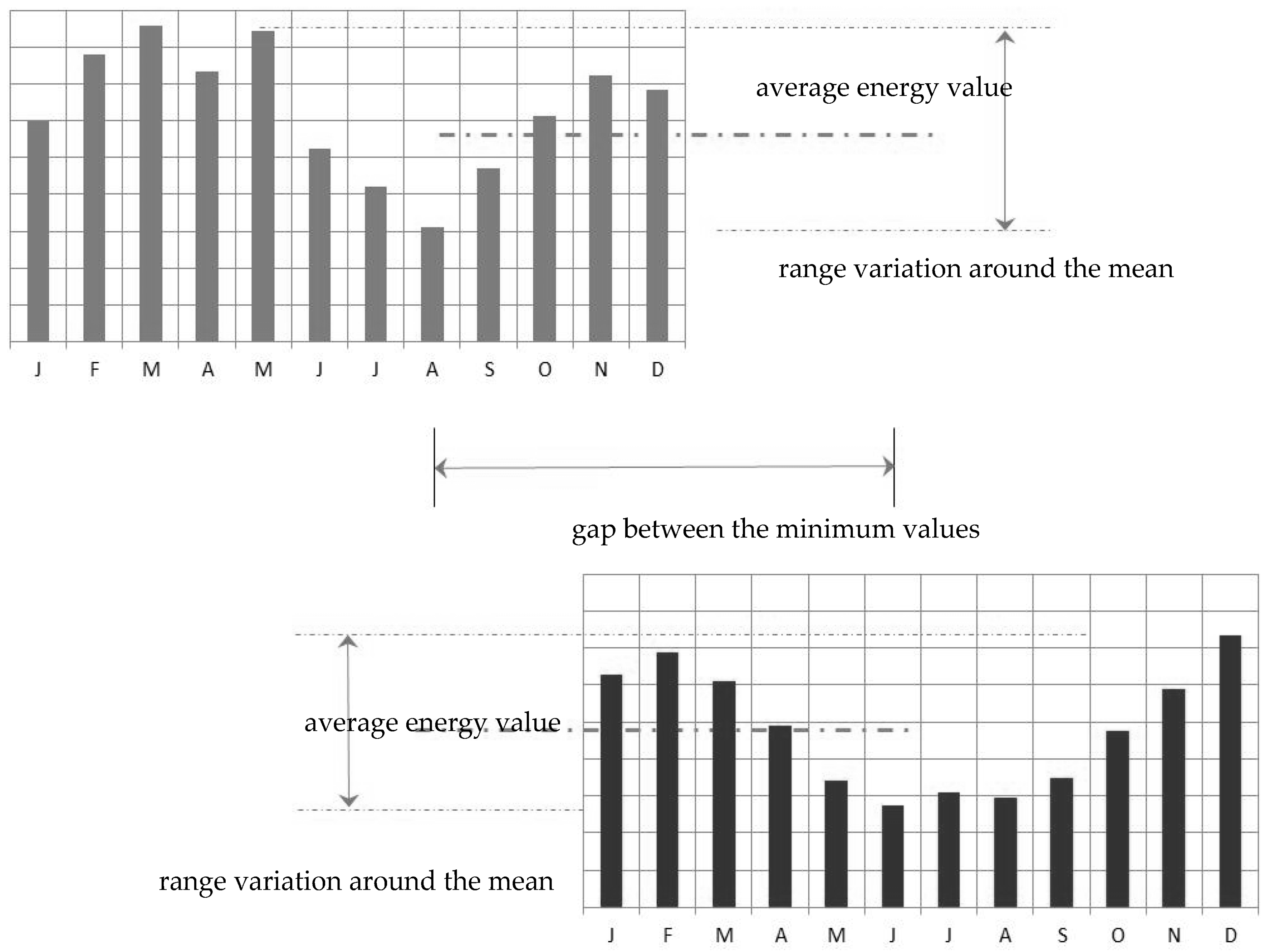 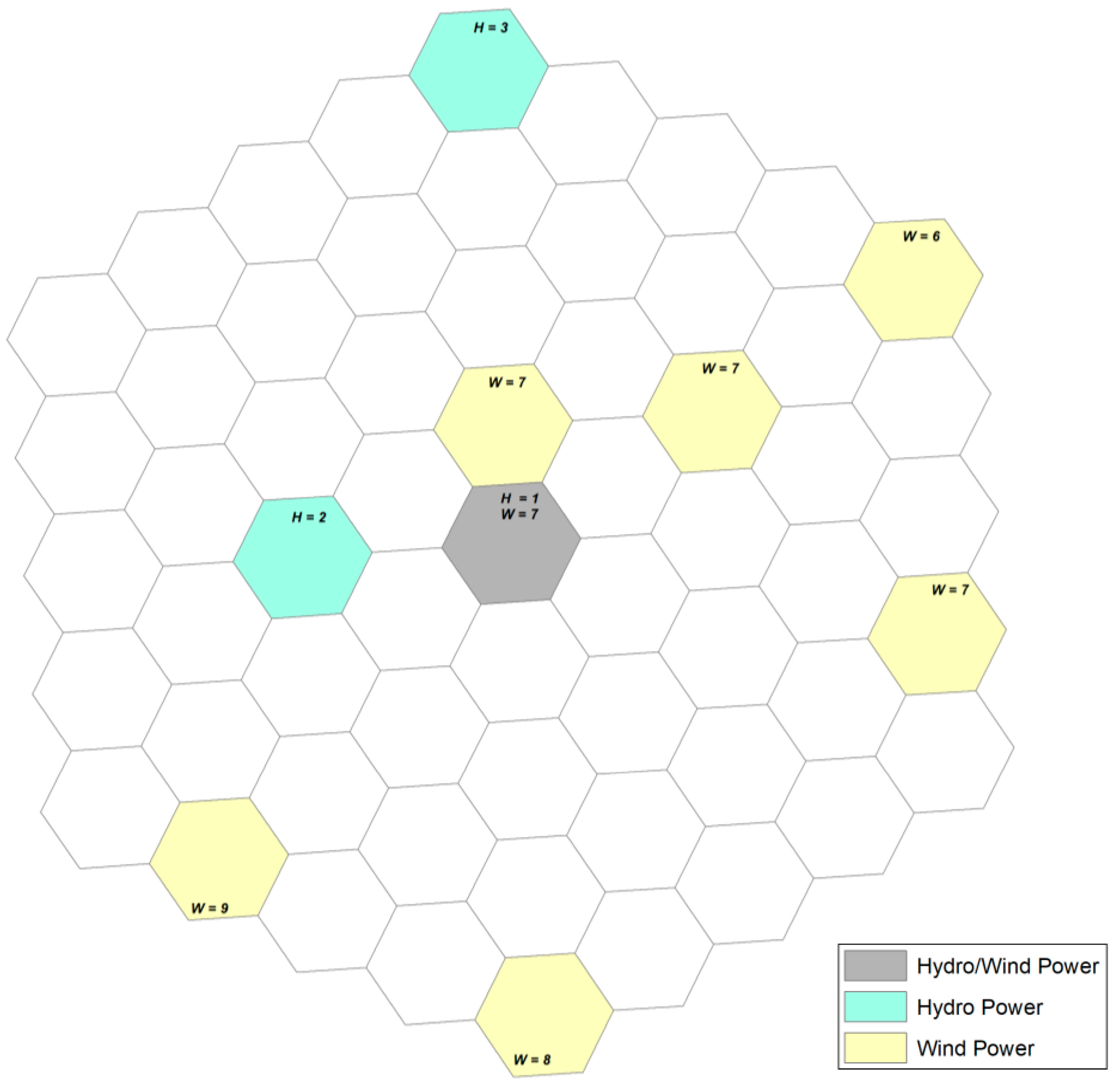 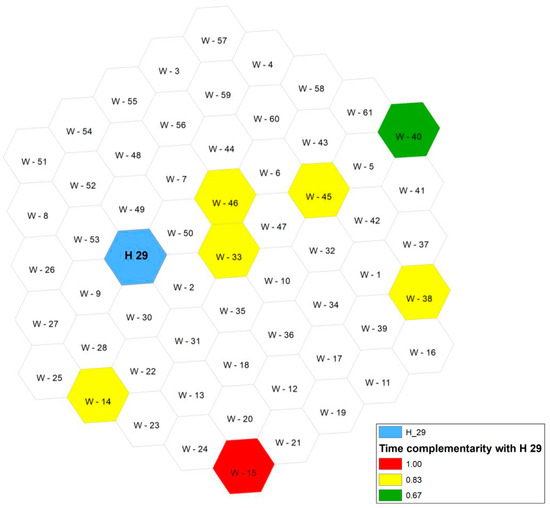 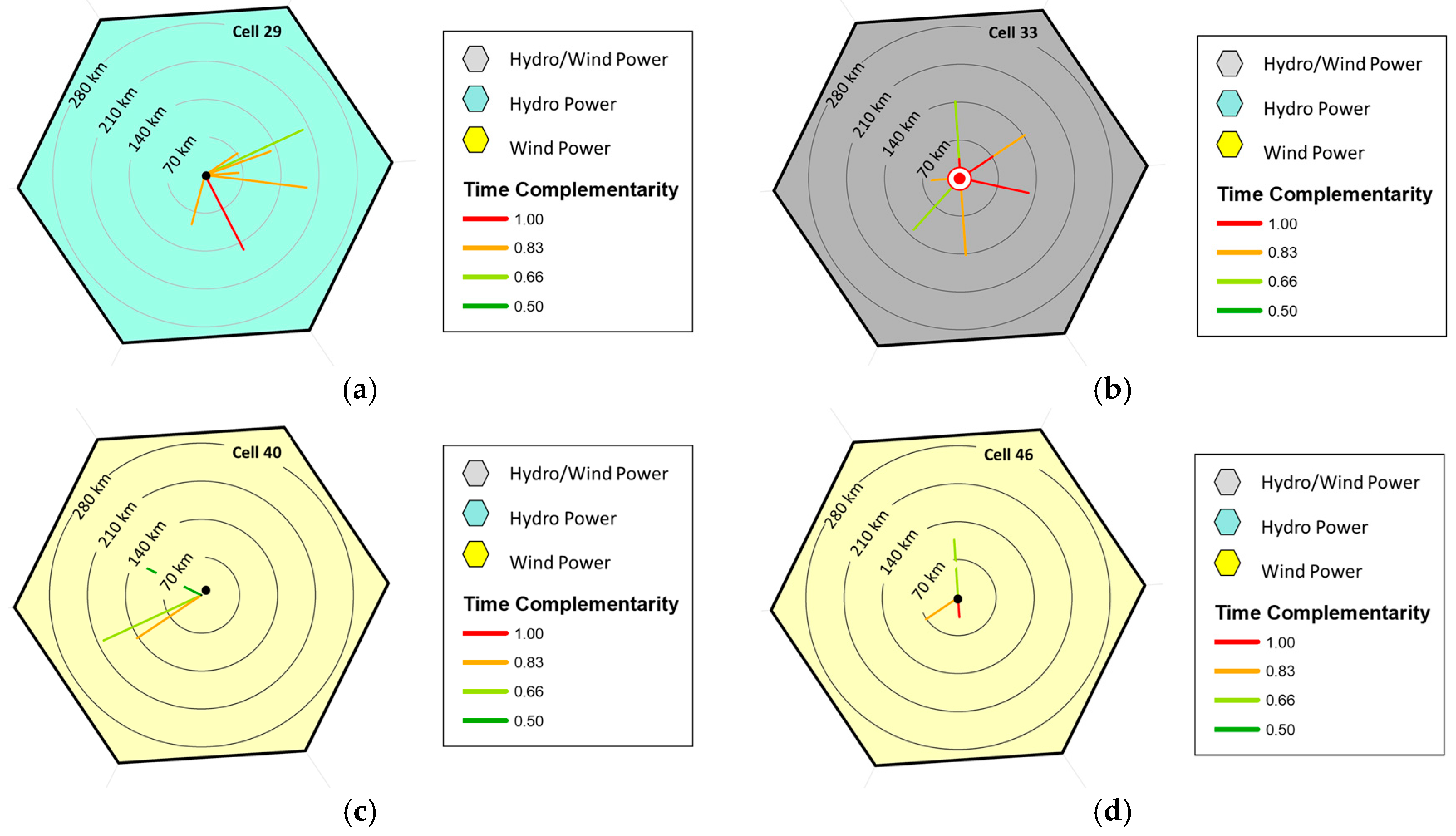 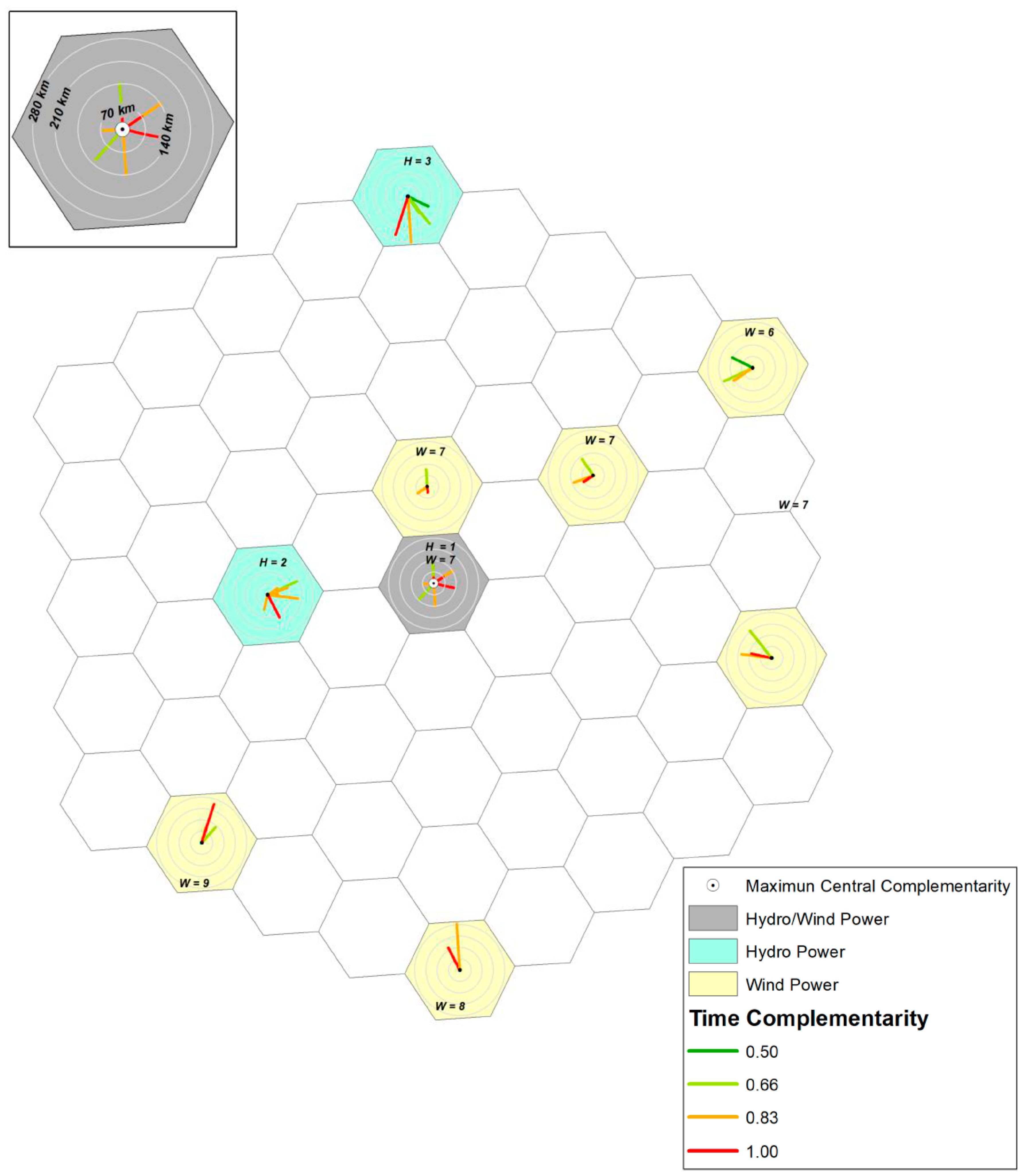 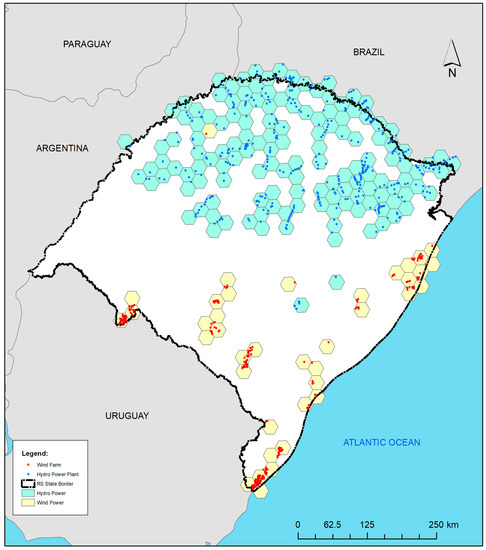 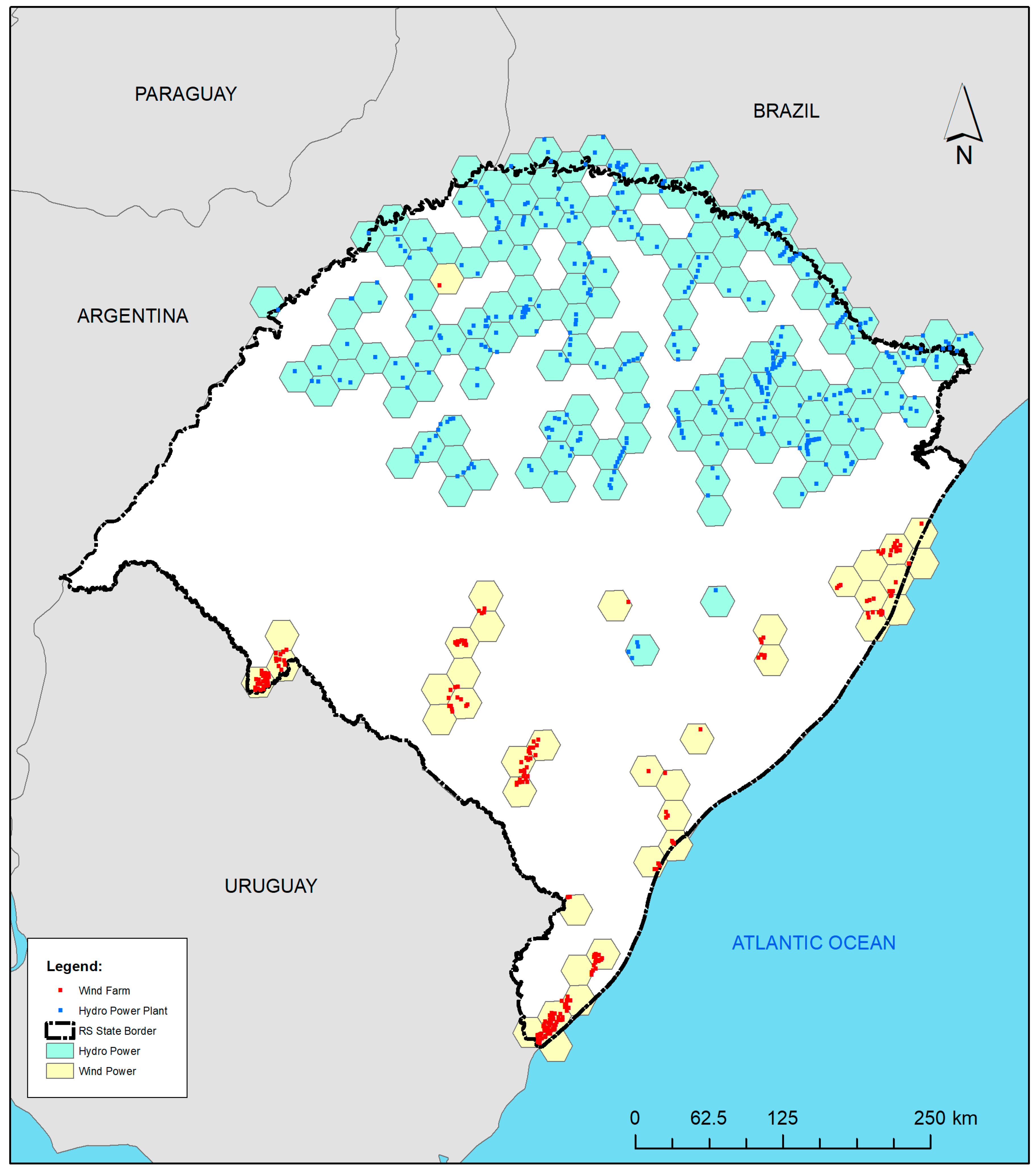 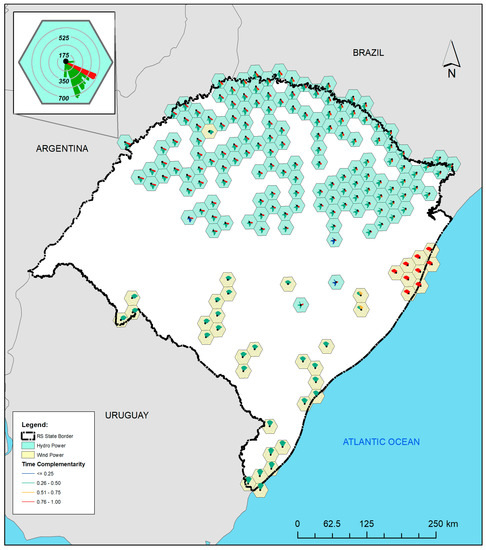