Urban Environment and Solar PV Performance: The Case of the Netherlands

This section presents the single- and two-stage PV farms models used throughout this work.

A single-stage PV farm is a topology where only one DC/AC converter is used to interface the PV panel array to the electric grid [31,32,33]. The DC/AC converter is typically a VSC. Single-stage PV farms are usually more efficient than two-stage ones, but the PV panels’ output voltage is not fully decoupled from the grid voltage.
In this work, we adopt the single-stage PV farm shown in Figure 1, which is based on [33]. The DC/AC converter is a two-level, three-phase VSC. The DC/AC converter is connected to the grid through an RL reactor, an RLC series filter to smooth current harmonics and a step-up - transformer to insulate the PV farm from zero sequence current faults that might occur on the grid side. The system dimensioning and DC/AC controller tuning were presented in [28]. The AC/DC converter controls the PV voltage via a perturb and observe MPPT algorithm [34], as well as the reactive power injected to the grid. The single-stage PV farm parameters are summarized in Table 1. The power-voltage characteristics of the PV panel are shown in Figure 2.
In Figure 1, indicates the PV panel voltage whose reference value is generated by the maximum power point tracker (MPPT) algorithm; C is the capacitor of the DC circuit; is the converter AC current; and are the resistance and the inductance of the tie reactor; , and are the resistance, the inductance and the capacitance of the filter. Both active and reactive power are considered positive when flowing from the PV system to the grid.

The flowcharts presented in Figure 5 and Figure 6 summarize the proposed methodology for evaluating the losses and the reactive power capability for single-stage and two-stage PV farms, respectively. In the following paragraphs, these flowcharts are detailed.
For the single-stage PV farm, the goal is to cover the whole range of operating points (G, ) where G is the solar irradiance and is the required reactive power support. To initiate the flowchart of Figure 5, the irradiance is set to zero, while is set to . Then, a simulation for the operating point (G, ) is performed. The next step consists of checking the controls: if the controller references are properly tracked, then the operating point is within the reactive power support capability area, and the power losses are evaluated. Otherwise, if the system controller references are not properly tracked, one of the converter capability limits is violated, and the operating point is outside of the capability area. After the losses evaluation, is increased by until is reached. To restart the evaluation for a new set of operating points, the irradiance G is increased by , and the procedure is repeated until the maximum local irradiance is reached. It is assumed in the simulations that the PV panel temperature is constant at 25 C.
For the two-stage PV farm, the procedure is similar to the previous one, but because of the extra degree of freedom offered by the use of the DC/DC converter, the flowchart presents an extra loop shown in red in Figure 6. Indeed, the DC voltage applied to the DC/AC converter is not tied to the maximum power point (MPP) voltage, meaning that it can be set arbitrarily by the PV farm operator to reduce the DC/AC converter losses [36], for example. Therefore, the goal here is to cover the whole range of operating points (G, , ). Initially, the DC/DC converter output voltage is set to , then the procedure is similar to the one of the single-stage PV farm. To move on to the next operating point, is increased by , and the procedure is repeated until is reached. The minimum DC circuit voltage is defined as [37]: where x is taken as 1.15 [38] and is the RMS line-to-line voltage at the connection of the VSC output. The maximum DC voltage is taken close to the PV panel open circuit voltage for the maximum local irradiance at −10 C [39].

For a given operating point, the PV system losses are calculated as:
and are the Joule losses of the air-cored reactor and of the air-cored filter: where is the reactor current and is the filter current. and are the reactor resistance and filter resistance, respectively.
is the transformer losses, which can be divided into iron losses and copper losses : with: where and are the high and low voltage winding currents and is the line-to-neutral voltage applied to the transformer high voltage windings. , and are the high and low voltage windings’ resistances and the iron losses’ resistance [40], respectively.
For the DC/DC converter, can be written as: where is the DC/DC converter air-cored inductor Joule loss, is the IGBT loss and is the diode loss. is calculated as: where is the air-cored inductor resistance and is the DC bus current.
The losses of the semiconductor devices , and the losses of the DC/AC converter do not have a closed formulation. The numerical evaluation of the converter losses for a wide range of operating points using a detailed switch model proved to be unfeasible due to the requirements of simulation steps in the order of nanoseconds. Therefore, alternative models were investigated [36,41,42,43,44,45]. The evaluation of these losses was carried out using the look-up table approach proposed by [45] with the same approximation as [28,29,30]: the junction temperature was assumed constant at 125 C, so that only manufacturer data are considered instead of experimental data. The look-up table approach consists of comparing the switch currents’ values pre and post the switching transitory. This comparison determines whether the switch was turned on or turned off, and the losses of the respective transitory are obtained through the look-up table. Furthermore, if the switch current is greater than zero, than the respective conduction losses are calculated.

This section presents the results for losses without reactive power support (needed to derive the technical costs) and shows how the addition of the second stage impacts the losses.

For the single-stage PV farm, the DC voltage is tied to the irradiance following the MPP as shown in Figure 2 and Figure 7. As a result, the losses are only a function of the solar irradiance. For nighttime operation, when the irradiance is 0 W/m, the DC voltage must be set to given by Equation (1). For both test systems, this value is 720 V. Figure 8 details the losses per component, while Figure 10 summarizes the losses as a percentage of the rated power . It can be seen that converter losses are predominant and exhibit an approximately linear behavior with respect to the solar irradiance.

For the two-stage PV farm, the DC voltage can be chosen by the PV farm operator. Three different output DC/DC converter voltages are considered here: 720 V is the minimum voltage for the correct operation of the DC/AC converter; 750 V is the minimum voltage for which the DC/AC converter is able to generate 1.0 p.u. of reactive power support; and 800 V is the voltage at the maximum power point for the standard test conditions (25 C and 1000 W/m) for the single-stage PV farm. Figure 9 details the losses per component.
Figure 10 summarizes the losses as a percentage of the rated power. We observe the same trends as for the single-stage case. The use of the second stage leads to extra losses, but they can be minimized by operating at the lowest DC/DC converter output voltage possible (given by (1)). In the next section, the usefulness of using the second stage will be clarified.

This work was supported by São Paulo Research Foundation (FAPESP) grant # 2014/05261-0, by the Brazilian National Research Council (CNPq) grant # 2017-1/06628,and by the Coordination for the Improvement of Higher Education Personnel (CAPES).

The authors would like to thank the Brazilian National Research Council (CNPq) and the Coordination for the Improvement of Higher Education Personnel (CAPES) for their financial support. 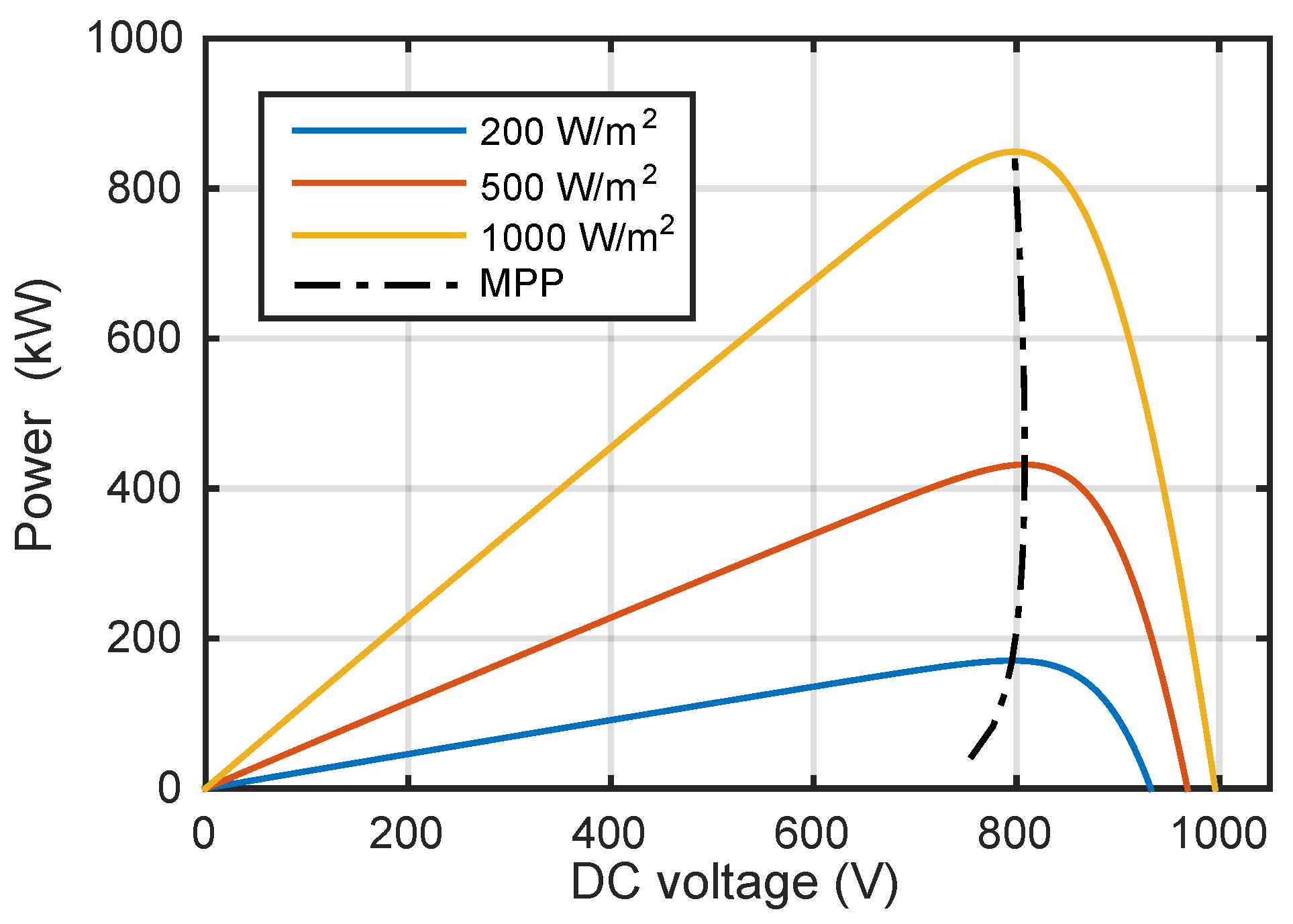 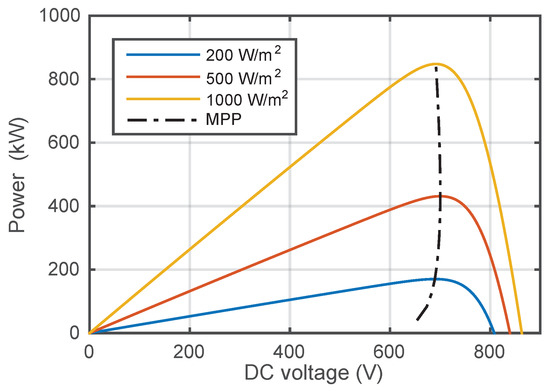 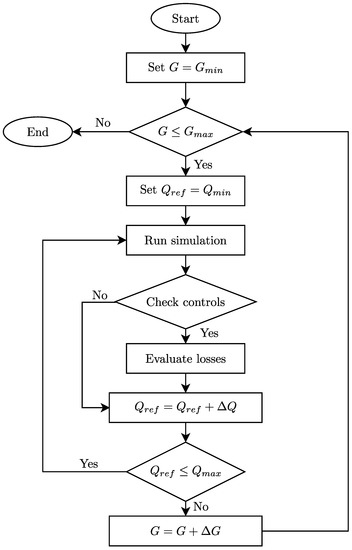 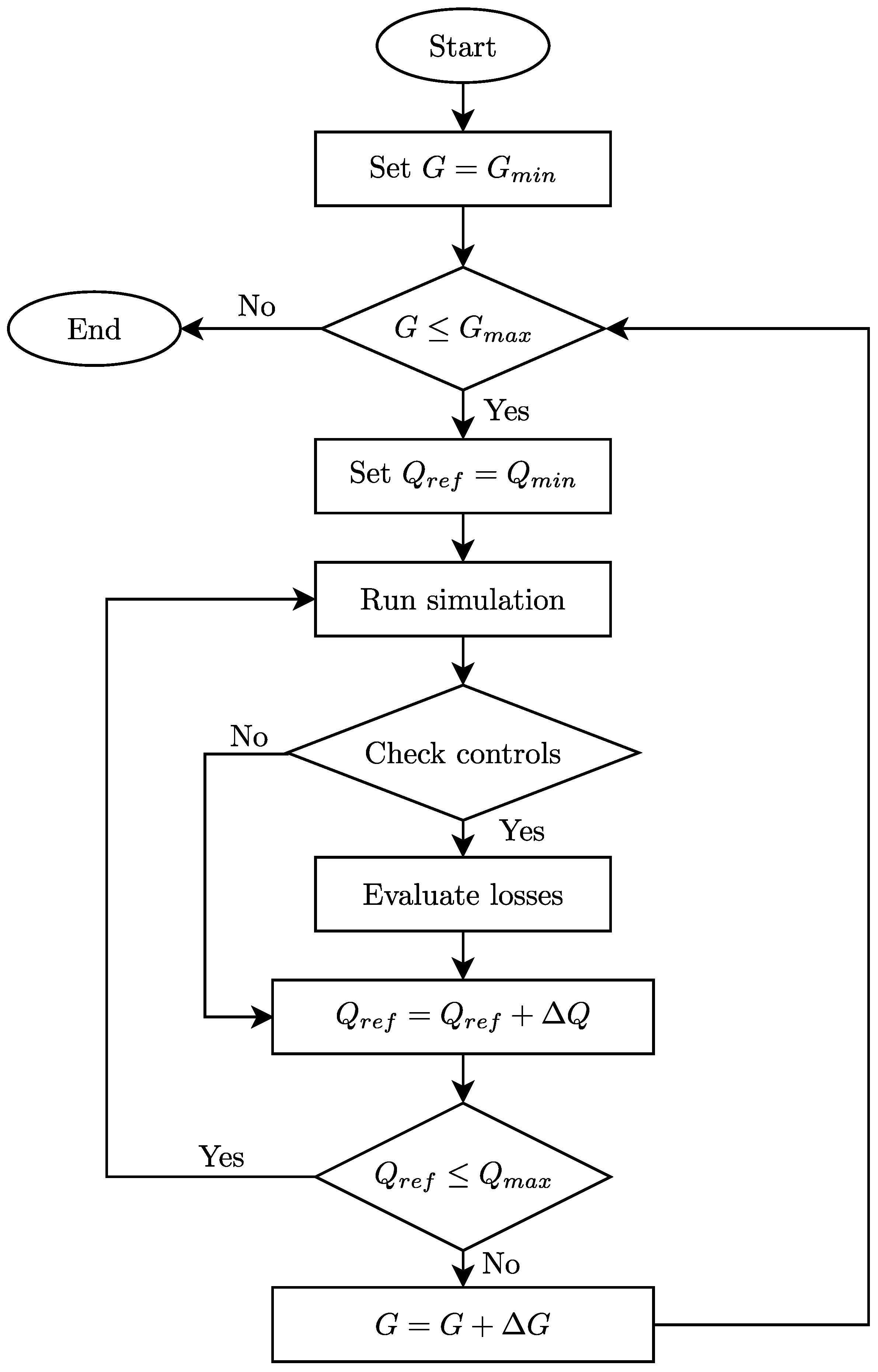 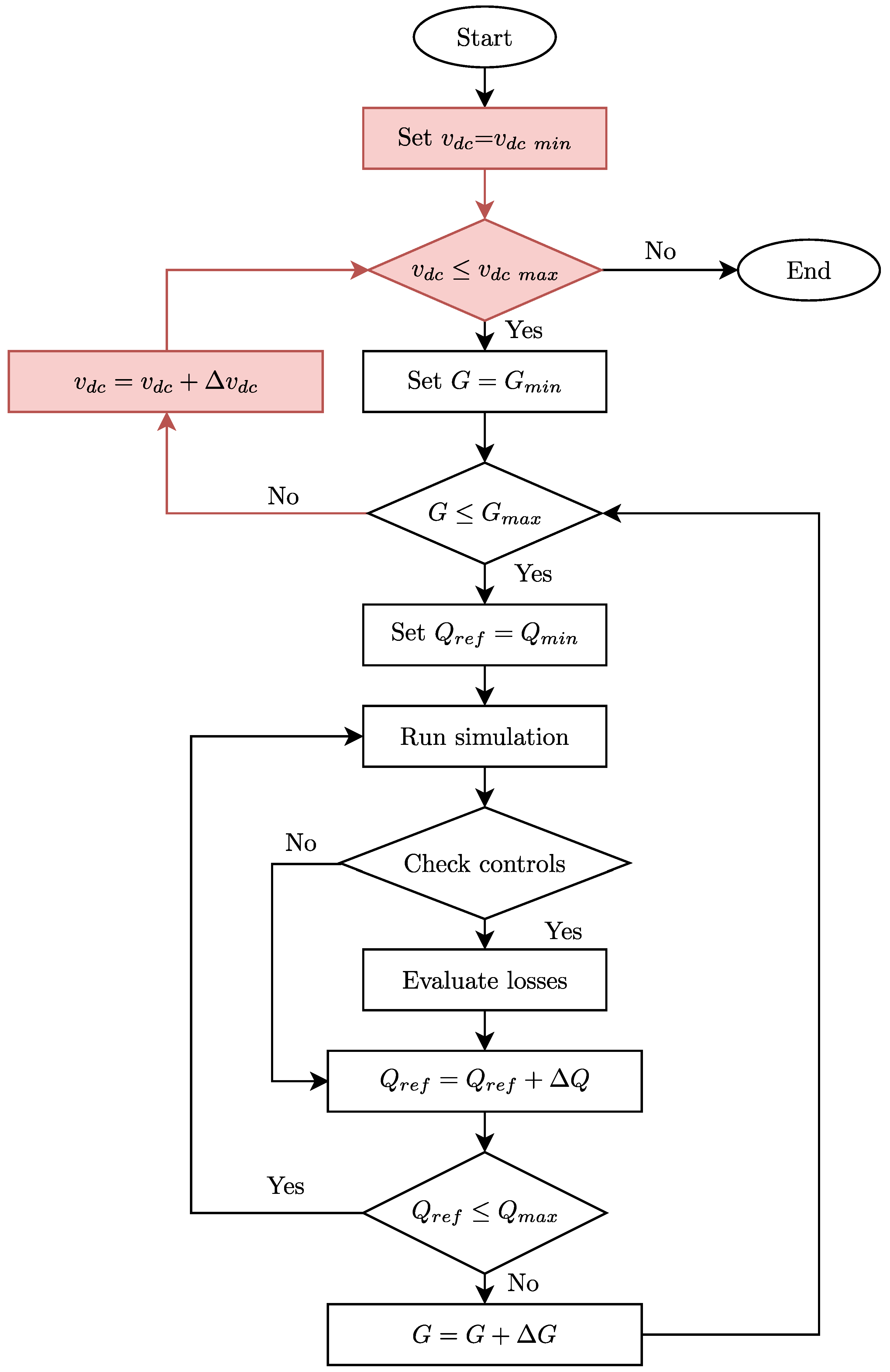 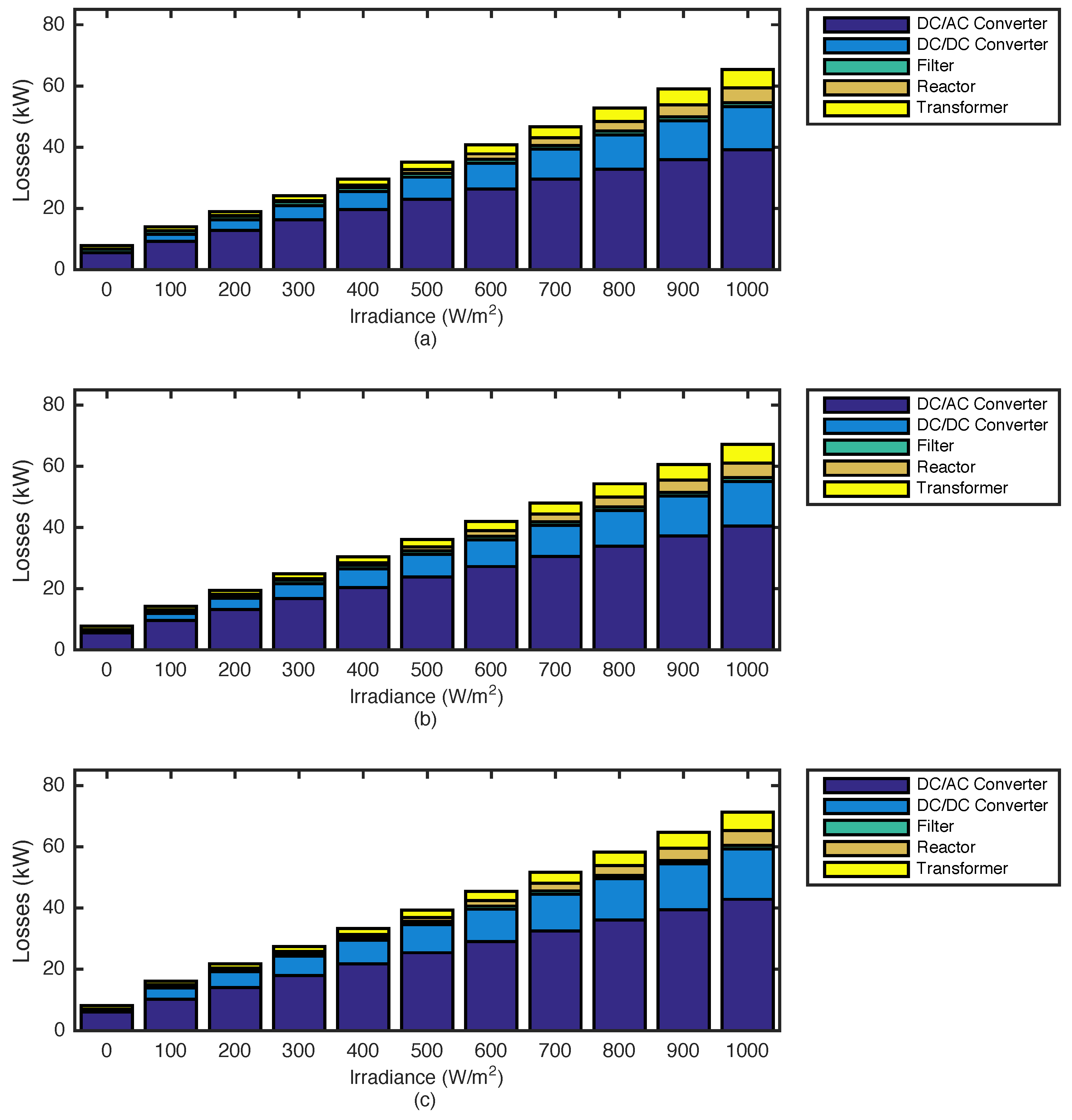 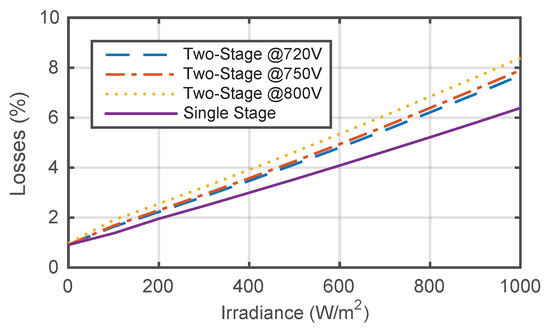 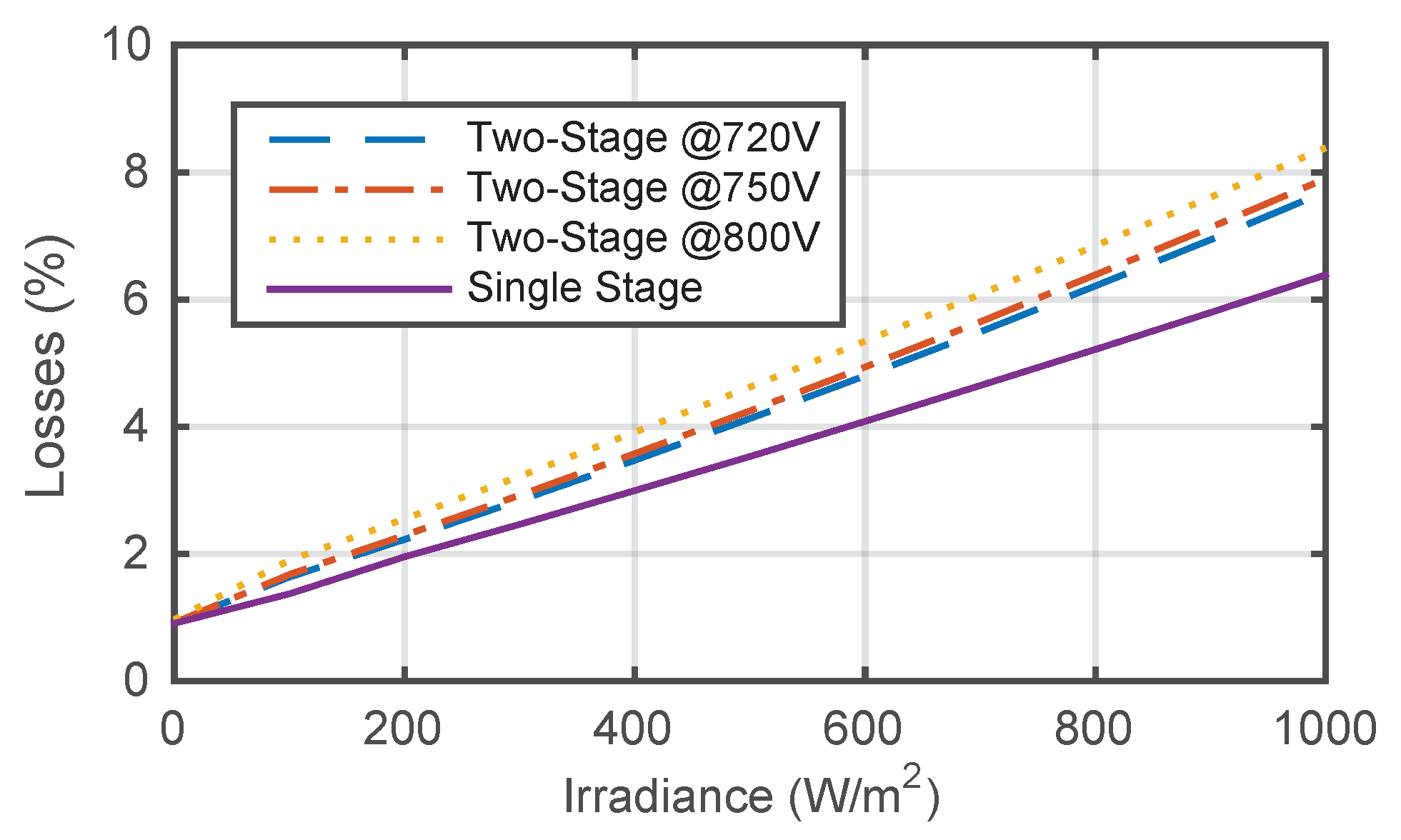 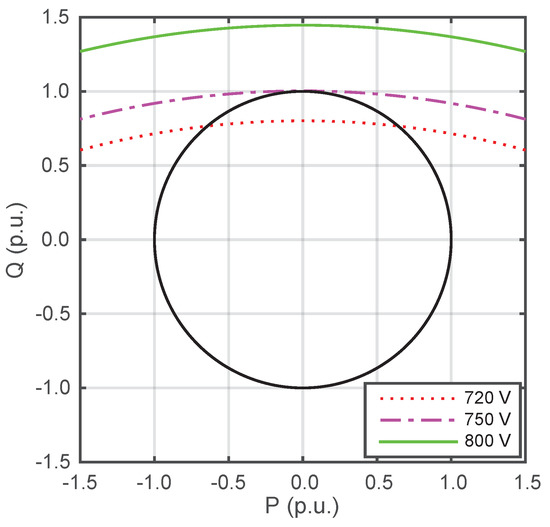 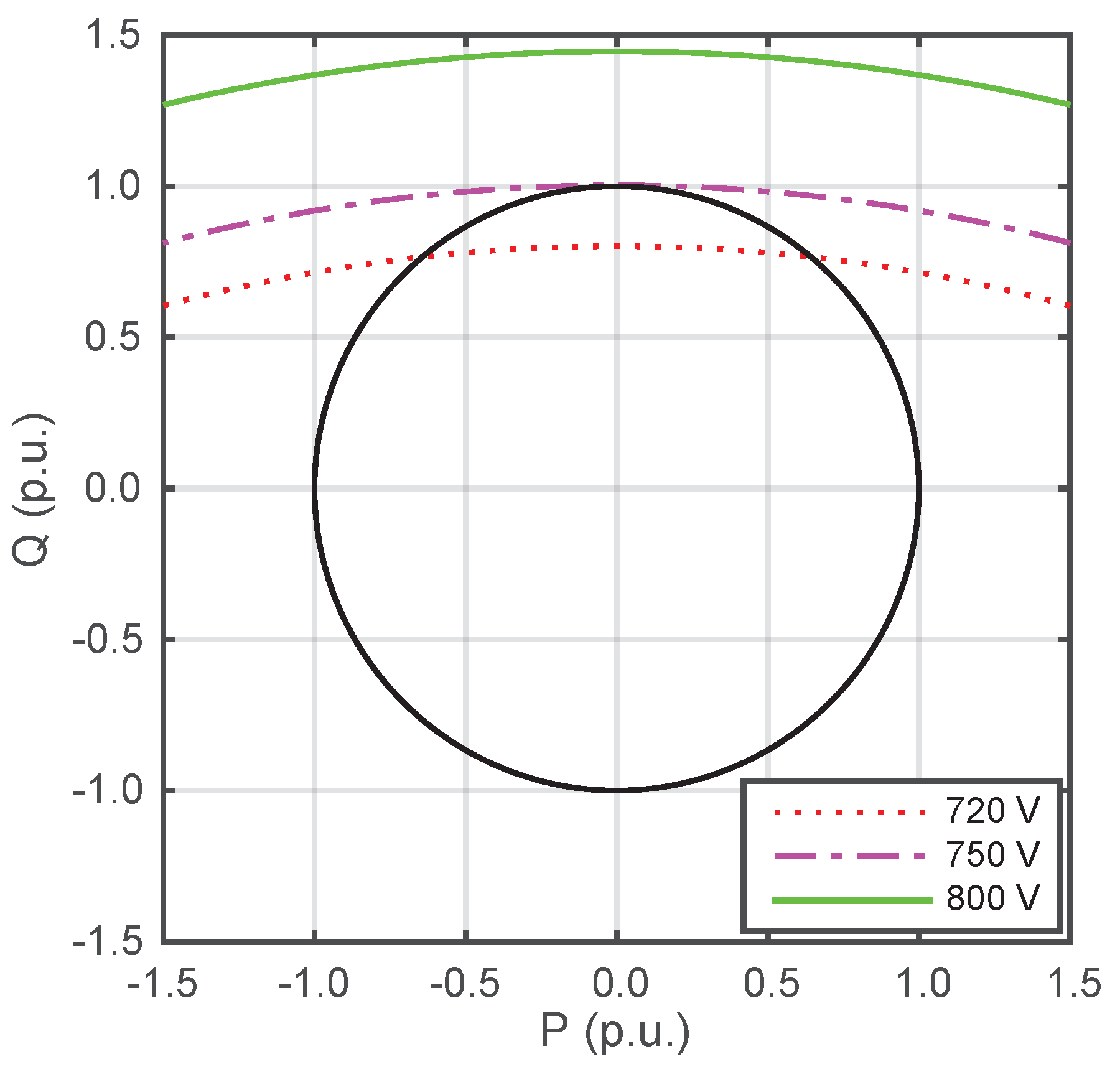 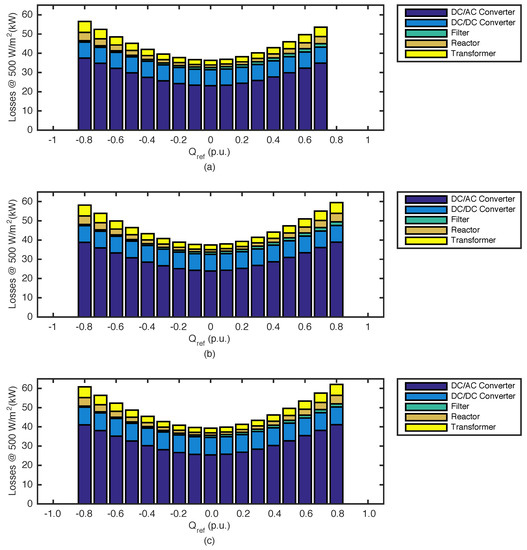 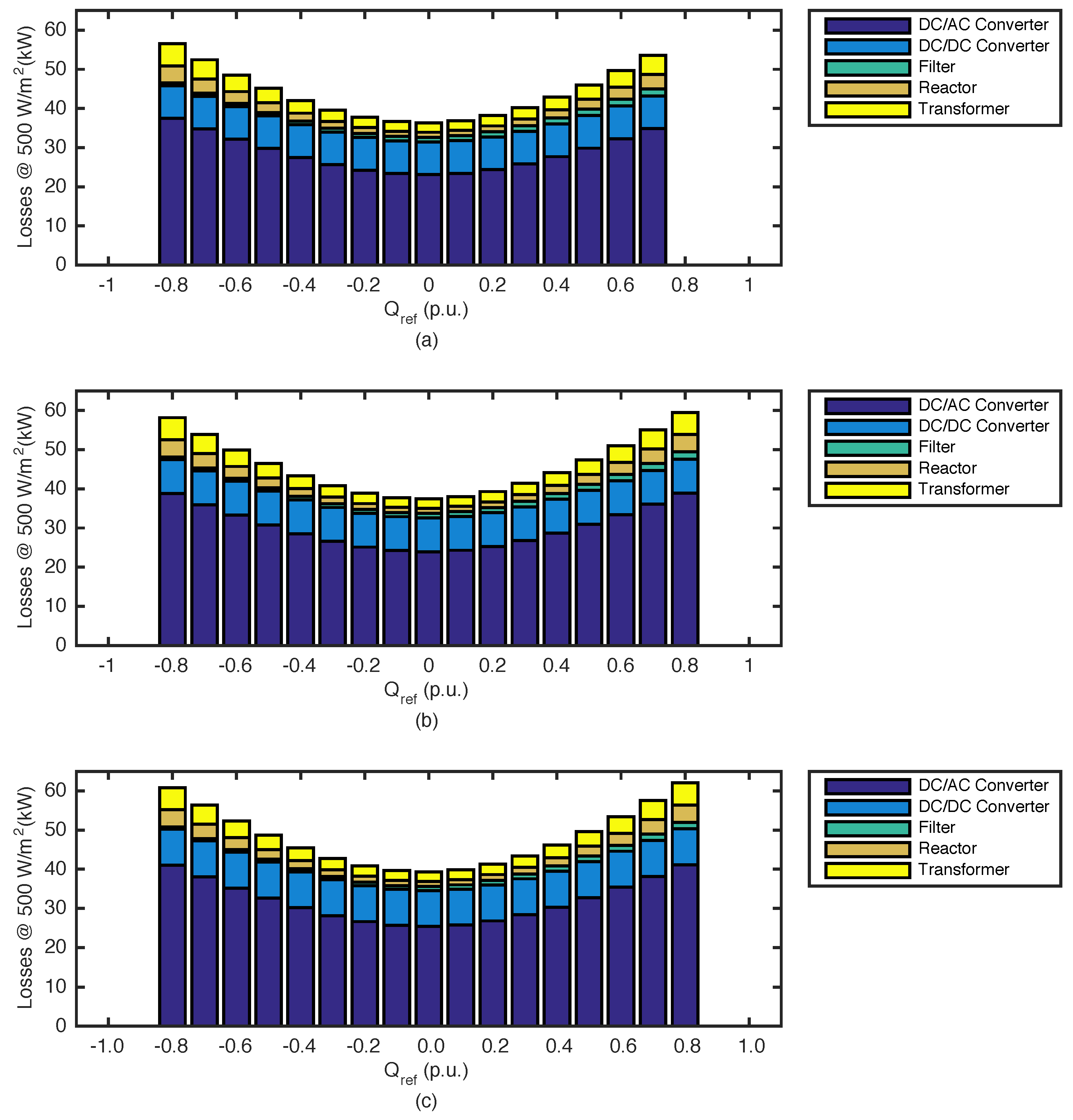 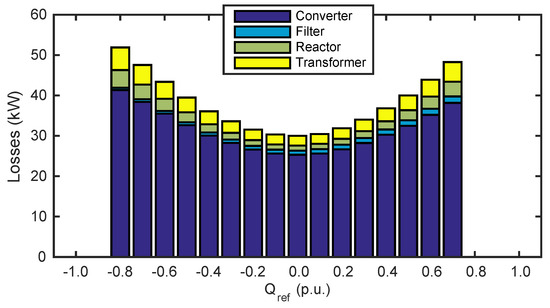 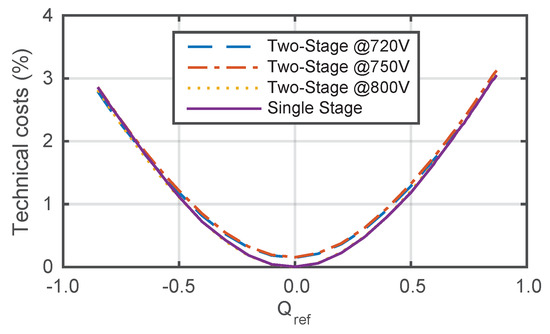 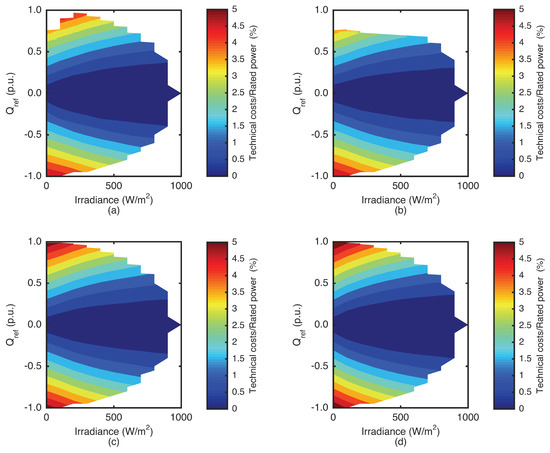 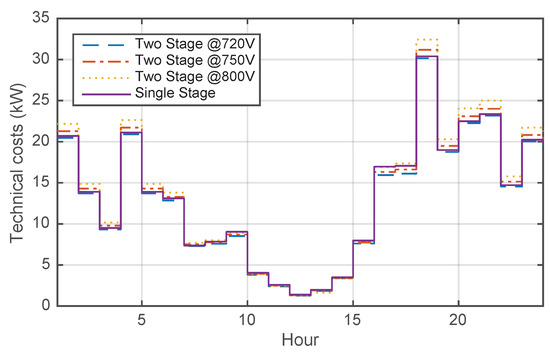 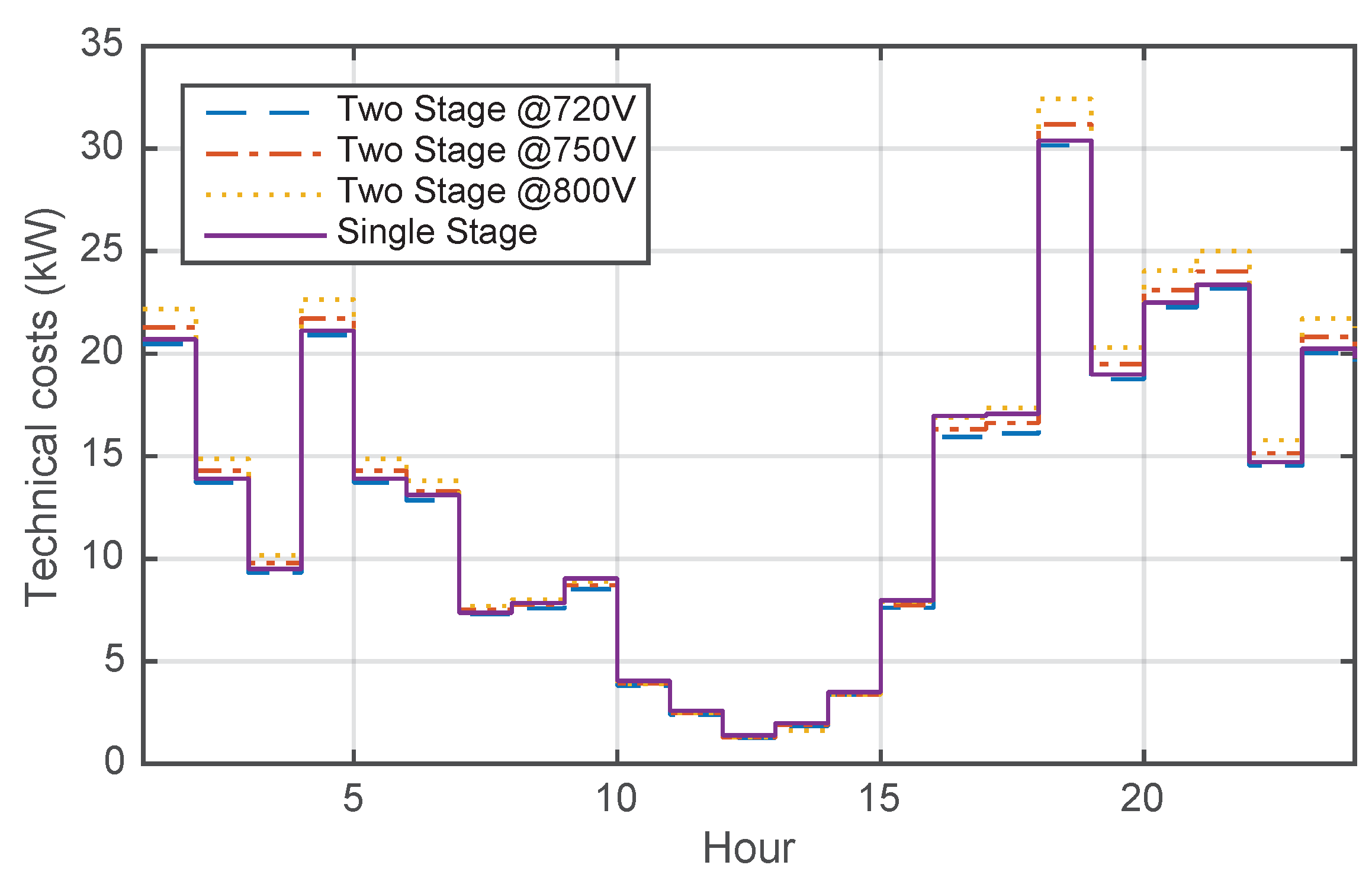