The global building sector accounts for more than one-fifth of total worldwide energy consumption and is expected to increase by 38% from 2010 to 2040 [1]. Buildings in the United States consume 41% of primary energy in the country and 7% of total primary energy worldwide [2,3]. The challenge is that three-fourths of the world’s energy infrastructure heavily depends on fossil fuels. The challenge with fossil fuels as a source of energy is that they are considered a major producer of greenhouse gases and humans deplete them faster than they are generated. Although the worldwide fuel sources used to generate electricity have changed over the last decades, coal and natural gas accounted for more than 60% of the overall worldwide electricity production in 2010 [4].
Solar energy is a promising energy source that has received greater public attention in the last decade. The total worldwide installed photovoltaic (PV) capacity was about 1 GW in 2000 and it surpassed 138 GW of installed power in 2013 [1]. In 2014, around 40 GW of PV power was added to reach a global total capacity of 177 GW [5]. The total PV capacity exceeded 300 GW in 2016 with an addition of over 74 GW to the global capacity, which grew faster than any other fuel source [6,7]. The total global PV capacity is expected to reach 740 GW by 2022 [6].
Building roofs in general are ideal spaces for solar technology because they are usually larger in size, contiguous, and have minimal shade. Also, when electricity is generated on the roof and consumed in the building, the average losses of 7% from transmission and distribution lines can be avoided [8]. According to the National Renewable Energy Laboratory (NREL), rooftop mounted systems accounted for 74% of the installed PV generation capacity in the United States in 2008 [9]. According to the U.S. Energy Information Administration (EIA), the electricity generation from solar power in the building sector was around 5000 GWh in 2010 and reached around 15,000 GWh in 2015 and is expected to reach 100,000 GWh in 2040 [10].
The growth in the PV market is due to several factors; such as government incentives, environmental concerns, and increase in PV efficiency and decrease in cost [11,12,13]. The conversion efficiency of crystalline silicon, which represents over 85% of the market share, is 20% to 27%. The conversion efficiency of a PV module is tested in laboratories under a controlled environment using a specific procedure called Standard Test Conditions (STC). Standard Test Conditions create uniform test conditions which make it possible to conduct uniform comparisons of photovoltaic modules by different manufacturers. Ratings under the STC involve a constant temperature of 25 °C, a constant solar irradiance of 1000 W/m2, and a constant sunlight spectrum of AM (air mass) 1.5 G (global). However, the conversion efficiency of field installed PV modules is lower than that measured under the STC due to several factors, such as: electrical circuit resistance, dirt and dust accumulation, shade, a range of operating temperatures, solar irradiances, and sunlight spectra. The operation temperature of PV modules has an impact on the conversion efficiency. Therefore, PV manufacturers publish temperature coefficients relating losses in efficiency for each degree the temperature fluctuates from the base of 25 °C.
There are several roofing types that have a range of thermal performance. Conventional roofing materials during summer months can reach temperatures of 80 °C while a green roof, also known as vegetated roof, stays below 50 °C [14]. Green roof temperatures depend on the roof’s composition, moisture content, geographic location, and solar exposure [15]. Most green roof surfaces stay cooler than conventional rooftops under summertime conditions because of plant shading and evapotranspiration. Conventional roofing materials have higher surface temperatures during summertime because the material’s solar reflectance ranges between 5% and 25%, which means 75–95% of the Sun’s energy is absorbed [16]. An experimental study conducted in Chicago, IL during the summer compared the roof surface and ambient air temperatures of a green roof to a conventional roof and it found that the ambient air temperature over the conventional roof measured about 45.5 °C while the green roof was 41.6 °C. The green roof surface temperature ranged from 32.7 °C to 48.3 °C while the black roof was 76 °C [17].
PV panels installed over building roofs have a thermal interaction with the roof surface. This study investigated the thermal interactions between PV panels and roof surface for PV panels installed over a green roof and PV panels installed over a conventional roof. The PV panels over both roof types were the same type, with the same height, tilt, racking system, and inverter. The main goal is to quantify the differences in PV operation temperatures and energy out-put as an impact of different roofing materials. A few studies have examined the impact of roofing choice on the performance of PV panels. Several of these studies, such as the studies of [18,19,20] compared the performance of PV panels over green roofs with PV panels over black roofs while the studies of [21,22] compared the performance of PV panels over green roofs with PV panels over gravel roofs. These works report that PV panels installed over a green roof have output increase ranging from 0.5% to 4.8% in reference to PV panels over conventional roofing materials; however, none of these works had compared full scale identical installation over a long period of time. Both studies of [18,20] conducted a long term study with full scale installations but in ref. [18] study the PV panels were not identical in terms of number and type and in ref. [20] study the distances from the roof surface to the PV panels were not identical. The experiment measurements for ref. [22] study were conducted for a couple of months and for [19] the study was conducted only for several hours. Also, the PV panel installations in [21,22] studies were at laboratory scale. This study improves on previous literature by quantifying the relationship between roof surface temperatures and PV electrical output by comparing the performance of PV-Green and PV-Black through a 12-month experiment with the same PV panel type, tilt, inverter, racking system, and heights. Investigating the performance of PV-Green and PV-Black through an experimental study will help to fill the lack of quantitative data that identifies the impact of roofing materials on the performance of PV panels.

A field experimental study was conducted to investigate the thermal interaction between building roofing materials and PV panels. This research examined the performance of PV panels over a green roof (PV-Green) to the performance of PV panels over a black roof (PV-Black). The roof of the Center for Design Research (CDR) at the University of Kansas in Lawrence, Kansas, USA was used to conduct the study. The CDR has roof mounted Yingi Solar 235 W PV panels. The total system capacity is 4.23 kW. Nine panels are over a green roof and nine others are over a black roof as shown in Figure 1. The PV modules’ electrical features are presented in Table 1. The tilt angle for all the panels was fixed at 10° facing south. The PV panel dimensions are 1.65 m by 0.99 m and mounted in landscape orientation. The height of the panels’ bottom frame, with respect to the roofing system, is 0.2 m. The distance between each row of PVs is 0.4 m.
The green roof portion is a tray-based green system. Concerns were raised regarding the survival of the vegetated roof under the PV panels. The native sedum plants that were selected need a minimal amount of solar radiation and irrigation. There were no major issues with the plants growing under the PV panels. The black roof membrane is a bitumen membrane. The roof configuration is shown in Figure 2. Enphase M250 Microinverters were installed under each PV panel to monitor the energy production of each individual solar panel. Enphase Energy Inc. is an energy technology company headquartered in Petaluma, CA, USA. The Enphase Microinverter specifications are presented in Table 2.

Building roof surface types have an impact on the performance of PV panels. The variations of roof surface temperatures and ambient air above the roof impact the PV panel underside surface temperature which also impacts energy production. Since the green roof recorded lower surface temperatures than the conventional roof, PV panels over the green roof produced more energy than the PV panels over the conventional roof. The differences in energy production between the two systems are correlated with ambient air temperature. During hot days of the year, the magnitude of energy production differences is greater as shown in Table 4.
The performance differences varied across the analysis period as shown in Table 4. The larger differences occurred during the peak temperature of the day. During the cooler climate conditions, there were slight temperature differences across the three roofing types. For temperatures below 0 °C, the average AT-Green and average UST-Green were less than 1 °C warmer than AT-Black and UST-Black. For temperatures above 20 °C, the average AT-Black ranged from 0.6 °C to 2.3 °C hotter than the average AT-Green. The average ambient temperature peaks were 42.3 °C for AT-Black and 40 °C for AT-Green when the ambient temperatures from the weather station were above 38 °C. The average UST-Black ranged from 1.1 °C to 2.3 °C hotter than the average AT-Green for temperatures above 20 °C. The average underside surface temperature peaks were 52.6 °C for UST-White and 50.3 °C for UST-Green.
For the entire analysis period, EP-Green produced 19.4 kWh, which represents 1.4%, more electricity than EP-Black. In June, the EP-Green produced 5.7 kWh more electricity than EP-Black, which represents 2.4% more kWh output as shown in Table 4. In January, the EP-Green produced 0.51 kWh more electricity than EP-Black, which represent 1.1% more kWh output. The difference in December was 0.96 kWh, which represents 2.7%. Even though the actual production difference was less than 1 kWh, the percentage was higher than other months with greater production differences.
For this study, the highest ambient air temperatures were during June and July and the greatest variations in energy productions were also during these months. The impact of roofing types on the performance of PV panels is expected to be higher for sites with more days of ambient air temperatures above 25 °C. The height of PV panels from the roof surface was constant in the implementation of this study. The distance between the PV panels and the roof surface can also impact the thermal interaction. For a future study, it is recommended to study the performance of PV panels over a green roof and a conventional roof with different distances from the roof surface.

This project was supported in part by Enphase Energy Inc. (Petaluma, CA, USA) through their donation of Enphase Microinvertors which were used to monitor the performance of each PV panel. The Center for Design Research provided the researchers access to their PV panels. 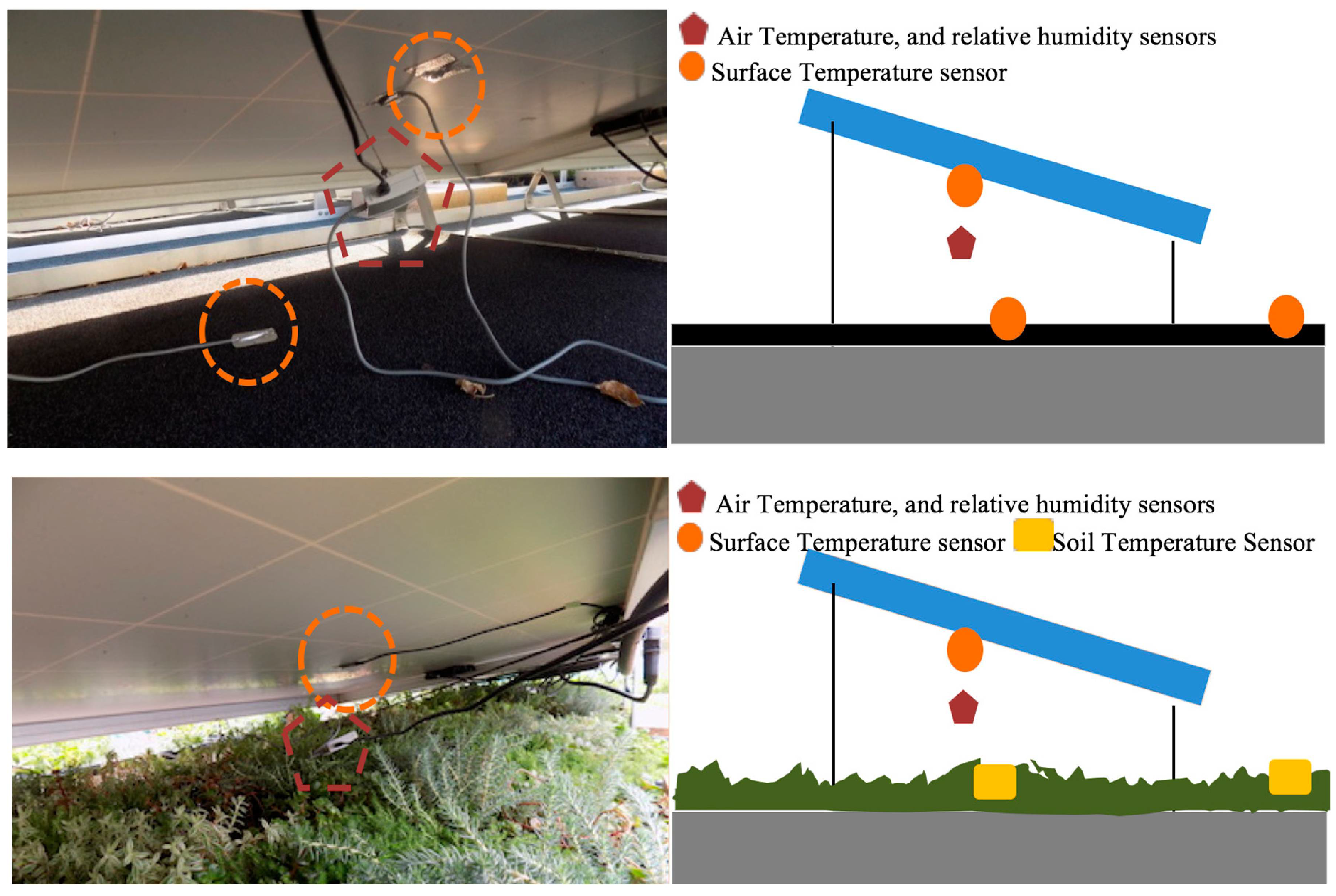