To better understand the mechanical behavior of rock with brine saturation, conventional triaxial experiments were carried out on sandstone for a range of confining pressures (0–60 MPa) and NaCl concentrations (0–30%). As the confining pressure and NaCl concentration increased, the triaxial compressive strength, crack damage threshold, Young’s modulus, cohesion, and internal friction angle all increased. Real-time ultrasonic wave and acoustic emission (AE) techniques were used to obtain the relationship between acoustic behavior and stress level during the whole triaxial compression process. During the whole deformation process, the evolution of P-wave velocity and accumulated AE count could be divided into four phases. The microstructural characteristics of brine-saturated sandstone, before and after loading, indicated that the strength enhancement mechanism may be attributed to an increase in inter-particle friction resulting from salt crystallisation around the points of contact. The angle of friction increased by more than 86% at maximum NaCl concentration compared to that for distilled water. The NaCl deposition in the pore space resulted in nonlinear strength increases for the brine-saturated sandstone specimens with increasing salinity. The present study is expected to improve the knowledge of the strength and failure mechanisms of sedimentary rock in deep saline aquifers.
Keywords: sandstone; saline aquifers; strength; ultrasonic velocity; acoustic emission sandstone; saline aquifers; strength; ultrasonic velocity; acoustic emission

Underground water is anywhere in rock engineering, including geothermal reservoirs, hydropower dam and tunnelling and geological CO2 sequestration [1]. Rock–water interaction plays an important role in the stability and safety of rock engineering. In general, rock strength will be reduced by the presence of pore water [2,3]. The water weakening effect in rock strength is a result of mechanical and chemical effects [4,5]. Recently, the effect of brine water on the mechanical behavior of rock has been attracting attention, due to deep saline aquifer identified as one of the most promising sites of CO2 storage [6,7]. Therefore, the interaction between brine and rock is the emphasis of this study.
In previous studies, a series of laboratory tests were carried out to investigate the effect of brine on the strength properties and deformation behaviour of sedimentary rocks. Shukla et al. [8] conducted uniaxial compression tests for sandstone specimens with varying salinity including 0%, 2%, 5%, 10% and 15%. They analyzed the stress–strain responses, compressive strength, elastic modulus and peak strain, as well as the threshold stresses (such as crack closure stress, crack initiation stress and unstable crack propagation stress). Their experimental results also indicated that different types of sandstone material exhibited different responses to the salinity level. Rathnaweera et al. [9] performed uniaxial compression tests on brine-saturated sandstone specimens. Their experimental results suggested that the strength is enhanced with the increase of NaCl concentration values. The influence of NaCl concentration value and curing time on the mechanical behavior of sandstone under uniaxial compression were investigated by Nasvi [10]. Their experimental results showed that NaCl did not appear to have any obvious influence on the uniaxial compressive strength (UCS) of the tested sandstone.
However, to maintain the CO2 in a supercritical state (the critical temperature is 31.1 °C and the pressure is 7.39 MPa), the candidate saline aquifers for CO2 sequestration are located 800–2000 m below the earth’s surface [6,8]. At such depth, confining stress significantly influences the mechanical properties of reservoir rocks. Therefore, the study of the triaxial compressive behavior is very important for the understanding of brine and rock interactions. In the previous literature, only a few studies were conducted on the mechanical properties of brine-saturated sandstone under triaxial compression. For instance, conventional triaxial compression tests on sandstone specimens under dry and brine-saturated conditions were carried out by Zheng et al. [11]. Water softening and weakening effects on cementation resulted in strength reductions compared with the dry specimens. Rathnaweera et al. [12] tested sandstone samples with different confining pressures (e.g., 5–20 MPa) and brine salinity levels (0–30%) under triaxial compression tests. Based on the nonlinear relationship between the peak strength of brine-saturated sandstone and confining pressure, they proposed a modified strength criterion to simulate the experimental envelopes.
To date, the mechanism causing the differences in the triaxial mechanical behavior with various salinity level has not been fully investigated. Besides, in the previous studies on sandstone specimens under brine saturation, the real-time ultrasonic velocity monitoring technique was not used. Therefore, in this study, sandstone specimens saturated with varying NaCl concentrations were tested under triaxial compression with a range of confining pressures. Moreover, real-time ultrasonic wave and AE techniques were used to obtain the relationship between acoustic behavior and stress level under triaxial compression. The microstructural characteristics of brine-saturated sandstone (before and after loading) were qualitatively assessed using optical microscopy.

Most current CO2 sequestration in saline aquifers is surrounded by sedimentary sandstone material due to its adequate porosity and permeability. The maximum capacity of CO2 sequestration in deep saline aquifers is evaluated to be 200,000 Gt [6]. Quartz-rich sandstone with high permeability and porosity values, located in Zunyi City of Guizhou Province, China, were used for this study. The mercury intrusion porosimetry (MIP) result of the tested sandstone shows that the porosity is 16.20%. The surface digital photograph, X-ray micro computerized tomography (CT) slice and scanning electron microscopic (SEM) image are presented in Figure 1. From Figure 1, sandstone is a medium-grained, microscopically heterogeneous and macroscopically homogeneous material. The sandstone had an average bulk density of 2130 kg/m3. The average initial P-wave velocity of the sandstone was 2530 m/s.
All intact cylindrical specimens with 50 mm in diameter and 100 mm height were cored from the same block of sandstone, which resulted in a height: diameter ratio of 2:1 [13]. The mechanical properties of the tested sandstone are described below: the UCS was 50.61 ± 4.44 MPa, the elastic modulus was 12.06 ± 0.77 GPa, the Poisson ratio was 0.358 ± 0.008, the indirect tensile strength was 2.95 ± 0.11 MPa, the cohesion was 18.52 MPa and the internal friction angle was 38.82°.

In this research, a NaCl solution was used to saturate the sandstone specimens. Although in real saline aquifers, the reservoir solution is a mixture of ions, NaCl (typically 70–90%) is dominant [14]. According to the geological condition of deep saline aquifers, the brine concentration is in the range of 2–25 wt % [15]. Furthermore, with the increase of reservoir depth, the brine concentration increases. In the range of 800–2000 m depth, the brine concentration is usually high. The selected four different NaCl concentrations (i.e., 0%, 10%, 20% and 30% by weight) in this experiment covered the salinity range.
The prepared sandstone specimens were immersed in desiccators under vacuum as shown in Figure 2a. The mass of the sandstone specimens was measured regularly to evaluate the saturation. Figure 2b shows the evolution of mass change for the two specimens over time. It is clear that the mass reaches its maximum value after a short immersion time and then remains constant, which means that the tested sandstone has been fully saturated.
An optical microscope (HIROX Co., Ltd., Tokyo, Japan, model KH-8700E) was used to qualitatively assess the apparent influence of brine on the microstructure of uncompressed sandstone specimens. Figure 3 shows the optical micrographs at different NaCl concentration levels. In the dry condition, many pre-existing initial micro cracks were observed. After two months of distilled water saturation, the surfaces of the grains appeared smoother, which suggests that cuttings and other loose material (e.g., clay and clasts) have been washed away. Compared with the results before immersion, the micro pores and cracks are more obvious after water saturation (see Figure 3b). It is observed from Figure 3c,d that the inter-particle pores appear to significantly reduce in size with increasing NaCl concentration. Crystallized NaCl appears to grow around the sand grains and coalesce at the inter-particle contact points (Figure 3e). Similar NaCl depositions were also observed in brine-saturated sandstone [9,12].

All triaxial compression tests were performed in a GCTS high pressure and high temperature triaxial rock servo system (GCTS Testing Systems, Tempe, AZ, USA, model RTX-4000) at China University of Mining and Technology (CUMT). The testing system consisted of a triaxial cell, a hydraulic station, a microprocessor, a loading frame, and a confining pressure and pore pressure supercharger (see Figure 4a). The capacity of axial loading was 4000 kN, the capacity of confining pressure was 140 MPa, and the capacity of pore pressure was 140 MPa. In this experiment, both axial and circumferential deformations of specimen were measured by linear variable differential transducers (LVDTs) with a range of ±6 mm (see Figure 4b).
To detect the crack initiation, propagation and coalescence of micro-cracks, AE characteristics were monitored because they are related to the energy release during loading [16]. An AE measuring system (Physical Acoustic Corporation, Princeton, NJ, USA, model micro-II) was used to study the AE events in sandstone specimens. In each test, two AE sensors were used to achieve effective data acquisition during triaxial compression (see Figure 4b).
To further detect the internal damage of the sandstone under stress, compressional wave (P-wave) velocity measurements along the axial stress direction were conducted with an ultrasonic pulse transmission technique. In this work, the transmitter was positioned on the top end surface and the receiver was put on the bottom end surface of the specimen (see Figure 4b); an electric pulse was generated with a pulse generator, and the waveforms were recorded using a digital oscilloscope. The travel time was identified from the first cycle wave [17]. After the measurements, the P-wave velocity can be calculated using Equation (1):
Vp = h/t0
where Vp is the P-wave velocity; h is the length of specimen; and t0 is the travel time.

All sandstone specimens were loaded under conventional triaxial compression (σ2 = σ3). First, the desired value of confining pressure was applied on the specimen and then kept constant during the whole experiment. To ensure uniform hydrostatic stress for the specimen, a low stress rate of 4.0 MPa/min was selected. At the beginning, the GCTS RTX–4000 and ultrasonic measuring system were operated simultaneously. Second, the axial deviatoric stress was imposed on the rock specimen surface until failure occurred. The axial fore was loaded under displacement-controlled condition with a rate of 0.04 mm/min. The AE events were measured in real-time during the entire testing process. All the tests were carried out under undrained conditions in which pore fluids were not allowed to drain freely during loading, and the pore water pressure was not measured [12,18,19].
Different confining pressures were used to parametrically assess the relative effect of different reservoir depths, i.e., 0, 10, 20, 40 and 60 MPa. The corresponding maximum reservoir depth is 2400 m (assuming a reservoir rock density of 2500 kg/m3). All tests were carried out at room temperature (20 °C) in order to study the effects of brine concentration in isolation, and therefore assuming a negligible geothermal gradient.

This research was supported by the National Natural Science Foundation of China (51734009) and Fundamental Research Funds for the Central Universities (2015XKZD05). The first author also wishes to acknowledge the support of the China Scholarship Council and the GeoEnergy Research Centre. The authors would like to express their sincere gratitude to the editor and the anonymous reviewers for their valuable comments, which have greatly improved this paper. 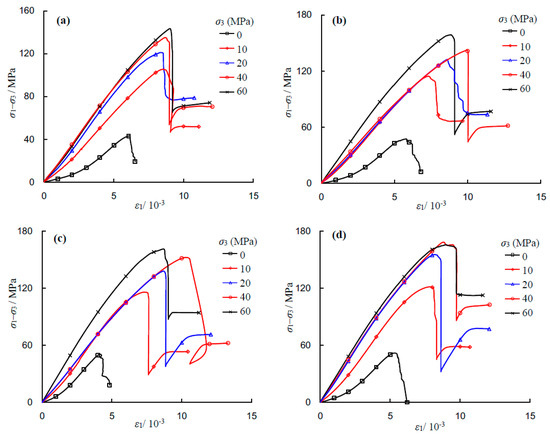 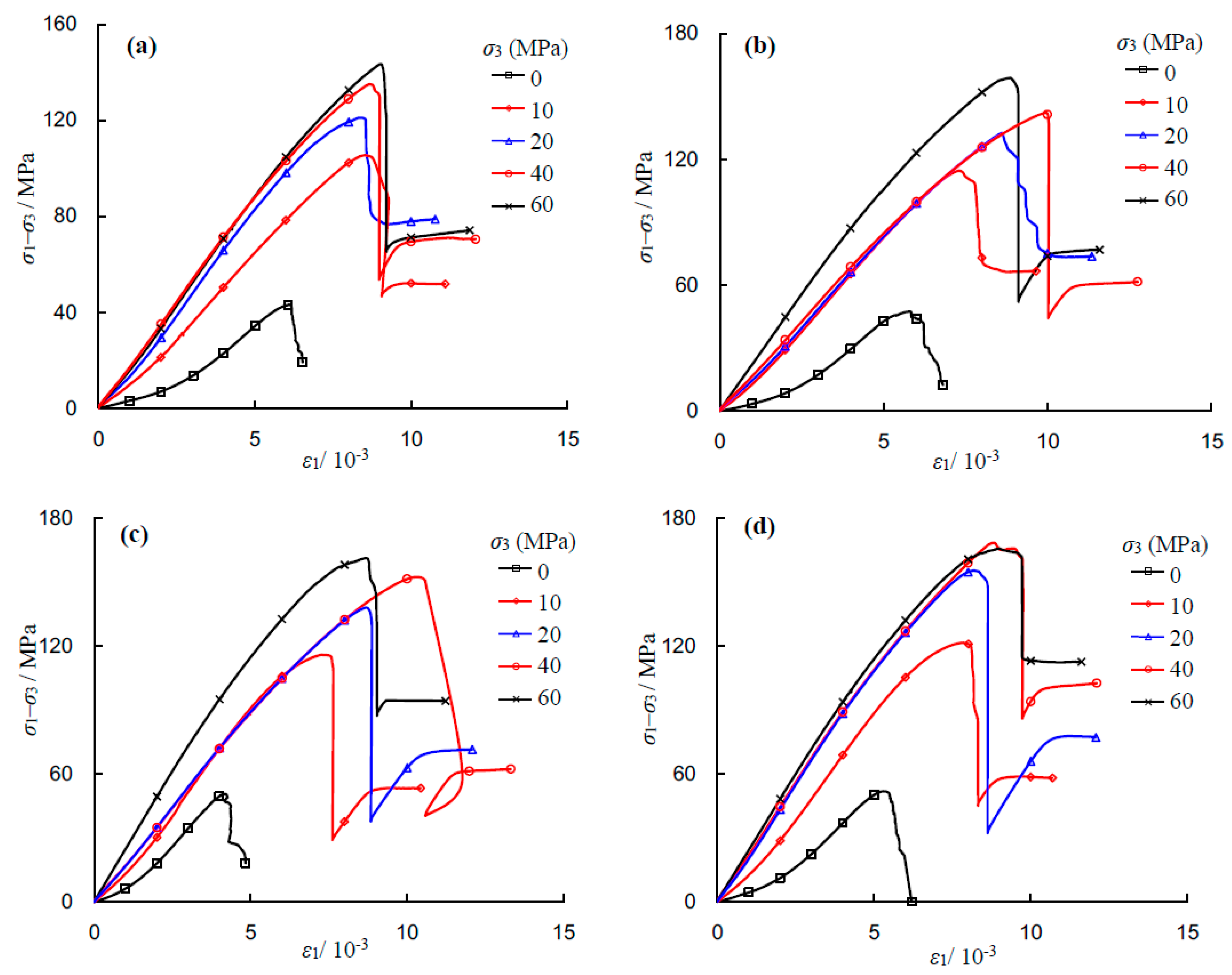 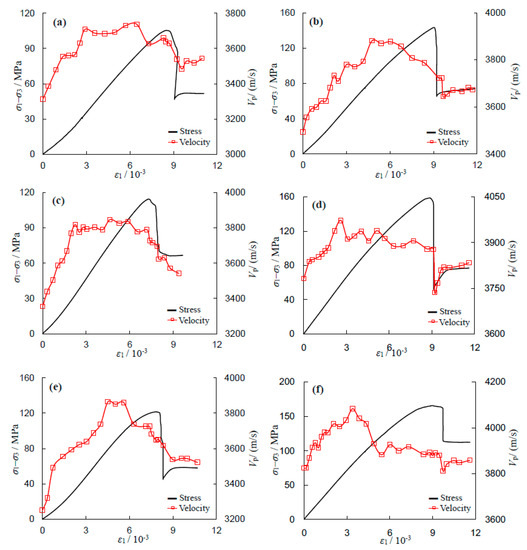 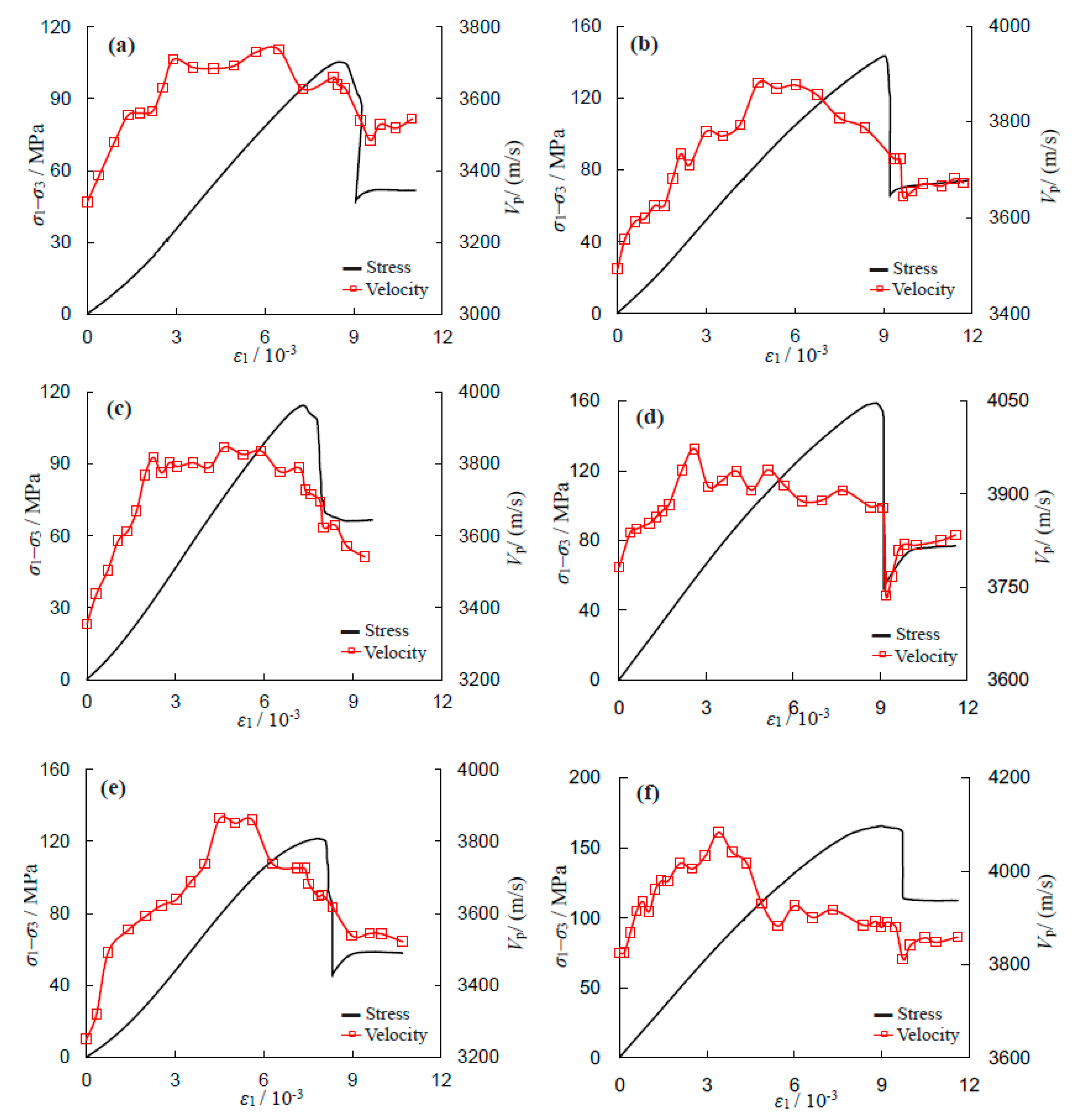 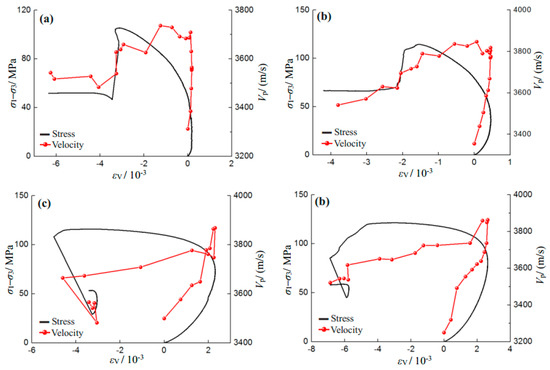 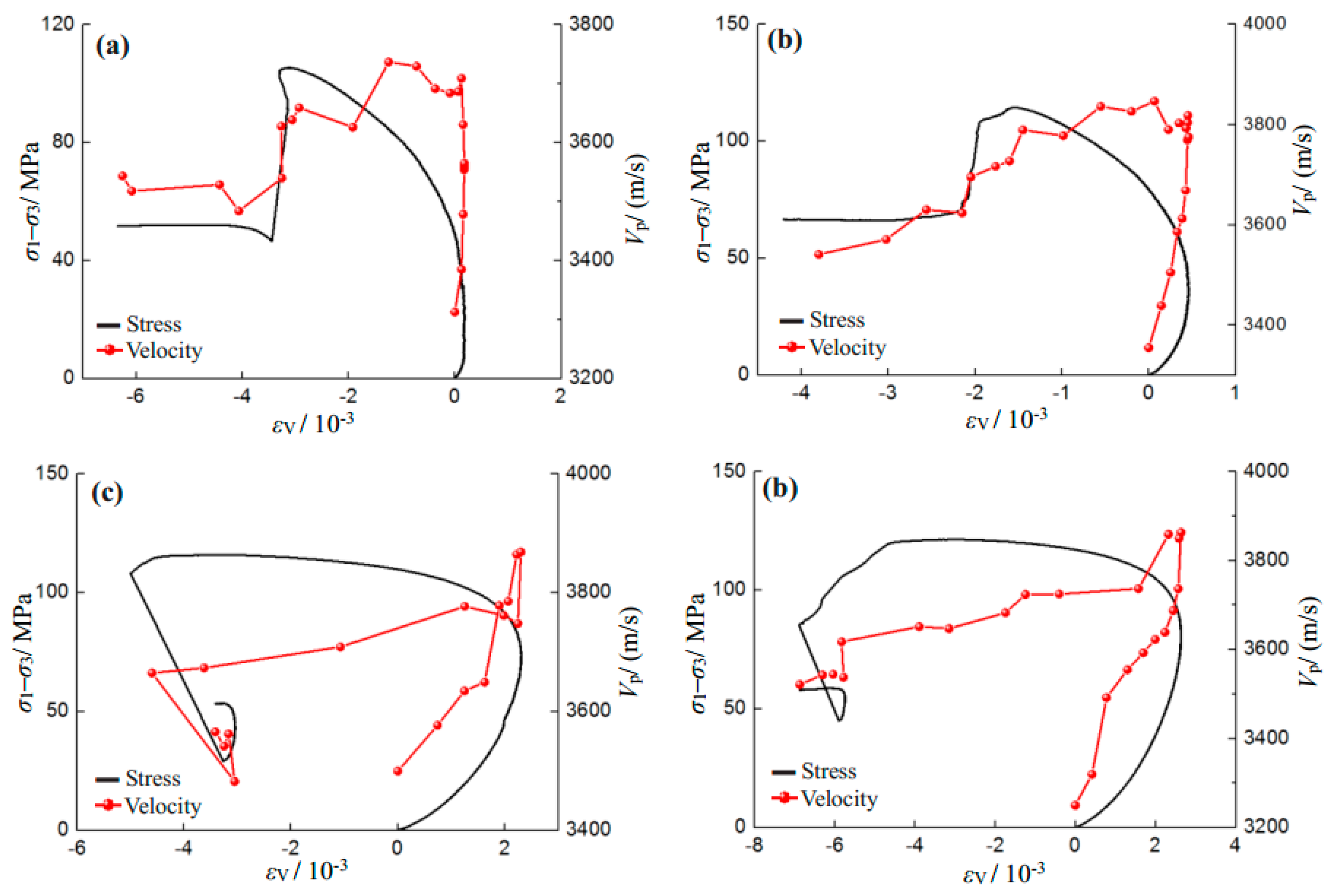 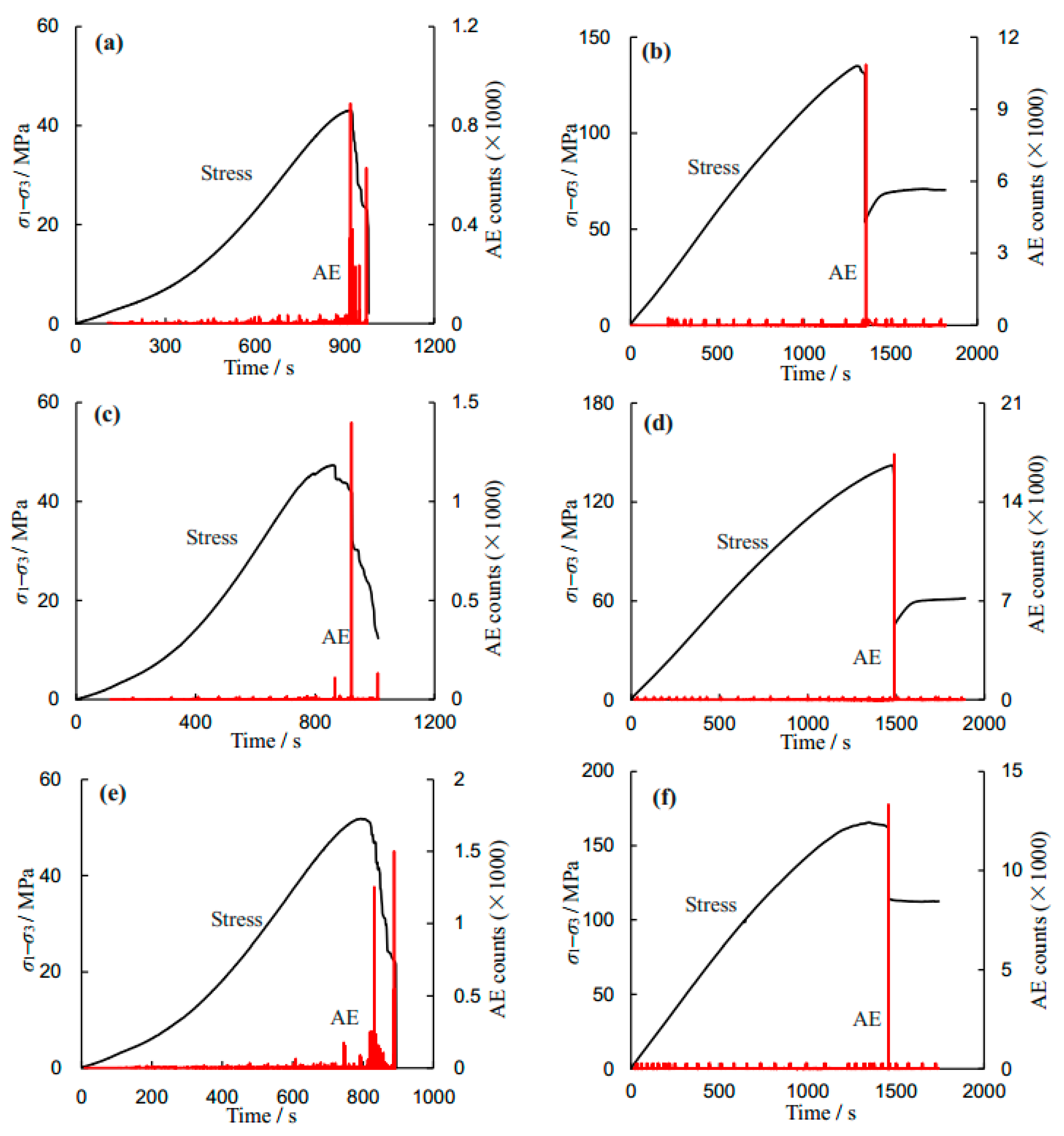 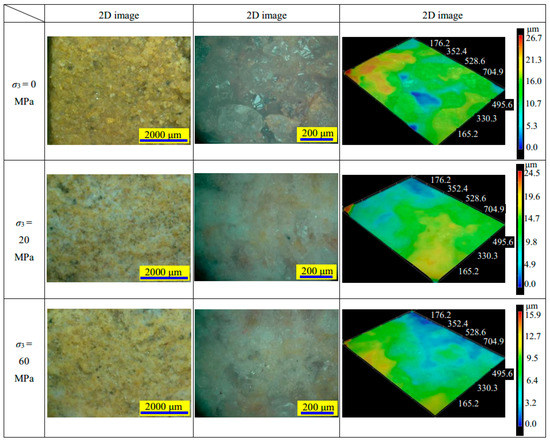 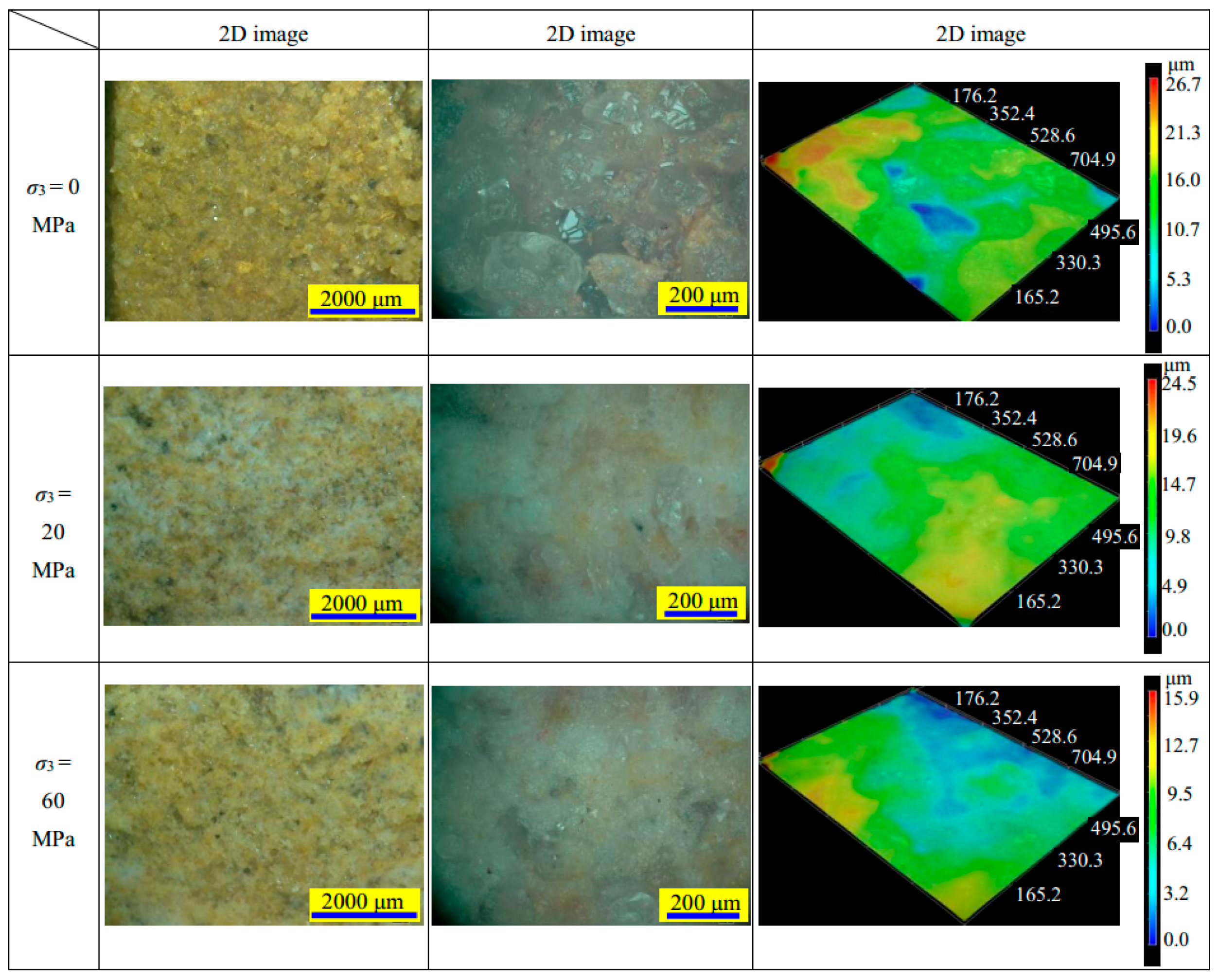 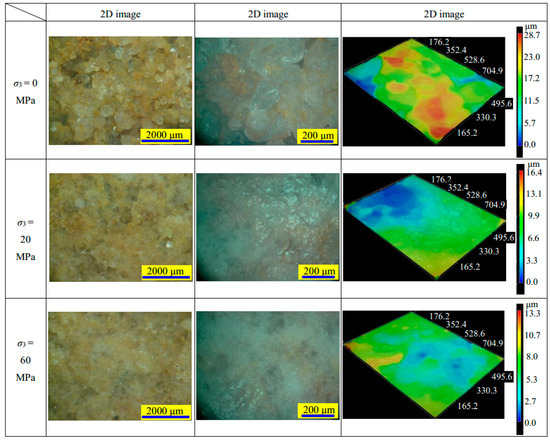