The aim of this study is to examine the possibility of using a stand-alone photovoltaic system (SAPVS) for electricity generation in urban areas in Southern Mexico. In Mexico, an urban area is defined as an area where more than 2500 inhabitants live. Due to constant migration from the countryside to the cities, the number of inhabitants of urban localities has been increasing. Global horizontal irradiation (GHI) data were recorded every 10 min during 2014–2016 in Coatzacoalcos in the state of Veracruz located on 18°08′09″ N and 94°27′48″ W. In this study, batteries represented 77% of the total cost, 12 PV panels of 310 W could export 5.41 MWh to the grid, and an inverter with an integrated controller and charger was selected, which decreased the initial cost. The city of Coatzacoalcos was chosen because the average annual temperature is 28°, with an average relative humidity of 75% and an average irradiance of 5.3 kWh/m2/day. An emission factor 0.505 tCO2/MWh of greenhouse gases (GHG) were obtained, based on the power system, the reduction of net annual GHG would be 11 tCO2 and a financial revenue of 36.951 × 103 $/tCO2 would be obtained. Financial parameters such as a 36.3% Internal Rate Return (IRR) and 3.4 years payback show the financial viability of this investment. SAPVSs in urban areas in Mexico could be a benefit as long as housing has a high consumption of electricity. View Full-Text
Keywords: stand-alone; urban areas; Mexico; photovoltaic system stand-alone; urban areas; Mexico; photovoltaic system
►▼ Show Figures 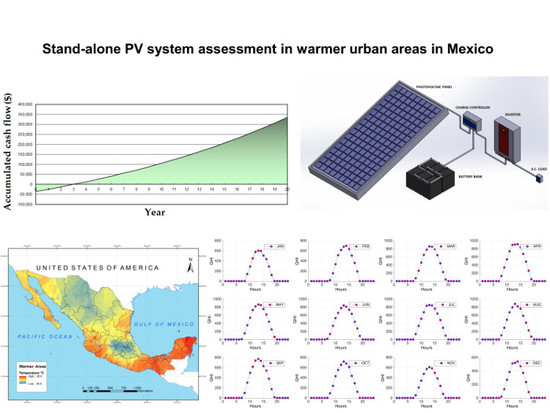