Smart grids are characterized by extensive measurement, automation, and communication infrastructures which allows a safe and optimized network operation that takes advantage of centralised ADMSs. The main role of any ADMS in this environment is to concentrate the field data to extract the required information about the network status and, in cases where control assets are in operation, compute and send the required control actions to optimize the network operation according to a given criterion.
Figure 1 depicts this centralised control approach. First, the smart meters are in charge of measuring the load demanded by industrial ( and ) and residential ( and ) clients. In addition, the RES active power injections, such as the wind turbine (WT) and photovoltaic (PV) plants, and , respectively, are measured.
All field data are sent to the ADMS by means of Remote Terminal Units (RTUs) at regular time intervals (typically 5 to 15 min). Considering all this information, it is possible to compute setpoints for the installed control assets using an OPF to optimize any technical or economic objective. This paper considers the following control assets:
On the other hand, the selected OPF objective is to minimize the active power losses of the system to take advantage of the already available control assets to optimise the operation of the distribution grid, which leads to the following formulation: where is the set of control variables () and is the set of load and generation power injections for a given time interval ().
The optimization problem is completed by including the relevant constraints. First, the network operational limits have to be considered. The voltages and currents of the sets of buses, , and branches, , have to be within the regulatory boundaries, , and below the cable ampacities, , respectively, as stated in (2) and (3):
Second, the OLTC tap has to be within the limits and the apparent power levels of the RES and DC-link VSCs have to be below their rated capability according to (4)–(6):
Finally, other constraints which are included in the OPF are the active and reactive bus power balances and the power constraints that model the DC link behaviour, which can be found in [26].

The objective of building the laboratory testing platform was to faithfully represent the real behaviour of an active distribution system including all of its components to asses the performance of the centralised control strategy outlined in Section 2. In this way, the testing platform was built based on the MV benchmark distribution network proposed by the International Council on Large Electric Systems (CIGRE in french) Task Force C06.04.02 devoted to study the RES integration in MV networks [27]. The main reasons that motivated the selection of this system are detailed below:
The next subsections present the MV benchmark distribution system and its scaled-down version built in the laboratory for testing purposes, including the implemented control scheme and the communication infrastructure designed to operate the system as a flexible platform to evaluate the benefits of active distribution networks.

A one-line diagram of the benchmark distribution system is shown in Figure 2 which is composed of two radial subsystems departing from a primary substation where a 40 MVA 110/20 kV transformer equipped with an OLTC is installed. The total network comprises 14 buses grouped in two radial feeders: 11 buses for subsystem 1 and 3 buses for subsystem 2. The total line length of subsystem 1 is about 15 km, while subsystem 2 is just 8 km. In addition, different types of load, involving industrial and domestic customers as well as a large amount of RES, are connected into the different buses. Although [27] considered different types of RES, this work exclusively included PV and WT plants because its current maturity foresees that they will be massive deployed in upcoming years. In addition, the benchmark network includes a DC link to connect both radial subsystems between nodes N8 and N14.
The 24-h profiles of the total loads and RES of subsystems 1 and 2 are depicted in Figure 3. It is interesting to point out that subsystem 1 was more loaded than subsystem 2. Moreover, most RES were located within subsystem 1 which partially compensate for its higher load with this local generation. It is also worth noting that, in order to analyse a case with a massive RES penetration, the generation was multiplied by 4 and 400 in the case of the WT and PV plants, respectively, with respect to the scenario described in [27]. In this way, the peak generation of the RES units and the peak demands of the loads during the day were established at 0.446 pu and 0.381 pu, respectively (the base power of the MV system was 100 MVA). The ratio between the peak generation and the peak demand was equal to 1.1724—a scenario of high-RES penetration.

This subsection provides a brief outline of the components and functionalities of the scaled-down testbed used to validate the benefits of the centralised controller. Basically, this hardware test rig, depicted in Figure 4, is a three-phase scaled-down 400 V (base/rated voltage) and 100 kVA (base/rated power) representation of the MV benchmark network described in Section 3.1 which is composed of the following components:
A comprehensive description of this scaled-down system can be found in [25]. In addition, two new elements were incorporated with respect to the system described in [25] with the aim of integrating additional active control resources:
The optimal setpoints for these two control assets are also managed by the SMS in a similar manner to that of the OLE power references.

The control system is a two-level hierarchical structure, as shown in Figure 5. The first control level comprises the SMS, which is in charge of sending the references to the hardware components, whereas the second control level is composed of several LCs attached to the hardware devices (OLEs, DC link and OLTC) that are responsible for tracking these references.
The SMS performs two tasks in a sequential manner which can be summarised as follows:
The second level of the control system is composed of the LCs of each OLE, the DC-link VSCs, and the transformer OLTC which are implemented in Digital Signal Processors. These are in charge of tracking the setpoints sent by the RTCS during the online operation.
The communication infrastructure required to connect the centralised RTCS with the LCs is based on a 100 MBs Ethernet local-area network as a physical layer that implements a communication protocol based on UDP/IP. Finally, an asynchronous communication protocol, TCP/IP, is implemented between the host PC and the RTCS.

This section describes the analysis of the performance of the centralised control on the scaled-down system under different test cases. These are evaluated through KPIs to quantify the influence of the considered control assets in high-RES active distribution networks.

Table 2 shows the definitions of the designed test cases. The first case, C1, is the base case where no control assets are included in the distribution system and the OLTC is set in the central tap position. The subsequent test cases add the control assets in the centralised control in an incremental manner. In this way, it should be possible to quantify the impact that each control asset has on the system’s performance.

The following KPIs were selected to analyse the performance of the centralised control and its related control assets:

This paper assessed the benefits of a centralised controller for active distribution networks with high-RES penetration in an experimental manner. The paper proposed the optimization of the operation of the system through the minimization of active power losses through an OPF with the following control assets: (i) transformers equipped with OLTC, (ii) RES reactive power injections, and (iii) DC links. The assessment of the proposed centralised controlled was carried out on a laboratory scaled-down version of the MV network that was proposed by the CIGRE Task Force C06.04.02. This testing platform was described, including its main components and functionalities as well as the new control assets (transformer OLTC and DC link) which were incorporated into a previous version to improve its testing capabilities. The paper defined a comprehensive design of the testing procedure including some test cases involving different control assets and a set of KPIs to allow a quantintative comparison of performance. The obtained results revealed that a centralised control of high-RES active distribution networks may improve their operation. As a matter of fact, the obtained results, ranging from 15% to 25% of active power loss reduction, are consistent with those of similar works commented on in Section 1. Moreover, this improvement is significant for control assets which are commonly present in distribution networks, i.e., transformers with OLTC and RES reactive power injections. This enhancement could be even larger if uncommon but matured technologies, like DC links, were progressively introduced into the distribution business. This would increase the RES network hosting capacity, contributing to the decarbonization of our society. 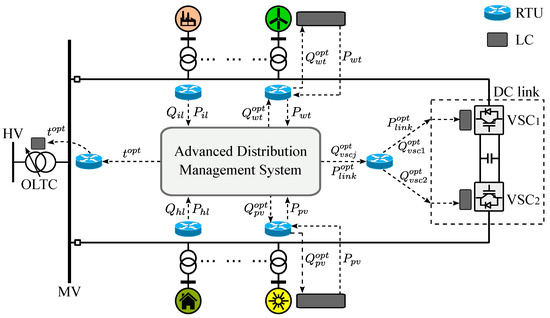 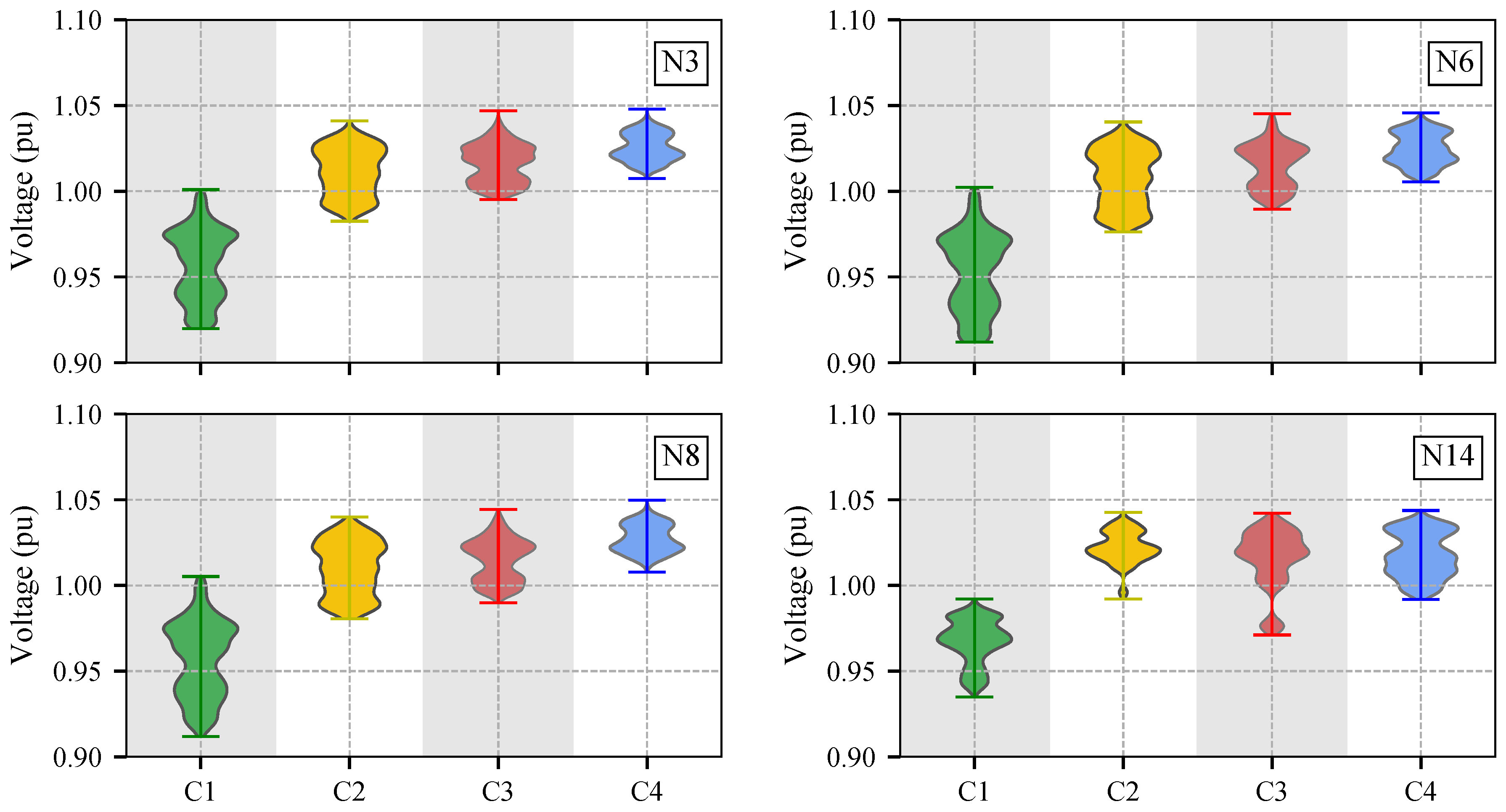