In recent years, distributed generations based on renewable energy sources (RESs) such as photovoltaics and wind generations have been paid more attention from researchers in many parts of the world [1]. In order to improve the integration of distributed generations (DGs) into the distributed network, the MG system that is composed of different DGs, energy storage systems, and controllable loads was developed [2]. The DGs are interfaced with the MG bus using two types of power converters, namely the grid-feeding converter and the grid-forming converter [3]. Whereas the grid-feeding converter is used to regulate the power exchange with the MG system, the grid-forming converter controls the system voltage and frequency in the stand-alone mode [4].
In order to exchange power among DGs, the droop controller that imitates the steady state characteristic of a synchronous generator is usually considered as a practical method without the need of communication link. Thus, managing the power delivery of the system is costly. The droop control strategy was originally proposed for the uninterruptible power supply (UPS) system that contains several grid-forming units [5,6,7]. The UPS system is usually supplied for local loads, where the line impedances are similar. In the islanded microgrid with multiple power converters connected in parallel with loads, the line impedances are much different and dominantly resistive, which affects to the performance of voltage and frequency of the system. The P-ω droop control was extended to the parallel inverters based DGs in the stand-alone MG [8]. However, in comparison with the conventional power system where line impedances are mainly inductive, the line impedances in MG are dominantly resistive, causing several problems in the operation [9]. Consequently, several studies have been proposed for improving droop controller in the parallel stand-alone MG. Instead of using a conventional P-ω droop controller, the P-V droop controller was proposed to deal with the inaccurate reactive power sharing problem [10]. In addition, a virtual impedance was introduced to imitate a virtual inductor for the impedance line [11]. On the other hand, the author in [12] proposed a virtual frame transformation to decouple the relationship between the active and reactive power and enhance the performance of the system. The adaptive decentralized droop controller was introduced to preserve power sharing stability and reduce power oscillation [13]. Furthermore, a detailed analysis of the droop controller applied in the parallel operation of DGs was discussed. The droop coefficient was also optimized by using particle swarm optimization (PSO) to improve the performance and stability of the distributed system [14].
Although the droop controller has been widely adopted in the stand-alone MG, it still has several drawbacks. In a conventional power system with massive rotating generators, the inertia stored in the rotor of synchronous generator plays an important role to maintain the system stability. However, an MG system, which is a small-scale power system, already has a relatively small inertia response [15]. In addition, the RESs are interfaced with the AC bus by the power converters based on the droop controllers, which contributes small inertia response to the MG system. After large disturbance such as generator tripping, system fault, or significant load changes in the MG system with low inertia response, the system voltage and frequency might fluctuate significantly, which may trip the generator or sensitive load [16,17]. Low inertia response of the MG system might pose challenges to the operator for maintaining the system stability [18,19].
In order to tackle the problem, virtual synchronous generator (VSG) control, which provides virtual inertia to the MG system, was first introduced in [20]. By imitating the steady state and the transient behavior of the synchronous generator, the total inertia of the MG system can be increased [21]. The detailed analysis of VSG control and droop control was studied in [22], showing the effectiveness of the VSG control over droop controller in term of the stability field. Various studies have proposed, taking the advantage of VSG controller for the MG in both grid-feeding converter and grid-forming converter [23,24]. The author in [25] introduced a VSG-based grid-feeding converter for a short-term energy buffer to smooth the power fluctuation of DGs. Besides, a modification of VSG with frequency deviation for the grid-forming converter was proposed to improve the transient response of the MG system [26]. Additionally, the parameters of the VSG controller are designed and analyzed in [27,28]. However, comparing to the MG system with only grid-forming or grid-feeding converters, the overshoot of the transient response in the MG system with both power converters is much higher due to the different response time of two converters [29].
In previous studies, the transient response of the power converters was not considered in both the droop controller and the conventional VSG controller. In order to address this gap, the major contribution of this study is to propose a VSG control for reducing the transient response of the power converters in the MG system. The output power derivation of power converters is added in the VSG controller to improve the primary response of active power and frequency under the load transient. The small signal analysis of the conventional VSG controller and proposed VSG controller is carried out to show the improvement of the transient response in the case of using the proposed VSG controller. The root locus of the systems is obtained from the mathematical model of both methods to evaluate the effectiveness of the proposed VSG controller. An analysis of virtual inertia and virtual damping factor of the VSG controller is studied to demonstrate that the system stability can be improved by changing the virtual damping factor and virtual inertia factor.
The rest of this paper is organized as follows: Section 2 briefly presents the structure of inverter-based distributed generator in the stand-alone MG. In Section 3, the principle of the proposed VSG controller is discussed. System parameters and simulation results of the proposed VSG controller are analyzed in Section 4. Finally, the conclusion of the paper is given in Section 5.

This work was supported by the Korea Institute of Energy Technology Evaluation and Planning (KETEP) and the Ministry of Trade, Industry & Energy (MOTIE) of the Republic of Korea (No. 20168530050030). 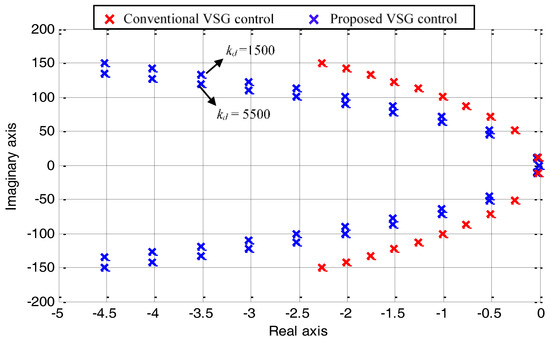 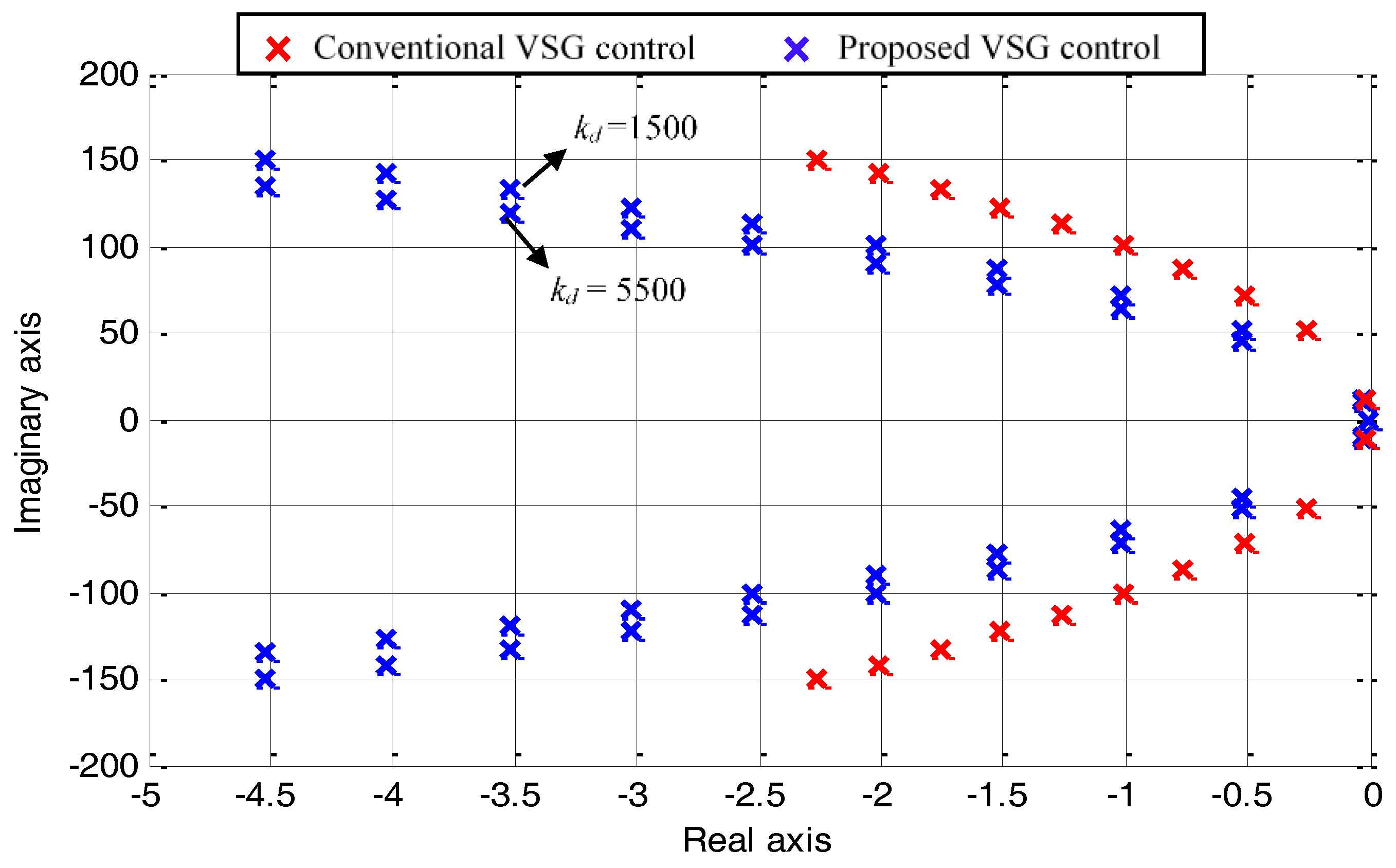 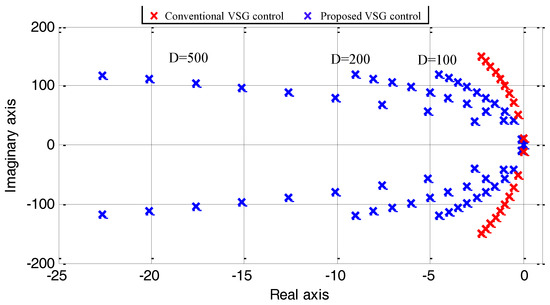 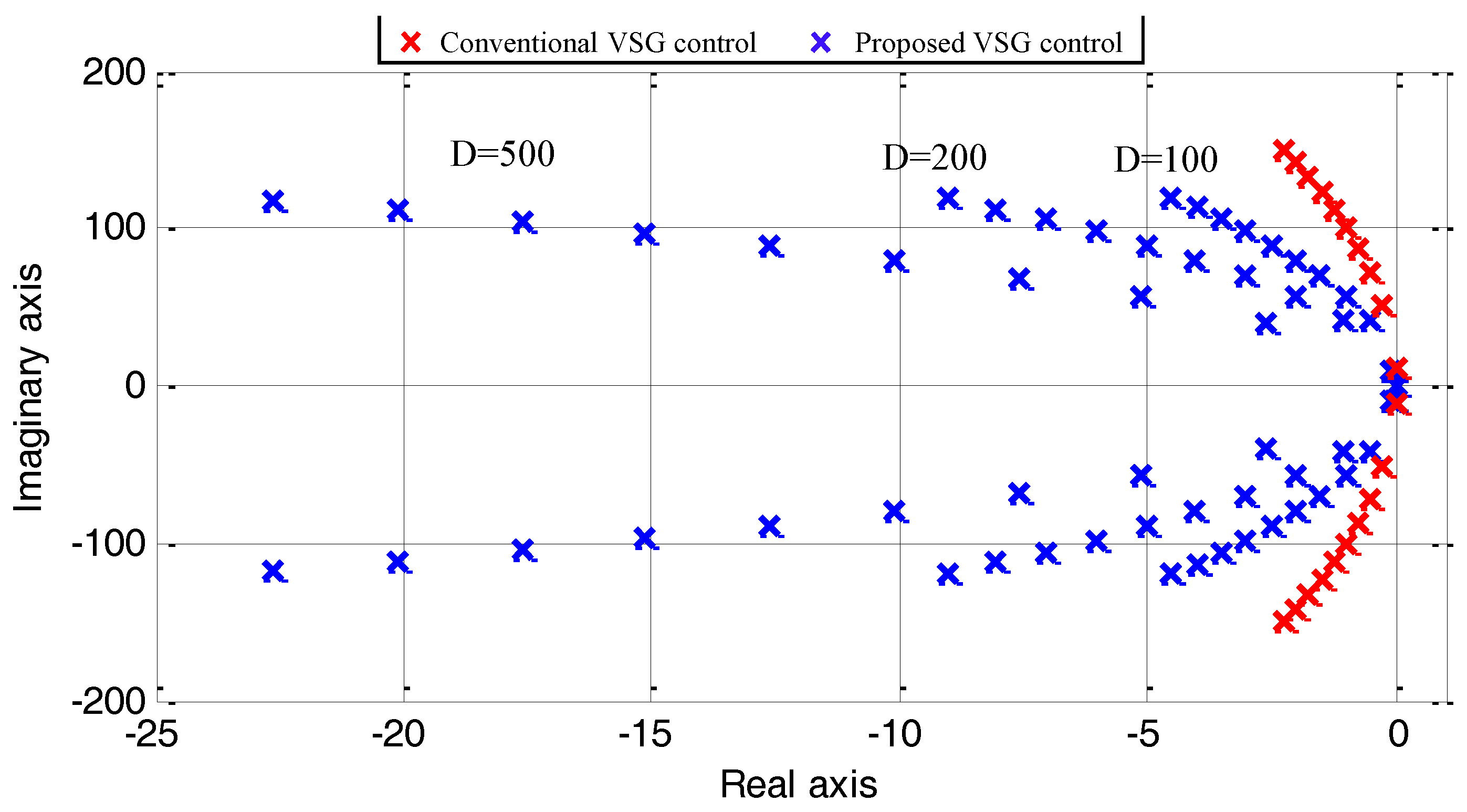 Table 1. System parameters.
Table 1. System parameters.
© 2017 by the authors. Licensee MDPI, Basel, Switzerland. This article is an open access article distributed under the terms and conditions of the Creative Commons Attribution (CC BY) license (http://creativecommons.org/licenses/by/4.0/).
We use cookies on our website to ensure you get the best experience. Read more about our cookies here.
Accept
We have just recently launched a new version of our website. Help us to further improve by taking part in this short 5 minute survey here. here.
Never show this again