To cope with the progressive tightening of the emission regulations, gasoline and diesel engines will continuously require highly improved exhaust after-treatment systems. In the case of diesel engines, the selective catalytic reduction (SCR) appears as one of the widely adopted technologies to reduce NOx (nitrogen oxides) emissions. Thereby, with the help of available heat from exhaust gas, the injected urea–water solution (UWS) turns inside the exhaust port immediately into gaseous ammonia (NH3) by evaporation of mixture and thermal decomposition of urea. The reaction and conversion efficiency mostly depend upon the evaporation and subsequent mixing of the NH3 into the exhaust gas, which in turn depends upon the engine loading conditions. Up to now, the aggregation of urea after evaporation of water and during the thermal decomposition of urea is not clearly understood. Hence, various scenarios for the urea depletion in the gaseous phase that can be envisaged have to be appraised under SCR operating conditions relying on an appropriate evaporation description. The objective of the present paper is therefore fourfold. First, a reliable multi-component evaporation model that includes a proper binary diffusion coefficient is developed for the first time in the Euler–Lagrangian CFD (computational fluid dynamics) framework to account properly for the distinct evaporation regimes of adBlue droplets under various operating conditions. Second, this model is extended for thermal decomposition of urea in the gaseous phase, where, depending on how the heat of thermal decomposition of urea is provided, different scenarios are considered. Third, since the evaporation model at and around the droplet surface is based on a gas film approach, how the material properties are evaluated in the film influences the process results is reported, also for the first time. Finally, the impact of various ambient temperatures on the adBlue droplet depletion characteristics as well as the effect of gravity is pointed out. The prediction capability of the model variants is assessed by comparing the achieved results to each other and with experimental data. It turns out that satisfactory agreement between experiment and numerical predictions is achieved for a wide range of operating temperatures by using correlations by “Wilke and Lee” for urea and by “Fuller et al.” for water. The results are essentially sensitive to gravity. From subsequent comparisons of different ways to account for the thermal decomposition in the gaseous urea, a significant difference is observed. Finally, the 1/3 film rule widely used for evaluating the material properties in the film shows accurate prediction of both evaporation and thermal decomposition regimes of urea. View Full-Text
Keywords: SCR; NOx; adBlue; evaporation; multi-component; thermal decomposition SCR; NOx; adBlue; evaporation; multi-component; thermal decomposition
►▼ Show Figures 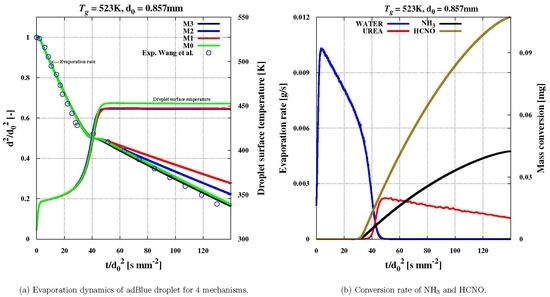