Risk Prediction and Assessment: Duration, Infections, and Death Toll of the COVID-19 and Its Impact on China’s Economy
Next Article in Special Issue

The Nelson–Siegel framework published by Diebold and Li created an important benchmark and originated several works in the literature of forecasting the term structure of interest rates. However, these frameworks were built on the top of a parametric curve model that may lead to poor fitting for sensible term structure shapes affecting forecast results. We propose DCOBS with no-arbitrage restrictions, a dynamic constrained smoothing B-splines yield curve model. Even though DCOBS may provide more volatile forward curves than parametric models, they are still more accurate than those from Nelson–Siegel frameworks. DCOBS has been evaluated for ten years of US Daily Treasury Yield Curve Rates, and it is consistent with stylized facts of yield curves. DCOBS has great predictability power, especially in short and middle-term forecast, and has shown greater stability and lower root mean square errors than an Arbitrage-Free Nelson–Siegel model. View Full-Text
Keywords: interest rates; yeld curve; no-arbitrage; bonds; B-splines; time series interest rates; yeld curve; no-arbitrage; bonds; B-splines; time series
►▼ Show Figures 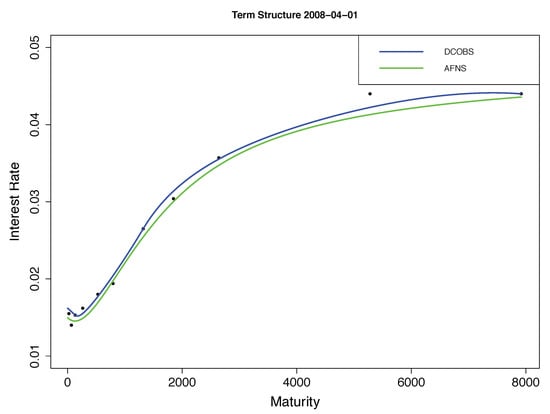