Chest tubes are routinely inserted after major thoracic surgery procedures and vary largely in literature in terms of size, numbers and timing of removal. Most of the surgeons prefer to leave two chest drainage tubes after thoracotomy for major pulmonary resections. However, it has been already reported that a single pleural drain after pulmonary lobectomy is safe and effective [1,2,3,4] but none of these studies is definitive.
The Smart Drain Coaxial (SDC) chest tube (Redax. Modena, Italy), is built with an internal lumen with distal bores for air evacuation and four external fluted channels for fluid drainage (Figure 1); this conformation allows to drain air and effusions along the entire length of the tube. This device has been already evaluated in a recent retrospective study [5], with promising results.
In this regard, the aim of this study is to compare the use of two standard tubes (STs) with one SDC after thoracotomy for pulmonary lobectomy. The primary endpoint aims at verifying the efficacy of SDC in terms of fluid and air drainage evaluating the daily quantity of fluids collected and the presence of postoperative pneumothorax or pleural effusion at radiological imaging; the secondary endpoint was to assess incidence of complications after chest tubes removal, postoperative pain, hospital stay and costs compared to STs. We present the following article in accordance with the CONSORT reporting checklist.

The study was approved by the institutional Ethics Committee of Policlinico Umberto I, Department PARIDE STEFANINI, informed consent was taken from all the patients and a trial registered in ClinicalTrials.gov (ID NCT04877925). Between February 2017 and April 2018, ninety-eight consecutive patients (57 M and 41 F, mean age 68.3 ± 7.4 years, median 69.0 ± 10.8) undergoing pulmonary lobectomy plus standard lymphectomy for lung cancer through lateral thoracotomy were included in the trial. Sample size has been calculated according to international literature on this topic and considering a confidence level at 95% and margin of error 5%. Inclusion criteria were: age more than 18 years; patient with lung cancer scheduled for open pulmonary lobectomy after a multidisciplinary team discussion. All patients were adequately informed and they have signed a consensus to participate. Exclusion criteria were: middle lobectomy, extended resections, minimally invasive lobectomies, previous ipsilateral thoracic surgery, induction chemo- and/or radiotherapy and patients who did not give consent to participate.
Patients were randomized into two groups using the block randomization procedure with a block size of 4: 50 patients received one upper 28 Fr and one lower 32 Fr standard chest tube (ST group) and 48 patients received one 28 Fr SDC tube (SDC group) both connected to a standard water seal. The result of randomization was communicated to the surgeon at the end of the surgical procedure, just before tube placement.

Clinical and surgical variables were prospectively collected including: age, gender, comorbidity, smoking history, type of surgery, intensive care unit (ICU) length of stay (days), stage, chest drainage daily fluid output (mL), daily air leakage (+/−), postoperative pain score assessed by a visual analogue scale (VAS), administration of analgesic drugs, steroids and diuretics, therapy at discharge, radiologic evaluation of pleural effusion, pneumothorax or subcutaneous emphysema, postoperative hospital stay and incidence of complications. Regarding the fluid output, the daily effusion and the total collection entered the analysis with the aim to compare any difference between groups in day-by-day output and in larger periods of time (first 3 days and overall hospital stay).
Postoperatively, chest X-ray (CXR) was routinely performed on the first and third postoperative day (POD). A −20 cm H2O suction was applied at the end of the operation and maintained until the removal of chest tubes. Chest tubes were removed when pleural effusion was less than 300 mL/24 h in absence of air leaks for at least 24 h. In case of double tube drainage, they are always removed at the same time. CXR was also performed 24 h after removal of the drainage.
The quantity of pleural effusion was evaluated with CXR using a 4-grade scale, as reported by Mammarappallil and colleagues [6], at the first and third POD, and after tube removal: 0—normal costophrenic angles; 1—fluid meniscus below the hemidiaphragms; 2—fluid meniscus at the level of hemidiaphragms; 3—fluid opacity obscures the hemidiaphragms.

Historically, textbooks recommended the use of two chest tubes after major pulmonary resections: one placed inferiorly to drain fluids and one towards the apex to facilitate lung expansion [9,10].
Recently, many studies reported that a single chest tube could be adequate [11]. Randomized clinical trials [1,2,3,4] compared the use of one chest tube with the standard two chest tubes in patients undergoing lobectomy disclosing no statistically significant differences in hospital stay, pleural drain capability and post-removal complications.
Moreover, recent meta-analysis [12,13,14] showed that the use of a single chest drain is more effective than two to reduce postoperative pain and to facilitate patients’ compliance to postoperative physiotherapy. This leads to a shorter hospitalization and reduction of costs. Despite that, some institutions still prefer to insert two tubes after thoracotomy to optimize fluid and air drainage [15,16]. In fact, there is still reserve in using a single chest tube after open thoracic procedure because of the possibility of avoiding suboptimal pleural space management. Moreover, there are still concerns about tube clotting, which is observed in up to 5.8% of the patients with one chest tube [5,17], and other complications such as loculated pleural effusion and inefficient fluid drainage of the costophrenic angle. At the same time, none of the clinical studies have shown the superiority of two standard chest tubes over a single chest tube after pulmonary lobectomy. In this regard, we have assumed that double chest tubes are still the most representative standard of practice worldwide.
Recently, a new flexible coaxial drain was developed to combine the benefits of two separate chest drains with the proven advantages of one chest tube. It is made of biocompatible silicone and is composed by four external fluted channels for fluids drainage and an internal section which allows separate air evacuation from appropriate distal bores. Compared with STs, the draining surface area provided by SDC is considerably wider and resistant to clot occlusion. Furthermore, Guerrera et al. showed that SDC provides a satisfactory air evacuation even in patients with significant air leaks [18].
In 2017, Rena et al. [5] retrospectively compared 52 patients treated with SDC with 104 patients with the standard two chest tubes after open or VATS lobectomy: SDC resulted “non-inferior” in fluid and air evacuation, hospital stay and rate of postoperative complications. However, one of the limitations of that study was the retrospective nature and the absence of randomization.
This is the first randomized clinical trial comparing the use of two standard tubes with one SDC. SDC resulted as an effective option after pulmonary lobectomy. Regarding fluid drainage, the SDC group showed a lower fluid evacuation compared to ST group, in particular during the first three PODs. However, at CXR there was no difference between the two groups in terms of pleural effusion, suggesting that one SDC tube provides sufficient cleaning of the chest cavity. Indeed, the draining surface provided by SDC is wider than both superior and inferior STs. Thus, the higher fluid evacuation provided by two STs, estimated at approximately 50 mL per day, might be the effect of the pleural reaction to the presence of a double big bore catheter.
Concerning air aspiration, SDC appears “non-inferior” to STs. The air leaks rate is similar between the groups, as well as the rate of PALs. SDC provides adequate air evacuation even in the presence of high flux air leaks. The rate of fixed pleural space [19], defined as incomplete re-expansion of the lung after resection in absence of air leaks, is similar in the two groups and it seems more related to patients’ characteristics than to inadequate air evacuation.
In our series, SDC group showed a significantly shorter hospitalization. This could be explained with the tendency of patients to promptly adhere to mobilization and physiotherapy. In fact, even if the mean postoperative pain showed no significant differences between the groups, the SDC group showed a significantly lower pain in POD1. This topic is crucial in the era of enhanced recovery after surgery (ERAS). Late mobilization has been proven to be an independent factor correlated to delayed discharge and increased morbidity [20]. Furthermore, ST patients more often required additional analgesic drugs: this implementation suggests inadequate pain control despite the fact that we didn’t find a difference in VAS score. However, the comparison between a double chest tube versus a single chest tube technique might be quite obviously associated to a better outcome after a single chest tube. This assessment could lead to a future research interest for comparing single SDC versus a single standard chest tube.
Finally, although costs of single SDC are remarkably higher compared to STs, the shorter hospital stay and lower analgesic drugs administration drop the total costs.
This study presents some limitations: although it is a randomized study, the number of patients is relatively small. Different surgeons performed the surgical procedures with no standardization in the use of hemostatic agents. We do not compare the SDC tube with a single standard tube. The study is focused on open lobectomies and the supposed advantages of SDC tubes in VATS procedures need confirmation in other studies. Finally, this is a single center experience and larger multicenter studies are required to confirm our results.

Our results suggest that SDC might be a feasible option after open pulmonary lobectomy with similar results in terms of fluid draining capability, air suction and post removal complications compared to two standard chest tubes. Furthermore, the SDC group showed a lower analgesic drugs requirement, lower postoperative pain in POD1 and a shorter hospital stay and thus a reduction of costs.

The study has been approved by the Ethics Committee of Policlinico Umberto I, Department PARIDE STEFANINI on 26~January 2017 (ref. number 1/2017) and and then refreshed in 2020 to update the spectrum of data ref number 02/2020. 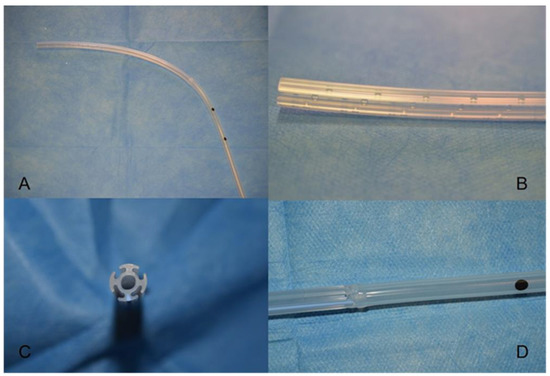