Ampullary Carcinoma: An Overview of a Rare Entity and Discussion of Current and Future Therapeutic Challenges
Previous Article in Journal

The patient is a 63-year-old with a height of 160 cm and a body mass index (BMI) 23.44. She is a Caucasian female without relevant comorbidities who has never smoked and who was diagnosed with a lung nodule in December 2015. The patient did not take any medication.
After a right upper lobectomy with lymphadenectomy, the histological diagnosis was pT2a pN1 stage IIB acinar-predominant lung adenocarcinoma.
In accordance with the disease stage, the patient received adjuvant treatment with cisplatin and vinorelbine, interrupted after one cycle because of acute renal failure and severe neutropenia.
In June 2017, as a consequence of positron emission tomography (PET) and endobronchial ultrasound transbronchial needle aspiration (EBUS-TBNA) detection of right hilar lymph node recurrence, the patient underwent ablative stereotactic radiotherapy at the level of hilar adenopathy (35 Gy/7 fractions). Molecular analyses were then performed on DNA/RNA extracted from a lung surgical resection specimen using a broad next-generation sequencing (NGS) panel (Oncomine Comprehensive Assay v3, Thermo Fisher Scientific, Waltham, MA, USA), and EGFR 19 deletion mutation (p.E746_A750del c.2236_2250del) was detected.
In July 2018, follow-up whole-body PET revealed disease progression with right pleural effusion intrascissural pleural nodules and right hilar lesion increase. Consequently, from September 2018 to October 2020 the patient received gefitinib (250 mg/die) with partial response.
In September 2020, whole-body computed tomography (CT) showed progressive disease with 19 mm liver lesion, a breast nodule, and a right hilar adenopathy.
Liquid biopsy was performed, but no T790M EGFR resistance mutation was detected. The patient underwent a tissue biopsy of the liver that showed an adenocarcinoma with positive thyroid transcription factor-1 (TTF-1) immunohistochemical staining, leading to the diagnosis of metastasis from lung adenocarcinoma. DNA extracted from biopsy specimen was subjected to NGS analysis (custom 26 panel, Thermo Fisher, Waltham, MA, USA), revealing the presence of the driver EGFR mutation (exon 19, p.E746_A750del c.2236_2250 del) and the EGFR resistance mutation (exon 20, p.T790M c.2369C>T).
Starting October 2020, the patient was given a second-line targeted therapy with osimertinib (80 mg/die). Meanwhile, the nodule in the right pectoral fascia was evaluated with mammography and ultrasound, which identified a 7 mm hypoechoic nodule, with partially undefined margins, without calcifications (Breast Imaging-Reporting and Data System (BI-RADS): 4a). After a fine-needle aspiration of the nodule showing TTF-1-positive and ER-positive tumor malignant cells, a quadrantectomy with sentinel lymph node biopsy was performed. Sentinel lymph node biopsy represents the gold standard for early breast cancer surgery and was necessary because of the uncertainty about the origin of the disease (primary breast cancer versus metastasis from lung cancer). This intervention made it possible to obtain much histological material to perform all the molecular and immunohistochemical analyses necessary to define the origin of the tumor.
Histologically, malignant tumor with glandular differentiation infiltrating the skeletal muscle tissue was seen. The neoplastic cells showed immunoreactivity to TTF-1, ER (95%), progesterone receptor (PR, 1%), human epidermal growth factor receptor 2 (Her-2/neu, 40%, ASCO/CAP score 2+), and Ki-67 (14%) and no expression of GATA-binding protein 3 (GATA-3). EGFR mutation (exon 19, p.E746_A750del c.2236_2250del) was detected with NGS molecular analysis.
Immunohistochemistry was retrospectively performed on archival lung and liver specimens. Neoplastic cells in the liver showed ER (90%) and Her-2/neu (40%, ASCO/CAP score 2+, FISH negative) expression. Positive ER (75%) and PR (2%) but negative Her-2/neu immunostaining were seen in the lung.
In December 2020, follow-up whole-body CT revealed liver partial response and hilar stable disease.
Therapy with osimertinib is still ongoing, and the woman has no evidence of tumor progression at the time of writing this report, and she has persistent, great clinical benefit.

This patient originally presented with a typical lung adenocarcinoma, from both the morphological and the immunohistochemical points of view. It consisted of a moderately differentiated proliferation of cells growing in an acinar pattern, partially surrounded by desmoplastic stroma (Figure 1A).
The appearance of a mammary nodule after a 5-year interval, on the other hand, presented a more difficult diagnostic challenge from clinical and pathological points of view.
Fine-needle aspiration of the lesion identified the presence of malignant tumor cells positive for both TTF-1 and ER and negative for GATA-3, an immunophenotype compatible with the known lung malignancy but not specific enough to exclude the possibility of a primitive mammary neoplasm. Formalin-fixed paraffin-embedded histologic samples obtained after surgical excision of the nodule showed a morphology superimposable to that of the lung primary neoplasia (Figure 1B). However, this observation alone was not enough to exclude a mammary origin: primary NST breast cancer often presents as a proliferation of ductal structures, whose pattern can be similar to the acinar growth of a lung adenocarcinoma.
For this reason, an immunohistochemical panel was performed. The neoplastic proliferation was positive for TTF-1 (Figure 1C), ER (Figure 1D), PR, and HER2 but negative for GATA-3. The morphology and the immunophenotype, coupled with the patient’s clinical history, strongly favored lung rather than breast origin. The diagnosis of a breast recurrence of lung adenocarcinoma was confirmed by molecular analysis that revealed the presence of the same EGFR mutation detected in the primary lung neoplasia (exon 19, p.E746_A750del c.2236_2250del NM_005228.4).

In conclusion, this clinical case underlines the importance of an in-depth diagnostic evaluation of women with breast lesion and a history of lung adenocarcinoma and the multidisciplinary management of these patients. Differential diagnosis between primary breast cancer and metastasis to the breast from lung adenocarcinoma is challenging and requires the combination of clinical, radiological, pathological, and molecular findings. This differential diagnosis is crucial for its therapeutic and prognostic value.
The main limitation of this article is the small number of clinical cases reported in the literature. Another limitation is represented by the clinical and biological heterogenicity of both breast and lung cancer; the choice of a precise histotype (adenocarcinoma) and a molecular subgroup (EGFR mutated) also aims to simplify this heterogeneous landscape.
Furthermore, in these cases of lung cancer expressing estrogen receptors, it would be interesting to evaluate both the activity of the association of the aromatase inhibitor or antiestrogen drugs with osimertinib and the addition of aromatase inhibitors/antiestrogens to osimertinib at progression during osimertinib treatment.

This work was partially supported by the Italian Ministry of Health with Ricerca Corrente and 5 × 1000 funds.

The data presented in this study are available in this article. 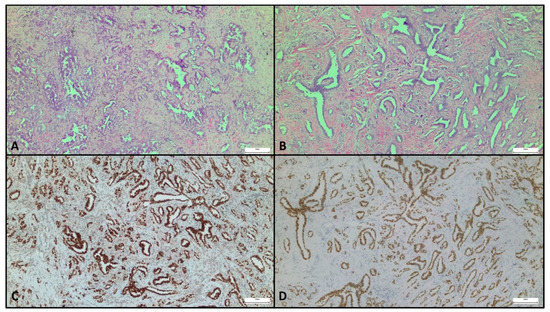 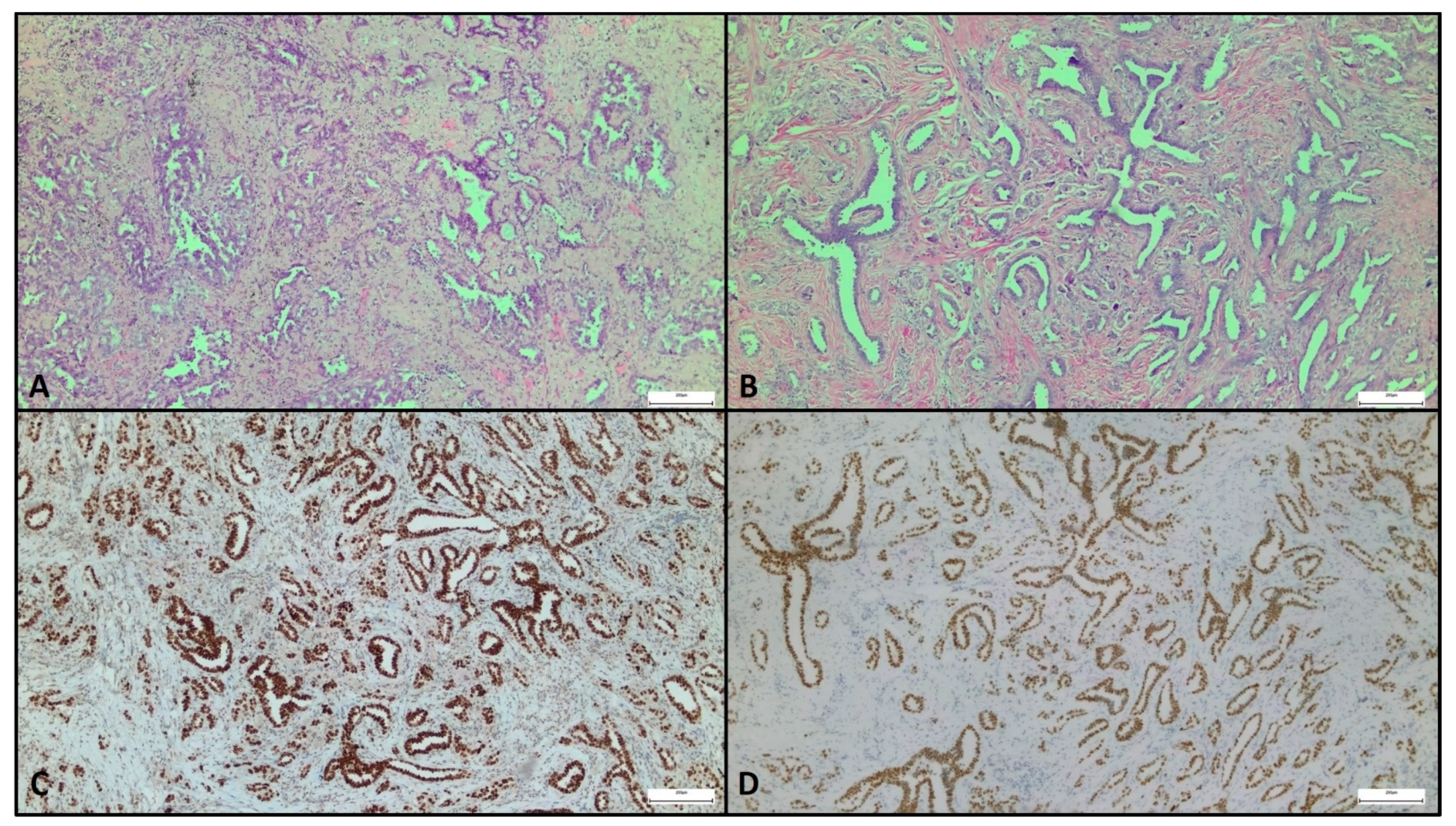