After approval of the local ethics committee, all patients who received prostate biopsies between January 2017 and June 2020 at the Department of Urology at Frankfurt University Hospital were in the prospective institutional prostate biopsy database and identified and evaluated retrospectively. Indications for performing a prostate biopsy were suspicious characteristics such as a digital rectal examination (DRE), suspicious PSA values (defined as suspicious absolute PSA, PSA velocity, PSA density, or PSA age cut-offs for each individual patient), or suspicion of prostate cancer on MRI, defined as PIRADS ≥ 3. This selection criteria yielded 606 prostate biopsy patients. All biopsies were performed by experienced urologists under a transrectal approach under antibiotic prophylaxis and periprostatic local anesthesia, as recommended and described [2,19]. For systematic biopsy, 12-core biopsies (length of 15–22 mm per core) were obtained with six biopsies per prostate lobe. Additional targeted biopsy was performed with a HiVison, Hitachi Medical Systems ultrasound machine, and at least two cores were taken from each mpMRI lesion ≥ PIRADS 3. Patients were firstly stratified according to the usage of IHC in pathological prostate biopsy results. IHC was performed in accordance with pathological guidelines, which recommend IHC stains to validate/reject prostate cancer diagnosis in suspicious atypical foci or to provide additional information about positive cores and/or core percentage of positive cores.

2.3. Changes in Biopsy Results and Changes in Clinical Decision Making

Patients with pathologically confirmed prostate cancer after prostate biopsies were subsequently stratified according to the performance of IHC (Figure 1). Furthermore, we classified changes after IHC performance as relevant if a change from initial high-grade prostatic intraepithelial neoplasia or atypical small acinar proliferation foci to prostate cancer diagnoses, or a change from unilateral to bilateral prostate cancer, occurred. Moreover, we relied on information from the institutional patient files and the prospective institutional radical prostatectomy database to identify subsequent treatment after additional IHC in prostate biopsies and to identify final pathological results if patients underwent radical prostatectomy. Clinically significant prostate cancer was defined as Gleason score ≥ 7 and/or ≥pT3 stage, as previously reported [20,21].

Descriptive statistics included frequencies and proportions for categorical variables. Means, medians, and interquartile ranges (IQR) were reported for continuously coded variables. The Chi-square test was used for statistical significance in proportions’ differences. The t-test and Kruskal-Wallis test examined the statistical significance of means’ and distributions’ differences.
Subgroup and sensitivity analyses were made to validate the effect of additional IHC in prostate biopsies in real-world clinical application. All tests were two sided with a level of significance set at p < 0.05, and R software environment for statistical computing and graphics (version 3.4.3, Vienna, Austria) was used for all analyses.

3.2. IHC in Patients with and without Prostate Cancer Detection

3.3. Changes in Prostate Biopsy Results due to IHC Stains

3.4. Treatments of Patients with Changes in Prostate Biopsy due to Positive IHC

Of 81 patients with changes in biopsy results due to positive IHC (Table 3, Figure 1), 42 (51.9%) underwent subsequent radical prostatectomy, 27 (33.3%) underwent active surveillance, and seven (8.6%) radiation therapy as a curative treatment concept. Conversely, three (3.7%) patients underwent androgen deprivation therapy or watchful waiting as a palliative concept.
Of those patients who underwent subsequently radical prostatectomy, 15 (35.7%) harbored pT2 and Gleason 6 in the final pathology, while 25 (59.5%) patients harbored significant prostate cancer with ≥pT3 and/or Gleason 7–10. Of those 25 patients, 16 (64.0%) initially harbored a unilateral and a change to bilateral prostate cancer due to IHC. Moreover, nine (36.0%) of those patients harbored a high-grade prostatic intraepithelial neoplasia or atypical small acinar proliferation foci initially and had a change to prostate cancer diagnoses due to IHC.

The authors declare that this study had no funding.

Approved by the local ethics committee of the University Hospital Frankfurt, Germany (SUG-7-2020).

Data will be made available for bona fide research on request. 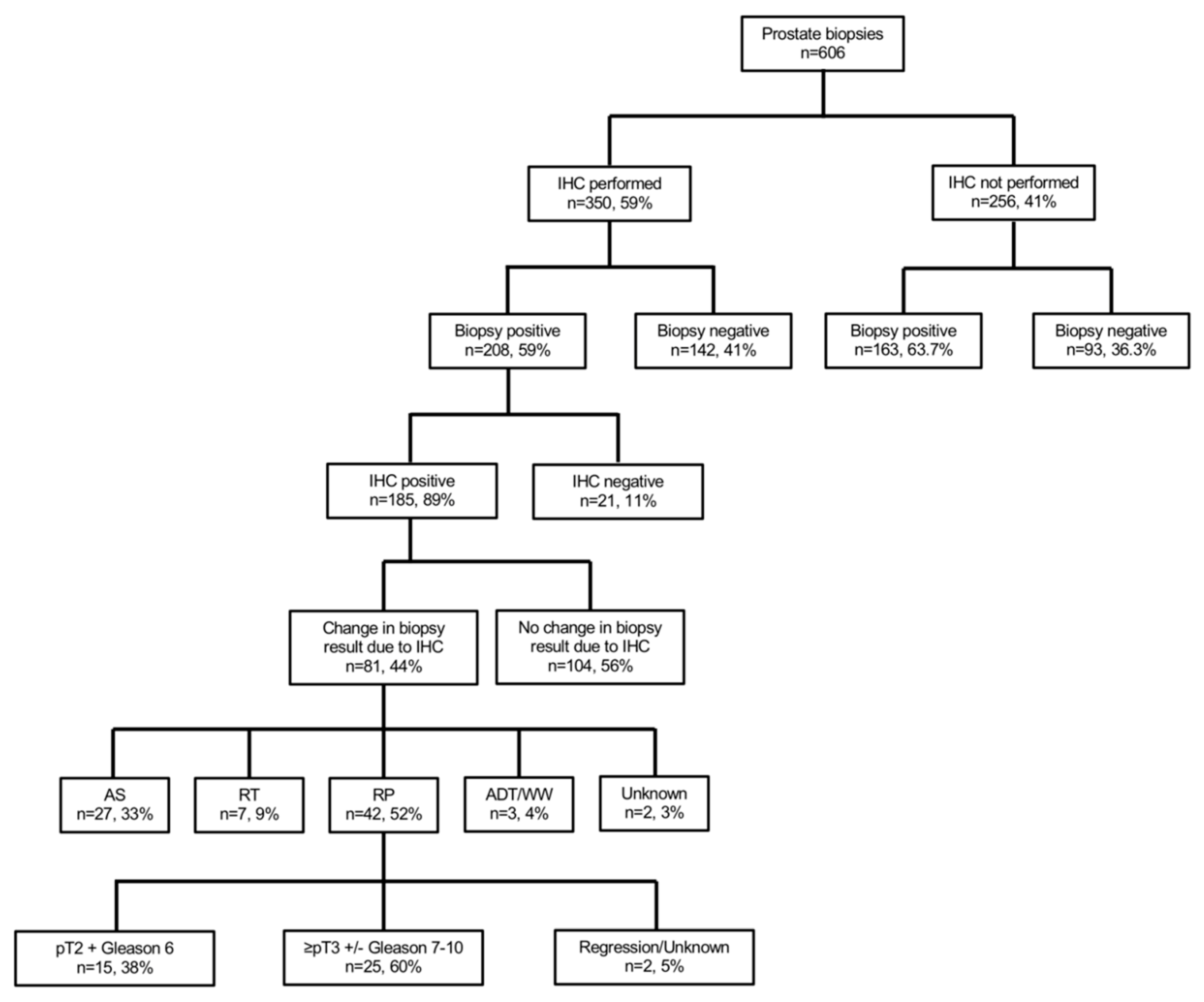