Background. Personalized therapy is becoming increasingly popular in oncological scenarios, not only based on molecular pharmacological targets, but also preventing any drug–drug–gene interaction (DDGI), which could lead to severe toxicities. Single nucleotide polymorphisms (SNPs), the individual germline sequence variations in genes involved in drug metabolism, are correlated to interindividual response to drugs and explain both efficacy and toxicity profiles reported by patients. Case presentation. We present the case of a woman suffering from triple-positive breast cancer; she had early-stage disease at the onset and after four years developed metastatic disease. During her history, she presented different toxicities due to antineoplastic treatments. Particularly, hypertransaminasemia was found during every line of treatment. Nevertheless, we were able to guarantee the patient an excellent therapeutic adhesion thanks to the supportive treatments and the reduction of drug dosage. Moreover, we conducted a simultaneous analysis of the patient’s biochemical and genomic data thanks to Drug-PIN software, and we found several significant SNPs of the main enzymes and transporters involved in drug metabolism. Conclusion. Our case report demonstrated the relevance of DDGI in clinical practice management of a patient treated for advanced breast cancer, suggesting the role of Drug-PIN software as an easy-to-use tool to prevent adverse events during cancer treatment and to help physicians in therapeutic algorithms. However, further studies are needed to confirm these results.
Keywords: hormone receptor positive (HR+); HER2+ breast cancer; drug-drug-gene interaction (DDGI); single nucleotide polymorphisms (SNPs) hormone receptor positive (HR+); HER2+ breast cancer; drug-drug-gene interaction (DDGI); single nucleotide polymorphisms (SNPs)

The idea of personalized therapy is becoming increasingly popular, not only on the basis of molecular targeted therapy, but also by considering any potential drug–drug–gene interaction (DDGI) to prevent adverse events during cancer treatment, in order to improve patients outcome [1]. Based on this consideration, the pharmacogenomics profile to define the DDGI and the use of smart software to easily understand the risk of toxicity during treatment could be very useful in personalized cancer management.
We present the case of a woman suffering from hormone receptor-positive (HR+) and HER2+ breast cancer, with metastatic disease after four years from cancer diagnosis. During her history, she presented different toxicities due to antineoplastic treatments. Particularly, severe hypertransaminasemia was found during every line of treatment. Thus, we retrospectively analyzed the SNPs of main enzymes and transporters involved in drug metabolism and showed the utility of Drug-PIN software in the management and prevention of adverse events during chemotherapy treatment.

We presented the case of a patient with advanced breast cancer and a peculiar genomic profile that resulted in reduced activity of both enzymes and transporters involved in the metabolism of chemotherapeutics commonly used in clinical practice. In the course of her clinical history, the patient developed a series of toxicities, especially liver toxicities, which we tried to associate with the SNPs identified by genomic analysis. Thanks to the supportive treatments, especially in favor of hepatic detoxification, and the reduction of the dosage of drugs, we were able to guarantee the patient an excellent therapeutic adhesion. However, the possibility to use an easy-to-use pharmacogenomics tool such as Drug-PIN software [1] to prevent toxicities during cancer treatment through the evaluation of both clinical and genomic factors, as well as by taking into account the use of concomitant drugs, could ensure the application of personalized medicine and better compliance with treatments. Further studies are necessary for the identification of predictive factors of toxicity of treatments used in order to ensure maximum benefit to patients and minimum toxicity of proposed therapies. 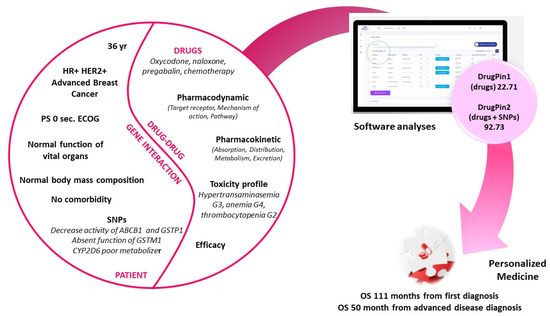 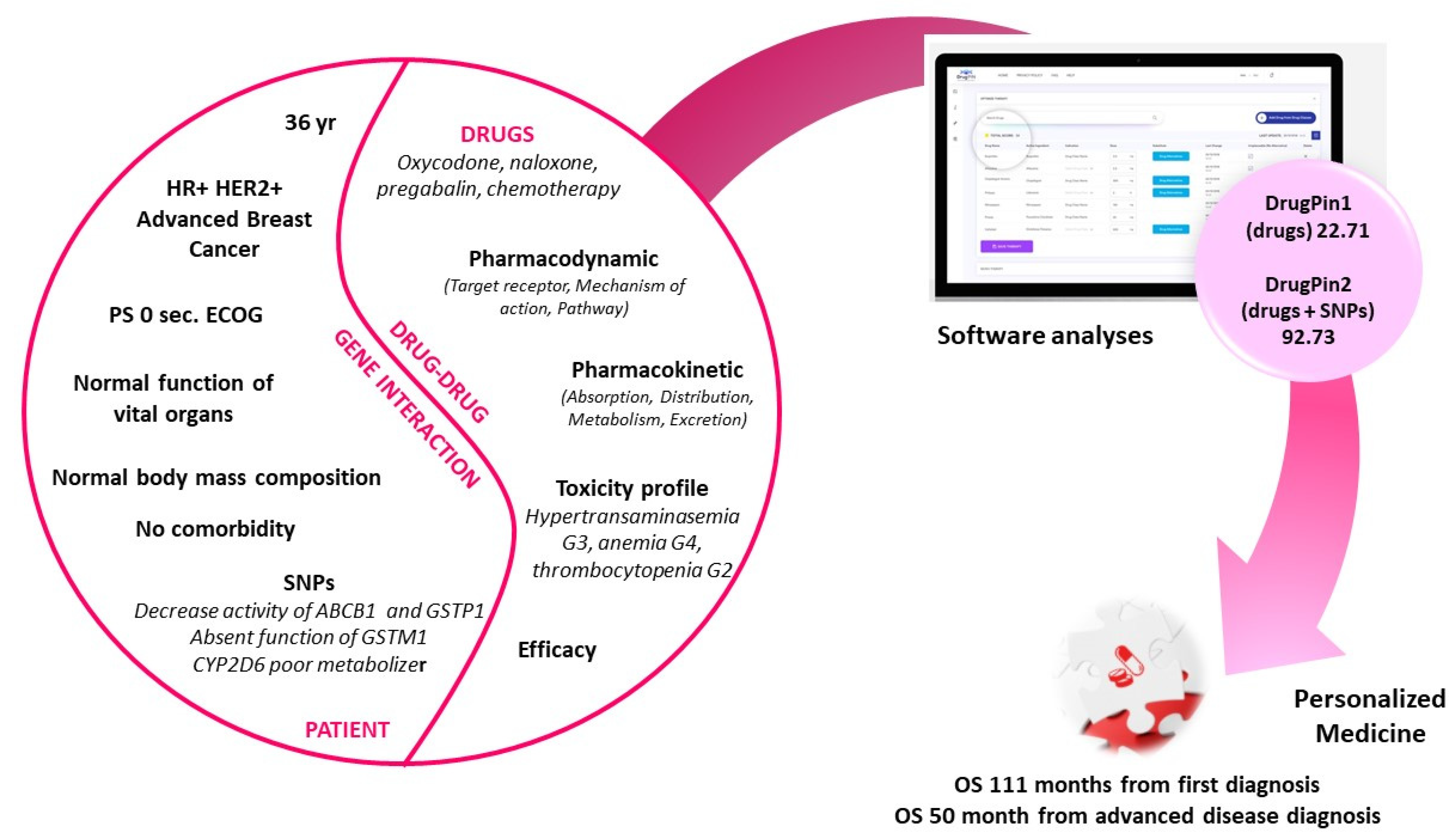 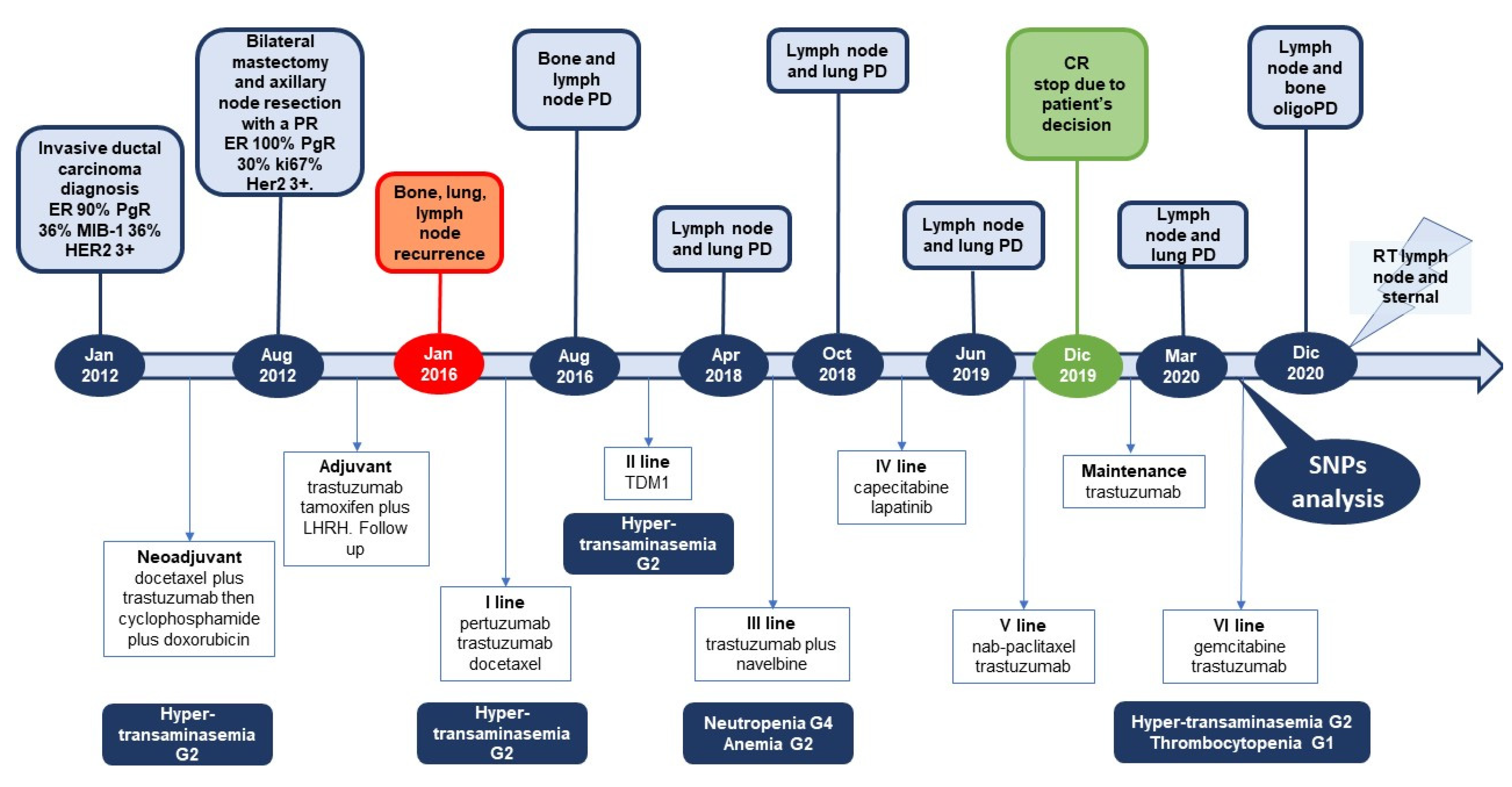