Stomach cancer remains one of the most common forms of cancer worldwide, accounting for about 9.9% of new cancers [1,2]. It represents the second leading cause of cancer death worldwide and is the fourth most common malignancy in the world [3]. Surgery is the main curative therapy; nevertheless, substantial numbers of patients with localized cancer develop recurrence following curative surgery alone. The 5-year survival rate for surgically resected stage IIB disease is below 35% and even lower for more advanced-stage disease [1,2]. Recurrence after surgery is usually incurable and efforts have been made to improve survival by the addition of adjuvant or neoadjuvant therapy. Some of the relatively modern trials involve the use of adjuvant or perioperative therapy. The landmark U.S. Intergroup (INT-0116) study and the United Kingdom Medical Council Adjuvant Gastric Infusional Chemotherapy (MAGIC) trials demonstrated that adjuvant chemoradiotherapy or perioperative chemotherapy (PC) decreases the relapse rate and improves the survival of patients with stomach cancer, respectively [4,5].
The INT-0116 study (adjuvant chemoradiation therapy versus observation after curative gastric cancer resection) was first reported in 2001. It randomized a total of 556 patients with stage IB to IVM0 operable stomach and gastroesophageal (GE) junction cancers to postoperative adjuvant chemotherapy vs. surgery alone. The postoperative adjuvant group had a median overall survival (OS) of 36 months compared to 27 months in the surgery only group (hazard ratio (HR) for death, 1.35 [95% confidence interval (CI), 1.09 to 1.66; p = 0.005]) [4]. This trial established postoperative chemoradiotherapy (PCR) as a standard approach for completely resected stage IB to IVM0 gastric and GE junction cancer. This approach was widely adopted in North America.
In 2006, the MAGIC (Preoperative chemotherapy versus surgery alone for resectable gastroesophageal cancer) trial by the Medical Research Council in the UK was reported. This trial enrolled 503 patients with resectable stomach (74%), distal esophageal, or GE junction adenocarcinoma who were randomly assigned to surgery alone or surgery plus PC (three preoperative and three postoperative cycles of epirubicin, cisplatin and 5-flurouracil). When compared with the surgery group, the PC group had a higher likelihood of OS (HR, 0.75; 95% CI, 0.60 to 0.93; p = 0.009; 5-year survival rate, 36% vs. 23%) and of progression-free survival (HR, 0.66; 95% CI, 0.53 to 0.81; p < 0.001) [5]. Because of the results of this trial, PC also became a standard of care and was widely adopted in Europe.
These two trials have established either PCR or PC as standard adjuvant therapy for operable stomach cancer. Several other studies have evaluated preoperative chemotherapy with variable results [6,7,8]. A meta-analysis of 12 trials involving 1820 patients that evaluated various preoperative chemotherapy regimens with surgery alone concluded that preoperative chemotherapy was associated with significant improvement in both disease-free survival (odd ratio (OR) 1.85, 95% CI 1.39−2.46) and OS (OR 1.32, 95% CI 1.07−1.64) [9]. Likewise, several randomized trials investigated various postoperative chemotherapy regimens with or without radiation with inconsistent results [10,11,12,13,14]. An individual patient data meta-analysis from 17 trials involving 3838 patients with a median follow-up exceeding seven years demonstrated that adjuvant chemotherapy was associated with a significant benefit in terms of OS (HR, 0.82; 95% CI, 0.76−0.90; p < 0.001) and disease-free survival (HR, 0.82; 95% CI, 0.75−0.90; p < 0.001) [15]. Another meta-analysis of six randomized controlled trials involving 1171 patients compared adjuvant chemoradiotherapy to chemotherapy [16]. While chemoradiotherapy was associated with a significantly better disease-free survival rate (OR 1.56, 95% CI 1.09−2.24), the survival benefit was not significant (OR 1.32, 95% CI 0.92−1.99). A recent study using U.S. databases suggests that neoadjuvant and perioperative chemotherapy may confer a survival advantage over postoperative treatment [17]; the results have not been confirmed by other studies.
Taken together, it is not known whether the two standard approaches in the management of operable stomach cancer are comparable or if one approach is more effective than the other. There are no randomized trials comparing the two approaches. Moreover, there is limited knowledge about the effectiveness of these two strategies in real-world patients. Despite this, the current trends have led to a greater adoption of PC, especially since the publication of the FLOT (fluorouracil plus leucovorin, oxaliplatin and docetaxel)-4 study [18].
The aim of the current study was to compare the survival of patients with operable stomach cancer who were treated with either PC or PCR as standard adjuvant therapy in Saskatchewan and to determine factors that correlated with survival. We hypothesize that PC improves the outcomes of real-world patients with operable stomach cancer compared to PCR. We also aimed to identify factors that correlated with survival in patients with operable stomach cancer.

This was a retrospective population-based cohort study. The study population was comprised of patients with operable stomach cancer diagnosed between January 2005 and December 2015 in the province of Saskatchewan, Canada. International Classification of Disease (ICD) codes relevant for stomach and GE junction cancers were used to identify eligible patients using the Saskatchewan Cancer Registry. Patients with other histological diagnoses, including lymphoma, neuroendocrine tumor, small cell cancer, melanoma and hepatocellular cancer, or with another active secondary malignancy, were excluded. In addition, patients who were treated with preoperative chemoradiotherapy or adjuvant chemotherapy alone were excluded. A pre-specified abstraction sheet was used for data collection. Clinical stage was based on baseline staging imaging scans. All medical records were reviewed and abstracted by a trained research associate. Due to the retrospective nature of the data, only moderate to severe toxicities documented in the health records of patients were recorded.
Based on type of treatment patients were divided into two groups—those who received PC and those who received PCR. PC was mostly comprised of combination chemotherapy that was administered for three cycles preoperatively and three cycles postoperatively. Each 3-week cycle consisted of epirubicin (50 mg/m2) by intravenous bolus on day 1, cisplatin (60 mg/m2) or oxaliplatin (130 mg/m2) intravenously with hydration on day 1, and fluorouracil (200 mg/m2) daily for 21 days by continuous intravenous infusion or capecitabine 625 mg/m2/day per oral twice per day (PO BID). PCR was comprised of one cycle of FU (425 mg/m2 per day) and leucovorin (20 mg/m2 per day) daily for five days then one month later 45 Gy (1.8 Gy per day) of radiation with FU (400 mg/m2 per day) and leucovorin (20 mg/m2 per day) on days 1 through 4 and on the last three days of RT or capecitabine (825 mg/m2 PO BID) continuously during radiation. One month after completion of radiation two more five-day cycles of chemotherapy (FU) 425 mg/m2 per day and leucovorin 20 mg/m2 per day) were given at monthly intervals.
During the study period both PC and PCR were accepted standard of care treatments. Not all cases were reviewed at a multidisciplinary tumor round. Based on various patients and tumor related factors such as age, underlying cardiovascular disease, or major bleeding, PC or PCR was selected by the treating physicians. All patients who were diagnosed with stomach cancer in Saskatchewan were seen at the two major cancer centers. Patients were followed up at the cancer center after completion of treatment and those who were in remission were subsequently discharged to their primary care physicians. Patients who developed recurrent disease were reassessed for palliative therapy. Survival data was collected from patient’s medical records and the Saskatchewan Cancer Registry.

Analysis of Primary and Secondary Endpoints

The survivals of the entire cohort and subgroups were estimated by using the Kaplan-Meier method. The survival distribution of different groups was compared by the log rank test. Cox proportional multivariate analysis was performed to determine the prognostic significance of second-line therapy. The HR and its 95% CI were estimated. The following variables were examined with respect to their prognostic significance: age (<65 vs. ≥65); gender; major comorbid illness per the Charlson Comorbidity Index; World Health Organization (WHO) performance status (<1 vs. ≥1); marital status (married or common-law partners vs. single or widowed); children; residence (urban vs. rural); smoking status; cancer center; treatment type (perioperative vs. postoperative chemoradiotherapy); median neutrophil to lymphocyte ratio (NLR); residence; node status (node positive vs. node negative); stage; time period (2005–2010 vs. 2011−2015); and grade (3 or 1 and 2).
All variables with p < 0.05 on univariate analysis or which were biologically important were examined in a multivariate model to assess their correlation with survival. The likelihood ratio test and t-test were used to determine whether the addition of independent variables of interest significantly added to the prediction of survival in the model. Tests for interaction and confounding factors were assessed for important variables. All p-values were two-sided. A p-value of <0.05 was considered statistically significant.

The study was approved by the University of Saskatchewan Ethics Board “Bio-261 The University of Saskatchewan Biomedical Research Ethics Board (Bio-REB) has reviewed the above-named research study. The study was found to be acceptable on scientific and ethical grounds. The principal investigator has the responsibility for any other administrative or regulatory approvals that may pertain to this research study, and for ensuring that the authorized research is carried out according to governing law. This approval is valid for the specified period provided there is no change to the approved protocol or consent process”.

All procedures performed in studies involving human participants were in accordance with the ethical standards of the institutional and/or national research committee and with the 1964 Helsinki declaration and its later amendments or comparable ethical standards. The University of Saskatchewan’s Biomedical Research Ethic Board approved the study and waived informed consent.

Due to privacy and confidentially data is not available. Part of the data was presented at the European Society of Medical Oncology (ESMO) Annual virtual meeting in September, 2020.

We thank Saskatchewan Cancer Agency and its Data Access Committee for providing support for this research.

No author has any conflict of interest to report. 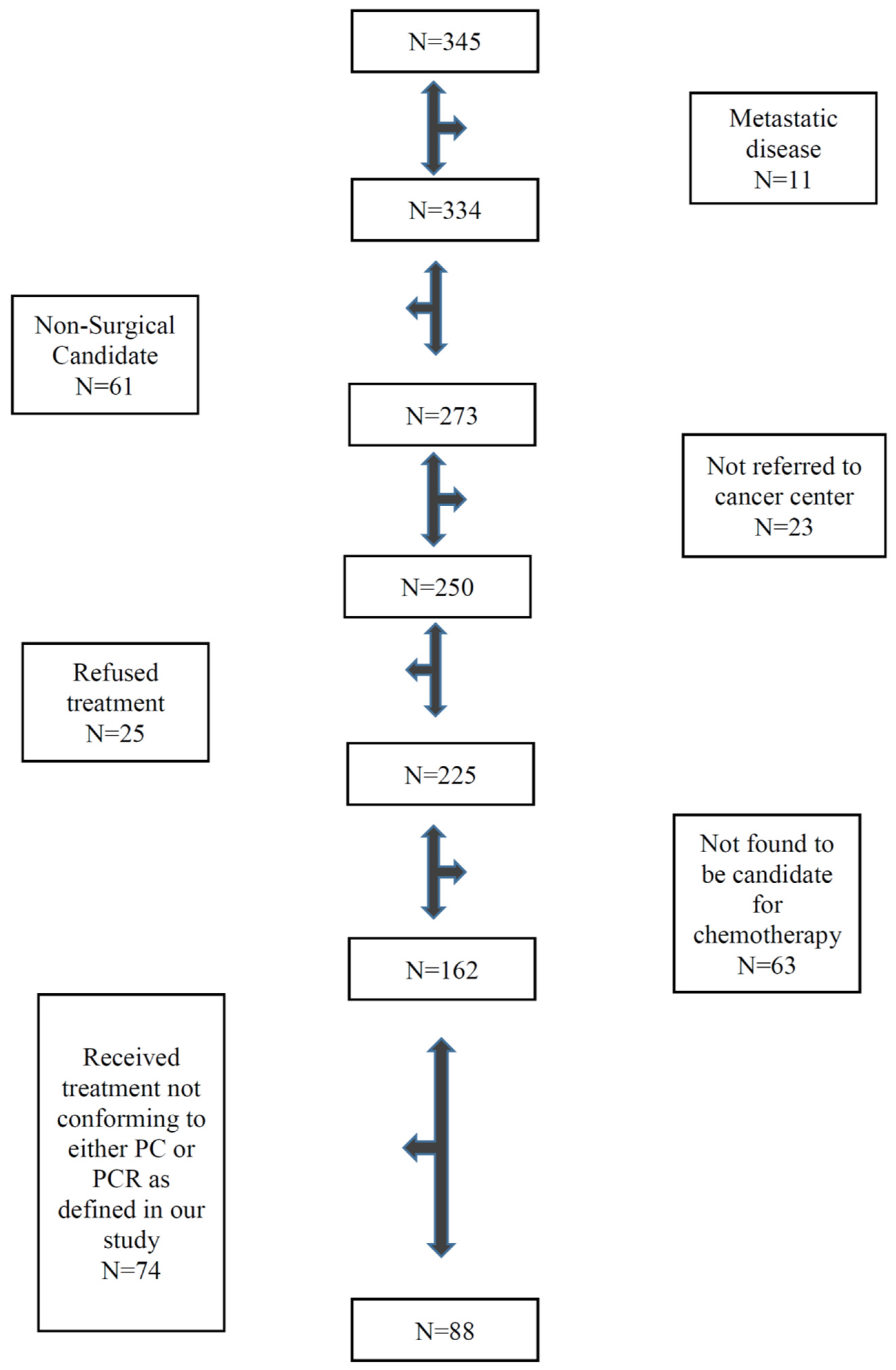 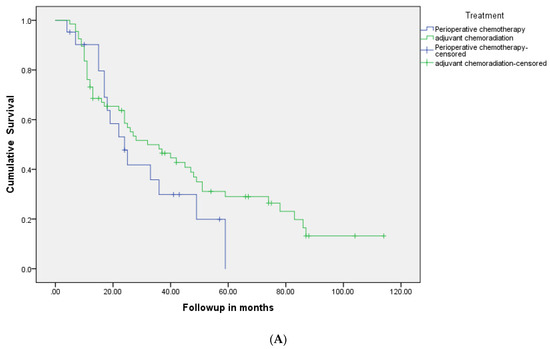 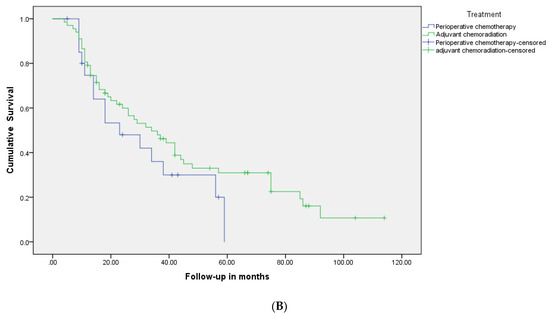 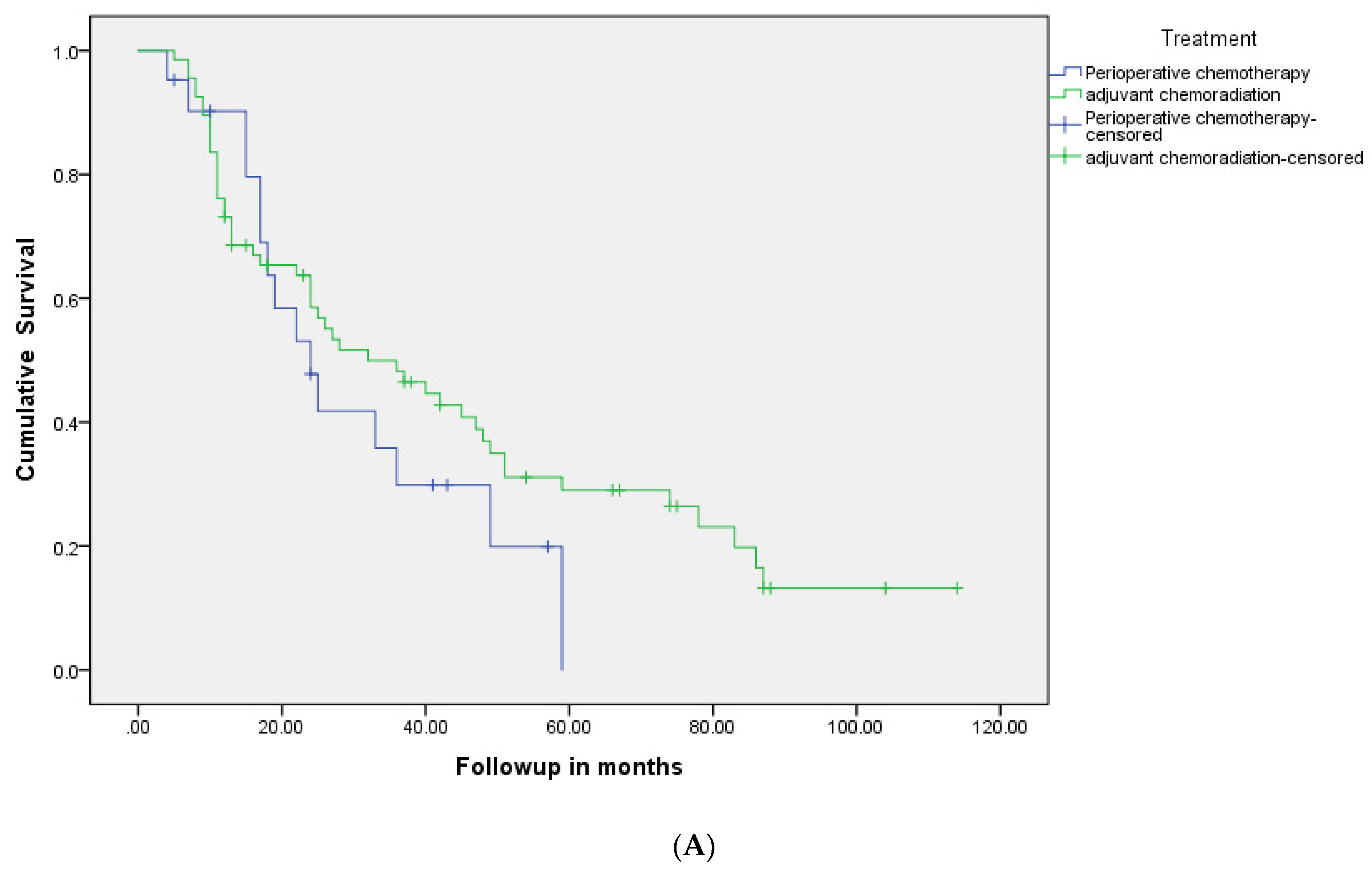 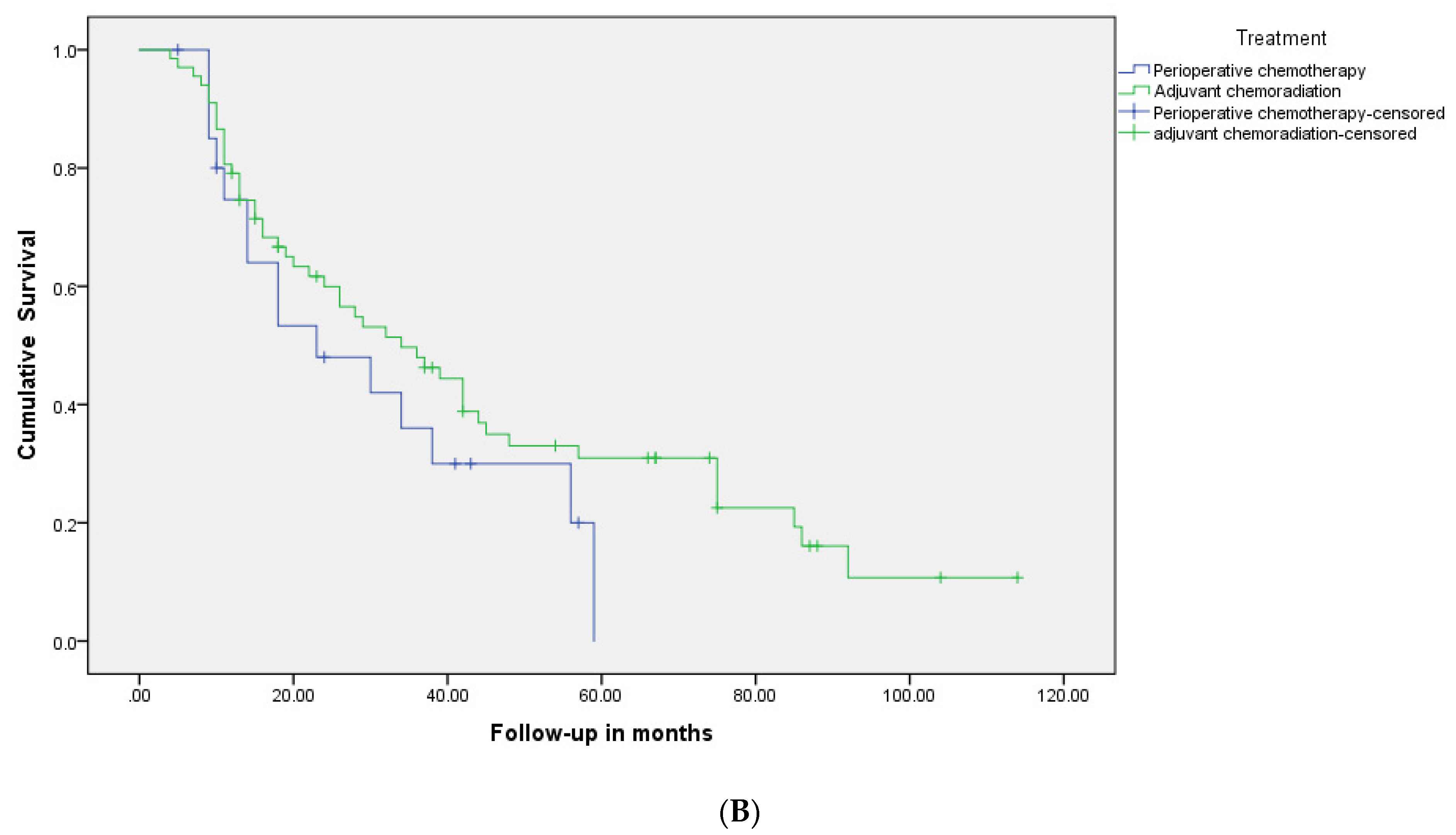