Emotional Suppression and Psychological Well-Being in Marriage: The Role of Regulatory Focus and Spousal Behavior
Next Article in Special Issue

Various comorbidities and multimorbidity frequently occur in chronic obstructive pulmonary disease (COPD), leading to the overload of health care systems and increased mortality. We aimed to assess the impact of COPD on the probability and clustering of comorbidities. The cross-sectional analysis of the nationwide Lithuanian database was performed based on the entries of the codes of chronic diseases. COPD was defined on the code J44.8 entry and six-month consumption of bronchodilators. Descriptive statistics and odds ratios (ORs) for associations and agglomerative hierarchical clustering were carried out. 321,297 patients aged 40–79 years were included; 4834 of them had COPD. A significantly higher prevalence of cardiovascular diseases (CVD), lung cancer, kidney diseases, and the association of COPD with six-fold higher odds of lung cancer (OR 6.66; p < 0.0001), a two-fold of heart failure (OR 2.61; p < 0.0001), and CVD (OR 1.83; p < 0.0001) was found. Six clusters in COPD males and five in females were pointed out, in patients without COPD—five and four clusters accordingly. The most prevalent cardiovascular cluster had no significant difference according to sex or COPD presence, but a different linkage of dyslipidemia was found. The study raises the need to elaborate adjusted multimorbidity case management and screening tools enabling better outcomes. View Full-Text
Keywords: COPD; comorbidities; multimorbidity; clusters COPD; comorbidities; multimorbidity; clusters
►▼ Show Figures 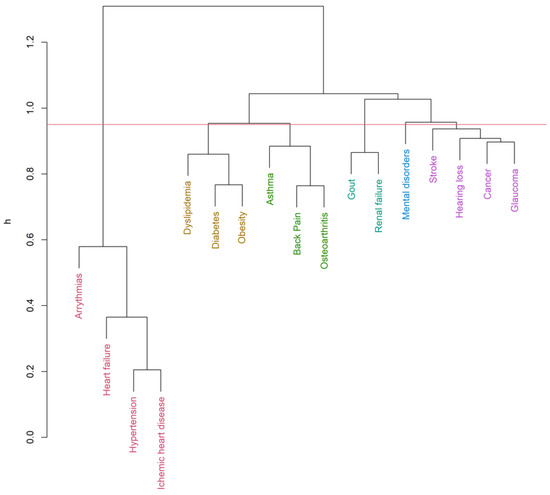