Changing Attitudes towards Occupational Medicine with Blended Learning Methods Is Possible among Medical Students in Spain: A Longitudinal Study

A Model to Estimate the Effect of International Traffic on Malaria Cases: The Case of Japan from 1999 to 2021

A longitudinal analysis of malaria cases as well as entries for Japanese and foreigners was conducted using data between 5 April 1999 and 30 September 2021 in Japan.
Monthly data of entries for Japanese and foreigners were obtained from Statistics on Legal Migrants. The statistics on international migration are compiled monthly and annually by the Immigration Services Agency of Japan based on reports submitted by Regional Immigration Services Bureaus and their branches and report the number of all entries crossing international borders of Japan (i.e., airports and seaports). Japanese was defined as “a person with Japanese nationality”, and foreigner was defined as “a person without Japanese nationality” who was not “a person under the agreement” in this article. “A person under the agreement” is defined as “the foreign military forces, military civilian and their families who entered into or departed from Japan by civilian ships or aircrafts under the agreements relating to the status of U.S. and U.N. military forces stationed in Japan” in Statistics on Legal Migrants.
Weekly data of malaria cases were obtained from reports by the National Institute of Infectious Diseases and the Ministry of Health, Labour and Welfare (MHLW). In Japan, medical doctors who diagnosed malaria must “file a notification with the prefectural governor via the chief of the nearest public health center immediately”, and the statistics of the infectious diseases are compiled weekly and annually by the National Institute of Infectious Diseases and the MHLW under the legal framework of the Act on the Prevention of Infectious Diseases and Medical Care for Patients with Infectious Diseases, namely the Infectious Diseases Control Act as of April 1999 [20]. Under the Infectious Diseases Control Act, malaria is defined as “disease caused by single infection or mixed infection of protozoans of the Plasmodium species such as Plasmodium vivax, Plasmodium falciparum, Plasmodium malariae and Plasmodium ovale” [20].
The population in Japan was obtained from Population estimates by the Statistics Bureau of Japan for the population as of the first day of each month and linearly imputed for daily data.
In this study, publicly available data were used from websites and published reports. As these publicly available data were anonymized, informed consent was not required.

Crude and multivariable risk ratios (RRs) and 95% confidence intervals (95%CIs) were calculated with a Poison regression model adjusted for time trend (year) and seasonality (month), as a predictive model of malaria cases per capita by the number of entries for Japanese and foreigners, using daily data from 5 April 1999 to 30 September 2021. Daily data were calculated using weekly data of malaria cases and monthly data of entries as uniform in each range. As the global reduction of malaria cases [21] may affect the number of imported malaria cases in Japan, time trend (year) was included as a potential confounding factor in the multivariable Poison regression model. Similarly, seasonality (month) was also included as a potential confounding factor.
These RRs and 95%CIs were calculated in the two models. The first model included the number of entries for Japanese and for foreigners separately (Model 1), and the second model included both (Model 2). Whereas the presence of multicollinearity does not affect the efficiency of extrapolating the fitted model [22], the variance inflation factors (VIF) of these predictive variables were calculated to diagnose the multicollinearity [23]. VIFs above 5 were considered as the presence of multicollinearity [23]. This point of cutoff for VIFs is usually used for the diagnosis of multicollinearity, and VIFs above 5 mean that the R2 is 0.8 and above. When the R2 is 1, it means perfect collinearity [22,23].
Because both entries and malaria cases were largely reduced after 2020, this large reduction may affect the association of entries with malaria cases between 1999 and 2021. Therefore, RRs (95%CI) were also calculated after the exclusion of data after 2020 for sensitivity analysis.
As of the end of 2021, the number of malaria cases by gender prior to 2019 was publicly available. Therefore, a gender-specific analysis was also conducted using data prior to 2019.
A generalized regression model was used to examine the association of time trend (year) with the number of entries for Japanese and foreigners, adjusted for seasonality (month), using data up until 31 December 2019, to estimate the potentially reduced number of entries from 1 January 2020 to 30 September 2021. Because the number of entries of foreigners was increased from around 2012 by a national campaign based on the Tourism-based Country Promotion Act [24], a generalized regression model with multiple interaction terms of time trend [25] was used to examine the association with entries of foreigners. Statistics on Legal Migrants shows that the increased number of entries from around 2012 was caused by an increase of foreign tourists [9].
The potentially reduced number of malaria cases was estimated by the potentially reduced number of entries for Japanese and foreigners after 2020, using a multivariable Poison regression model. The 95% confidence limits for the potentially reduced number were calculated using the bootstrap method [26].
All statistical tests were 2-sided and conducted using SAS, version 9.4 (SAS Institute, Cary, NC, USA). P values below 0.05 were considered as statistically significant. 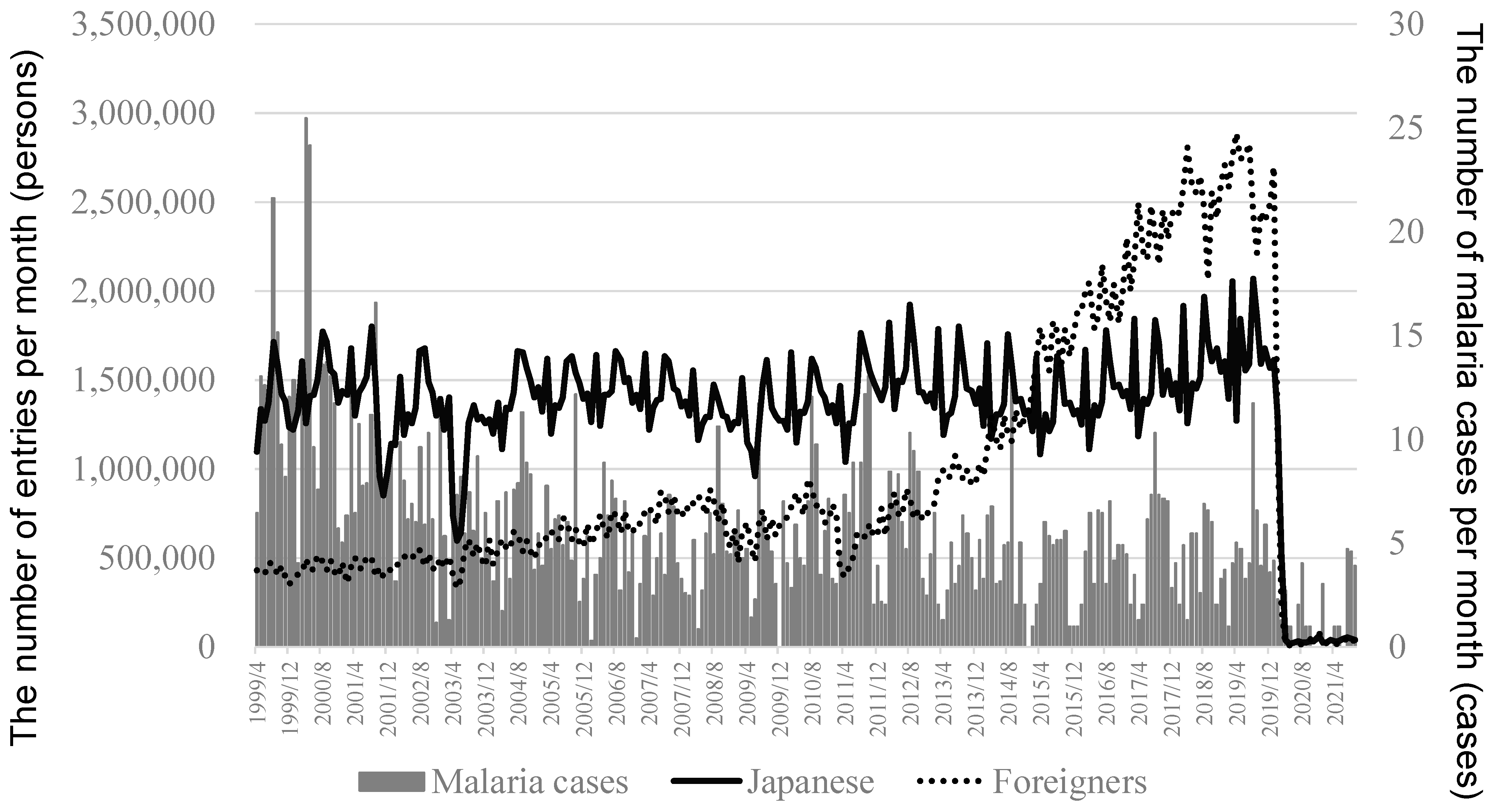 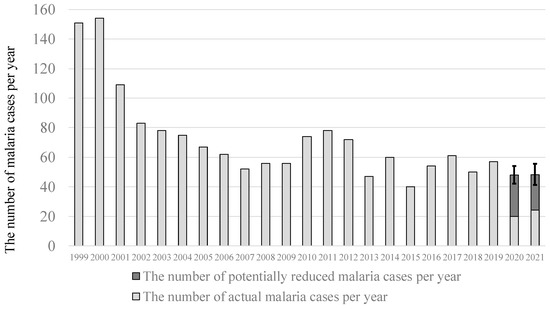