Mental, Physical and Socio-Economic Status of Adults Living in Spain during the Late Stages of the State of Emergency Caused by COVID-19
Previous Article in Journal

Shifting consumer behavior towards more sustainable diets can benefit environmental sustainability and human health. Although more frequent home cooking is associated with a better diet quality and fast-food consumption with worse diet quality, the environmental impact of diets based on frequency of cooking or eating fast food is not well understood. The objective of this study was to investigate whether the frequency of cooking dinner at home or eating fast food is associated with dietary greenhouse gas emissions (GHGE). We linked 24-h dietary recall data from adult respondents in the 2007–2010 National Health and Nutrition Examination Survey (NHANES) (N = 11,469) to a database of GHGE factors to obtain a measure of dietary GHGE (kgCO2-eq/2000 kcal) (the sum of emissions released in the production of food for an individual’s diet), adjusted by energy intake (kgCO2-eq/2000 kcal). We examined associations between frequency of cooking dinner (the only meal for which cooking frequency was measured), frequency of eating fast food, and dietary GHGE and protein sources (beef, pork, poultry, other meat, and fish and seafood (g/2000 kcal)) using generalized linearized regression models that controlled for age, sex, and other socio-economic characteristics. Greater cooking frequency was associated with higher dietary GHGE. In fully adjusted models, cooking 5–6 times/week was associated with an additional 0.058 kgCO2-eq/2000 kcal (SE 0.033) and cooking 7 times/week was associated with an additional 0.057 kgCO2-eq/2000 kcal (SE 0.027) when compared to cooking 0–2 times/week. Individuals in households who cooked dinner more frequently consumed significantly more meat, poultry, and fish (cooking 7 times/week: 148.7 g/2000 kcal vs. cooking 0–2 times/week: 135.4 g/2000 kcal, p-trend = 0.005), which could explain the association with a higher carbon footprint diet. There were few associations of note between fast-food frequency and GHGE. Policies and interventions that reduce consumption of meat and increase consumption of plants when both cooking meals at home and eating meals out are needed to shift toward diets that will be beneficial for both human health and the health of the planet. View Full-Text
Keywords: cooking; greenhouse gas emissions; sustainable diets; climate change; NHANES; dietary intake; dinner; meat cooking; greenhouse gas emissions; sustainable diets; climate change; NHANES; dietary intake; dinner; meat
►▼ Show Figures 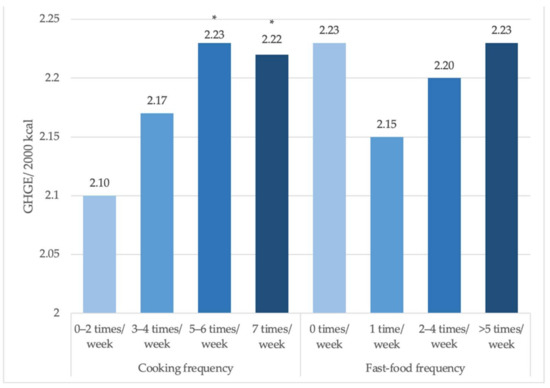