Exposure to PM2.5 and Obesity Prevalence in the Greater Mexico City Area
Next Article in Special Issue

Background: Bicycling has been associated with health benefits. Local and national authorities have been promoting bicycling as a tool to improve public health and the environment. Mexico is one of the largest Latin American countries, with high levels of sedentarism and non-communicable diseases. No previous studies have estimated the health impacts of Mexico’s national bicycling scenarios. Aim: Quantify the health impacts of Mexico urban bicycling scenarios. Methodology: Quantitative Health Impact Assessment, estimating health risks and benefits of bicycling scenarios in 51,718,756 adult urban inhabitants in Mexico (between 20 and 64 years old). Five bike scenarios were created based on current bike trends in Mexico. The number of premature deaths (increased or reduced) was estimated in relation to physical activity, road traffic fatalities, and air pollution. Input data were collected from national publicly available data sources from transport, environment, health and population reports, and surveys, in addition to scientific literature. Results: We estimated that nine premature deaths are prevented each year among urban populations in Mexico on the current car-bike substitution and trip levels (1% of bike trips), with an annual health economic benefit of US $1,897,920. If Mexico achieves similar trip levels to those reported in The Netherlands (27% of bike trips), 217 premature deaths could be saved annually, with an economic impact of US $45,760,960. In all bicycling scenarios assessed in Mexico, physical activity’s health benefits outweighed the health risks related to traffic fatalities and air pollution exposure. Conclusion: The study found that bicycling promotion in Mexico would provide important health benefits. The benefits of physical activity outweigh the risk from traffic fatalities and air pollution exposure in bicyclists. At the national level, Mexico could consider using sustainable transport policies as a tool to promote public health. Specifically, the support of active transportation through bicycling and urban design improvements could encourage physical activity and its health co-benefits. View Full-Text
Keywords: bicycling; transport; Mexico; health impact assessment; environmental health bicycling; transport; Mexico; health impact assessment; environmental health
►▼ Show Figures 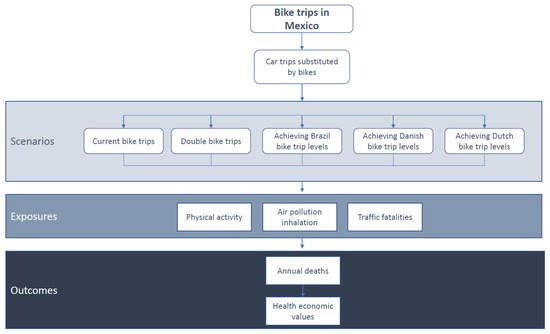 David Rojas-Rueda
Dr. David Rojas-Rueda's primary research focuses on promoting a healthy urban design, supporting mitigation, and adaptation to climate change. David is an environmental epidemiologist with over ten years of experience evaluating the health impacts of urban and transport planning policies, related to air pollution, traffic noise, green spaces, heat island effects, physical activity, and traffic accidents. He has worked in several countries around Europe, Africa, Latin, and North America. David specializes in methods such as health impact assessment, populational risk assessment, the burden of disease, and citizen science. His research actively involves citizens, stakeholders, local and national authorities. He is also a member of the university’s Partnership of Air Quality, Climate, and Health (PACH). He has active collaborations with United Nations agencies, such as the World Health Organization (WHO), the Pan-American Health Organization (PAHO), and UN-Habitat.
Zoom | Orient | As Lines | As Sticks | As Cartoon | As Surface | Previous Scene | Next Scene
We use cookies on our website to ensure you get the best experience. Read more about our cookies here.
Accept
We have just recently launched a new version of our website. Help us to further improve by taking part in this short 5 minute survey here. here.
Never show this again