Active school transport (AST) is a source of daily physical activity uptake. However, AST seems to have decreased worldwide over recent decades. We aimed to examine recent trends in AST and associations with gender, age, family affluence, and time to school, using data from the Health Behaviour in School-Aged Children (HBSC) study collected in 2006, 2010, 2014, and 2018 in the Czech Republic, Norway, Scotland, and Wales. Data from 88,212 students (11, 13 and 15 years old) revealed stable patterns of AST from 2006 to 2018, apart from a decrease in the Czech Republic between 2006 and 2010. For survey waves combined, walking to and from school was most common in the Czech Republic (55%) and least common in Wales (30%). Cycling was only common in Norway (22%). AST differed by gender (Scotland and Wales), by age (Norway), and by family affluence (everywhere but Norway). In the Czech Republic, family affluence was associated with change over time in AST, and the effect of travel time on AST was stronger. The findings indicate that the decrease in AST could be levelling off in the countries considered here. Differential associations with sociodemographic factors and travel time should be considered in the development of strategies for AST. View Full-Text
Keywords: active school transport; trends; cross-national; HBSC; gender; age; SES active school transport; trends; cross-national; HBSC; gender; age; SES
►▼ Show Figures 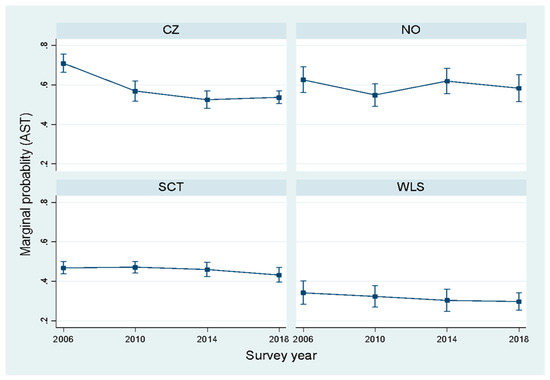