The Combined Effects of Fine Particulate Matter and Temperature on Preterm Birth in Seoul, 2010–2016
Previous Article in Journal

Is Short-Term Exposure to PM2.5 Relevant to Childhood Kawasaki Disease?

Background: Kawasaki disease (KD) is an acute febrile vascular disease of unknown cause that affects the whole body. KD typically occurs in infants under the age of five and is found mainly in East Asian countries. Few studies have reported on the relationship between the pollutant PM2.5 and KD, and the evidence remains irrelevant or insufficient. Objectives: We investigated the relationship between short-term exposure to PM2.5 and KD hospitalizations using data from Ewha Womans University Mokdong Hospital, 2006 to 2016. Methods: We obtained data from the hospital EMR (electronic medical records) system. We evaluated the relationship between short-term exposure to PM2.5 and KD hospitalizations using a case-crossover design. We considered exposures to PM2.5 two weeks before the date of KD hospitalization. We analyzed the data using a conditional logistic regression adjusted for temperature and humidity. The effect size was calculated as a 10 μg/m3 increase in PM2.5 concentration. We performed a subgroup analysis by sex, season, age group, and region. In the two-pollutants model, we adjusted SO2, NO2, CO, and O3, but the effect size did not change. Results: A total of 771 KD cases were included in this study. We did not find any statistically significant relationship between PM2.5 and children’s KD hospitalization (two-day moving average: odds ratio (OR) = 1.01, 95% confidence intervals (CI) = 0.95, 1.06; seven-day moving average: OR = 0.98, CI = 0.91, 1.06; 14-day moving average: OR = 0.93, CI = 0.82, 1.05). A subgroup analysis and two pollutant analysis also found no significant results. Conclusion: We did not find a statistically significant relationship between PM2.5 and children’s KD hospitalizations. More research is needed to clarify the association between air pollution, including PM2.5, and KD.
Keywords: PM2.5; children; Kawasaki disease; case-crossover design PM2.5; children; Kawasaki disease; case-crossover design

Kawasaki disease (KD), also known as Kawasaki syndrome, is an acute febrile illness of unknown cause that is primarily seen in children younger than five years of age. The disease was first described in Japan by Tomisaku Kawasaki in 1967 [1]. The first cases outside of Japan were reported in Hawaii in 1976 [2]. KD causes swelling in medium-sized arterial walls throughout the body, leading to bilateral bulbar conjunctival injection, cervical lymphadenopathy, changes in extremities, including erythema and induration, polymorphous rash, and changes in the lips and oral mucosa, including erythema, cracking, and strawberry tongue. The inflammation tends to affect the coronary arteries, which supply blood to the heart muscle [3,4]. Most children recover from the disease within a few weeks, but in 15–30% of untreated cases, KD patients develop heart problems, including coronary artery aneurysms, arrhythmias, and heart failure [5].
The overall rate of KD incidence has been increasing in recent years, but the incidence is highest among children who live in East Asia or who are of Asian ancestry. East Asian children have a 10–15-fold higher risk of developing KD than Caucasian children. The incidence of KD in Japan is the highest (264.8 per 100,000 children), followed by Korea (132.4 per 100,000 children) and Taiwan (82.77 per 100,000 children) [6].
Although several theories have been proposed regarding the etiology of KD, including environmental toxin exposure, autoimmune pathogenesis, and infectious diseases, it remains unknown. KD seems to be multifactorial and may occur in genetically susceptible individuals with an aberrant immune response to certain environmental triggers. The known genetic factors do not explain why disease incidence has increased in recent years. Thus, epidemiological studies have focused on potential environmental risk factors.
The incidence of KD has a striking seasonal variation, with different patterns in several countries. Previous studies have suggested that windborne environmental factors may trigger the disease in genetically susceptible children. The results of one study conducted in Taiwan did not support a positive association between ozone exposure and KD occurrence [7], and a U.S. study had similar findings [8]. However, in Japan, Takashi and colleagues reported that prenatal exposure to particulate air pollution may be associated with an increased risk of KD occurrence in children aged 6 to 30 months [9]. Whether fine particulate matter (PM2.5) contributes to KD remains unclear owing to limited monitoring data. This study analyzed the association between PM2.5 and the hospitalization of KD in children in South Korea over 10 years (2006–2016).

We used the Electronic Medical Record (EMR) system hospitalization data of Ewha Womans University Mokdong Hospital. We obtained the raw data for a total of 3205 hospitalized KD cases from January of 2006 to December of 2016. The raw data included the patient’s sex, age, address, outpatient/inpatient records, prescriptions, and examination records. All KD patients have M30.3 codes (Mucocutaneous lymph node syndrome) based on the International Classification of Diseases code (ICD-10 code).
We used the following criteria to define KD patients: (1) duplicate data were deleted if the hospitalization date and discharge date were the same; (2) patients were excluded if they did not have an intravenous immunoglobulin (IVIG) injection prescribed; (3) the patient’s sex, age, and residence information was excluded if it was missing; (4) only children 10 years of age or younger were included; and (5) we limited the study area to three regions adjacent to the hospital (Seoul, Gyeonggi, and Incheon).
The study was reviewed and approved by the Ewha Womans University Seoul Hospital Institutional Review Board (IRB File No: SEUMC 2020-12-018-002).

PM2.5 measurements did not begin in South Korea until 2015. We used the estimated CMAQ (Community Multiscale Air Quality) PM2.5 data 2006–2016. CMAQ is the most widely used EPA-designed model in Korea. Due to a lack of information on PM2.5 concentrations before 2015, PM2.5 data were calculated by applying ground and phase observations and CMAQ modeling data. We used Weather Research Forecasting (WRF) version 3.6.1 (https://esrl.noaa.gov/gsd/wrfportal/WRFPortal.html) as input to the reanalyzed meteorological data to estimate exposure [10] and Sparse Matrix Operator Kernel Emissions version (SMOKE) version 3.1 (https://www.cmascenter.org/download/forms/step_1.cfm) as the emission-generation model. The modeling area of the chemical transport modeling system was set to a 27 km horizontal resolution (174 × 128 grids) in East Asia and a 9 km resolution (67 × 82 grids) in the Korean peninsula [11]. FNL (Final Operational Earth Analysis Data; NCEP, 2000), reanalysis data from the U.S. Oceanic and Atmospheric Administration (NOAA), was used as meteorological initial condition data. Our exposure data were based on observations and we interpolated the missing data. Therefore, our exposure data are a fusion of observational and simulated data. A description of the modeling process has been described in previous studies [11,12,13,14,15]. We estimated this data in the domestic administrative districts and calculated it as the average daily data. The CMAQ PM2.5 data were linked using administrative-district data based on the patients’ place of residence. A total of 37 administrative districts are linked (Seoul: 17, Gyeonggi: 14, Incheon: 6).
We also obtained air pollution monitoring data (https://www.airkorea.or.kr/web) for two-pollutant models. We collected data on five air pollutants (particulate matters (PM10), sulfur dioxide (SO2), nitrogen dioxide (NO2), carbon monoxide (CO), and ozone (O3). Monitoring stations are installed in multiple locations by region. We selected and linked the nearest monitoring station from the KD patient’s place of residence.
We used the daily average temperature and humidity data as covariates. These variables were obtained from the Korea Meteorological Administration (KMA). Since the temperature and humidity data are open by city, the daily mean temperature and humidity were linked to each patient’s residence cities (Seoul, Gyeonggi, Incheon).

To investigate the acute relationship between short-term exposure to PM2.5 and KD hospitalization, we considered the bi-directional time-stratification case-crossover design. In this design, the date settings for the control periods are the same year, month, and day of the weeks for the KD hospitalization date, but the weeks differ. Therefore, three or four controls can be assigned to one KD patient. In this study design, because each case or control periods is the same patient, personal characteristics such as sex and age are not considered in the short-term fluctuations. Instead, we considered weather variables as potential confounding factors (e.g., temperature and humidity).

We performed a conditional logistic regression to determine the relationship between PM2.5 exposure and KD hospitalization. This is an extended logistic regression method that accounts for several control periods. We calculated the odds ratio (OR) and confidence interval (CI) per 10-unit increases in PM2.5. To account for the effects of various exposure lag days, lag days were considered from the date of KD hospitalization (current day) up to two weeks ago. We considered both the single lag (lag 0 to lag 14) effects and the moving average (lag 0–1 to lag 0–14) effects. We suggest the moving average effect as the main analysis in this study.
We considered sex (boys/girls), season (warm season/cold season), age groups (<1, 1–4, 5–10), and region (Seoul/Gyeonggi/Incheon) in the sub-group analysis. The warm seasons include April-September, and the cold season includes January-March and October-December.
We calculated a Spearman’s correlation between air pollutants before considering the two-pollutants model. If the correlation coefficient between the two exposure variables is too high (more than 0.7), it was excluded from the analysis. In the two-pollutants model, PM2.5 is the main exposure and other air pollutants (SO2, NO2, CO, O3) were adjusted.
All the data preprocessing and statistical analysis were performed used R statistical software (Ver. 4.0.0 R development Core Team, Vienna, Austria). The significance level of alpha was 0.05.

A total of 771 KD cases were included in our research (Figure 1). Table 1 shows the areas where our study patients, including Seoul, Gyeonggi, and Incheon. The majority of participants live in Seoul. Detailed administrative areas for the study’s residential areas are presented in Table S1. Table 2 shows summary statistics of the exposure data during the period 2006–2016. We compared environmental exposure levels on case and control peropds using t-test. There was no difference in PM2.5 concentration between case periods and control periods. Figure S1 shows the average exposure concentration for the study area (each district) during the study period. The single-lag exposure effects from the current day (lag 0) to the day before the two-week mark (lag 14) are shown in Figure S2. The effect sizes appear to decrease as the delay grows longer. Table 3 shows the model results for the association between PM2.5 exposure and children’s KD hospitalizations. Figure 2 shows the effects of exposure to PM2.5 on the current day (Lag 0), two-, seven-, and 14-day moving average (Lag 0–2, Lag 0–6, Lag 0–13) age at KD hospitalization. We did not find any association between short-term exposure to PM2.5 and children’s KD hospitalization. Subgroup analysis also found no association.
Table S2 provides the summary statistics of the daily air pollution data measured by a monitoring station. The correlation between PM2.5 and other air pollutants is shown in Table S3. The correlation coefficients are as follows: PM10 [r: 0.92], SO2 [r: 0.51], NO2 [r: 0.52], CO [r: 0.56], and O3 [r: −0.07]. PM10 was excluded from the two-pollutant model due to its high correlation with PM2.5. We found no association between PM2.5 and children’s KD hospitalizations (Table 4) in the two-pollutant models.

In conclusion, we found no association between short-term PM2.5 exposure and KD occurrence in South Korea. Future research should compare KD cases between locations in different parts of the world with a larger sample size and incorporate statistical models that can determine associations between several environmental factors, ambient temperatures, and KD occurrence. Cooperative efforts are needed to elucidate KD’s underlying pathological mechanisms. Future research on the causal relationship of air pollution to KD is needed.

This study did not receive grants from any funding agencies in the public commercial, or not-for-profit sectors.

The study was approved by the Ewha Womans University Seoul Hospital Institutional Review Board (IRB File No: SEUMC 2020-12-018-002).

The study did not require informed consent statement. 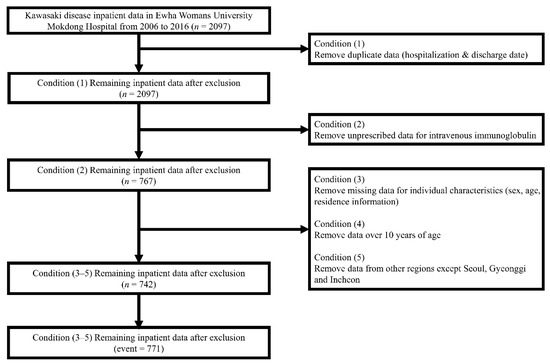 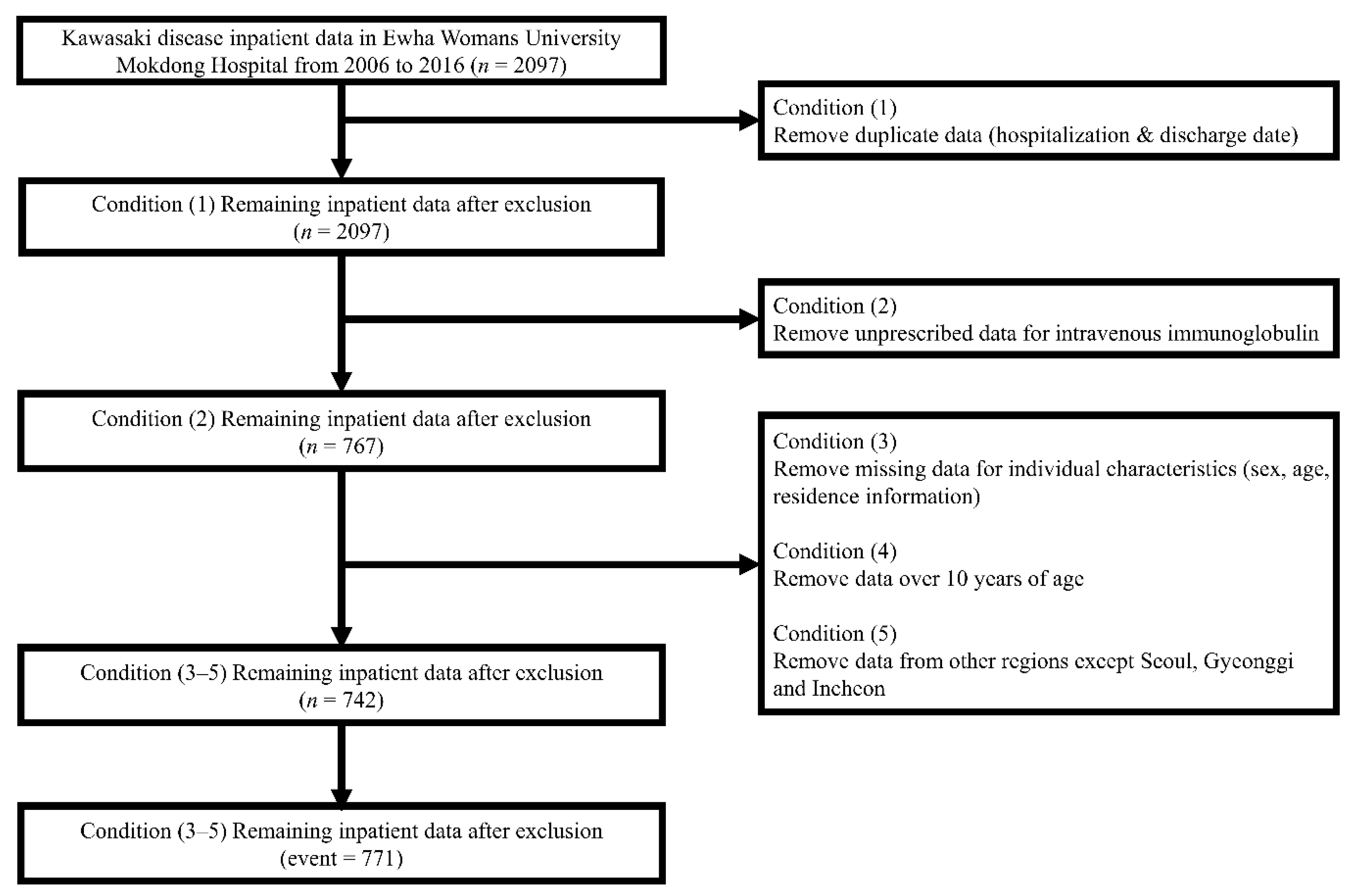 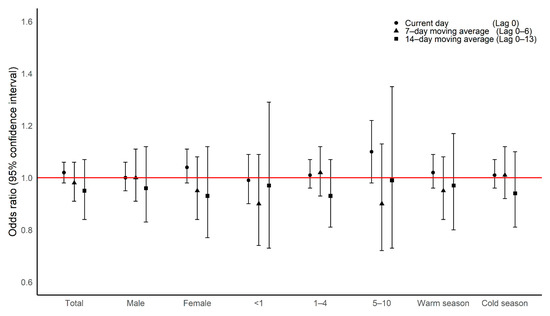 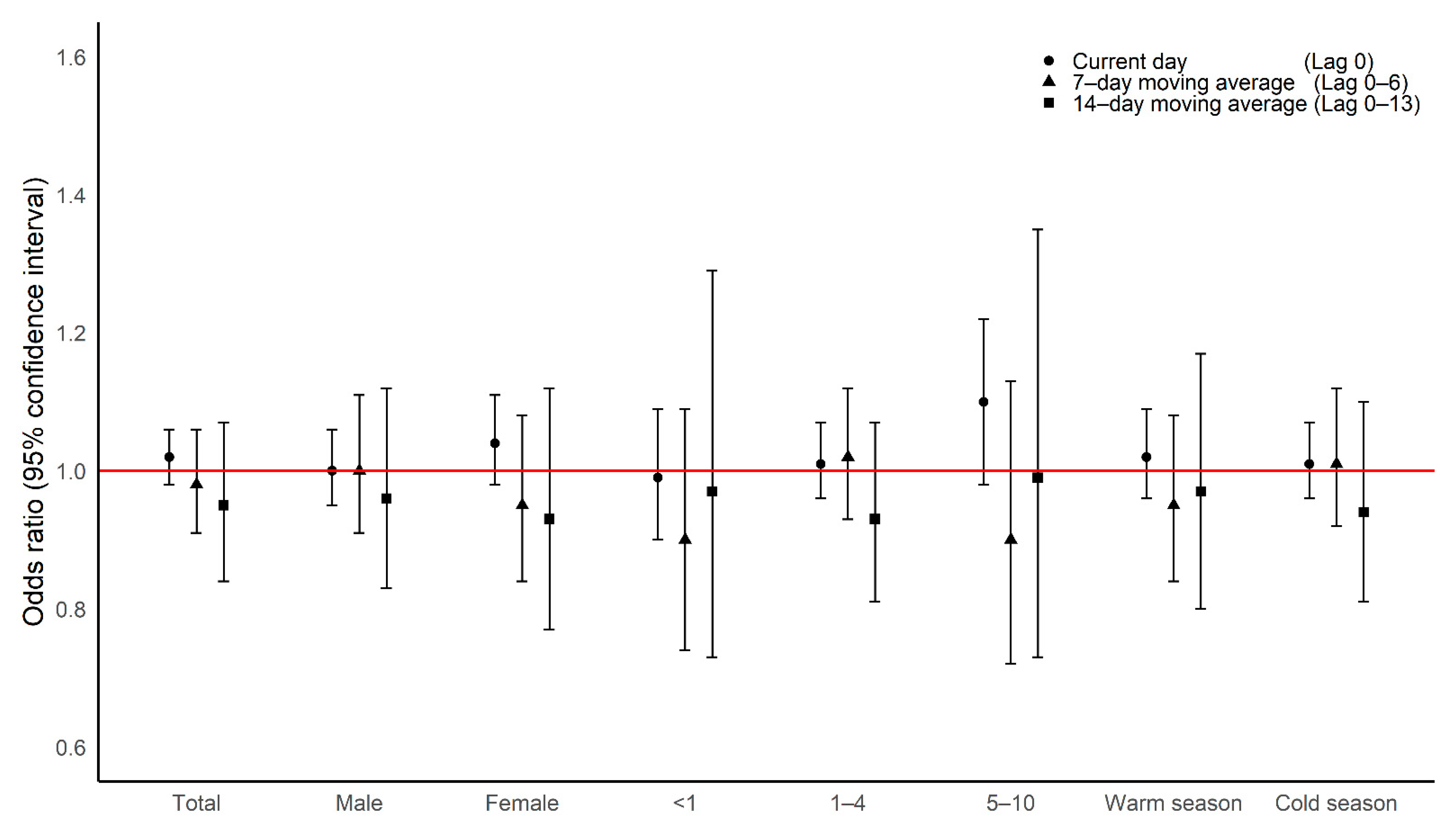