Epidemiologic Methods to Estimate Insufficient Sleep in the US Population

Poor sleep quality lessens general health quality and is related to physical and mental problems. Moreover, fatigue is one of the foremost common complaints in medical care and plays a role in the decreasing quality of life of the older population. For these reasons, the objective of this study was to examine the effect of high- and moderate-intensity interval training programs (HIIT vs. MIIT)—both consisting of twelve weeks of TRX training—on the sleep quality and fatigue levels of the elderly. A randomized controlled clinical trial (NCT03404830) was conducted. A total of 82 subjects were randomized to either a HIIT group (n = 28) that performed a main squat activity with a suspension system, comprising four four-minute intervals between 90–95% of the maximum heart rate (HR), an MIIT group (n = 27) with an intensity of 70% of the maximum HR, and a control group (CG) (n = 27) that continued their daily lifestyle. The two exercise groups trained twice a week for 12 weeks, with each session lasting 45 min. Sleep quality was measured using the Pittsburgh sleep quality index (PSQI), and fatigue was assessed using the fatigue severity scale (FSS). Outcomes were measured before the intervention and after the intervention period. Post-intervention sleep quality measurements revealed a statistically significant interaction regarding group × time (p < 0.005) and fatigue (p = 0.002). Specifically, fatigue decreased in the HIIT group between both measurement moments (p = 0.003). In addition, differences were obtained in the post-intervention measure between the HIIT and MIIT groups (p = 0.013) and HIIT and control (p = 0.029). Our analysis indicates that a population of the elderly showed improvements in sleep quality and fatigue after performing a high-intensity intervention using suspension training (TRX), with markedly better results in the HIIT group. View Full-Text
Keywords: HIIT; TRX; older adults; sleep quality; fatigue HIIT; TRX; older adults; sleep quality; fatigue
►▼ Show Figures 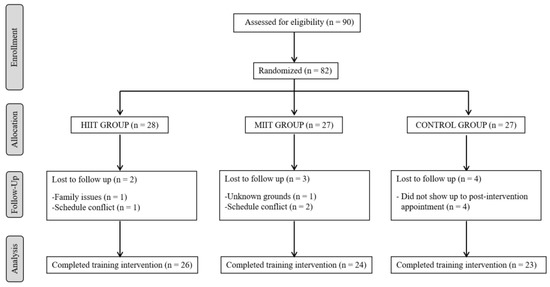