Effects of Diet Control and Telemedicine-Based Resistance Exercise Intervention on Patients with Obesity and Knee Osteoarthritis: A Randomized Control Trial

The number of overweight (OW) and obese (OB) children, adolescents, and adults has increased globally. Exercise intensity, both actual and perceived, is a significant factor in a variety of health-related investigations and rehabilitation trainings. Despite this, literature on the connection between actual exercise intensity and the rating of perceived exertion (RPE) in overweight and obese populations is lacking. A systematic review, meta-analysis, combined analysis of variance (Brown–Forsythe ANOVA), and Spearman correlation were performed to fill this gap. After preliminary assessments, ten studies were classified as having a low risk of bias and a degree of heterogeneity (I2 = 34%; p = 0.05). The RPE scores (F = 0.032; p = 0.859), physiological index (percentage of maximal heart rate (%HRmax) (F = 0.028; p = 0.869), and percentage of maximal oxygen uptake (%VO2max) (F = 2.434; p = 0.136) demonstrated consistency without being significantly different between the normal weight (NW) and OW/OB groups. The RPE scores varied by age (NW (coefficient values) = 0.677 ***, OW = 0.585 **), as well as by indoor temperature (OW only, coefficient values = 0.422 *), body mass index (NW (coefficient values) = 0.516 **, OW = 0.580 **), and test time (NW only, coefficient values = 0.451 *). We conclude that RPE is appropriate for the following OW and OB people: (1) those who are older than 21.5 (the lowest age in the group of ≥18) years old and younger than 58.6 (the highest age in the group of ≥18) years old, without any other diseases, and (2) those who engage in low-intensity exercise while maintaining a standard indoor temperature. Future studies may address alternative techniques for increasing the reliability of longitudinal comparisons and gender comparisons, as well as investigate other possible confounding factors. View Full-Text
Keywords: health-related quality of life; physiological needs; controlling behavior; exercise intensity; physical literacy health-related quality of life; physiological needs; controlling behavior; exercise intensity; physical literacy
►▼ Show Figures 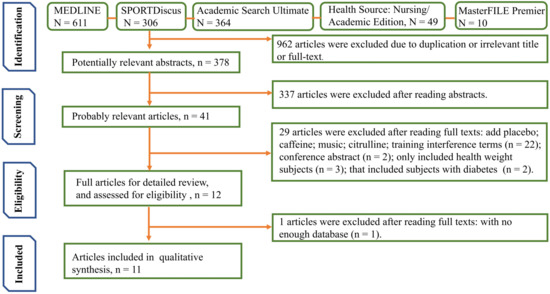 
Yu, Hongli, Chen Sun, Bo Sun, Xiaohui Chen, and Zhijun Tan. 2021. "Systematic Review and Meta-Analysis of the Relationship between Actual Exercise Intensity and Rating of Perceived Exertion in the Overweight and Obese Population" International Journal of Environmental Research and Public Health 18, no. 24: 12912. https://doi.org/10.3390/ijerph182412912