A 32-year-old Caucasian male, with normal body mass, with no significant medical history, not taking medication and not receiving treatment for chronic diseases, was admitted to a hospital emergency department due to a gradual increase in the mobility impairment of the right upper limb, resulting from a workplace incident, i.e., an injury to the right upper limb in the region of the cubital fossa several weeks before, as well as acute pain in the area of the injury and fever on the day of admission. Upon admission, the right upper limb was slightly larger in circumference than the left upper limb, with warmer, red skin, and compulsorily positioned, with a 90° contracture in the elbow joint. Increased CRP was found in laboratory tests, otherwise without significant deviations. Due to the overall clinical condition, a decision was made to supplement the diagnostics with computed tomography of the right upper limb in the vascular option.
Computed tomography angiography (CTA) of the right upper limb was performed in 5.0- and 0.5-mm layers. The examination showed a non-dilated aortic arch with an independent left vertebral artery ostium between the ostia of the left common carotid artery and the left subclavian artery (Figure 1). Moreover, non-dilated arterial vessels of the right upper limb were visualized—the brachiocephalic trunk, the right subclavian artery, the right axillary artery, the right brachial artery, and the arteries of the right forearm. At the level of the distal epiphysis of the right humerus, just before the division of the brachial artery into the arteries of the forearm, a leakage of the contrast agent beyond the lumen was found, consistent with active bleeding from the injured brachial artery (Figure 2). At this level, a layered soft tissue hematoma was visualized around the brachial artery with approximate dimensions of up to 7.0 cm × 5.9 cm in cross-section and 8.4 cm in the longitudinal dimension (Figure 3). Within the soft tissue hematoma, a high-density, metallic foreign body up to about 0.7 cm in cross-sectional dimensions was localized (Figure 4).
Based on the CTA examination of the right upper limb, a decision was made to perform an urgent vascular surgery. During the procedure, the hematoma of the cubital fossa was removed together with the metallic foreign body between the clots. The damaged brachial artery was reconstructed with the use of a fragment of the basilic vein. After the procedure, limb mobility was restored, and body temperature and inflammatory parameters normalized.

The described case concerns an upper limb injury that occurred in the workplace, with damage caused by a metallic foreign body to the brachial artery wall and subsequent formation of a soft tissue hematoma. The superinfection of the hematoma, because of the presence of a foreign body, resulted in the inflammation and exacerbation of the previously growing clinical symptoms.
Vascular injuries constitute a significant problem worldwide [1]. Nearly 90% of arterial injuries concern the vessels in the limbs, of which the arteries of the lower limbs are most often damaged in military operations, while in other cases (mainly road accidents), the vessels of the upper limbs are damaged more often. Extremity arterial injury is uncommon among civilian trauma patients, but notable for its potentially severe consequences, which include: pseudoaneurysm, arteriovenous fistulas, artery dissection, soft tissue hematoma, arterial embolism, acute limb ischemia, limb amputation, or hemorrhagic shock. Treatment is often complex due to the involvement of multiorgan system trauma, as well as concomitant local musculoskeletal injuries [2].
The importance of CTA in patients with arterial injuries was analyzed by Kelly et al. [3]. This study assessed whether CTA after physical examination changed the clinical care of patients with high energy lower limb injuries. In a group of 157 patients, it was shown that physical examination alone allows to obtain high sensitivity to vascular damage in lower limb injuries. CTA is useful for confirming and locating the source of acute vascular injury. In patients with suspected vascular injuries, a negative CTA result determines the possibility of discharge from the emergency department without further clinical observation.
Extensive tissue damage, most typical of gunshot wounds, is the optimal environment for the development of a bacterial infection. In cases of superinfected vascular injuries, it is necessary to make a tissue prosthesis after mobilizing both ends of the damaged vessel. The best method is an end-to-end anastomosis if possible. If not, a venous prosthesis can be used, because it has better indicators of patency and resistance to infections than synthetic prostheses [4]. In the study conducted by Zellweger et al., in which a three-year follow-up was carried out involving the effectiveness of treatment in 113 men and 11 women who suffered from a brachial artery injury because of a stab or gunshot wound, in approximately one-third of patients, it was possible to perform primary repair of the artery. In approximately two-thirds of patients, the use of a vein to join the ends of the damaged vessel was required [5].
Studies on the effectiveness of treatment of non-iatrogenic damage to the arteries of the limbs indicate good prognosis, assuming the performance of vascular surgery interventions. In a study conducted by Degiannis et al., one month after the end of hospitalization related to the treatment of non-iatrogenic limb artery injury, 95% of patients had a palpable pulse in the distal section in relation to the injury site. It was also observed that limb disability was more often associated with an injury which resulted in the coexistence of damage to the artery and peripheral nerves than in the case of isolated artery damage [6].
In a study conducted by Padayachy et al., in a retrospective evaluation lasting 5 years, 115 patients treated for a brachial artery injury were analyzed. Stab wounds were the most common cause of damage in this group of patients. Most of the injuries were treated with an inverted saphenous vein graft. The authors noticed that due to the good collateral circulation in the upper limb, most of these injuries do not require amputation, even when the treatment intervention is delayed [7]. In severe cases of brachial artery trauma (artery disruption, blood clot occluding the lumen of the artery, compression of the artery by a hematoma, bone fragment, or foreign body), the risk of amputation of part of or the entire damaged limb is real.

This research received no external funding. APC was funded by Wroclaw Medical University.

The manuscript contains a presentation of the description of diagnostic tests of a selected patient; the work does not describe a medical experiment—the opinion of the bioethics committee was not required. The patient gave his written consent to the examination and the use of the images by the researcher. 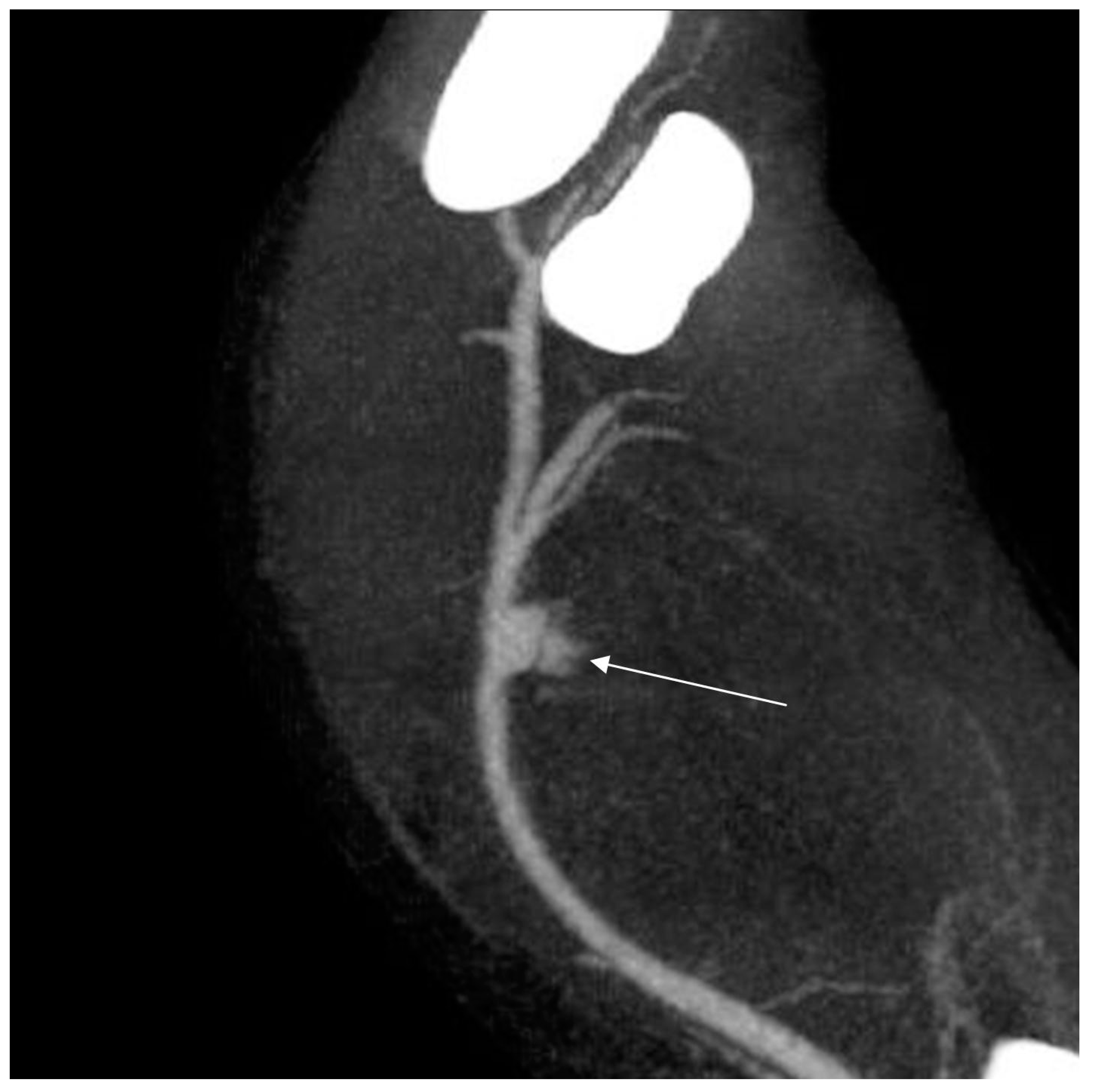 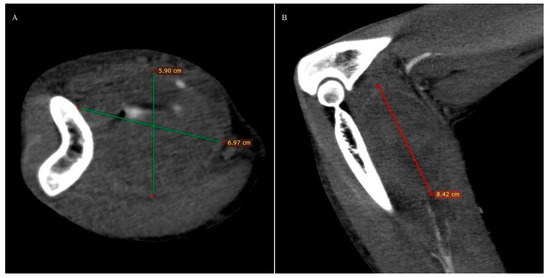 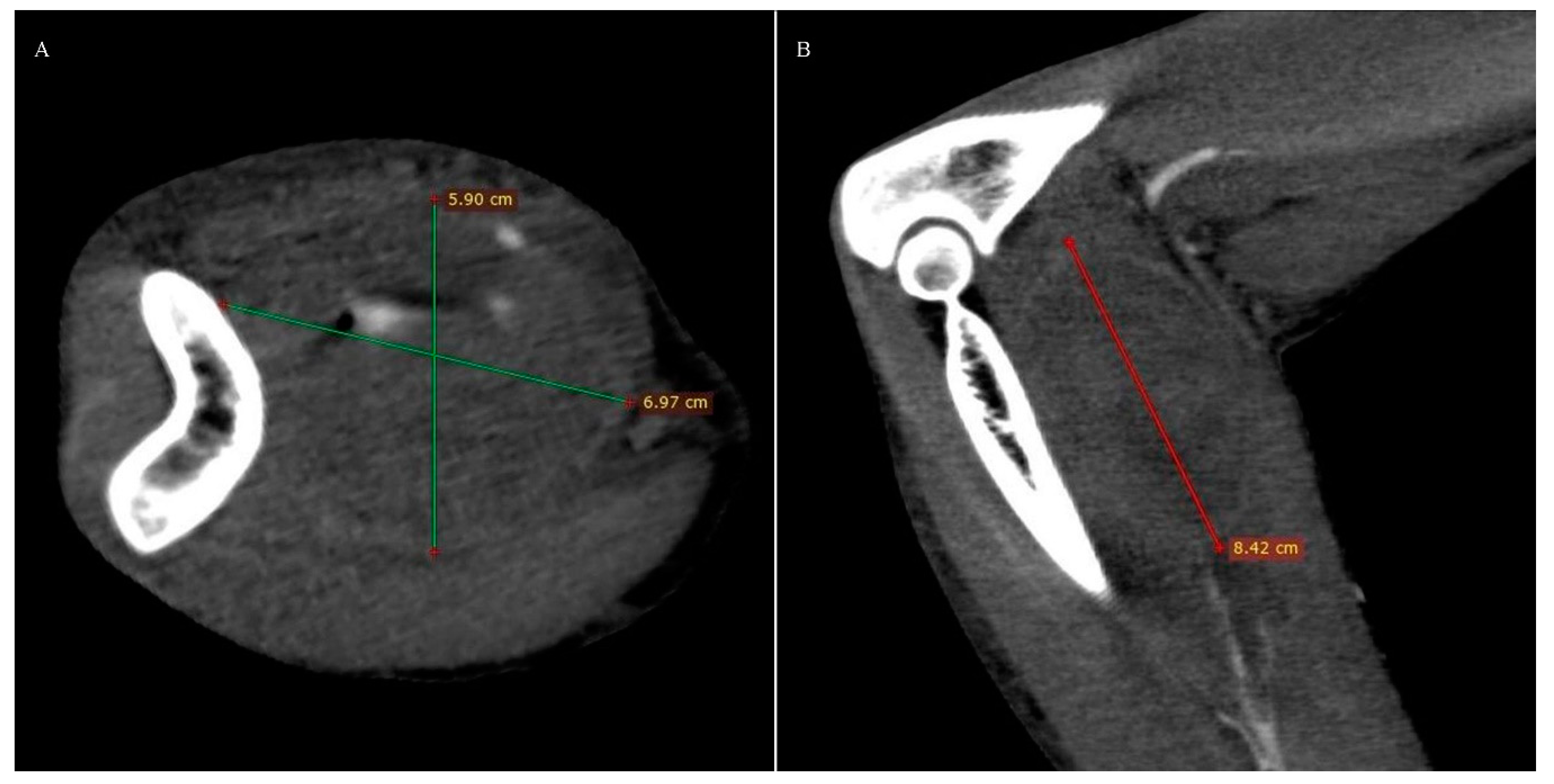