Effects of a Psychological Management Program on Subjective Happiness, Anger Control Ability, and Gratitude among Late Adolescent Males in Korea
Next Article in Special Issue

Benefits of Exercise on Influenza or Pneumonia in Older Adults: A Systematic Review

Aging-induced sarcopenia can cause immunosenescence and significantly impact the onset of metabolic diseases, including cardiovascular disease. In particular, the increased secretion of proinflammatory adipocytokines caused by sarcopenic obesity promotes muscle catabolism [1]. Skeletal muscle secretes various proteins, including growth factors, cytokines, and metallopeptidases, and muscle contraction during exercise training induces myogenesis by increasing the expression of myokines, muscle-derived molecules that mediate the “polypill” effect of exercise [2]. The secretion of myokines, which include angiopoietin-like 4, brain derived neurotrophic factor, fibroblast growth factor (FGF) 21, follistatin-like 1, interleukin (IL)-6, IL-7, IL-15, irisin, LIF interleukin 6 family cytokine (LIF), myonectin, myostatin, and vascular endothelial growth factor (VEGF), varies upon muscle contraction [3].
Along with increased myokine expression, muscle contraction during exercise triggers neovascularization through potent angiogenic factors, such as IL-8 and VEGF [4]. Myokine expression levels are a key indicator of immune function, and IL-8 is a major myokine [5] that facilitates angiogenesis through C-X-C motif chemokine receptor (CXCR) 2 signaling [6]. IL-8 is a chemokine that stimulates the recruitment of neutrophils, and the plasma IL-8 concentration increases during strenuous exercise, such as sprinting and eccentric muscle contraction exercises [7]. IL-8 secretion from muscles stimulates neovascularization, and in humans, it imparts its chemokine effects through CXCR1 signaling in microvascular endothelial cells and neovascularization through CXCR2 [8]. CXCR2 is highly expressed in muscle fibers and vascular endothelial cells and displays increased expression in muscle biopsy samples after concentric exercise, suggesting a key role in neovascularization [5]. IL-7 strengthens immune function in two ways: by stimulating T cell production in the thymus, and by enhancing T cell development. In cancer and metabolic diseases, increased IL-7 levels stimulate T cell production in the presence of reduced CD4+ T cells due to weakening of the autoimmune system [9]. IL-7 is produced in the stromal cells of lymphoid organs, mainly in the thymus in rats [10], and in the spleen in humans [11]. IL-7 production likely occurs at a constant rate, as it has been suggested that circulating IL-7 concentration in the body is regulated by modulating its binding to IL-7 receptors rather than its production [12]. However, IL-7 secretion in the livers of mice is associated with an acute response that facilitates increases in naive and memory CD4+ and CD8+ T cells [13], in particular, IL-7 has been reported as a novel marker associated with muscle fiber hypertrophy after resistance exercise [14]. Therefore it is expected that it will have a positive effect even after combined exercise training of resistance and aerobic exercise in high fat diet (HFD) induced obese subjects. It is considered that there is a need to confirm these effects more accurately.
IL-6 has been suggested as one of the representative myokine of muscle in relation to the positive effects of chronic disease prevention, including anti-inflammatory effect and efficient insulin action by exercise training. However, IL-6 is reported as a positive factor in relation to muscle hypertrophy [15] and metabolic function activation [16], whereas the result does not show any change in blood IL-6 concentration [17] and an insignificant expression level of mRNA of IL-6 in muscle [14] after exercise training. Therefore, it is considered that detailed confirmation of IL-6 expression in muscle is required after exercise training in high-fat diet induced obese subjects.
While exercise has important pro- and anti-inflammatory effects [2], its effects on the levels of various myokines associated with the prevention of obesity and aging remain unclear. Accordingly, we examined the effects of a combined 12-week exercise training program consisting of aerobic and resistance exercise on aging rats with high fat diet-induced obesity on skeletal muscle myokines expression. The results suggest that exercise training is a promising treatment to reduce inflammation.

Experiments were performed using forty 50-week-old male Sprague Dawley rats. After acclimating the rats to their environment for one week, obesity was induced with six weeks of a high fat diet, followed by the implementation of a 12-week aerobic and resistance exercise program (Figure 1). The rats were given ad libitum access to food and water. This study was approved by the Animal Experiment Ethics Committee of Daegutechnopark Biohealth Center (BHCC-IACUC-2018-01). Subjects were divided into normal diet (ND), normal diet + exercise (ND+Ex), high fat diet (HFD), and high fat diet + exercise (HFD+Ex) groups (n = 10 each). The high fat diet consisted of 30% carbohydrates, 50% fat, and 20% protein based on total calories. The normal diet consisted of 64.5%, 11.8%, and 23.5% carbohydrates, fats, and proteins, respectively, and contained 3.2 kcal/g.

The exercise program, focused on prevention of obesity and aging, comprised combined exercise consisting of aerobic exercise using a treadmill running [18] and resistance exercise with ladder climbing [19] for the objectives of energy consumption, improvement in cardiovascular function, and increase in muscle strength. The 12-week exercise program consisted of a total of 75 min per daily session and three sessions per week. Exercise was carried out together in one day, resistance exercise was conducted first, followed by aerobic exercise. Rats were anesthetized with Zoletil 50 (10mg/kg body weight) and 2% Rompun (0.04 mL/kg) and anterior tibialis muscles were dissected out 48 h after exercise training for protein analysis.

Data are presented as the mean ± standard error (SE). The statistically significant difference test for weight gain was performed by two-way analysis of variance (ANOVA) with repeated measures for groups and time. In the case of a significant interaction effect between groups and time, independent t-test between groups and contrast for baselines by group were conducted to determine significance. One-way ANOVA was used to test for significant differences in myokine levels between groups, and Bonferroni post hoc tests were conducted to determine significance, which was set at p < 0.05. Statistical analyses were performed with SPSS 22.0 (SPSS Inc., Chicago, IL, USA).

This research was supported by a Bisa Research Grant from Keimyung University in 2018 [grant number 20180734]. 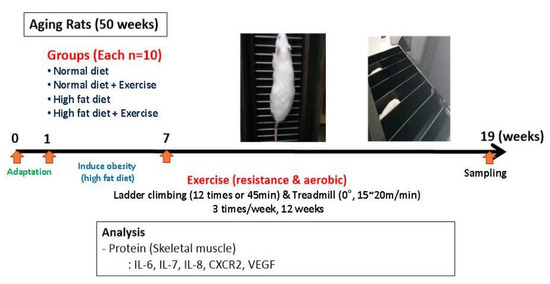