A Comparison of the Acute Effects of Different Forms of Yoga on Physiological and Psychological Stress: A Pilot Study

The coronavirus-19 (COVID-19) pandemic has created serious challenges to global health, for which face mask use is recommended as a mitigation strategy [1]. Evidence exists that the use of face masks prevents contracting and transmitting COVID-19 [2,3,4]. Surgical face masks and N-95 face masks are effective, but cloth face masks have been recommended for use by the general public in order to preserve the supply of surgical or N-95 masks for medical personnel [1]. Social distancing is recommended in the absence of face masks and a “two-meter rule” is generally recommended; however, this distance might need to be increased during vigorous exercise, where respiratory droplets may travel further during high rates of forceful respiration [5]. Wearing face masks during vigorous exercise might, therefore, be important for the prevention of spread of infectious respiratory droplets; however, the ability to exercise vigorously while wearing a face mask is a concern [6]. One hypothesis is that oxygen uptake will be compromised and that trapping of air in the face mask will increase rebreathing of carbon dioxide, leading to hypercapnic hypoxia, where an increase in arterial carbon dioxide displaces oxygen from hemoglobin [6]. Another hypothesis is that face masks will increase resistance to inspiration and respiration, thus increasing the work of breathing [6]. Exercise is effective for the prevention of obesity, diabetes, and hypertension [7,8,9], all of which are leading risk factors for complications if one contracts COVID-19 [10,11,12]. It is therefore important to determine if vigorous exercise is compromised while wearing face masks in order to make exercise prescription recommendations.
There are mixed results as to whether wearing a face mask impairs exercise performance. Participants had higher ratings of perceived exertion and slightly higher heart rate while walking at 4 km/h for 6 min on a graded treadmill (10% grade) while wearing a surgical face mask compared to when not wearing a face mask, but exercise performance per se was not assessed [13]. Maximum power reached during a progressive cycle ergometer test (where work rate started at 50 W and was increased 50 W every 3 min until exhaustion) was reduced while wearing a face mask [14]. A rubber face mask was used to evaluate gas exchange (i.e., this was placed over a surgical or N-95 mask). This effectively sealed the surgical or N-95 mask to the face, which may have made exercise more difficult with the face mask, potentially compromising external validity (i.e., the applicability of the results to a real-world setting). An additional study, again using a progressive cycle ergometer test (starting at 25 W and increasing by 25 W every three minutes until exhaustion) found no difference in time to exhaustion while wearing surgical or N-95 masks compared to a no-mask condition [15]. Nasal prongs were inserted up the nostrils to evaluate respiratory rate and end-tidal carbon dioxide during exercise. Again, this may have compromised external validity because this may interfere with the face mask.
The purpose of our study was to evaluate whether exercise performance during a progressive cycle ergometer test is impaired by wearing face masks, where no apparatus was applied to the face to assess breathing, thereby not compromising external validity. We chose to evaluate disposable surgical and non-disposable cloth face masks because these are effective for reducing the transmission of exhaled droplets [16]. They are also commercially available and are therefore commonly worn by the general public. We also evaluated both blood and muscle oxygen levels (by pulse oximetry and near-infrared spectroscopy, respectively). Given that face masks are proposed to inhibit oxygen uptake, increase carbon dioxide rebreathing, and increase work of breathing due to increased resistance to inspiration and expiration [6], our working hypothesis was that wearing a face mask during exercise would reduce blood and muscle oxygenation resulting in reduced exercise performance.

This study used a randomized counterbalanced cross-over design where 14 participants (7 men (mean ± SD): age 26.1 ± 5.8 years, mass 86 ± 12 kg, height 180 ± 5 cm, and 7 women: age 30.3 ± 10.9 years, mass 77 ± 17 kg, height 167 ± 5 cm), who participated in 288 ± 197 min of moderate to vigorous physical activity per week, were randomized to perform a progressive cycle ergometer exercise test to exhaustion while wearing a cloth face mask, a disposable surgical face mask, or no mask on three separate occasions, with at least 48 h separating conditions. Each session took place at approximately the same time of the day (±1.5 h). Randomization was performed using a computerized random number generator. The research assistant who generated the allocation schedule concealed the schedule from another research assistant who enrolled participants (i.e., this research assistant contacted the research assistant with the allocation schedule by email for the next condition each time a participant was brought in for testing).
Participants were healthy and were required to fill out the “Get Active Questionnaire” (https://store.csep.ca/pages/getactivequestionnaire) to screen for contraindications to exercise testing before being enrolled into the study. This questionnaire also allowed an assessment of weekly moderate and vigorous activity, as it has a question on the number of times moderate/vigorous activity is performed per week and typical durations of exercise sessions. This study was registered at ClinicalTrials.gov (NCT04557605). The study was approved by the University of Saskatchewan Biomedical Ethics Review Board and all participants signed a consent form prior to participating.
Sample size was calculated based on day-to-day variation (i.e., reproducibility) for peak power output generated during the progressive cycle ergometer test, and the expected decrease during conditions of mild hypoxia. The day-to-day variation, as a coefficient of variation for this test, was previously determined in nine participants as 3.8% [17]. The expected decrease in peak power output with mild hypoxia is about 5% [18]. With this coefficient of variation and expected change, we required 13 participants with an alpha value of 0.05 and power of 90% [19].
The disposable surgical mask was a 3-ply ear-loop facemask (CRC-Elm 5, Hawketree Solutions, Ottawa, ON, Canada). The cloth mask (Washable 3D Face Mask, TriMax Sports Inc., Vancouver, BC, Canada) was a 3-layer ear-loop face mask with layers composed of bamboo charcoal cloth, non-woven fabric, and Lycra (going from inner to outer layer), and was selected to represent face masks that are typically used by the general population [1,3].
The progressive exercise test was performed on a Monark Ergomedic 828E cycling ergometer (Vansboro, Sweden). The cycling protocol initially involved resting for 5 min and then performing a 5-min warm-up at a self-selected resistance, which was recorded and used on subsequent visits (face masks were worn during rest and warm-up if the participant was doing one of the face mask conditions). The starting power output on the ergometer ranged from 35 to 100 W depending on the fitness level and was increased 35 W every 2 min until volitional fatigue, with participants cycling at 70–75 revolutions per minute [17]. Starting load (power output) for each participant was recorded and replicated on subsequent conditions. Heart rate (Polar Electro, New Hyde Park, NY, USA), arterial blood oxygen saturation monitored with a pulse oximeter (Nellcor Oximax NPB40MAX, Medtronic Canada, Brampton, ON, Canada), and rating of perceived exertion (10-point scale) were recorded every 30 s. Continuous-wave near-infrared spectroscopy (NIRS; NIRO-200NX, Hamamatsu Photonics, Hamamatsu City, Shizuoka Pref., Japan) was used to measure the oxyhemoglobin content of the right vastus lateralis, as previously described [20], with values averaged every 20 s. NIRS probe placement was one-third of the distance from patella to inguinal line, with the lateral probe (approximately 4 cm) outlined on the skin with a marker to ensure consistent placement. Tissue oxygenation index, which represents absolute oxygen saturation of tissue hemoglobin expressed as a percentage, was determined by oxyhemoglobin divided by total hemoglobin.
During the exercise tests, participants were blinded to the time elapsed so that knowledge of their exercise time would not influence subsequent tests. Data were entered into a spreadsheet with conditions coded so that statistical analyses could also be performed in a blinded manner.
To control for effects of diet, previous physical activity, and sleep, participants were required to fill out a food diary and record their physical activity and sleep duration 24 h before the first exercise test. They were given a photocopy of this diary and asked to replicate as close as possible their diet, physical activity, and sleep before subsequent testing occasions.
For statistical analyses, data were analyzed using Statistica 5.0 (Chicago IL, USA). Time to exhaustion and peak power output during the tests were assessed with a one-factor repeated-measures ANOVA with “condition” (cloth face mask vs. surgical face mask vs. no mask) as the independent variable. Blood oxygen saturation, muscle tissue oxygenation index, heart rate, and rating of perceived exertion between conditions were assessed in several ways since duration of exercise tests varied across conditions. A one-factor repeated-measures ANOVA was used to compare conditions at the end of the exercise test (i.e., at exhaustion). Data were also expressed relative to peak power (i.e., percentage of peak power) and analyzed by a two-factor (i.e., percentage of peak power × condition) repeated-measures ANOVA. As a secondary analysis, “sex” was added as a between-group factor to all analyses. Bonferroni post-hoc tests were used to compare pairs of means if there were condition main effects, or condition × % peak power, condition × sex, or condition × % peak power × sex interactions. All results were expressed as mean ± SD and significance was accepted at p ≤ 0.05.

In summary, our study found no detrimental effect of wearing either a non-disposable cloth or disposal surgical face mask while exercising vigorously on exercise performance. For healthy, active people, wearing a face mask during vigorous exercise has minimal effect on arterial or muscle oxygen levels and no effects on exercise performance. This has practical significance, especially when exercising in settings where individuals might be vulnerable to contracting COVID-19, such as enclosed gyms [21], given that exercise should be encouraged for everyone during COVID-19 to reduce many of the risk factors (i.e., obesity, diabetes, and high blood pressure) that are associated with the worst COVID-19 outcomes [10,11,12]. 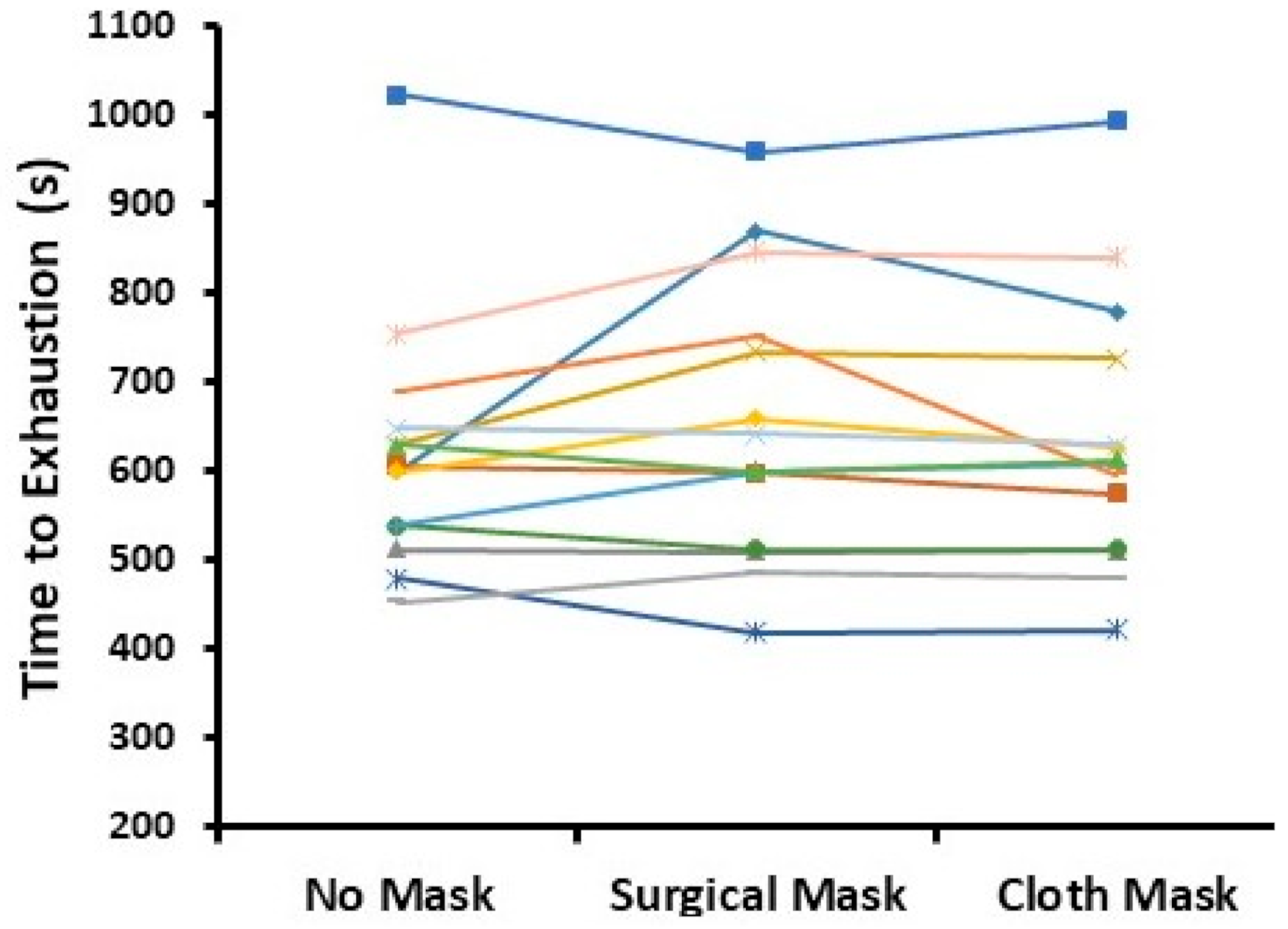 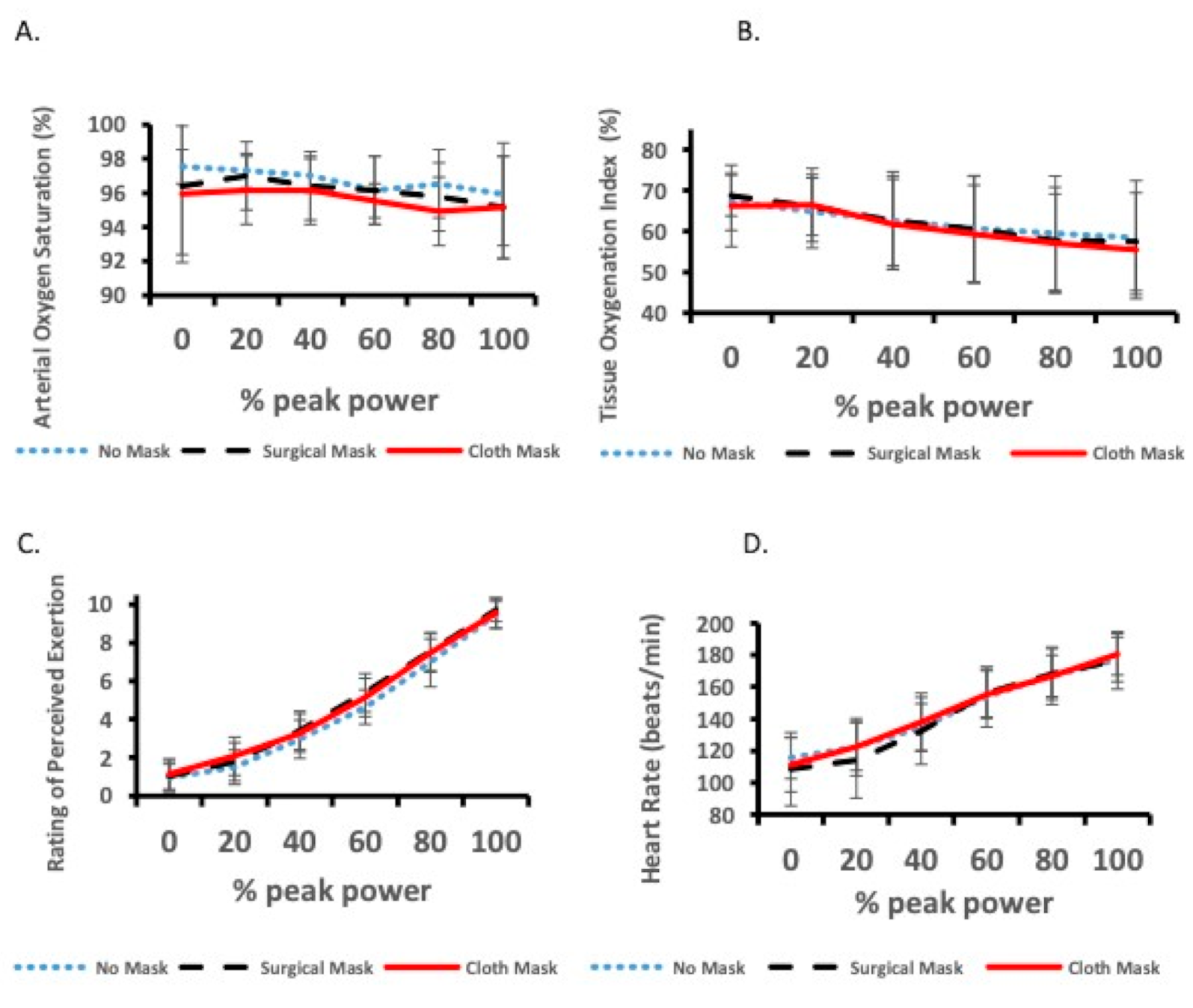