Health Care Needs and Services for Elder and Disabled Population: Findings from a Barcelona Study
Next Article in Special Issue

A Flexible Lockdown by Integrating Public Health and Economic Reactivation to Response the Crisis of COVID-19: Responses to Comments by Alvaro J Idrovo on “An Examination on the Transmission of COVID-19 and the Effect of Response Strategies: A Comparative Analysis”
Previous Article in Special Issue

Physical fitness is a necessary and crucial characteristic of tactical populations (law enforcement, military, and fire and rescue) due to the challenging and ever-changing nature of the job [1,2]. Personnel enlisted in these professions require the physical capability to successfully perform in a variety of high-risk and particularly dangerous situations [2,3]. While on duty, personnel may be required to sprint, crawl, vault over obstacles, pull or lift victims to safety and engage in life-threatening situations without notice [4,5,6].
Specialist tactical response law enforcement personnel, such as Special Weapons and Tactics (SWAT) officers, frequently resolve unique situations beyond that of general police [7]. These teams often perform high-risk tasks including tactical vehicle intercepts, warrant executions, resolve hostage situations, counter-terrorism response, water operations, counter-assault high-risk dignitary protection, rural operations and other unclassifiable, specialized tactical operations [1,3,7]. As a result, these officers frequently carry and use special weapons and tactics when threatened with arduous situations [3]. The specialized weapons and equipment carried by these officers can include semi and automatic rifles, hand guns, less lethal ammunitions, ballistic shields, body armour and breaching equipment [3], which can cumulatively weigh from 23 kg [8] up to in excess of 40 kg [9]. These loads are notably heavier than the loads of general duties law enforcement which have been reported to be approximately 10 kg [10]. It is the ability of a SWAT officer to perform advanced technical skills and tactics at higher intensities, while wearing these heavy loads, that constitutes the reason these officers are typically called on to handle the most dangerous jobs [5]. These physically demanding task requirements emphasize the need for excellent physical capacity in the specialist tactical population and can, at times, be the determinant between mission success and failure [2,6].
Research into the physical fitness of these specialist tactical response police suggests that they score higher across multiple fitness domains when compared to non-specialist tactical personnel and the general population in measures including strength, muscular endurance, flexibility, and aerobic fitness [7,11]. As an example, a critical review by Maupin et al. [11] found that elite tactical units (ETUs), inclusive of SWAT and Special Forces, score higher in push-ups, sit-ups, sit and reach assessments and have a higher relative VO2 max when compared to general police and military units. Likewise, Pryor et al. [7] found that SWAT operators ranked high in tests of muscular strength, with individuals scoring in the 90th percentile for leg press strength and in the 85th percentile for bench press.
It has been acknowledged that meeting physical fitness standards is a critical aspect of preparedness in tactical populations, especially in specialist units [2]. To ensure the readiness of this population, it is common practice that specialist police candidates pass a multitude of assessments, including both fitness measures (e.g., vertical jump, push-ups, pull-ups, and 1 RM strength measures) and job-specific skill assessments (e.g., body drags, fence climbs, and obstacle courses) [1]. Past research has demonstrated the predictive abilities of select fitness measures on task performance. For example, Lockie et al. [1] found a mild-to-moderate correlation (range r = −0.127–0.574) and predictive relationship (r2 range = 0.217–0.500) between fitness measures (e.g., push-ups, sit-ups, pull-ups, mountain climbers and aerobic fitness measures) and job-specific skill performance (e.g., 99 yard obstacle course run, chain link fence climb, solid wall fence climb, and 500 yard run) in a population of general duties police. However, how fitness measures relate to the more complex skills of specialist police while encumbered by their physical loads is yet to be investigated. Thus, the aim of this study was to investigate relationships between select measures of physical fitness and performance on a custom-designed occupational-specific physical assessment (OSPA) in specialist tactical response police candidates. This assessment was designed by the law enforcement agency to be reflective of the occupational requirements of specialist police, which could be used as an entry standard, a return to work assessment, or an annual work readiness assessment. It is hypothesized that, given the nature of the OPSA, anaerobic fitness measures will be highly related to performance in this assessment.

Data were provided in a Microsoft Excel spreadsheet and imported for analysis into Statistical Package for the Social Sciences (SPSS v.25.0, SPSS Inc., Chicago, IL, USA). Descriptive statistics (minimum; maximum; mean ± standard deviation (SD)) were calculated for each variable. Following these descriptive analyses, Pearson’s correlations, for anthropometric data and for fitness measures identified in the regression, were performed to determine the strength of relationships. Correlation strength was designated as: an r between 0 and ±0.3 was considered small; between ±0.31 and ±0.49, moderate; between ±0.5 and ±0.69, large; between ±0.7 and ±0.89, very large; and between ±0.9 and ±1 was considered near perfect [1,22]. A stepwise linear regression was conducted to determine the influence of measured fitness parameters on OSPA performance. To minimize multi-collinearity among variables, variables that had a very large (0.7+) correlation with another variable were not included in the regression. An alpha level of p < 0.05 was set a priori. A power analysis indicated that the available sample size of 18 personnel would provide 80% power to detect a moderate correlation of 0.6 between predictor variables and the outcome of interest, with an alpha level of 0.05.

The findings in this study suggest the importance of upper limb muscular strength on the performance of an OPSA in specialist police candidates. It appears that both shoulder and grip strength may play a crucial role in determining performance on a series of job-specific tasks including a dummy drag, handling a weapon and other loaded dynamic movements and may become of increasing importance if, and when, the lower body and aerobic capacity have reached a certain threshold. By implementing and tracking these select fitness measures, the ability of these officers to successfully perform occupational tasks may be enhanced.

Authors have no funding sources to declare.

The researchers would like to thank the members of the Australian law enforcement agency who contributed their time and assistance to this research project. The authors would also like to acknowledge Rodney Pope (Charles Sturt University) for his statistics guidance.

Authors have no conflicts of interest to declare. 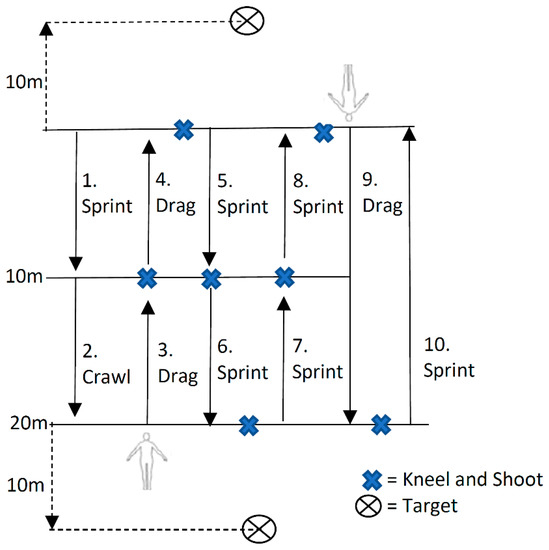