Antibiotic Resistance in Recreational Waters: State of the Science
Next Article in Special Issue

How Can One Strengthen a Tiered Healthcare System through Health System Reform? Lessons Learnt from Beijing, China

How one can reshape the current healthcare sector into a tiered healthcare system with clarified division of functions between primary care facilities and hospitals, and improve the utilization of primary care, is a worldwide problem, especially for the low and middle-income countries (LMICs). This paper aimed to evaluate the impact of the Beijing Reform on healthcare-seeking behavior and tried to explain the mechanism of the change of patient flow. In this before and after study, we evaluated the changes of outpatient visits and inpatient visits among different levels of health facilities. Using the monitored and statistical data of 373 healthcare institutions 1-year before and 1-year after the Beijing Reform, interrupted time series analysis was applied to evaluate the impact of the reform on healthcare-seeking behavior. Semi-structured interviews were used to further explore the mechanisms of the changes. One year after the reform, the flow of outpatients changed from tertiary hospitals to community health centers with an 11.90% decrease of outpatients in tertiary hospitals compared to a 15.01% increase in primary healthcare facilities. The number of ambulatory care visits in primary healthcare (PHC) showed a significant upward trend (P < 0.10), and the reform had a significant impact on the average number of ambulatory care visits per institution in Beijing’s tertiary hospitals (p < 0.10). We concluded that the Beijing Reform has attracted a substantial number of ambulatory care visits from hospitals to primary healthcare facilities in the short-term. Comprehensive reform policies were necessary to align incentives among relative stakeholders, which was a critical lesson for other provinces in China and other LMICs. View Full-Text
Keywords: health system reform; tiered healthcare system; China health system reform; tiered healthcare system; China
►▼ Show Figures 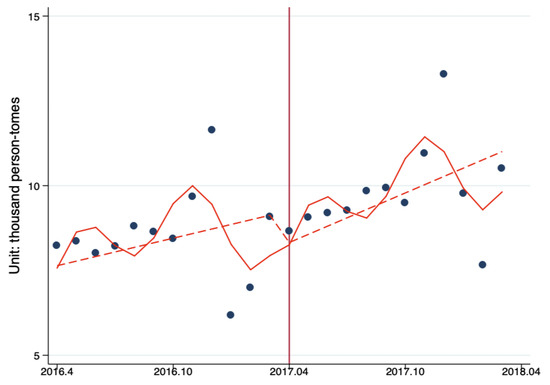