Stunting Rates in a Food-Rich Country: The Argentine Pampas from the 1850s to the 1950s
Next Article in Special Issue

Effects of Chemotherapy Treatment on Muscle Strength, Quality of Life, Fatigue, and Anxiety in Women with Breast Cancer

Approximately 40–50% of human body weight consists of skeletal muscle, which is characterized by plasticity. Skeletal muscle mass is determined by the balance between synthesis and degradation rates [1,2]. Thus, stimulating synthesis factors have an important effect on increasing muscle mass. Muscle synthesis is induced by a number of factors in the body, among which the insulin-like growth factor 1 (IGF1)/protein kinase B (Akt)/mammalian target of rapamycin (mTOR) pathway has directly been shown to increase protein synthesis [3,4,5]. The IGF1/Akt/mTOR pathway regulates cell proliferation and differentiation in adult skeletal muscle [6]. In addition, IGF1/Akt/mTOR pathway activity can also inactivate protein degradation factors such as muscle RING-finger protein-1 (MuRF1) and muscle-specific F-box protein (atrogin-1) [6,7,8]. Indeed, Akt and mTOR phosphorylation upregulated in C2C12 cell myotubes to which IGF1 was administered, and the myotube diameter increased compared to that of the control group [3]. When rapamycin, a selective mTOR inhibitor, was injected into rats with compensatory hypertrophy, their muscle mass was lower than that in similar untreated rats [6]. Moreover, in C2C12 myotubes with induced atrophy, IGF1 treatment (10 ng/mL) decreased the expression of the atrophy markers atrogin-1 and MuRF1, increasing the myotube diameter [7]. Therefore, to increase the muscle mass, it is necessary to regulate the balance between the factors driving protein synthesis and degradation.
Lactate has been traditionally recognized as a fatigue-associated molecule because early reports indicated that lactate is produced by anaerobic glycolysis and induced muscular acidosis [9,10]. However, the understanding of lactate has changed in recent decades, and its roles as an efficient energy resource [11,12] and a potential factor associated with exercise-induced muscle adaption [13] have been reconsidered.
Interestingly, several recent studies have shown positive effects of lactate on protein synthesis. In vitro, Ohno et al. [14] reported that C2C12 cells treated with 20 mM lactate had increased protein content and myonucleus number. Oishi et al. [15] also reported the effects of lactate-based supplementation on C2C12 cells. In their study, treatment with 10 mM lactate and 5 mM caffeine for 6 h increased the satellite cell activity and anabolic signals. In vivo, acute intraperitoneal injection of lactate (3 g/kg) increased the blood lactate levels to approximately 20 mmol/L after 5 min, and increased the phosphorylation of Akt (Thr308 and Ser473) and ribosomal protein S6 kinase beta-1 (p70S6K), which is downstream of the IGF1/Akt/mTOR-pathway, in the quadriceps muscle after 40 min [16]. In addition, 1 g/kg lactate administrated mice showed a supplemental effect on tibialis anterior weight and muscle fiber cross-sectional area [14]. These findings revealed that lactate administration might increase the levels of factors driving protein synthesis.
However, to date, little research has been conducted regarding the effects of lactate on muscles. Before using lactate as a dietary supplement, the effects of its oral administration on muscles need to be confirmed. Most studies have involved in vitro treatment, although some in vivo studies have employed intraperitoneal injection for lactate supplementation. Moreover, most previous studies have focused only on the effect of lactate on protein synthesis factors. However, a recent study reported that lactate overload may cause muscular atrophy in C2C12 myotubes [17]. Finally, data from previous studies have shown that exogenous lactate can increase blood lactate concentrations over time [14,16,18]. Nevertheless, no studies of the changes in protein synthesis factors following lactate administration over time (e.g., 0, 30, 60, and 120 min) have been reported. Because the timing of lactate administration is important for its use as a supplement, it is necessary to confirm the relevant changes over time.
The central hypothesis of this study was that exogenous lactate administration produces different responses in a time-dependent manner and can induce protein synthesis. To test this hypothesis, we administered lactate to rats, analyzed the mRNA and protein expression of protein synthesis- and protein degradation-related factors in skeletal muscles, and evaluated the blood factors in plasma.

The animals were cared for as previously reported [19,20,21]. Male Sprague–Dawley rats (7 weeks of age) were obtained from Raon Bio (Korea). The rats were housed in standard cages under controlled conditions (50% humidity, 23 ± 1 °C, and an alternating 12 h light–dark cycle). The rats were fed ad libitum with a commercial normal diet (65% carbohydrate, 12% fat, and 14% protein). The animal experiment was conducted as per the ethical guidelines of the Animal Experiment Research Center of Konkuk University. This study was also conducted in accordance with the ethical guidelines of the Konkuk University Institutional Animal Care and Use Committee (No. KU18137).

Thirty-two rats were used in the study. They were randomly divided into 4 groups that were sacrificed at 0 min (control group), 30 min, 60 min, or 120 min after lactate administration with an oral sonde (Figure 1) at a concentration of 2 g/kg [22,23]. All rats were fasted for 2 h before lactate administration and were euthanized by vertebral dislocation at the predetermined time points. Immediately after sacrifice, 3 mL blood samples were obtained from the arteries, and skeletal muscle tissues (plantaris) were quickly removed, frozen in liquid nitrogen, and stored at −80 °C until analysis.

We performed RT-PCR to determine the expression levels of mRNAs of interest. The mRNA obtained from the right plantaris was used to measure the expression levels of glyceraldehyde 3-phosphate dehydrogenase (GAPDH) and five other factors. Total RNA was extracted from the plantaris using QIAzol Lysis Reagent (79306; Qiagen, Hilden, Germany). We synthesized complementary DNA (cDNA) from total RNA using amfiRivert cDNA Synthesis Platinum Master Mix (R5600; GenDEPOT, Katy, TX, USA). We then performed the RT reaction using the following protocol: annealing for 5 min at 25 °C, extension for 50 min at 42 °C, and RT inactivation for 15 min at 70 °C. For RT-PCR, cDNA was amplified with amfiEco Taq DNA polymerase (P0701; GenDEPOT, Katy, TX, USA) and the following primer pairs: IGF receptor-F and -R; Akt-F and -R; mTOR-F and -R; MuRF1-F and -R; and atrogin-1-F and -R (Table 1). We then examined the expression levels of the protein synthesis-related factors IGF receptor, Akt, and mTOR, and the protein degradation-related factors MuRF1 and atrogin-1. The cycling conditions were as follows: an initial denaturation for 2 min at 94 °C, followed by 25–40 cycles of 15 s at 94 °C, 30 s at 50–70 °C, and 1 min at 72 °C. Finally, we separated the products on 1% agarose gels and visualized them using the Safe-Pinky DNA gel-staining solution (S1001-025; GenDEPOT, Katy, TX, USA).

All data were analyzed using the IBM SPSS statistics software package (version 25). Statistical differences in the IGF receptor, Akt, mTOR, MuRF1, and atrogin-1 mRNA-expression levels, as well as the protein levels of Akt and mTOR phosphorylation and the levels of different blood (plasma) components (lactate, insulin, IGF1, and glucose) were determined by one-way analysis of variance, followed by Bonferroni’s test. Probability values of <0.05 were considered to reflect statistically significant differences.

To investigate the effect of lactate administration on skeletal muscles, we analyzed the mRNA levels of the protein synthesis markers, namely the IGF receptor, Akt, and mTOR (Figure 3); these showed increased expression levels. Figure 3B shows that lactate administration significantly increased IGF receptor expression at 60 min compared to that at the other times (60 min vs. 0 min and 30 min, p < 0.05; 60 min vs. 120 min, p < 0.001). Akt expression (Figure 3C) significantly increased at 30, 60, and 120 min (p < 0.001, in each case), three- to four-fold, when compared to that at 0 min. Moreover, the expression of mTOR (Figure 3D) was significantly higher at 60 min than at 0 min (p < 0.05). We also examined the expression levels of two major factors, MuRF1 and atrogin-1, to confirm the effects of lactate administration on protein degradation (Figure 4). However, no significant changes in the expression of the factors related to protein degradation were observed at any time point.

3.3. Protein Expression of Akt and mTOR

This work was supported by the Ministry of Education of the Republic of Korea and the National Research Foundation of Korea, grant number NRF-2019S1A5A8033825. 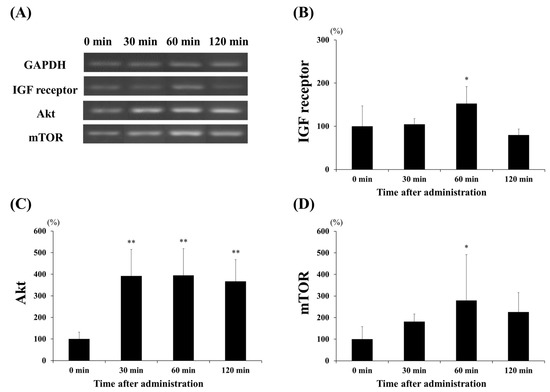 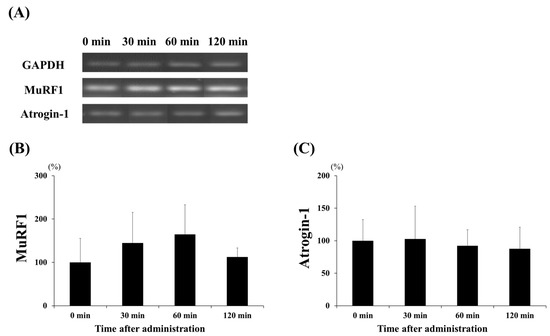 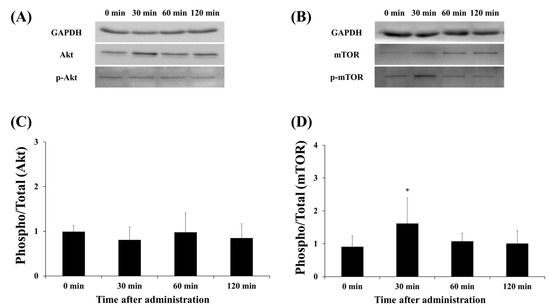 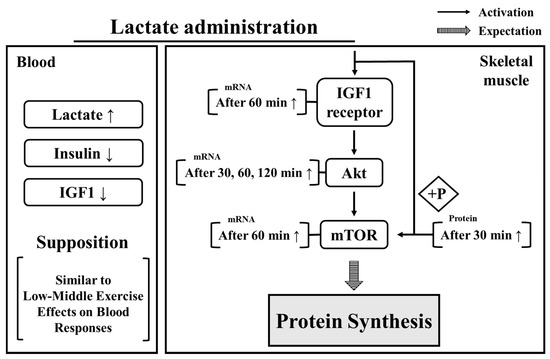 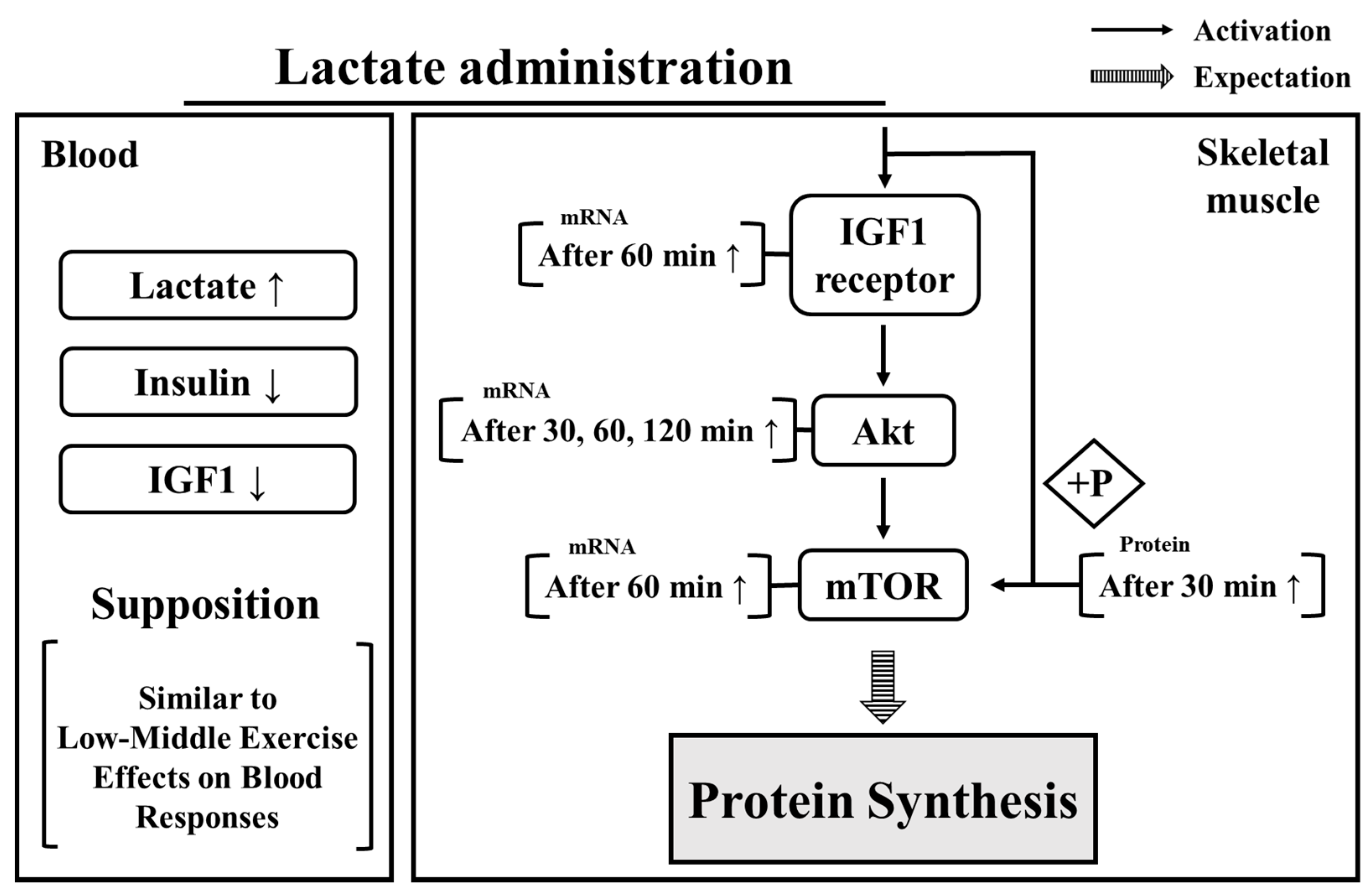