Stunting Rates in a Food-Rich Country: The Argentine Pampas from the 1850s to the 1950s

Little is known about the effects of malnutrition rates in the long-run. Applying the methodology recommended by the World Health Organization, this study estimates stunting rates for Argentine adult males from the 1850s to the 1950s. We use five large samples of army recruits, prison inmates, militiamen, and electoral records totaling 84,500 cases. These samples provide information about height in Buenos Aires province and the Pampa region, the most fertile, food-producing area of the country. As the study shows, estimated stunting rates remained stable from the 1850s to the 1880s and then declined persistently until the 1950s. The total decline was substantial: if fell from 15.3% in the 1870s to 5.6% in the 1940s, then stagnated. In this 95-year period, stunting rates went from “medium” to “low” levels in the WHO classification of malnutrition intensity. At the end of our study period (the 1950s) the Pampa’s malnutrition rate was only 3.5 to 4 percentage points above contemporary estimates for well-developed economies in Europe and North America. A significant expansion in the region’s production of grains and beef (food availability), combined with a sustained decline in infant mortality (increased health) were probably the two main underlying factors of this long-tern reduction in malnutrition. Yet, this association remains to be determined. View Full-Text
Keywords: anthropometric history; stunting rates; malnutrition; food-production; Argentina anthropometric history; stunting rates; malnutrition; food-production; Argentina
►▼ Show Figures 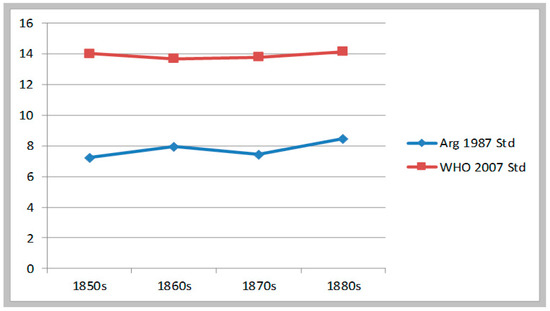