Associations between Physical Activity and Comorbidities in People with COPD Residing in Spain: A Cross-Sectional Analysis
Next Article in Special Issue

The Effect of Respiratory Muscle Training on the Pulmonary Function, Lung Ventilation, and Endurance Performance of Young Soccer Players

The aim of this study was to examine the effects of the motivational climate created by the coach and perceived by a group of young, high-performance handball players on their fear of failure and precompetitive anxiety. The study participants were 479 young handball players. The age range was 16–17 years old. Players were administered a battery composed of a Perceived Motivational Climate in Sport Questionnaire, a Performance Failure Appraisal Inventory, and Competitive State Anxiety Inventory-2R, to measure the aforementioned theoretical constructs. Using structural equation modelling (SEM), the results showed that the handball players experienced high levels task-involving climate and moderate values of self-confidence. In contrast, players experienced lower levels of ego-involving climate, fear of failure, and cognitive and somatic anxiety. The obtained model shows that fear of failure positively mediates the association between an ego-involving climate with both cognitive and somatic anxiety, and negatively in terms of self-confidence. In contrast, fear of failure does not mediate the associations between a task-involving climate and both somatic and cognitive anxiety and self-confidence. View Full-Text
Keywords: coach; motivation; team sports; failure; well-being; performance coach; motivation; team sports; failure; well-being; performance
►▼ Show Figures 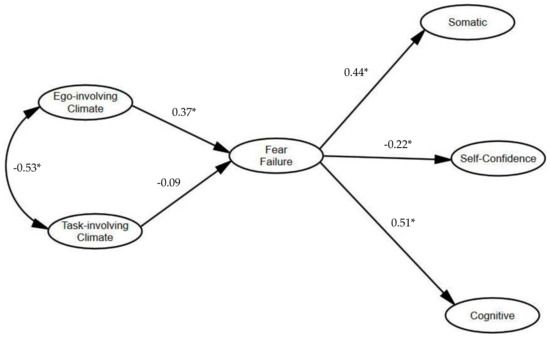