The WHO and UNICEF Joint Monitoring Programme (JMP) Indicators for Water Supply, Sanitation and Hygiene and Their Association with Linear Growth in Children 6 to 23 Months in East Africa
Next Article in Special Issue

Stunting Rates in a Food-Rich Country: The Argentine Pampas from the 1850s to the 1950s
Previous Article in Journal

The Prevalence of Anticholinergic Drugs and Correlation with Pneumonia in Elderly Patients: A Population-Based Study in Taiwan
Previous Article in Special Issue

Regional Disparities in the Decline of Anemia and Remaining Challenges among Children in Tanzania: Analyses of the Tanzania Demographic and Health Survey 2004–2015

This article contributes to the study of inequality in the biological welfare of Chile’s adult population during the nitrate era, ca. 1880s–1930s, and in particular focuses on the impact of socioeconomic variables on height, making use of a sample of over 20,000 male inmates of the capital’s main jail. It shows that inmates with a university degree were taller than the rest; that those born legitimate were taller in adulthood; that those (Chilean born) whose surnames were Northern European were also taller than the rest, and in particular than those with Mapuche background; and that those able to read and write were also taller than illiterate inmates. Conditional regression analysis, examining both correlates at the mean and correlates across the height distribution, supports these findings. We show that there was more height inequality in the population according to socioeconomic status and human capital than previously thought, while also confirming the importance of socioeconomic influences during childhood on physical growth. View Full-Text
Keywords: anthropometry; Chile; prison records; human capital; inequality anthropometry; Chile; prison records; human capital; inequality
►▼ Show Figures 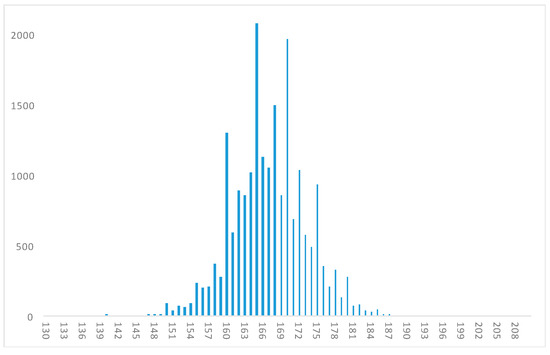