The proportion of females participating in long-distance races has been increasing in the last years. Although it is well-known that there are differences in how females and males face a marathon, higher research may be done to fully understand the intrinsic and extrinsic factors affecting sex differences in endurance performance. In this work, we used triaxial accelerometer devices to monitor 74 males and 14 females, aged 30 to 45 years, who finished the Valencia Marathon in 2016. Moreover, marathon split times were provided by organizers. Several physiological traits and training habits were collected from each participant. Then, we evaluated several accelerometry- and pace-estimated parameters (pacing, average change of speed, energy consumption, oxygen uptake, running intensity distribution and running economy) in female and male amateur runners. In general, our results showed that females maintained a more stable pacing and ran at less demanding intensity throughout the marathon, limiting the decay of running pace in the last part of the race. In fact, females ran at 4.5% faster pace than males in the last kilometers. Besides, their running economy was higher than males (consumed nearly 19% less relative energy per distance) in the last section of the marathon. Our results may reflect well-known sex differences in physiology (i.e., muscle strength, fat metabolism, VO2max), and in running strategy approach (i.e., females run at a more conservative intensity level in the first part of the marathon compared to males). The use of accelerometer devices allows coaches and scientific community to constantly monitor a runner throughout the marathon, as well as during training sessions. View Full-Text
Keywords: accelerometry; sex; physical activity; running intensity; energy consumption; pacing; marathoners; running economy accelerometry; sex; physical activity; running intensity; energy consumption; pacing; marathoners; running economy
►▼ Show Figures 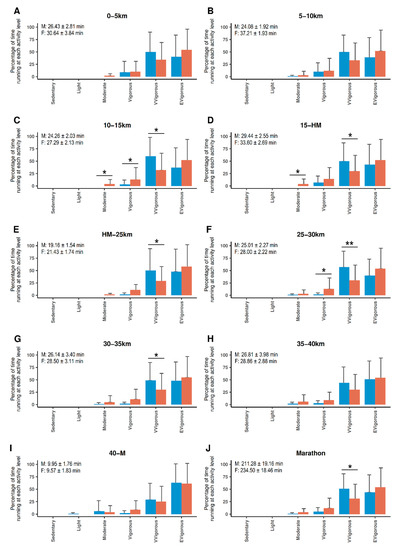