Perceptions of Light Pollution and its Impacts: Results of an Irish Citizen Science Survey
Previous Article in Journal

This study sought to answer the question of whether level of need for cognitive closure (NCC) plays a role in climate change worry (CCW), and whether this relationship is mediated by political views. Additionally, we wanted to explore potential relationships between each of these variables and level of support for various climate solutions.

In order to investigate these questions, a survey was distributed online via the Qualtrics platform to undergraduate and graduate students at the University of Georgia. As an incentive for participation, students were offered the chance to enter for a drawing of one of five $40 Amazon gift cards. The survey contained four scales, measuring participants’ levels of need for cognitive closure, levels of worry about climate change, levels of support for various climate change solutions, and both the social and economic aspects of their political beliefs. Demographic questions, including gender identification, race, religion, and age were asked at the end of the survey. The University of Georgia (UGA) is a public university in Athens, Georgia, with approximately 30,000 enrolled undergraduate students. Students are mostly white, with Asians, African-Americans, and Hispanics making up most of the rest of the student body. Table A5 and Table A6 in the appendix provide information on the ethnic and religious diversity of our sample. There are approximately 5000 more female-identifying undergraduates than male-identifying. The University of Georgia is involved in the Georgia Initiative for Climate and Society, has a Climate Action Planning Task Force, and runs an Office of Sustainability. Although not all UGA students will encounter climate-change-related information and action during their studies, the university displays a commitment to climate action (ethical approval number: PROJECT00000650, date 18 June 2019).
The 15-item NCC Scale with Weights, created by Roets and Van Hiel [14], was used to measure respondents’ levels of need for cognitive closure. This scale was chosen because it assesses all dimensions of a person’s NCC level while reducing the number of questions from the 41 in their modification of the original scale to a more manageable—15 [6,15]. This allows for multiple scales to be used in this survey without requiring respondents to answer a cumbersome number of questions. Questions in the 15-item NCC Scale with Weights are rated on a 6-point Likert scale from 1 = Strongly Disagree, to 6 = Strongly Agree. Their responses are summed, and higher sums indicate higher NCC. The test-retest stability of this scale is 0.79, and the Cronbach’s alpha is 0.89, which is comparable to the original 41-item scale’s 0.9. Additionally, there is no difference in scale means between the 41-item and 15-item scales [15].
The Climate Change Worry Scale, developed by Stewart [16] was used to measure respondents’ level of concern regarding climate change and its effects. This is a 10-item scale that assesses how often respondents have worries regarding climate change and its effects. Participants indicate how frequently each item, in the form of a statement, applies to them on a five-point Likert scale ranging from 1 = Never to 5 = Always. The Cronbach’s alpha for this scale is 0.95.
Climate change solution support was measured using questions from the Yale Program on Climate Change Communication’s surveys on which their Climate Opinion Maps are based [2]. Eight questions were chosen from the original list of sixteen. This subset was chosen to focus on specific items related to the scale of various climate mitigation actions (i.e., federal, local, and personal), and to limit the number of questions in the survey so that participant fatigue could be minimized. The Cronbach’s alpha of this scale is 0.79.
Respondents self-reported their social and economic political conservatism, respectively, on a scale ranging from 1 = Very Liberal, to 7 = Very Conservative. Self-reporting was chosen to minimize the number of questions in the survey, and to make the distinction between social and economic conservatism easy to find within the data. These questions had been previously used by Cacciatorie, Scheufele, and Corley in their 2011 study [17].

The first step in analyzing survey results was to look at first-order correlations between each of the variables studied. These relationships were considered significant at α = 0.05. Following the analysis procedure of Panno et al. [10], these indicators of simple relationships were then used to inform the creation of mediation models. Detailed information can be found in the Supplementary Materials.
A number of different mediation models were created for the first part of this study. Mediation models were used following the example of Panno et al. [10]. While Panno et al. went to a regular regression model before mediation, we were able to move straight to mediation models based on their findings [10]. The first, and most broad model involved CCW and NCC mediated by overall political conservatism for both men and women. This model was subsequently broken down, due to differences between the genders previously noted in the literature [10]. The second set of mediation models depicted the relationship between NCC and CCW as mediated by overall conservatism for men and women, respectively. Finally, a third set of models was created based on Panno et al.’s finding that the social dimension of conservatism played a larger role in the NCC/pro environmental attitude relationship. This third set contained models of the NCC/CCW relationship as mediated by social conservatism for both men and women separately, and economic conservatism for both men and women separately. In total, seven mediation models were a part of this analysis. Coefficients in these models were considered significant at α = 0.05. These models were created in R (version 2.3, R Fundation for Statistical Computing: Vienna, Austria,2006), an open-source statistical software, using the psych, expss, diagram, and lavaan packages.
The second part of this study investigated relationships between level of need for cognitive closure, dimensions of conservatism, and climate change worry with level of support for personal versus governmental climate change solutions. First order correlations between each of these variables were calculated, and similarly to the first part of this study, were used to inform the creation of mediation models. These models were created for the relationship between NCC and personal/government solution support, mediated by overall, social, and economic conservatism, separated between men and women. A total of twelve mediation models were built to analyze each of these relationships. We chose these models because level of support for climate solutions is more behavioral than climate change worry—this allowed us to bring a behavioral aspect to the study, in a similar manner to Panno et al. [10]. R (version 2.3) was again used to create these models, using the psych, expss, lavaan, car, and diagram packages.
In both of these studies, a Sobel test was used to determine which mediation effects were significant. The Sobel test is a special form of a t-test that is used to determine whether there is a statistically significant difference between the direct effect of an independent variable on the dependent variable, and the effect when the mediator is taken into account. This test was chosen because of its wide usage and acceptance in mediation research. The Sobel Test was run using a website widget, which can be found at http://quantpsy.org/sobel/sobel.htm.

We received approximately 1100 responses to the survey. Of these participants, 731 were women, 363 were men, and 17 were other/non-binary/preferred not to answer. Respondents were 70% white, 6.5% Latinx, 6.6% black/African-American, and 11.3% Asian/Pacific Islander (5.9% other/prefer not to answer). Most respondents were either in the center of the political spectrum or slightly left of center (more liberal); however, the political spectrum overall was fairly well-represented (51% of the sample on the left, 49% on the right, see Figure 1). Respondents tended towards slightly higher levels of NCC, shown by the slight left skew of the histogram in Figure 2. Level of climate change worry showed a very large spread, with a drop-off at higher scores (Figure 3).

Figure 6 shows correlations between climate change worry, need for cognitive closure, conservatism (overall, social, and economic), and support for both government-based and personal climate solutions. One thing to note from these correlations is that the coefficient for climate change worry and government-based solutions is close to twice that of climate change worry and personal actions (0.56, 0.33). Correlations between need for cognitive closure and these variables were small (i.e., −0.09, 0.02), while correlations between conservatism and solution support were larger (i.e., −0.26, −0.55). To further investigate these relationships, we created models representing the relationships between need for cognitive closure and solution support mediated by the dimensions of conservatism. Table A3 in the appendix shows the coefficients of each of these models.
Both men and women show an interesting difference in b coefficients between solutions. The b coefficients for government solutions are larger than for personal actions. For example, in the social conservatism mediator/government solution model, the women’s and men’s coefficients are both −0.54. In the social conservatism mediator/personal solution model, the men’s b coefficient is −0.25, and the women’s is −0.27. The a coefficients are also fairly similar across genders—NCC and social conservatism is 0.13 for women and 0.17 for men, for example. However, these models exhibit the same partial mediation vs. suppression difference between genders as the previous NCC/CCW models. All types of conservatism function as suppressors in the men’s models. For women, all types of conservatism are partial mediators. Only the effects on government solution support are significant, as shown by Table A4 in the appendix. Table A4 shows that only government-based solutions exhibit a significant conservatism-mediated/suppressed relationship with need for cognitive closure. These significant models are included with the figures in Appendix A (Figure A1, Figure A2, Figure A3, Figure A4, Figure A5 and Figure A6; Table A1,Table A2, Table A3,Table A4, Table A5 and Table A6).

This research received no external funding. Margaret Orr completed this research as part of an MS degree in Geography at the University of Georgia, where she was funded by a Teaching Assistantship.

The authors wish to thank the Geography Department at the University of Georgia for providing TA funding for this research to take place. We also thank Master’s committee members Glen Nowak and Gabe Kooperman for their help in this project. Finally, we thank the reviewers for their helpful feedback. 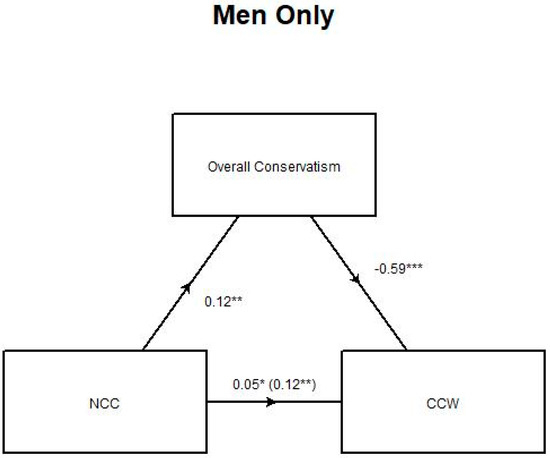 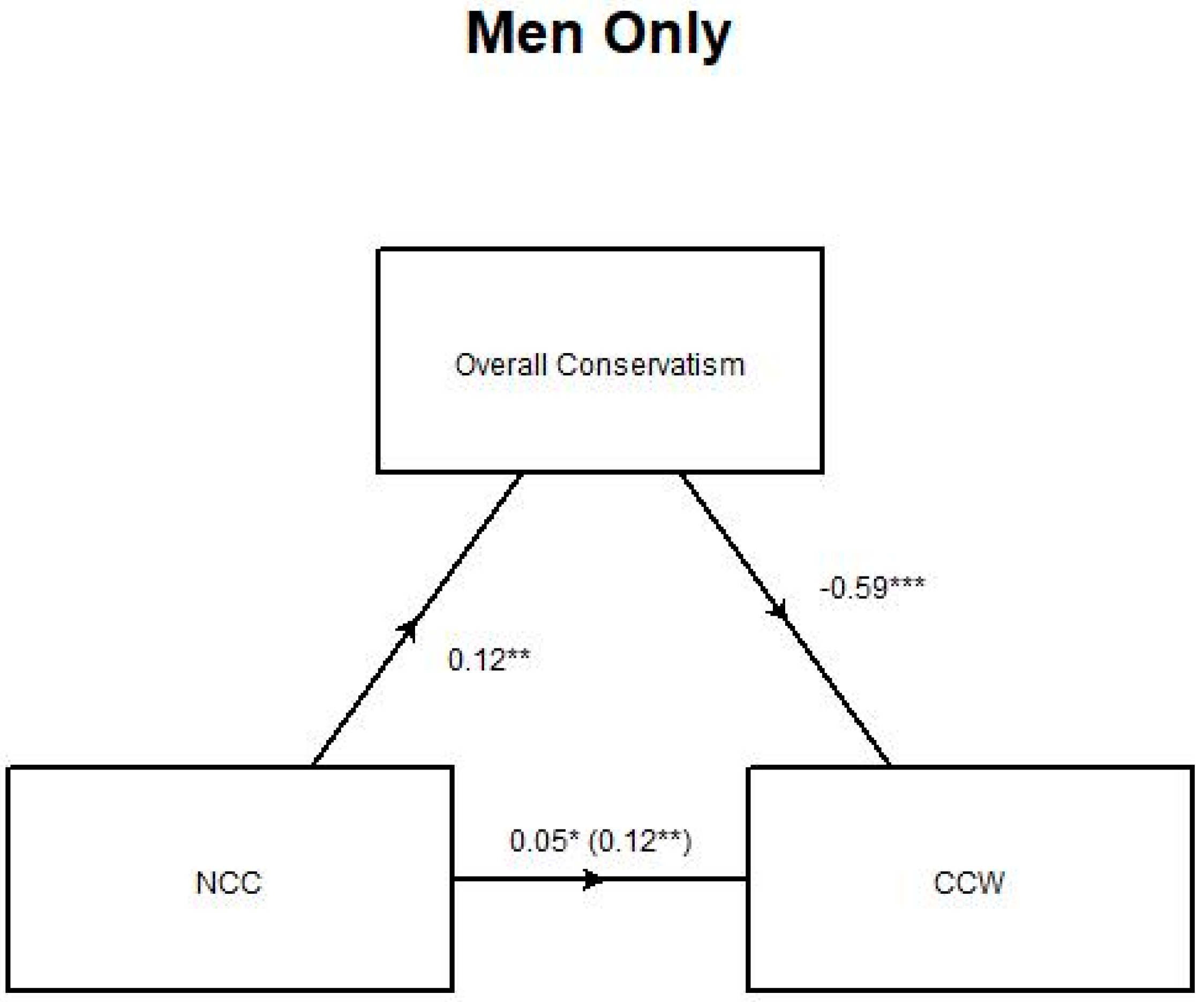 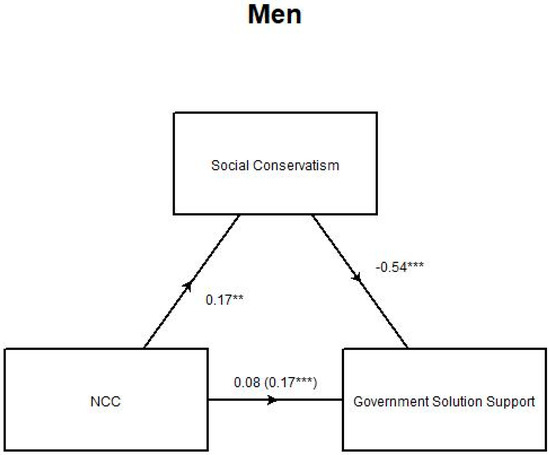 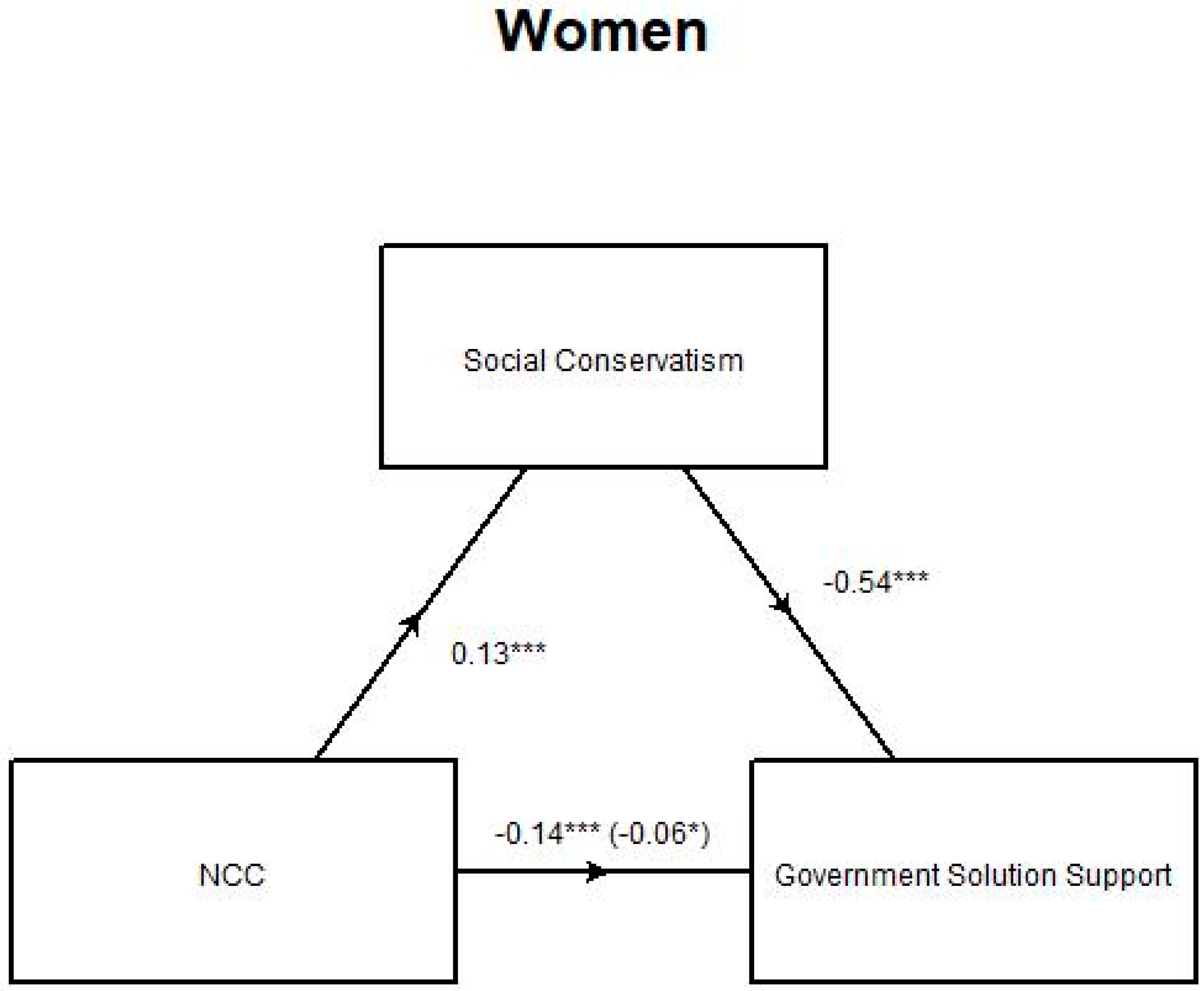 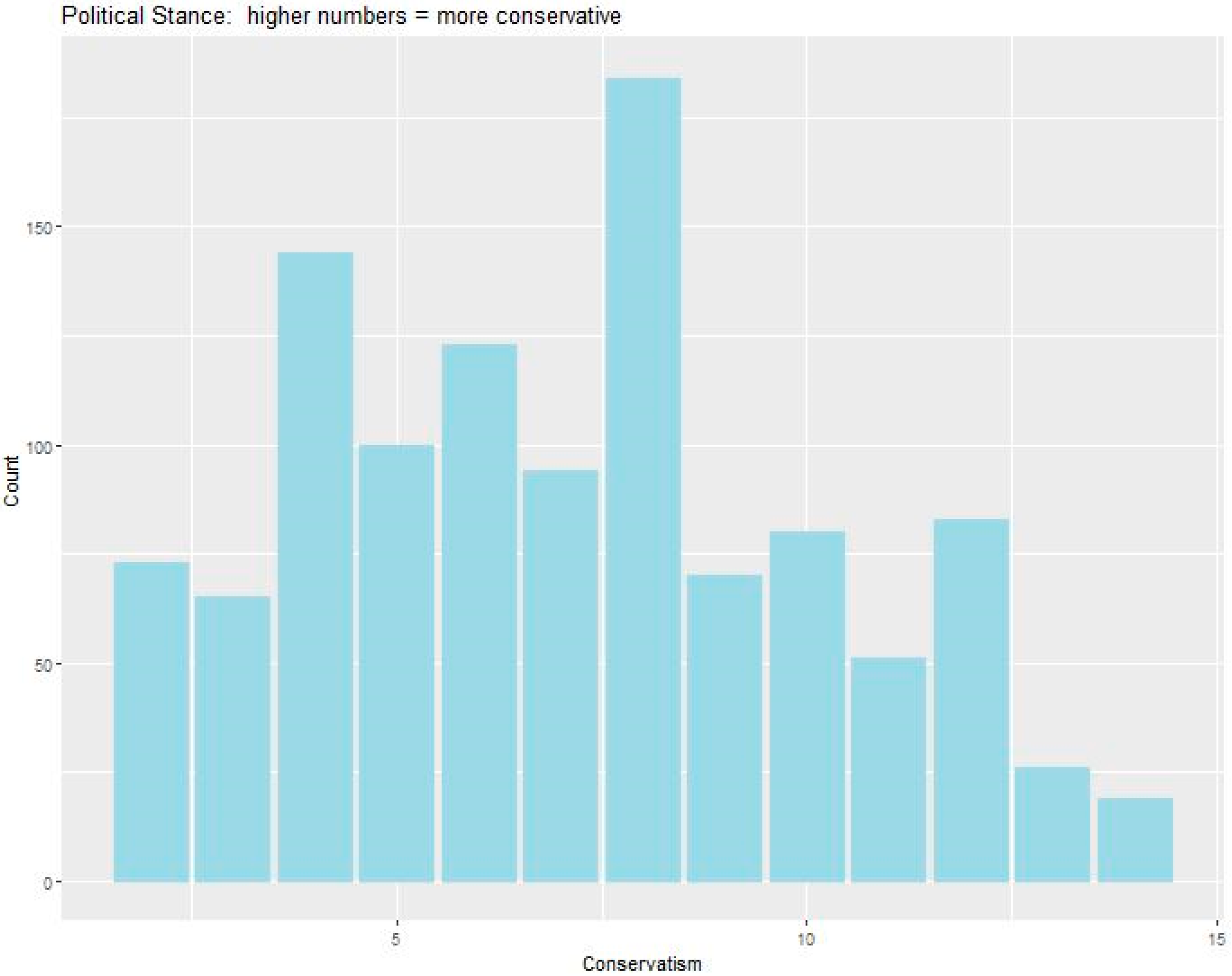 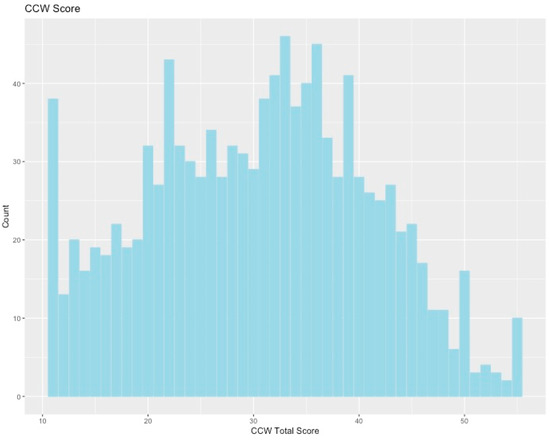 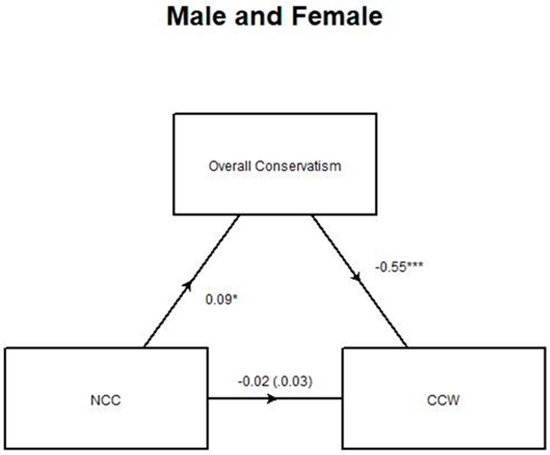 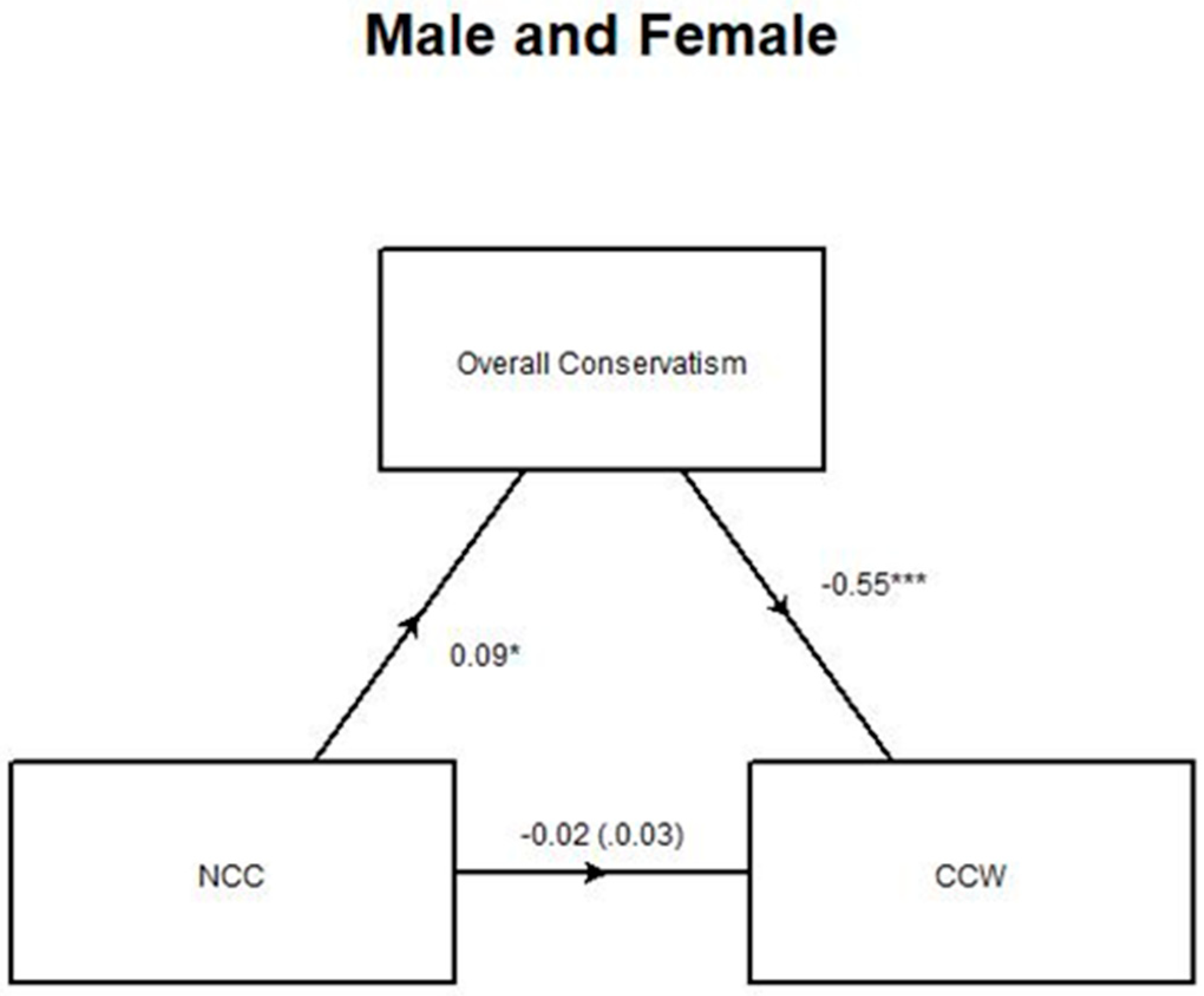