Sleep Pattern Changes in Nursing Students during the COVID-19 Lockdown

Perceptions of Light Pollution and its Impacts: Results of an Irish Citizen Science Survey

Background: Light pollution is increasingly an area of concern for health and quality of life research. Somewhat surprisingly, there are relatively few descriptions of perceptions of light pollution in the literature. The current study examined such perceptions in a Irish sample. Methods: A survey was circulated as part of a citizen science initiative of a national newspaper; the survey included questions regarding night sky brightness and the impact of light at night on sleep and animal behaviour. Complete responses from 462 respondents were analysed. Results: Urban location was, as anticipated, associated with reported brighter night skies, and public lighting was reported as the main source of light at night for urban settings, whilst neighbours’ domestic lighting was the most commonly reported source for rural settings. Respondents from rural settings were more likely to report that light at night impinged on sleep, whilst city dwellers were more likely to report recent changes in wildlife behaviour. Conclusions: Citizen science approaches may be useful in gathering data on public perceptions of light pollution and its impacts. In the current study, this perception was strongly influenced by location, highlighting the importance of assessing experiences and attitudes across a number of geographical settings. View Full-Text
Keywords: artificial light; wildlife; sleep; public perceptions; citizen science artificial light; wildlife; sleep; public perceptions; citizen science
►▼ Show Figures 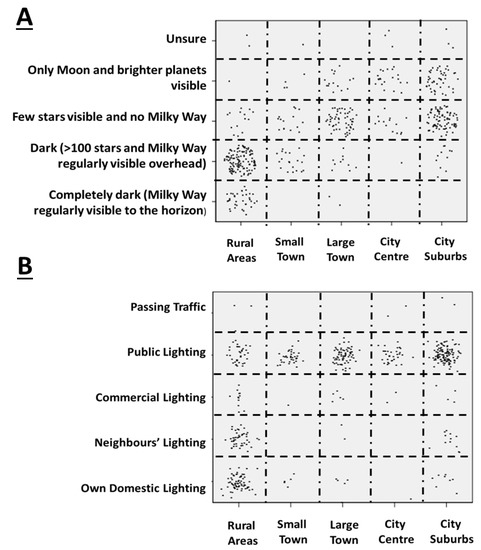