Sexual Activity in Heart Failure Patients: Information Needs and Association with Health-Related Quality of Life
Next Article in Special Issue

In the United States (U.S.), up to 14% of the population depend on private wells as their primary drinking water source. The U.S. government does not regulate contaminants in private wells. The goals of this study were to investigate the quality of drinking water from unregulated private wells within one mile (1.6 kilometers) of an effluent-dominated river in the arid Southwest, determine differences in contaminant levels between wet and dry seasons, and identify contributions from human sources by specifically measuring man-made organic contaminants (perfluorooctanoic acid (PFOA), perfluorooctane sulfate (PFOS), and sucralose). Samples were collected during two dry seasons and two wet seasons over the course of two years and analyzed for microbial (Escherichia coli), inorganic (arsenic, cadmium, chromium, copper, lead, mercury, nitrate), and synthetic organic (PFOA, PFOS, and sucralose) contaminants. Arsenic, nitrate, and Escherichia coli concentrations exceeded their respective regulatory levels of 0.01 mg/L, 10 mg/L, and 1 colony forming unit (CFU)/100 mL, respectively. The measured concentrations of PFOA and PFOS exceeded the respective Public Health Advisory level. Arsenic, PFOA, PFOS, and sucralose were significantly higher during the dry seasons, whereas E. coli was higher during the wet seasons. While some contaminants were correlated (e.g., As and Hg ρ = 0.87; PFOA and PFOS ρ = 0.45), the lack of correlation between different contaminant types indicates that they may arise from different sources. Multi-faceted interventions are needed to reduce exposure to drinking water above health-based guidelines. View Full-Text
Keywords: arsenic; Escherichia coli; PFOA; PFOS; private well water; sucralose; water quality arsenic; Escherichia coli; PFOA; PFOS; private well water; sucralose; water quality
►▼ Show Figures 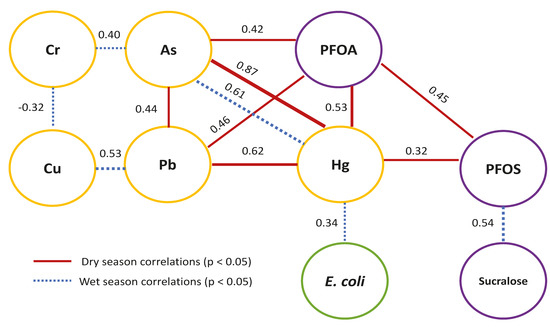