Factors Associated with Knowledge, Attitude and Practices of Common Eye Diseases in General Population: A Multicenter Cross-Sectional Study from Pakistan

High prevalence of blindness coupled with low public awareness of eye diseases is a severe problem in Pakistan. The objective of this study was to evaluate the awareness, attitude and practices related to common ocular problems and eye care use among general population of Punjab, Pakistan. Data were collected cross-sectionally, using random selection of participants from five districts of Punjab, Pakistan. A pre-tested questionnaire was used to collect the data from January to March 2017. The ordinal data were converted to interval--based data by Rasch analysis, which is termed as “knowledge score” and ranges from −3 to +3. Descriptive statistics, linear regression, binary logistic regression and chi square analysis were performed to evaluate the data. Of the 2073 people contacted, 96.4% (2019) responded the interviewer. The mean (SD) age was 39.9 (11.4) years, majority were males (64.8%) and only 3.1% were illiterate. The majority (68.1%) of respondents were aware that blindness can be prevented and are least aware of age-related macular degradation (31.4%). Multivariate analysis to knowledge scores demonstrated that male gender (β = 0.53 95%CI = 0.39, 0.66, p < 0.001), higher education (β = 0.31 95%CI = 0.25, 0.37, p < 0.001) were significantly associated with knowledge score. Eighty-two percent of our respondents had a positive attitude towards health-seeking behavior and those who had adequate income on most of occasions were 1.82 (AOR = 1.82 95%CI = 1.26, 2.62 p = 0.001) times more prone towards health-seeking behavior than those who had insufficient income. Out of all respondents, 21.5% had an eye examination at least once a year and this frequency was significantly higher in lower age, females, high education and high Socio Economic Status level (p < 0.05). Among the general population of Pakistan, awareness about prevention of blindness and refractive error was optimum, while awareness of blindness causing eye conditions, like age-related macular degradation was low. Intensive improvements in the health literacy and public interventions—specifically in old age people, males and respondents with lower education—are urgently needed. View Full-Text
Keywords: knowledge; attitude; practice; eye disease; Punjab Pakistan knowledge; attitude; practice; eye disease; Punjab Pakistan
►▼ Show Figures 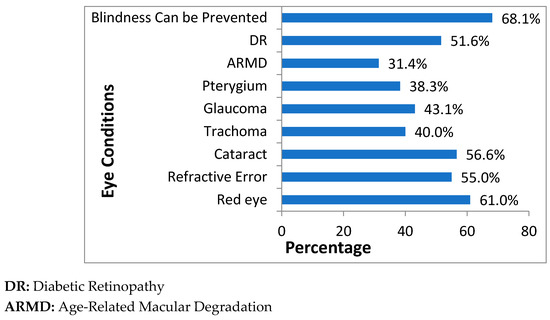